The Spider is an athletic male, a stealthy and masterful climber and a fair hand-to-hand combatant. His forte is with weapons, and psychological warfare by the use of fear, surprise and aggressiveness.

Strangely, it seems that he has near superhuman durability and recovering abilities. These are powered either by his own fanaticism or by an external mystical source. In DC Heroes RPG terms, when down and dying, he will spend Hero Points  to call in reinforcements using his Schtick or do a Desperate Recovery Roll. 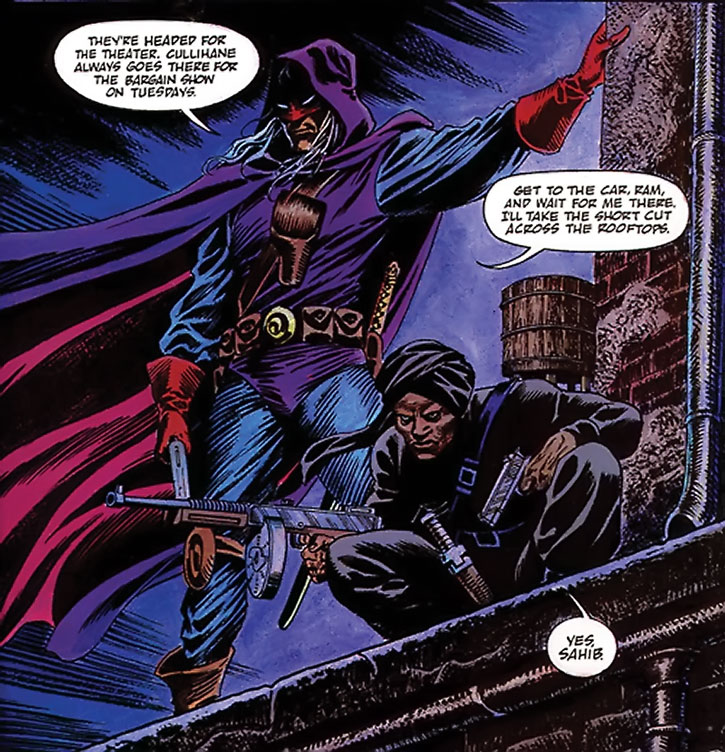 The Spider’s weapons of choice are a set of blued steel .45 semi-automatics. He is a dead shot, and mows down the hardest of opposition with relative ease. He also shoots his own “web” with the Weblee gun, a coil of nylon rope which though thin as a pencil could hold several hundred pounds weight.

When close up he will switch to using his katana to swiftly cut down the enemies in cold blood. Whenever he spends HPs on an attack he screams “Death to the bringers of death!” He rarely dodges, but prefers to Press the Attack instead.

I suggest reading up on the character, supporting cast, the stories and the world at this excellent resource . With over 70 years of history there is lots of information available on the web. 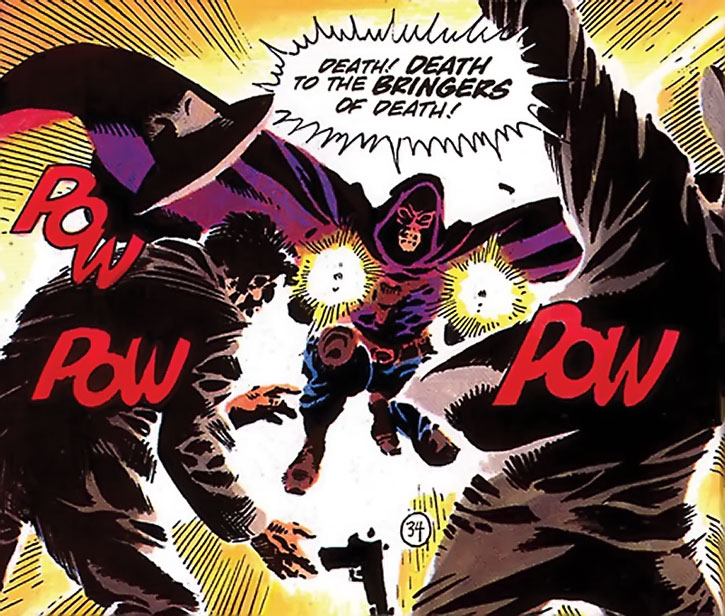 The “crazy killer” the papers call The Spider wears the garb of an assassin with a cape. Originally he wore a broad hat, an eye-piece and a cloak. A later addition is that when in The Spider costume his eyes are glowing, his hair is long and white and his teeth are filed sharp (of course, it’s all a mask, a wig and fake teeth)!

On his left hand he wears a ring with the picture of an arachnid. The Spider has a shadowed demeanor, wolf’s-eyes, is haunted by the night and burns with anger and vengeance.

The Spider is on a relentless crusade against crime. He enters any struggle with nerves of steel and guns blazing. The Spider is cruel and vengeful against evil, and primarily goes after the biggest prey. He feels elated during a mission, runs on adrenaline and crashes afterwards. 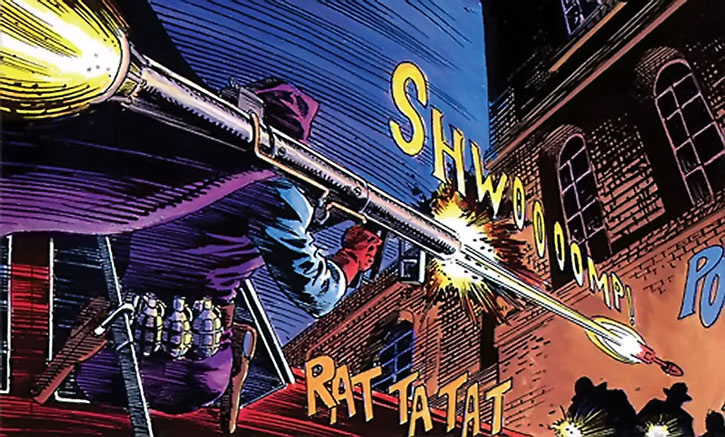 He refers to The Spider identity as if it were another person altogether. This may be to distance himself from the extremeness of what he does. He thinks that The Spider exists both because he is needed and because Richard needs to be The Spider. He is, in fact, very big on vengeance. He feels he is not a murderer because he only kills those that need to meet proper justice.

The Spider sometimes laughs like a madman while gunning down criminals. He has lots of anger inside, takes failure to save innocents very hard. He has problems, in his civilian identity, with not outright attacking uncooperative company underlings. The company that he inherited from his father is kept completely legal, and he does what good he can using its resources.

Being a wealthy socialite, Wentworth enjoys living in a penthouse between vigilante raids, and will participate in high society activities.

Police Commissioner Kirkpatrick suspects him to be The Spider, but cannot prove it. Nevertheless, he is on The Spider’s side, and they have a funny dialogue going around in circles to exchange information. Spider being somewhat distrustful of Kirkpatrick, they are still on better than neutral terms.

The Spider is very concerned with helping all unfortunate, but also cares about society at large. 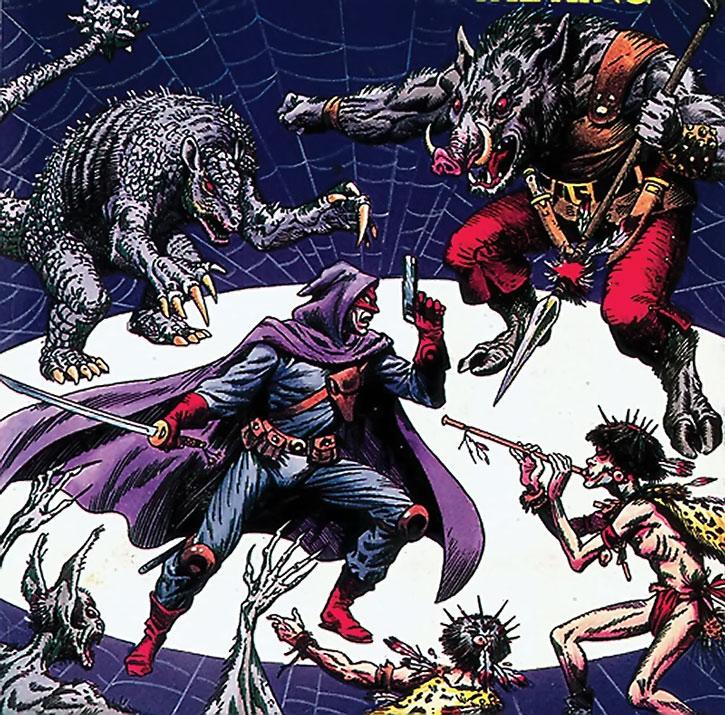 He regrets time lost in the past as en explorer and soldier, as he feels there is a lot wrong with the country. When seeing murder or grave injustice he will explode into action regardless of the danger. If severely injured he will pay for a Desperate Recovery Check and proceed with punishment.

Wentworth tries to avoid the police, and refuses to shoot them even in self defense because they are “on the same side.” When absolutely necessary, he will incapacitate them temporarily by other means to make his escape.

At all times, he will be friendly with Dr. Brownlee and his fiancée Nita van Sloan. His butler Harold Jenkyns is a follower of his crusade and considered a friend.

His closest friends are Ram Singh and Sgt. Ronald Jackson.

[Seeing a monster henchman commit murder] “Killer ! Die !” [strangles monster] “Death ! Death to the dealers of death ! Aarrrrhhhh !” [monster dies and he turns to the master] “And now… for you !”

“Am I likewise correct that pressing the button on this dagger’s haft produces an electrical charge powerful enough to slice through a boy’s ribcage as though it were a pad of butter ? Hmm ? You know what I want you to tell me, foul one.”

“What I thought was an orphan-napping ring turns out to be but a sordid link to a more perplexing plot. There is death in this new mystery, Ram. Great death. I feel it.” 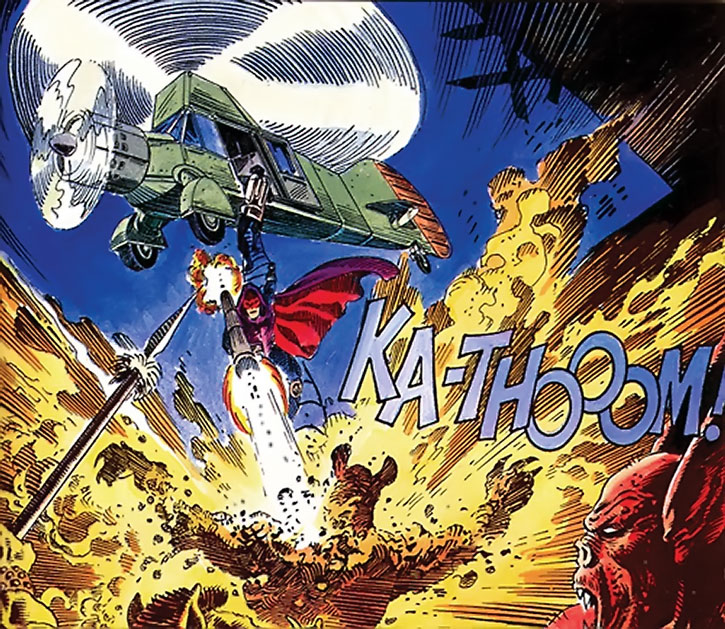 “What on Earth is going on here, you pitiful piece of dung ? What are you doing to these poor people ?”

“I’m not sure those monsters need the repellent, professor. I shot them, cut them, and blew them up. Yet all three managed to walk away.”

“Even before the first bullet hit my chest, I’d felt a low wolf’s-growl start at the back of my throat… an unbidden impulse fanning hot across my brain, urging me to shoot back… to take every one of them I could with hollow-point .45 slugs. But no… I can’t do that. Whether these men know it or not… we work for the same side.”

“The people you killed sent me, murderer — the souls of a thousand men, women, and children, screaming in the night. Their deaths cry out for justice — and deliver criminals to justice.”

“If I thought you deserved to die, you would already be dead. I think you know that, eh ? No, you’re just a high stakes gambler and loan shark with low-life mob connections. If you’ve ever killed anyone, they were within your own sordid social circle. I should thank you. You’ve probably saved me a lot of work. Heh heh heh…”

The world of the Spider is a dark and corrupt; a dystopia like in Blade Runner. Or perhaps Al Capone’s Chicago. Indeed, the Spider would work best in a dark future setting, or in a 1930s metropolis.

Bonuses and Limitations:
All Powers are Skilled Powers, and possibly Mystic Linked.

Ram Singh is probably Spider’s oldest friend. They served together in the Indian Army Special Services, until they had to leave for the States. Singh is a veteran elite combatant and a practitioning Hindu. He is deeply committed to the Spider’s cause of ridding the world of all criminal elements and bound to him through a blood oath.

Singh does not like improvisation, and will turn uncertain when that happens. He is somewhat prone to sabotaging and manipulating the Spider’s love connections in his civilian life, until confronted, so that their work can continue uninterrupted. The stats of a Shock Trooper will serve Ram Singh well. He is also a good chauffeur and an expert knife thrower. 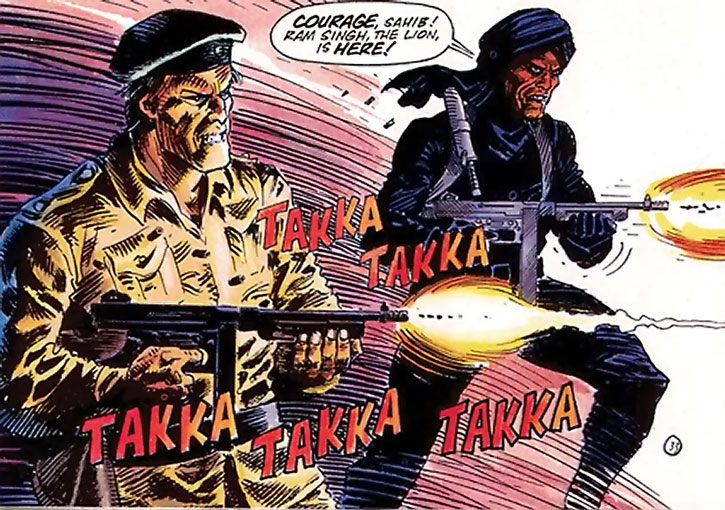 Furthermore, Singh has an amazing knack for showing up exactly when he is needed the most, often gunning down seemingly victorious opponents ! Singh will claim that he followed a blind gamble and the wisdom of Dr. Brownlee to find the Spider. If that is so, then the Hindu Gods really are helping out.

Furthermore, if opposition is too great for the Spider and the confidant to handle, the confidant will bring in even more people to even the odds as if he knew what to expect. Such extras will have the stats of veteran soldiers.

In game terms, this happens when the Spider is hopelessly outmatched and about to die and he chooses to use his Schtick by paying a fee of 5 HPs. Paying the fee guarantees that Singh plus eventual extra help will show up to try to save the day wherever the Spider might be.

The most common extra is Sgt. Ronald Jackson, as a chauffeur, pilot or combatant.

The Schtick-holder has an exceptional Confidant (who has to be created separately), and the Schtick has two separate effects. First off, the Confidant has an amazing knack for showing up exactly when he is needed the most, often gunning down seemingly victorious opponents! He will claim that he followed a blind gamble and the wisdom of another Connection to find the character.

Furthermore, if opposition is too great for the character and the confidant to handle, the confidant will bring in even more people to even the odds, up to a maximum of four fillers, as if he knew what to expect. Such fillers will have the stats of veteran soldiers, and are loyal until death.

The Confidant himself is created either as a separate character or his/her stats are those of a veteran soldier. In game terms, this happens exactly in the moment, in the same Phase, that the character is hopelessly outmatched and about to die and he chooses to use his Schtick by paying a fee of 10 HPs, and only then.

If the Confident has been stated as really being supposed to be somewhere else, the fee goes up to 20 HPs.

Paying the fee guarantees that the Confidant plus eventual extra help will show up to try to save the day. For a small fee of 5 HPs, the Confidant or another Connection will instead immediately show up with a vehicle, such as a car or a helicopter to pick up the character. In that case, if in combat, the character better set up an explosive or other offensive device to cover his escape.

The second effect is that through an uncanny bond the character can borrow HPs from his Confidant while in the field. The bond can be through prayer, telepathy, radio or anything else appropriate allowing some form of communication. It is enough if the Confidant knows that the character is in the field and prays for his success.

Borrowing allows the character some extra degree of luck, and to save his own hide instead of calling in expensive help. It is never possible to borrow up to more than one fourth of the characters own usual HP amount, or one fourth of that adventure’s expected Standard Award. All such borrowed HPs are repaid immediately from that adventure’s Standard Award upon completion. 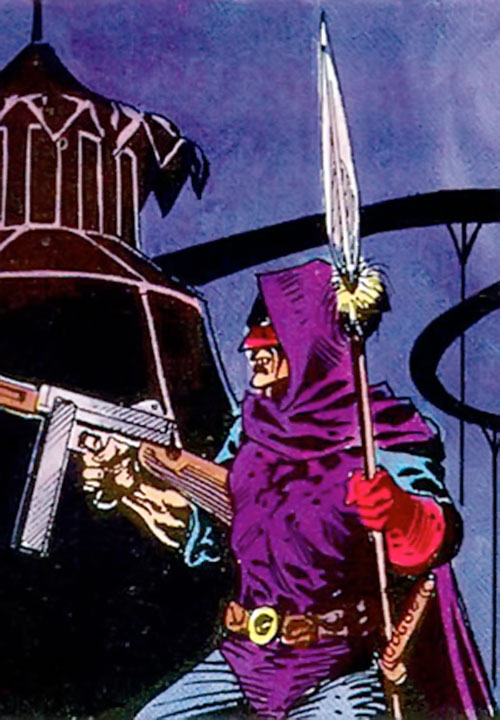 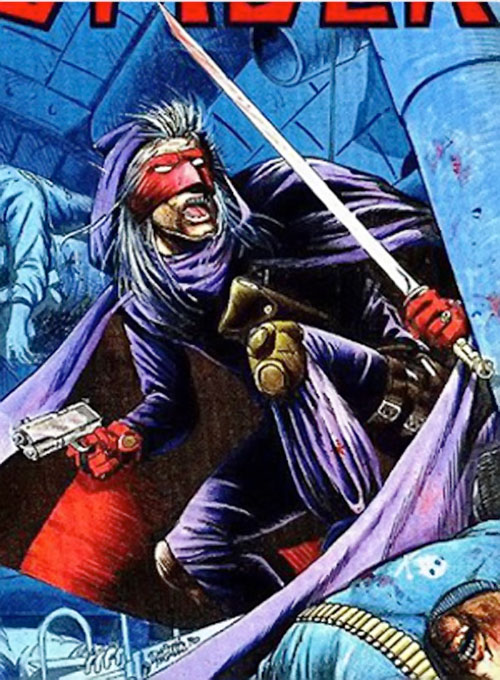 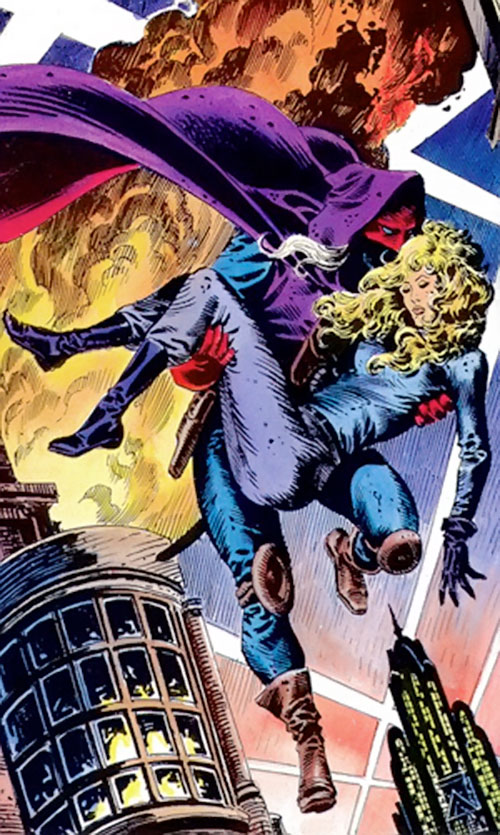 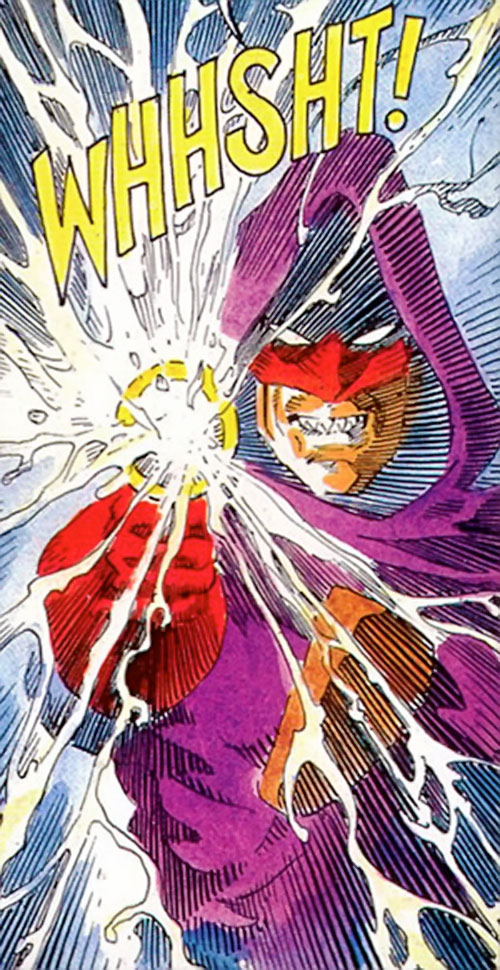 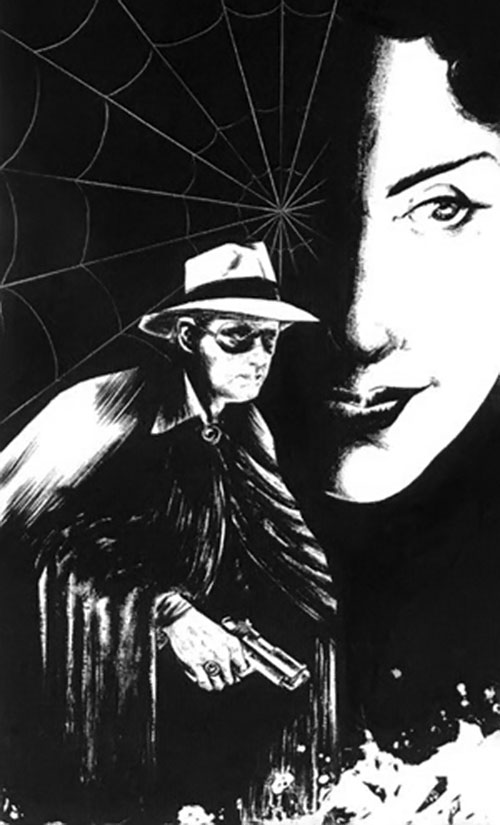 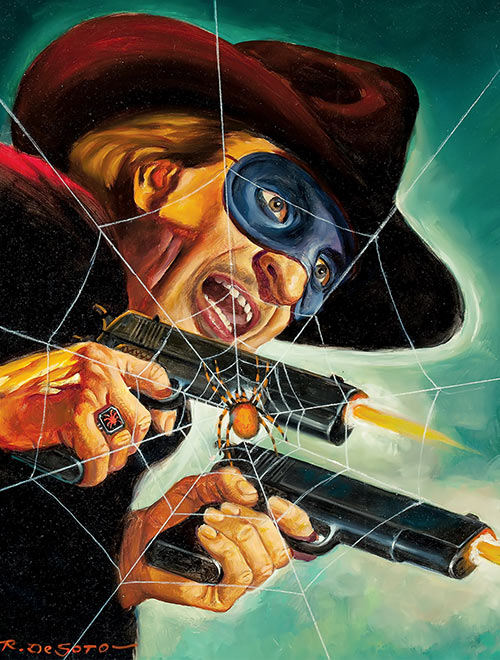 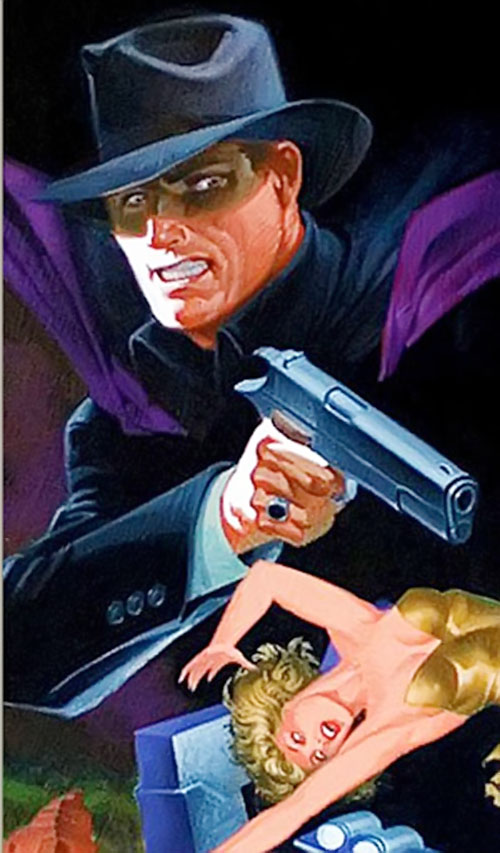 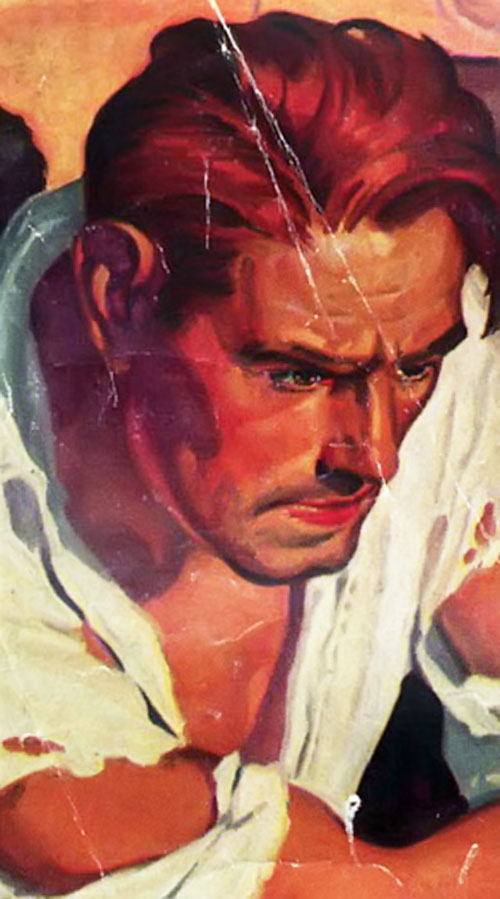