The unconventionally-shaped robot is actually humanoid. Multiple tentacles can be extruded from the flank’s upper halves, and the short, bowed legs can be extended into normal-length (or far greater), very flexible legs.

The “feet” have some kind of wheels, and it seemed to be propelled by twin turbines in the back whilst being driven around. The Spider-Slayer is very agile on these wheels, and can lock them at any point to walk or run.

The entire robot is coated with a non-stick layer. The early Spider-Man’s webbing just slid like water off a duck.

The main offensive system are the tendrils extending from the “shoulders” of the robot. Those have steel-like tensile strength and could efficiently trap a young Spider-Man in their coils. They are very fast and coordinated (the robot runs them – apparently the operator just presses a button), and even Spider-Man could not escape them for long.

They were so fast they could bat away projectiles hurled at the Spider-Slayer, including webbing sheets (which was facilitated by the non-stick coating). The main ’arms’ and ’legs’ are also programmed to be able to climb building with great reliability and alacrity, and the ’legs’ can stretch far enough to cross most streets in one stride. 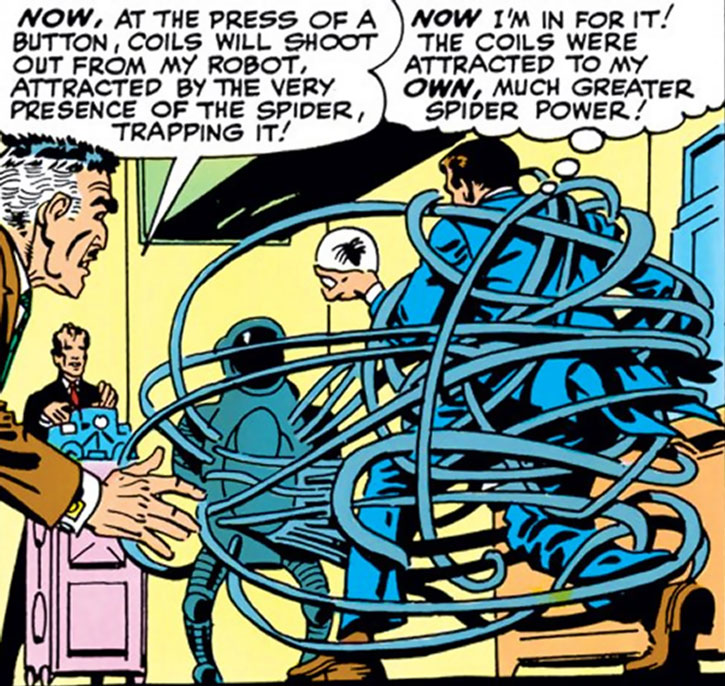 The Spider-Slayer has specialised sensors that lock on spiders – which actually works to track Spider-Man down. Presumably there are filters to ignore ordinary spiders in its environment (Spider-Man’s signature is much stronger than that of any ordinary spider), but if necessary it can track those too. How it all works is quite a mystery.

The Mk1 Spider-Slayer is operated by a simple telepresence interface – most people can learn to use it proficiently within minutes.

The data link may not be very hard to jam, however, especially using more modern means. The screen in the head shows the face of the operator in real time, and transmits their voice live.

This is the first model of Spider-Slayer that was documented – the beginning of a long series from inventor Spencer Smythe. Smythe obtained an appointment at the Daily Bugle, wanting to convince publisher J. Jonah Jameson to use the robot to track down his enemy, the Amazing Spider-Man.

Jameson, having already had bad experiences with inventors of Smythe’s ilk, summarily dismissed the scientist and refused to see the ridiculous-looking robot in action.

Peter Parker, secretly Spider-Man, was present at the scene. Unimpressed by the ludicrous-looking machine, the young and reckless Parker saw an opportunity. He could take great photos of Spider-Man if the Spider-Slayer was sent after him. Parker assumed that the invention couldn’t possibly pose a serious threat.

Pushing every button of Jameson’s legendary temper, he convinced the moody and maudlin mustachioed editor to agree to a demonstration and a test run.

As it turned out, Parker’s youthful overconfidence soon came to bite him in the posterior. The Spider-Slayer, piloted by an ecstatic Jameson, could track him down everywhere, counter his every trick, and threaten him much more severely than he had imagined. Inevitably, the steel-like tendrils of the Spider-Slayer wrestled Spider-Man down. 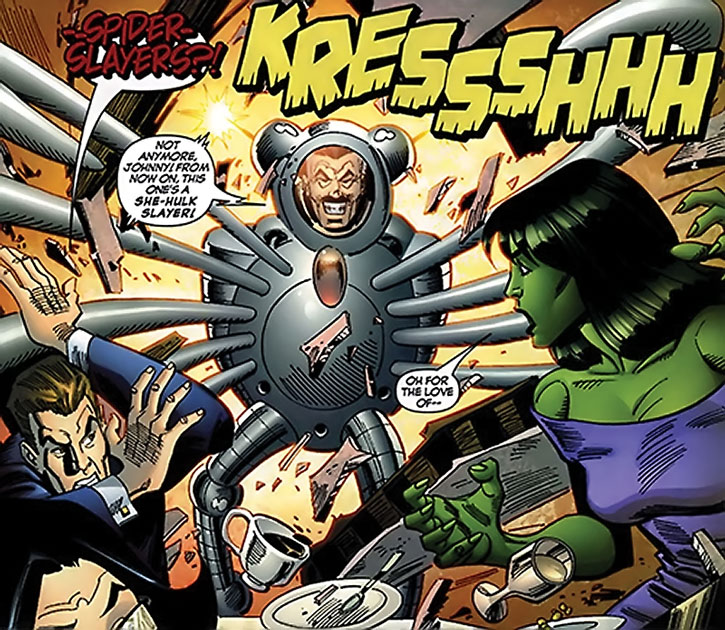 Despite the non-stick coating, Parker managed to use his wall-crawling power to yank open one panel on the robot’s chest. His technical skills allowed him to shut down the machine. He mischievously left behind a spare Spider-Man costume filled with webbing to trick Jameson and Smythe into briefly thinking that they had been successful.

Smythe kept the Mk1 in his lab, not making improvements in a while as he was busy on other projects. But it had been repaired and was fully functional. Eventually, Smythe would work on the Mk2, a vaguely similar but improved version.

Parker’s daughter May, from the possible MC2 future, once went back in time to the point where her father was dealing with the Spider-Slayer. She was briefly chased by the robot, confusing Jameson and Smythe when they finally noticed that “Spider-Man” was a girl.

It is unknown whether the past May travelled into was Earth-616  or another, similar reality.

The Mk1, or more likely a poor quality replica of it, was part of the Reanimator’s army of vintage robots. It was fairly successful against Wolverine, grappling the hairy Canadian mutant. This forced Wolverine to produce his claws (back then a very painful action) and slash the Mk1’s tendrils and “head” into bits.

Many years later, in 2009, it became apparent that the Mk1 Spider-Slayer had been kept in Jameson’s basement. This accredits the theory that the Reanimator’s was a replica. The robot in Jameson’s property was fully functional, though it seemed to have been mothballed for years and was now obsolete.

When Jameson learned of the unexpected decision of his son John and the superhuman adventurer Jennifer Walters (aka the She-Hulk) to marry, he went ballistic. He was so irrational that he actually reactivated the Mk1 Spider-Slayer and its control unit. He then had it attack his son and Walters, calling his weapon a She-Hulk Slayer.

The robot was wrecked in short order by the glamorous gamma giantess, and hasn’t been seen since.

The Spider-Slayer does not speak and is fully under the control of its operator. However, it does have sophisticated expert systems. For instance when aimed in a general direction, the robot will correctly decide and execute the running, climbing, attacking, etc. movements that suit the terrain and situation.

Spider-Slayers look very much like something the Blue Beetle (Ted Kord) would have encountered during his early career.

Advantages:
Misc.: Non-stick coating increases the OV against ’sticky‘ attacks by 3 CSes. Depending on descriptors that can include many Snare, Glue, etc. attacks. GMs can lower the CS increased base on the attack (a lariat or Grappling attack, for instance, might only suffer from a 1CS penalty). 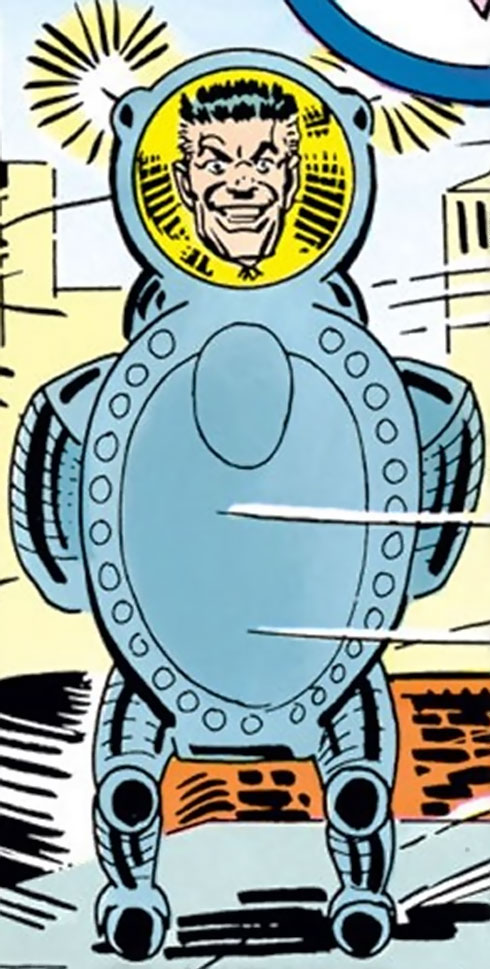 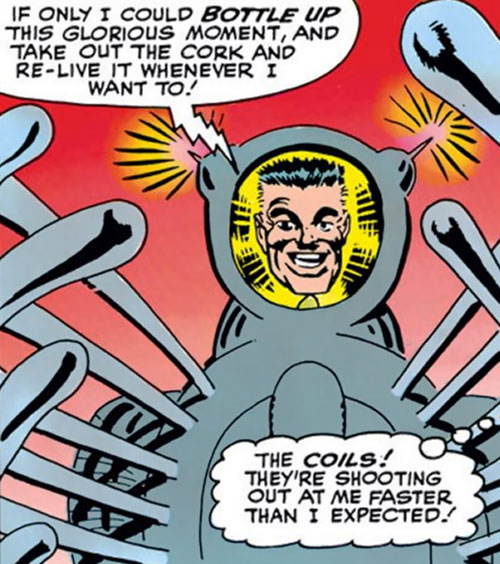 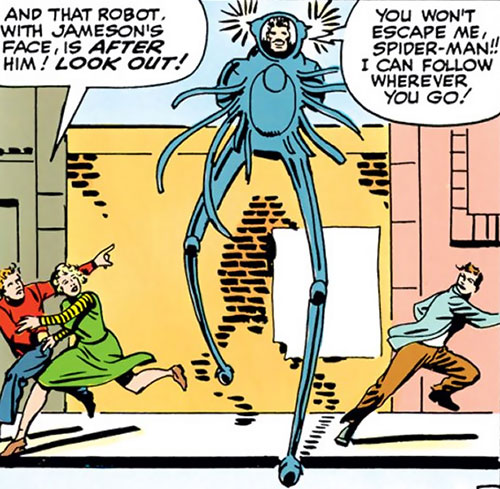 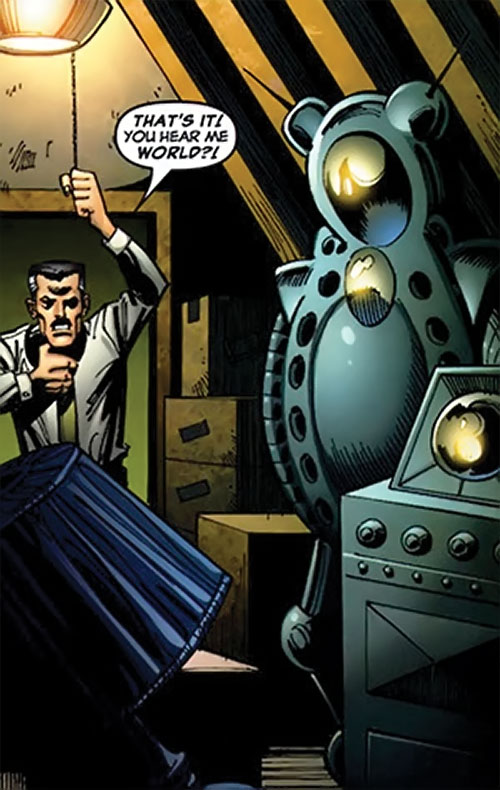