The Spider Widow is a fairly obscure Quality Comics heroine, who debuted in 1942.

I couldn’t read *every* Spider Widow appearance for this profile. Just the vast majority.

The Spider Widow is athletic and has excellent reflexes. In particular, she’s a excellent equestrienne and a good fencer.

She is good at improvising under pressure and finding unorthodox solutions that somehow work. In DC Heroes RPG terms, she has decent Hero Points  for a minor, low-powered character.

She also has a certain presence. However, she cannot used that asset in ordinary circumstances, being a woman in the 1940s.

The Spider Widow can direct the actions of a number of spiders. She seems to do that psychically, since she doesn’t even have to talk or gesture to send them crawl over somebody. There never was any hint or explication about that ability. All we know is that her gardener showed her the black widows.

Perhaps the gardener taught her Strange and Mysterious Secrets from the Orient™, as was the style of the day. Or perhaps she was just born with it. In DC Heroes RPG terms, the Pet approach was chosen since it is thematically neutral. 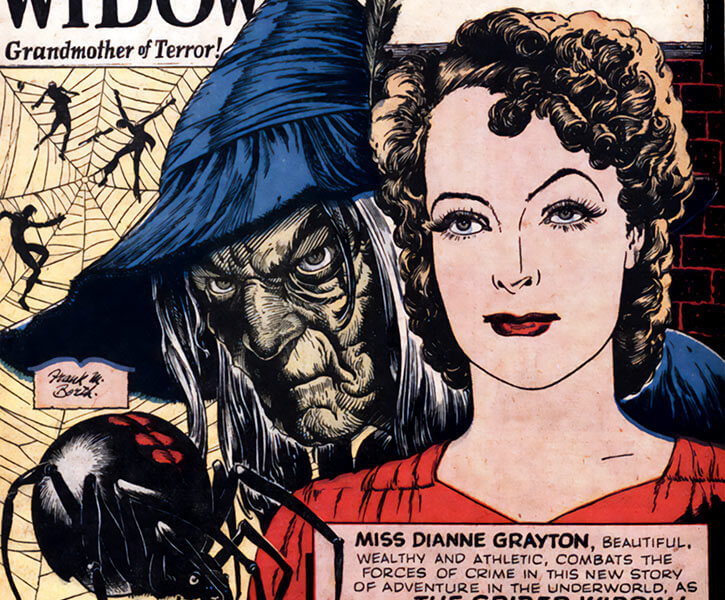 It is possible that she can influence other animals. For instance, she once stared down a lion and is a horse-riding enthusiast. Pheromone-like powers like those of the first Spider-Woman are also a possibility. These would further explain her absurd feud with Phantom Lady.

Grayton always carries her costume with her. In later stories she stops carrying the full costume, or using the spiders. All she’s got are the mask and wig of the Spider Widow in her purse.

Miss Grayton was a rich, independent and athletic young woman. In 1942, with the war raging on and the very active threat posed by criminals and saboteurs on the US home front (at least on DC Earth), she decided that enough was enough and that she had to fight crime and injustice.

Right at that point, two trigger men from crime boss Jake Lardo ended up on Grayton Estate. Though they had successfully sabotaged a bridge to send a train crashing down a ravine, they had then run out of gas. Forcing the Graytons’s chauffeur to fill their tank up at gunpoint, they did not notice that Dianne grabbed a few things and sneaked into the trunk of their car.

A spider is born

After they drove back to their base, Grayton got out of the trunk and burst in with… a hag mask and wig and some pet spiders. When she left, there was nothing but corpses and a note for the police, reading “Compliments of the Spider Widow !”.

The Spider Widow continued to strike and have adventures. She weaved a web of justice to trap the insects of corruption, or so we’re told. She tangled with criminals (including crooked circus performers, of course, since this is the 1940s) and a host of spies and agents from various Axis countries.

Her successes against Axis spies were such that she was targeted for elimination and drawn into a trap. However another masked crimefighter, the Raven, intervened. Together they busted up the spies ring and their U-Boat contact. Thanks to the Raven, the Widow was not sent to Europe to be handed over to the Abwehr .

In the heat of the moment they shared a romantic interlude. Yet the darkness prevented them from seeing each other’s unmasked face.

The Spider Widow and the Raven soon teamed up again. A freak coincidence resulted in both of them being on a train full of US military officers that was stopped by fifth columnists . Both heroes escaped and helped the Army in locating the kidnappers’ hideout.

Later on, another improbable coincidence (no, really) resulted in the two costumed heroes busting a Japanese spies installation.

Abundant coincidences continued. The pair repeatedly teamed up to foil spies, saboteurs and traitors. Eventually they became lovers and put in place procedures to contact each other. 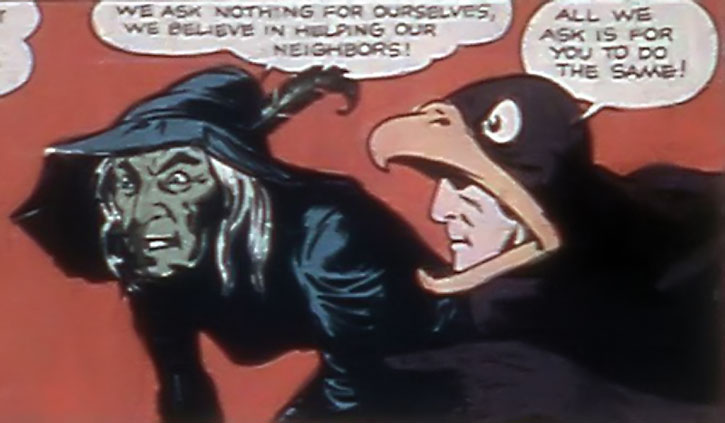 It is mentioned in one story that Grayton was or became an actress during that general era. She also busied herself by raising money for orphanages, presumably among other charitable actions.

During an… unusual case to settle an inheritance, the Widow finally learned the Raven’s name – Tony Grey. He learned her actual identity in the same general time frame. Grayton also discovered that Grey occasionally associated with Ms. Sandra Knight, secretly the Phantom Lady.

Initially there was obvious tension. Grayton thought Knight was romantically interested in the Raven, and the two heroines did not get along at all. Their mutual cattiness and hostility even resulted in the escape of a criminal they and the Raven were trying to arrest. That occurred as they were foiling a conspiracy against Ms. Knight’s father, a senator.

A case where the Raven arranged for the Spider-Widow to rescue the Phantom Lady led to a smoother working relationship for a time. But a level of cattiness and feuding soon resumed.

Some local criminals figured that this might be an angle to take out the crime fighters. Thus, they used forged documents to escalate the feud and drive the two into a fencing duel. The criminals also ensured that the Raven would be present to judge the duel.

They laid an ambush, starting by shooting the Raven as they assumed that he was the most dangerous crime-fighter on the scene. Despite their tactical advantage, the Raven’s wounds and the low-key feud between the two women, the gangsters were defeated. The Raven was hospitalised, but he made a quick recovery.

There were not further appearances of the Spider Widow.

Grayton is a steel-tempered, no-nonsense, patriotic, take-charge woman. She has little time for corruption, superstition, the Axis and whatever threatens her version of the American Way of Life. Like many 1940s heroes, her adventures tend to either be reacting to stuff she reads in the paper, or coincidentally stumbling upon the plot.

She particularly likes the outdoors and horse-riding. Dianne is irrationally jealous of other women spending time with the Raven.

“These men must be responsible for that train wreck ! This is my chance to do something ! All I need is this rubber mask and those pets the gardener showed me !”

“A secret opening ! Maybe I can get out of here yet !”

“Don’t reach for that heater – because I’m cooling you off !”

As a Quality Comics character, the Widow became a DCU character. For instance she associated with the Phantom Lady, who has a well-known presence and legacy in the DCU. At the very least, she existed in the pre-Crisis DCU, and there’s no reason to suppose that she wasn’t a minor post-Crisis character. 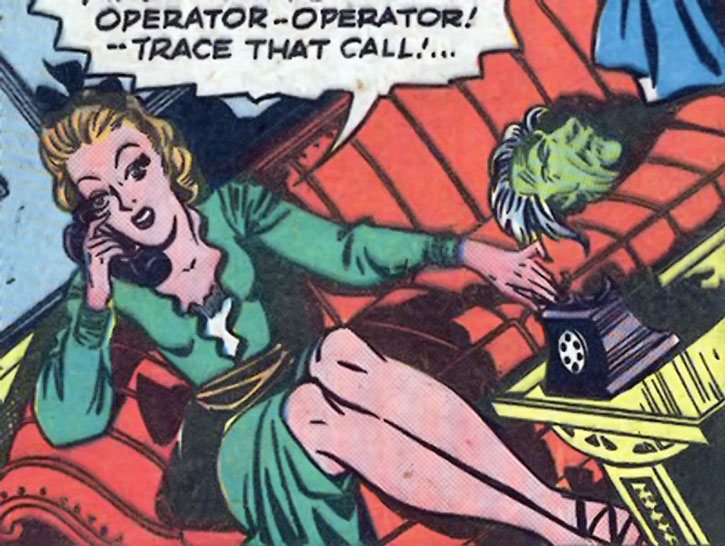 Like in this profile, a post-Crisis version of the character would likely have stayed much closer to its roots as a crime-fighter with gimmicks.

It is possible that obscure modern-day villain the Prairie Witch was inspired by the Spider-Widow.

Another possible tie, meant to explain her powers, would be that the Widow was trained by Dr. Roy Tam, one of the allies of the Shadow. This hypothesis explains where she gained her abilities. Perhaps the spiders are purely an illusion, and the Widow sort of cloud men’s mind. And it would give her ties with another famous pulp crimefighter.

Maybe Grayton was an agent of the Shadow all along ! That would be cool.

The Spider Widow, Grandmother of Terror !

The Spider Widow’s Pets are unusual. She has a swarm of widders… hidden in her witch costume. She has an exceptional rapport with those. Frex she can fling them over several meters and they will land and bite. And if somebody tries to Grapple the Widow all spiders still in her costume will surge out and attack.

In practice, the spiders don’t quite need stats. What they actually do is the equivalent of Broadcast Empath: 04, limited to inducing panic. Most people will react hysterically when venomous, large spiders emerge from the Spider Widow’s clothing.

Reactions have included people jumping into water (even if they didn’t know how to swim !) or knocking themselves unconscious by running away in a panic. People who are actually arachnophobic will receive large penalties to their OV/RV. And it is worthwhile to note that this is the most common phobia around.

The potency of the venomous bite varies according to the number of spiders biting. A single one would be Poison touch: 04, a full swarm could reach 08. Of course, targets with one or more AP of applicable Skin Armor, a RV above 07, in sealed clothing, etc. will not be affected by the bites in the first place.

The toxin acts very quickly, potentially resulting in paralysis and eventual death. In game terms, the paralysis is caused by the person’s BODY being brought to zero by the Poison touch’s first attack roll.

The spiders do not get used past the first few stories. Yet the schtick is memorable enough to have the Spider Widow use them aplenty in your games, even if that doesn’t quite match the later material.

Source of Character: Quality comics in the early 1940s (mostly in Feature Comics) by Frank Borth. 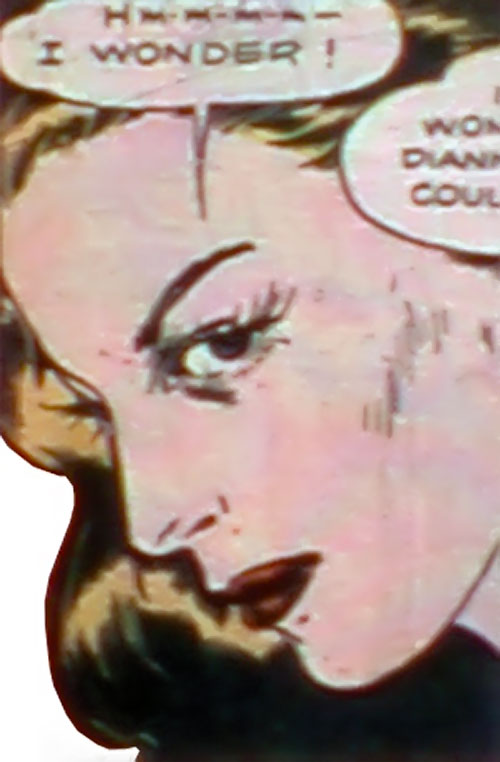 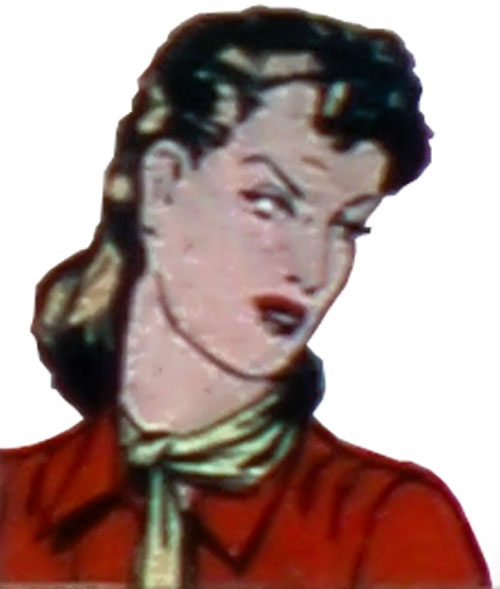 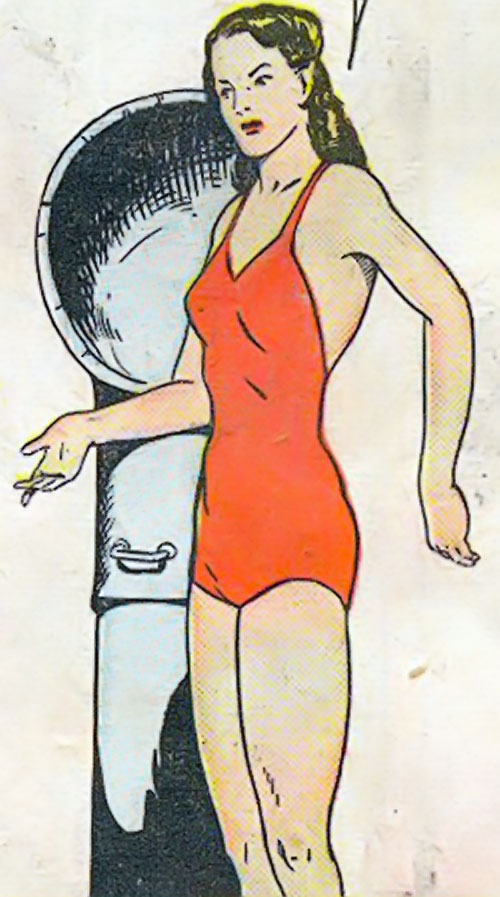 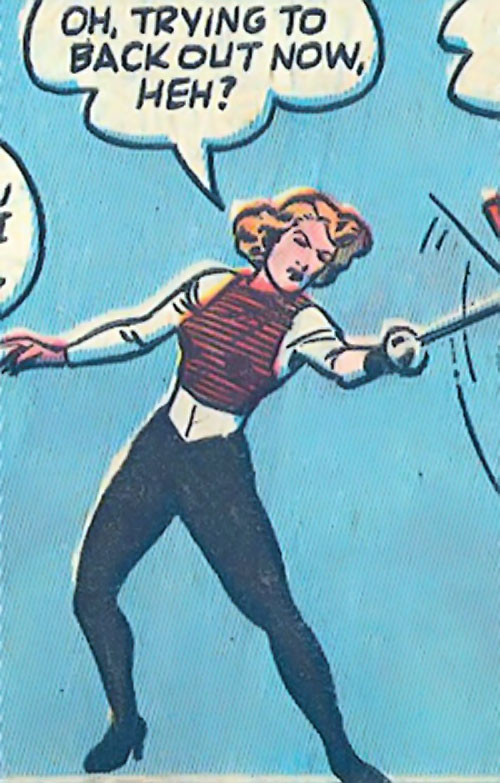 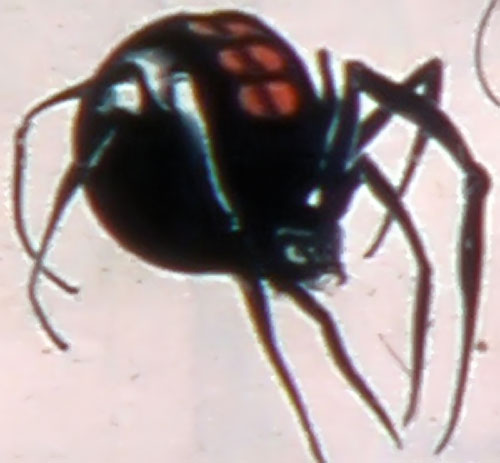 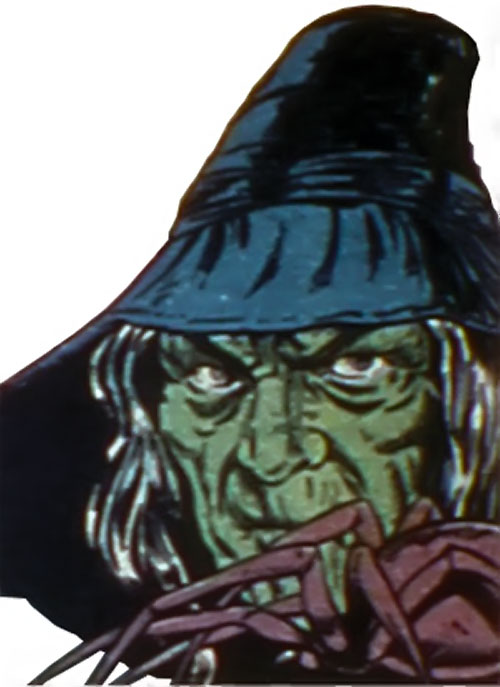 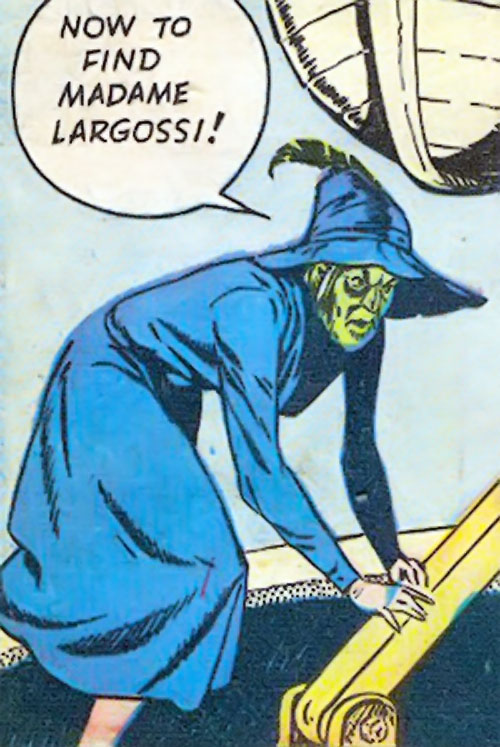 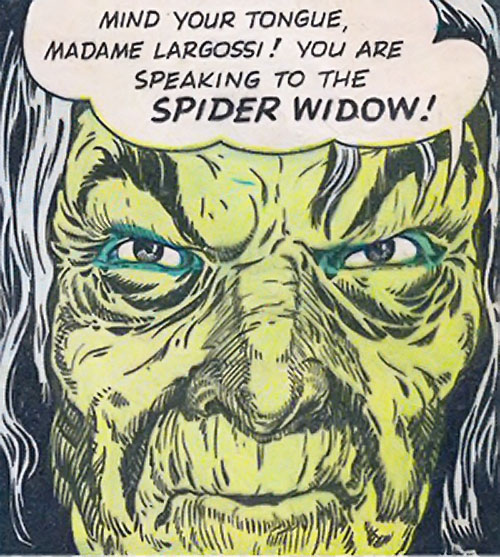 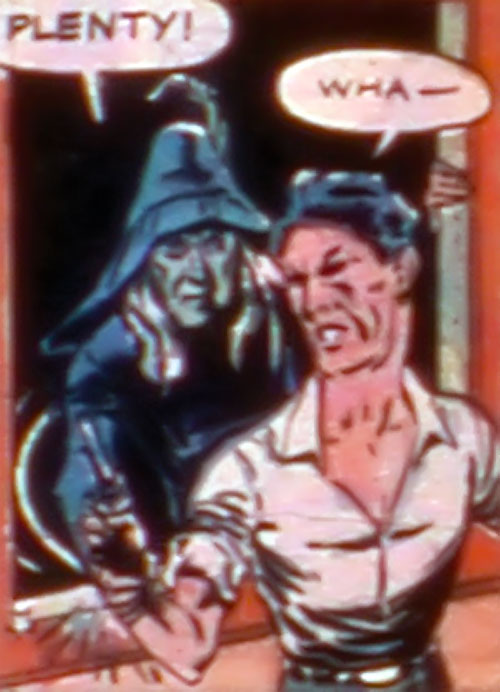 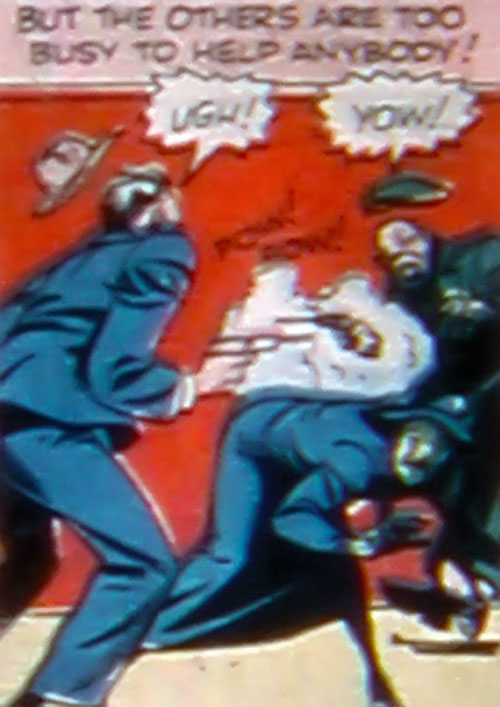