Spider-Woman has superhuman strength and endurance, and is able to crawl on vertical an inverted surfaces by emitting an unknown adhesive from her palms and soles. She is a professional detective and has excellent training as a spy, as well as excellent hand-to-hand combat training from HYDRA.

After losing both those powers she started packing and concentrated on her detective career ; she didn’t use guns as Spider-Woman I. It was revealed at one point that Drew could exude a high concentration of pheromones that would cause fear in women and pleasure in men.

Very briefly, she’s the daughter of a close colleague of the High Evolutionary, and was irradiated on mount Wundagore. Her father tried something very experimental involving irradiated spider blood and a genetic accelerator to save her. Thus, while she was born in the 20’s, she spent decades in suspended animation.

She was released when she was healed, and lived a very simple life in Central Europe for a few years before an accident drove her away from home.

At one point, it was revealed that the Viper II was actually Jessica’s mother (and that the Viper’s real name was Merriem Drew), but this story was later retconned away.

Jessica was then seduced by an HYDRA officer and became a top-flight assassin for that terrorist organization. Among her first missions was the murder of Colonel Fury, but she flinched and fled. She became a San Francisco-based super-heroine some time later, dealing with the odd, quirky, strange and downright paranormal (and, to be frank, somewhat camp).

For a few years, she became a PI as Jessica Drew, conducting her missions under the guise of masked super-heroine Spider-Woman. Her grace and the lives she saved led to many people on the West Coast nicknaming her the Angel of the Night. 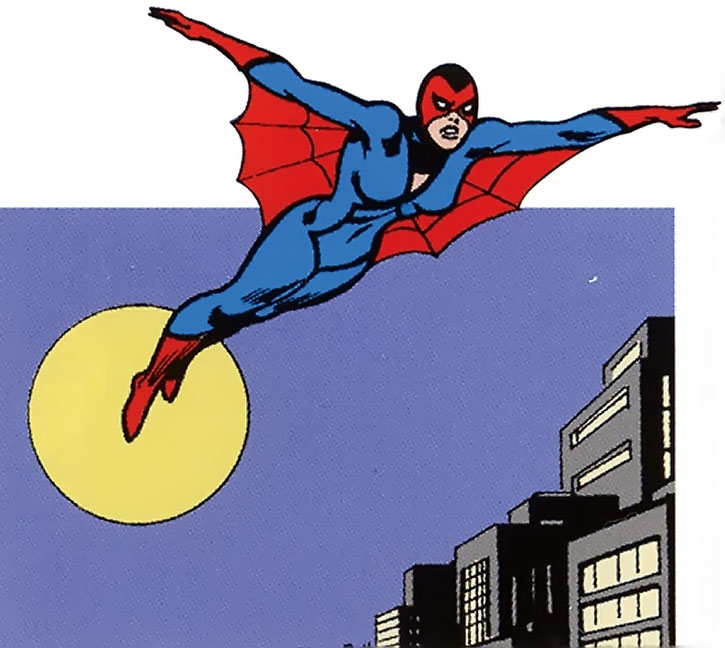 Spider-Woman lost her Lightning when Doctor Strange freed her astral body (which had been trapped by Morgan Le Fey), and sacrificed her Energy Absorption and Systemic Antidote in order to save the second Giant-Man. Left with few paranormal abilities, she concentrated on her PI career, retiring her Spider-Woman ID. For years, she worked as a troubleshooter in Madripoor.

Then, the original Spider-Woman was rescued from a magic dimension by her best friend Lindsay McCabe and the second Spider-Woman, Julia Carpenter. How Jessica got there from her last appearance was something of her mystery, but at that point she had seemingly regenerated most of her powers.

She started working again as a superhuman P.I., getting tangled in the genesis of other Spider-Women – and at one point fighting alongside with fellow P.I. Jessica Jones.

Her next career move was to become a special S.H.I.E.L.D. agent (it’s a living), a job which led her into becoming a part of the New Avengers.

Jessica is an attractive woman in her late 20’s (probably early 30s by now) with jet black, short hair and something vaguely elfin in her eyes. She is rather tall and athletic. In her Spider-Woman identity, she wore a full red-and-yellow costume leaving only her lower face bare, and a knee-length black wig.

Due to the pheromones, Spider-Woman is considered to be incredibly hot ; she has grown used to it.

Jessy would be the daughter of some obscure villain (professor Ivo, or doctor Milo for instance, or a WWII villain), and became his secret weapon during her late teens. She then fled to Frisco, and her career went on like it did in the Marvel Universe.

However, she would have had a number of adventures with Jason Blood and the Demon (those who wish to fully develop Spider-Woman and know about her full history might wish to replace either Mordred or Magnus with the Demon for a DCU campaign).

“Shew ! Escaping from death traps takes it out of a girl !”

When exposed to a noxious substance (non-corrosive poison, alcohol, drugs, radiations above UV frequencies, etc.) Spider-Woman quickly starts to build up an immunity. While she is normally affected at first, she quickly becomes immune.

Any damage suffered is regenerated at an accelerated rate (Regeneration) ; thus poison/radiation/whatever damage should be tracked separately from normal damage.

Note that, while a standard Poison Touch toxin will, according to the rules, attack every Phase, most toxic attacks have a Limitation that their frequency of attack is much slower.

Spider-Woman’s physiology builds up enormous charges of bioelectricity, that can be shot as bioelectric bursts she calls “venom blasts”. Each blast takes one AP away from the Power Reserve ; at the end of a scene the bioelectricity charge can build up again.

The recovery time is (4 APs + APs to be recovered) APs of time, so recovering all 6 APs takes 30 minutes. If she has to use her bioelectricity again 10 minutes after the end of the scene, she would only have recovered 2 APs in her Power Reserve.

Spiderwoman can release peculiar pheromones in the air that will have a noticeable effect on the mood of most people close to her. Previously this effect was Always On, but it would appear she can now trigger or stop it more or less at will. The Bonuses and Limitations are : 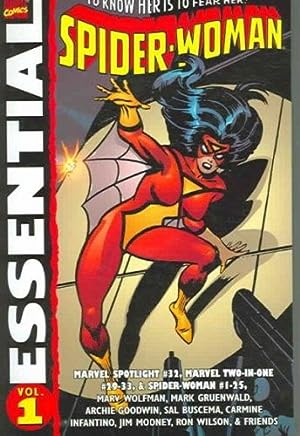 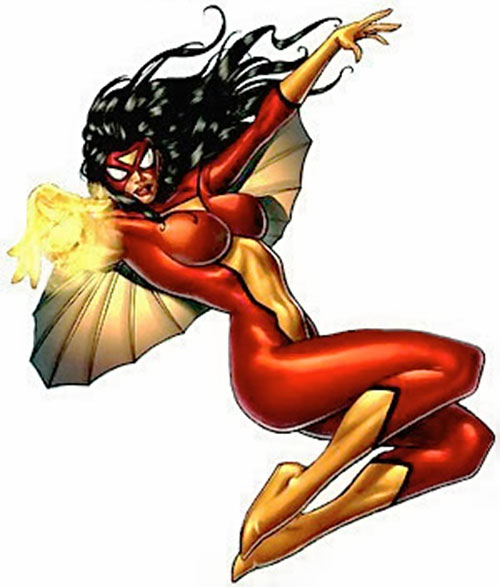 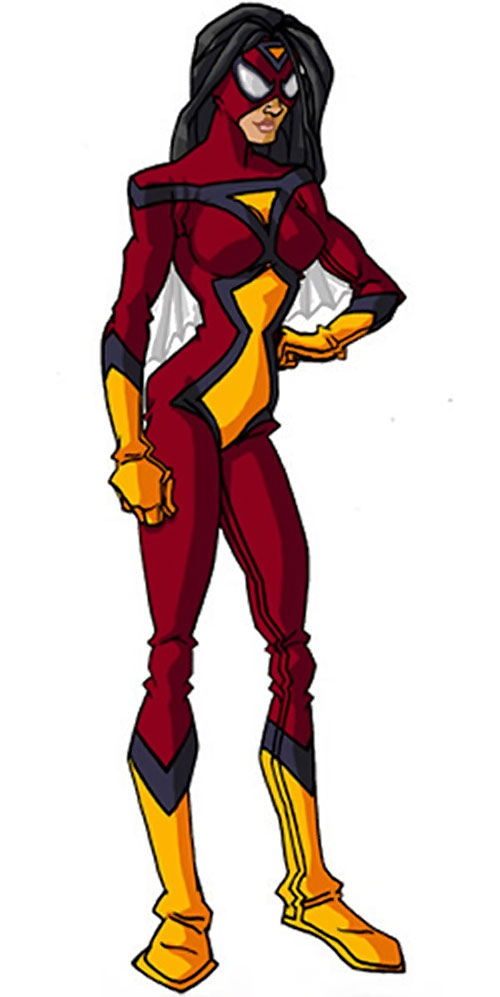 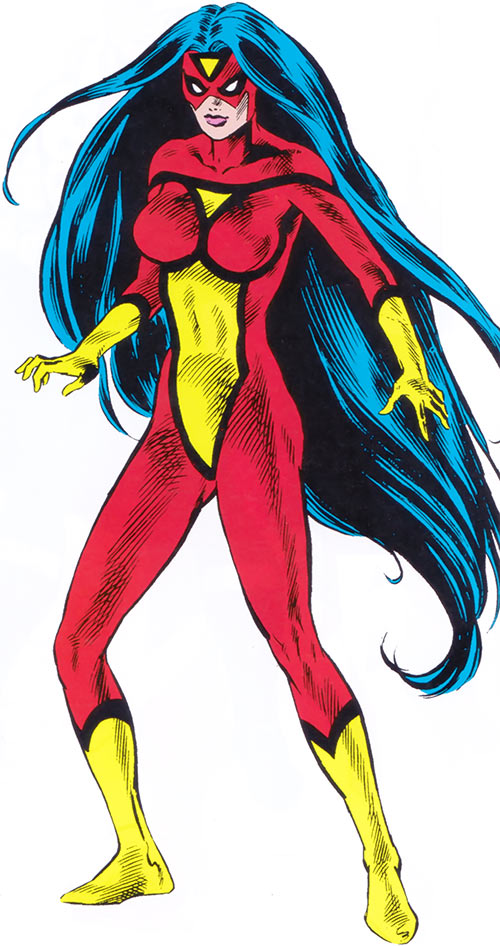 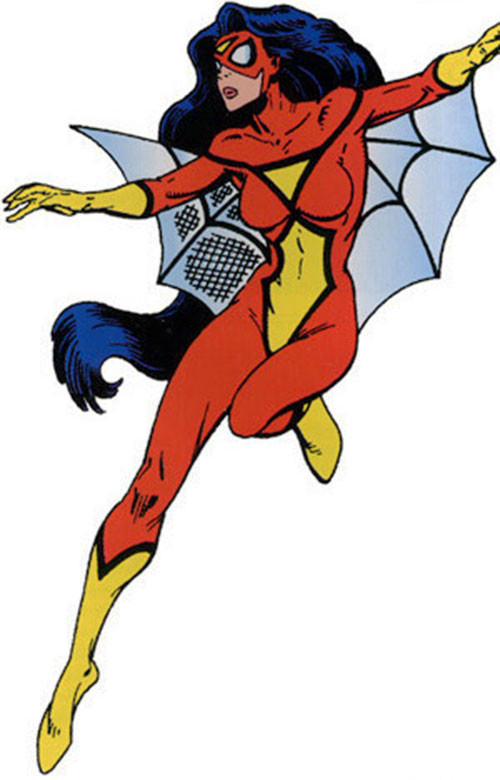