Spider-Woman was an off-the-cuff 1977 creation. The goal was to stake a claim to the name before another firm could use it.

As it happens, this issue of Marvel Spotlight sold well (the costume designed by mighty Marie Severin  certainly helped). So Marvel decided to do more with the character.

Spider-Woman’s career has been unusually chaotic. So we’ll go with step-by-step emergent history profiles to keep it simple.

This profile is thus the very first version of the character, as written by Archie Goodwin.

By her second appearance, the retconsMaking changes to a character or story after the fact have begun. As we’ll explain in the Spider-Woman (Jessica Drew) (Profile #2 – Wolfman version) profile.

Spider-Woman has a collection of powers that evoke arachnids : 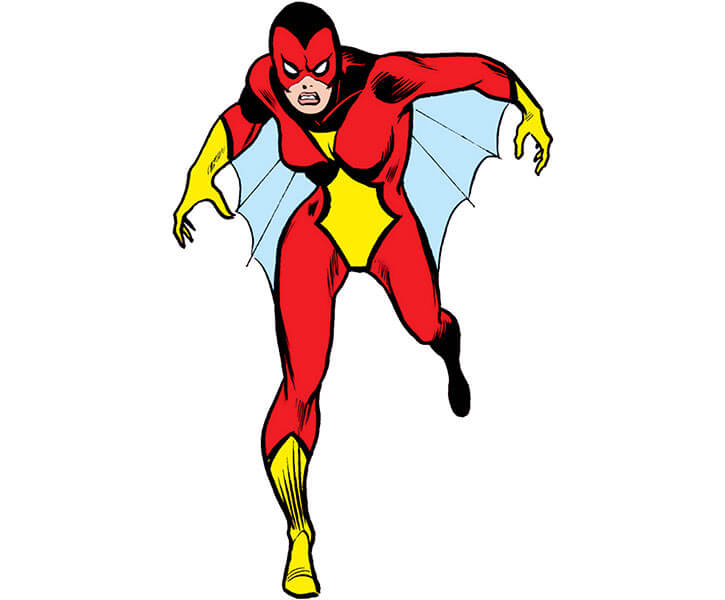 Spider-Woman can also project bolts from her hands. These look like standard, yellow energy blasts that go “zdat !”, which evokes bio-electric bolts.

However, the captions always refer to them as “venom blasts”. This seems to be meant literally, as high-pressure jets of liquid poison. Rather than as a fancy name for energy rays.

Furthermore she can glide in the air, though that ability seems enhanced by her costume. It might in fact be completely artificial, much like with the S.H.I.E.L.D. “flying squirrel suits”.

The costume’s gloves also contain involuntary venom discharges. And may help with other aspects of her powers such as adhesion.

Arachne is a highly-trained Hydra field agent and assassin.

In particular she excels at breaking and entering. She combines her powers with excellent training in stealth, security systems neutralisation, ambushes, etc..

She is also trained in vehicles operation and the martial arts. And likely has espionage skills. 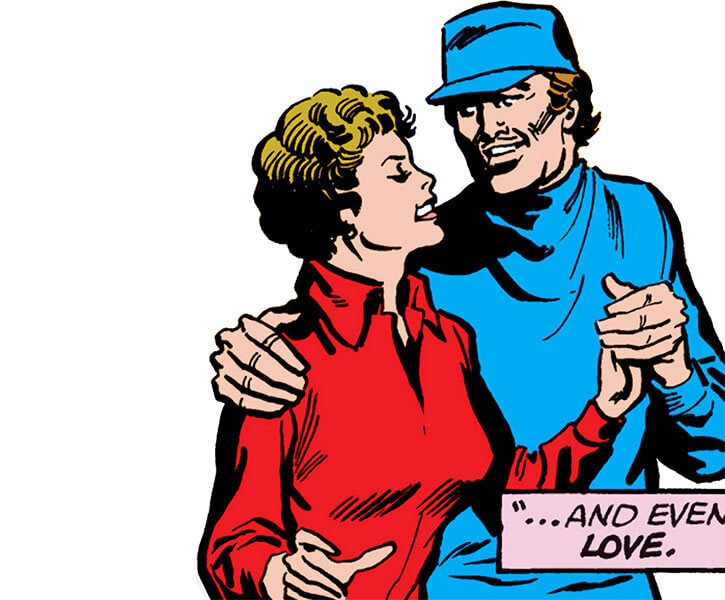 If some of youse want fitting, 1977 music for that chronologically correct atmosphere, lessee… Yeah, Linda Ronstadt.

As often with WORG soundtracks, that’s a live version so you can see aesthetics for that era.

https://www.youtube.com/watch?v=__627t2bzJM
Available for download on Amazon (there’s even a 2015 remaster).

(Again, this doesn’t take any later facts into account unless noted.)

Arachne is one of the New Men created by the High Evolutionary in his science citadel on Mount Wundagore.

The New Men are animals who underwent a four-colourSomething goofy from over-the-top early comic books. process of super-evolution. That turned them into fully sapientCapable of intelligent reasoning upliftsTurning an animal into a sapient, more human-like life form. New Men are usually humanoids, but with an animalistic head and body.

The process was run on an unspecified spider. When it was complete the subject was indistinguishable (barring advanced medical examination) from a young human woman.

She also had super-powers, which isn’t the norm for New Men.

However, the New Men felt an instinctive, irrepressible aversion toward the lass.

Do you see what happens when you find a stranger in the Alps ?

Lonely and rejected, the young woman left the science citadel and joined a human village.

One assumes that it was in Transia. Perhaps not too far from the area where the Scarlet Witch and Quicksilver lived as youths.

What she did for a living is unrevealed. However, a nearby Hydra cell heard about her. So it is probable that she used her abilities (some enhanced strength and endurance for farmwork ?) in public.

In time, she even found a lover. However, while the couple was making out, pranksters gave them a scare. Startled, Arachne involuntarily released a poison bolt. That killed her lover.

The scared locals followed an important Transian cultural tradition. They chased her away with torches and pitchforks. In shock, the young lady developed instant amnesia.

The fleeing Arachne ran into a limousine. Hydra commander Count Otto Vermis had come to observe the village and its rumoured superhuman.

Arachne was easily recruited into Hydra, especially when Vermis saw that the lass was amnesiac and utterly confused. 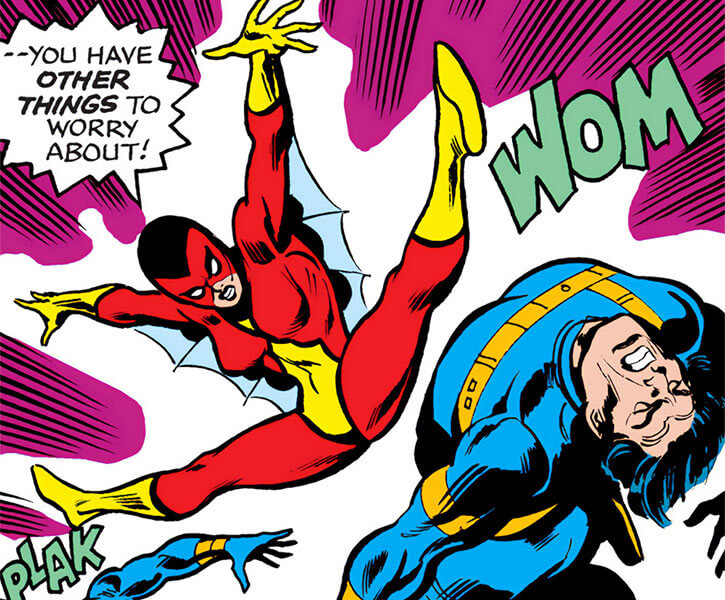 Hydra scientists soon discovered the nature of their new operative. Vermis didn’t tell her anything, but invested heavily to make her into a super-assassin and superhuman fighter.

She was code-named Spider-Woman and given a distinctive costume.

The lass was abundantly lied to. She was convinced that Hydra were good guys, unjustly persecuted by a world that feared and hated them.

An handsome senior agent named Jared was also ordered to seduce her and become her lover. He did, though he was secretly disgusted as he knew that she was really a spider.

The next step of the plan was for Jared to be captured by S.H.I.E.L.D. and taken to Nick Fury. Spider-Woman was then sent after him. Her powers would allow her to reach Fury, and she would kill to defend Jared. She had been told that Fury was a fanatic who tortured captured Hydra agents.

The powerful, stealthy and well-trained Spider-Woman bypassed or took out all S.H.I.E.L.D. security. Wrongly thinking that Jared had been tortured she tried to kill Colonel Fury, who Jared was holding in a bear hug.

However, Fury threw Jared over his shoulder, and Spider-Woman’s killing blow hit Jared.

Furthermore, Fury intuited that something was off. He dodged her attacks long enough to play video archives. These showed Jared conducting terrorist operations in Hydra garb.

Arachne apparently suspected something, as she accepted that the footage was real. Jared, apparently dying, also reflexively recoiled from her and dropped his act, confessing his disgust of her.

In tears, Arachne fled before S.H.I.E.L.D. could stop her.

Spider-Woman then stormed her Hydra base to corner Count Vermis. He told her what he knew, then almost escaped. But Spider-Woman was forced to crash the aircraft he was on to save her own life.

Meanwhile, Fury and his troops stormed the half-wrecked Hydra nest.

Having recovered her memories and again dodging S.H.I.E.L.D. troops, Spider-Woman hesitantly walked away from the wreckage.

See the second profile for what happens next ! 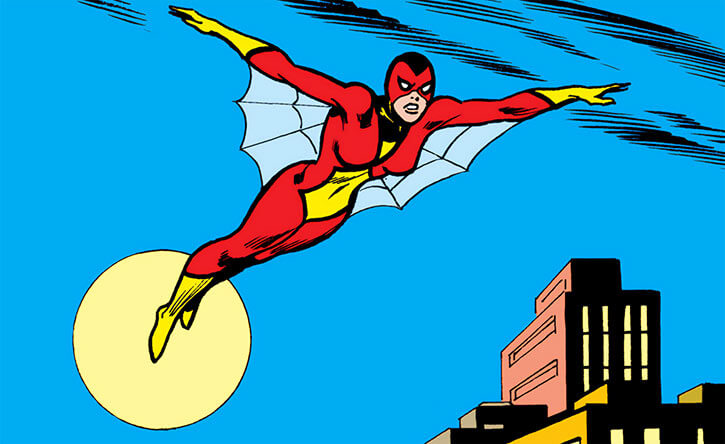 We have some room to constructively discuss some continuity oddities here.

Why did the New Men felt such instinctive aversion toward young Arachne ? We don’t know.

That’s what happens when you feed a stoner scrambled eggs !

While Mount Wundagore is in Transia, Arachne is recruited by a man based in the Carnic Alps.

We’d suggest it’s not a problem. The Hydra base Spider-Woman was deployed from is indeed in the Carnic Alps. But the village she lives in after leaving Wundagore is simply described as “a small Alpine village”.

And, with comic book lettering, it could easily be “a small alpine village” (small case “a”).

“An alpine village” is a cromulent description for a village located in the Osogovo area  . Which is roughly where fictional Transia lies in the Marvel Universe.

So Arachne did live in Transia, then moved to the Carnic Alps along with her handler some time after she was recruited. No problem here.

A slim, young brunette with curly hair and an amazingly fine waist.

Arachne looks completely human, to the point where her lovers didn’t realize that anything about her was off.

Though the colouring tech of those days wasn’t up to rendering it, the “wings” on Spider-Woman’s costume are made of glistening filaments similar to spider silk.

Impossible to say at this stage, really. She knows very little about the world and was fully manipulated by Hydra.

Howbeit she seems to be a naturally moral woman who wants to do just deeds. And find a place where she can belong.

She was full of anger when she attacked Fury and then Vermis. Arachne might have actually eliminated Fury for what he supposedly had done to Jared. However, recovering her memories about accidentally slaying her Transian lover likely changed her willingness to kill.

Still, Arachne is an angry person. Especially after she discovered how she had been manipulated by Count Vermis. Her assault on Hydra likely left multiple casualties.

She also seemed to think that her nature as a spider was monstrous.

“[A] ‘different species’ ?! B-but… with the spider-like powers I possess that could only mean…”

“Finally I know who — and what — I am ! The only thing I don’t know is if there’s any way I can live or survive with that knowledge !”

Arachne could come from Kamandi’s future on a time travel mission, which accidentally made her an amnesiac.

MPR (being startled may result in involuntary venom discharges. This is just a MPR since wearing her gloves prevents that), Misc.: Amnesia, Misc.: the Attitude of animals (and perhaps people with animalistic senses) toward her is automatically lowered by one step.

The Power Reserve approach for the COSTUME is arbitrary, and based on a caption. But it seems reasonable.

Likewise the venom blasts are set to have the dual nature observed between the captions and the panel.

The blasts’ Range differential is based on a remark wherein her blasts are lethal if delivered from too short a distance.

Arachne may have other agent-style Skills. You could check the generic S.H.I.E.L.D. agents stats in the Nick Fury entry for ideas.

The profile for Bob, Agent of Hydra is probably less useful in that regard.

The costume is abstracted out, since there isn’t much leeway with Wall Crawling or Flight in M&M.