Champions is one of the early, classic super-hero tabletop role-playing games. Its first edition was in 1981, and it still endures as of this writing (2010s). It has its own roster of characters, many of whom appeared across the decades and editions.

Spike is from the Dark Champions supplement, published back when all comics had to be grim and gritty.

Like most of our Champions profiles this is a MEGS version of the concept, not a point-by-point conversion.

Spike wields a pair of spiked gauntlets. These turn his every punch into a wicked, deadly attack.

He prefers to attack isolated opponents, and his weapons mean that he has to work up close. If denied either of both of this conditions, he’ll bide his time.

In 1990 a Mafia hitman known as Dante Guariglia built a pair of spiked gauntlets as a gimmick weapon. He used them for about a year. This did draw strong Mafia attention, but before he could be offered a promotion he was killed by vigilante the Headless Hangman.

The gauntlets became evidence. However, a corrupt cop named Harold Grimes stole them, wanting to use them as moneymakers. He started attacking pushers and numbers runners. His stupidity was only exceeded by his tremendous luck, and he survived for six months before being shot dead by Mafia gunmen.

One of the gunmen, Stephen Morelli, secretly kept the gauntlets. Like Guariglia and Grimes before him, he saw them as his ticket to the “big time”. However, he was a bit more clever than his predecessors. He had a suit of armor custom-built, and it is as Manelli that he convinced his caporegime to hire his alter-ego, Spike.

Spike offers his ervices to the Mafia and some independents, and enjoys a considerable local success.

The armor is brown, and worn above a black bodysuit.

Spike III is a savage, almost sadistic man with no compunction against killing or grievously injuring people. Although he tries to look like a big, dumb thug, he’s a fairly clever man who put a lot of forethought in his work.

Unlike Guariglia, who went out of his way to kill as many people as possible with his hands, Morelli’s goal is simply to get rich without getting captured.

Spike would be Nightwing villain, and would have worked for Blockbuster back the 1990s.

By Sébastien Andrivet (MEGS adaptation) from a Murderer’s Row writeup for Champions. 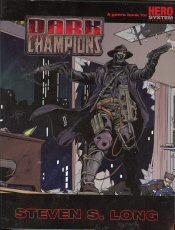