Spike has unusual fighting prowess in a world set mostly in a realistic albeit cinematic Genre. He’s a Jeet Kune Do fanatic who reveres the now historical figure of Bruce Lee, and his level of skill would make Lee proud. He can defeat several unarmed casino bouncers with ease, and it takes someone as exceptional as Vicious or Ed’s father to defeat him.

He’s also an ace pilot able to maneuver his one-man fighter in narrow spaces at high speed. Furthermore, he’s a formidable gunfighter who repeatedly stays the only one alive in vicious firefights against mob enforcers.

Spike’s extraordinary speed and endurance allow him to survive situations and wounds that would kill almost anyone else.

A trailer showing typical visuals and the characters. And it’s on an official YouTube account, so it won’t be deleted as soon as I have my back turned. Probably.

Spike’s life is known only through flashbacks and a few scattered words. He used to be the protégé of an Elder of the Red Dragon Syndicate triad, and was close to another top lieutenant en enforcer, Vicious. Their friendship ended up in tragedy. After Spike was badly wounded he was saved an nursed to health by Julia, Vicious’ beautiful girlfriend.

Vicious became insanely jealous and gave a gun to Julia, telling her to shoot Spike down when he would come back. Julia fled the untenable situation. Spike was badly wounded again, lost an eye (the replacement is a bit redder than it should be) and had to flee.

Vicious started building his own power base. He became en evil, ruthless crime lord who ultimately killed off the Elders of the Syndicate.

Spike became the partner of a bounty hunter named Jet Black. Both agreed to ask no question about each other’s past. The now roam the solar system in Black’s ship, the Bebop, trying to make ends meet.

Over time they picked a few partners (Faye Valentine), pets (Ein) and kids (Ed) who have become part of the Bebop’s crew and bounty hunting operation.

His tie is never fully closed, always staying low and opened. He also smokes a lot of cigarettes.

Spike is forever cool, smiling and confident. He is proud inside of his remarkably reckless nature and his ability to survive the risks he routinely takes. He’s your typical cool, flippant action hero, and behaves like an old couple with Jet. He likes annoying the self-centered, griftery Faye, as both he and Jet are seemingly immune to her charm.

While he seems like a very classic hero, there is something strangely, subtly hollow and empty in Spike. He often seems oddly absent and bluesy, despite keeping his cool and quirky façade. He has admitted that he considered himself to have died when Julia fled and he fought Vicious, and that his subsequent life is but the dream of a dead man.

An… energetic live rendition of one of the main Cowboy Bebop musical themes, Tank!.

The original soundtrack, by Yoko Kanno, is a critical part of Cowboy Bebop. Its dense mishmash of styles and references smartly reflects the similar approach to the visuals and storytelling.

(About how he sees his own life after Julia) “I’m only watching a dream I’ve never awakened from.”

Cowboy Bebop is set in a futuristic universe with cybernetics, in-system spacecrafts using gates to travel from planet to planet and a few energy weapons and super-computers.

Nevertheless, it is very close to something that could take place in the late XXth or most of the XXIst century. The guns are certainly stuff that has existed since the 1970’s.

Thus, having Jet and Spike operate in the DCU is quite possible. The Bebop could simply be a large truck with vast living quarters, and the Swordfish II an armed sports bike.

Helper(s): Checked Surbrook ’s writeup to make sure I hadn’t forgotten something. 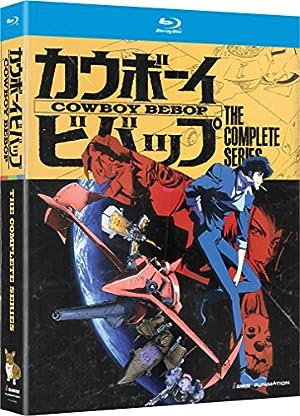 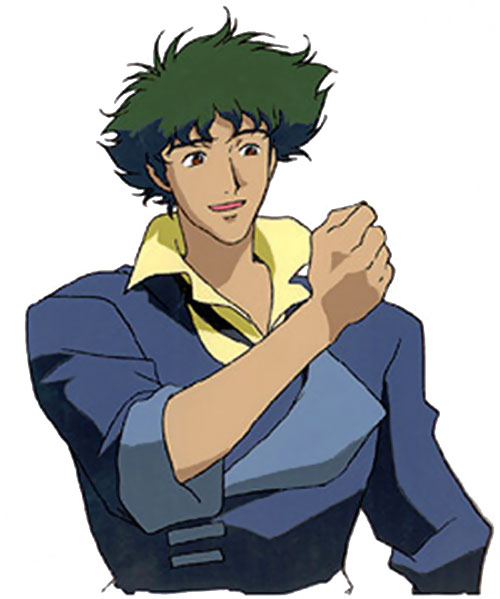 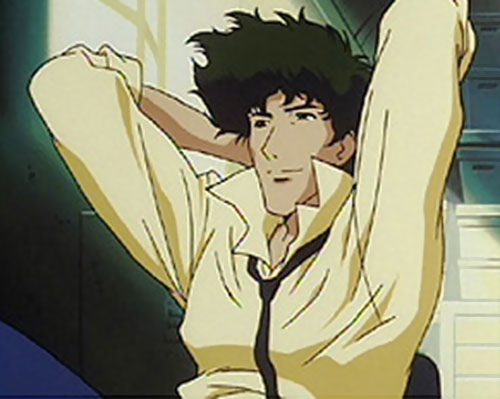