Miracles was a one-season 2003 TV series. Though it drew from 1990s classics (notably X-Files), it apparently drew little audience and was soon cancellatored. It was about a former investigator of the Catholic Church and seeming supernatural phenomena.

I’ve classed this entity under “Spirit Guardian”. Any twin buried on the holy land will produce another such being with similar powers and an identical attachment to their sibling. It doesn’t have to be the specific character we see in the show.

Jimmy Prescott is a ghost with the power to create a superhumanly strong, agile and durable physical form for himself. He can be solid but invisible, or visible and insubstantial.

He also has a psychic link to his brother which Travis can use to restrain Jimmy from violence as long as Travis remains conscious. But when Travis falls asleep or is knocked out, Jimmy is almost entirely free to act, except that he still can’t directly hurt those Travis cares most about.

Sheriff Prescott was a respected law enforcement officer in the small town of Red Deer, Michigan. Yet he was fundamentally an abusive thug who beat his pregnant wife. As a consequence, she miscarried one of the fraternal twins in her womb late in her pregnancy. To hide what had happened, she buried the stillborn child in the woods outside town.

However, the ground was holy to the original inhabitants of the region. When twins were born there, one would be abandoned. That would bind their spirit to their sibling as a formidable weapon.

When Travis, the surviving twin turned 13, the ghost of his dead brother returned to seek vengeance for Travis. It first killed those who were in a position to try to do something about Sheriff Prescott’s abuse of his son, like the school nurse and the local priest. It then killed Sheriff Prescott himself.

When visible, a leather-jacketed blond young man, rather good looking, but devoid of the personality that would otherwise make him attractive. He doesn’t look much like his brother, who is a shorter, younger-looking brunette.

A monomaniac who is little more than an extension of his brother’s subconscious desires. He punishes those who hurt his brother, but is friendly to those who honestly try to help Travis, even if their efforts are useless.

He could not kill their father until Travis finally stopped loving him and killed the others out of frustration at being unable to kill his real target.

He faced the Titans as they tried to stop his revenge rampage.

Bonuses and Limitations:
Spirit Travel and Invisibility are Mystic Linked and elementally linked along with True Sight. 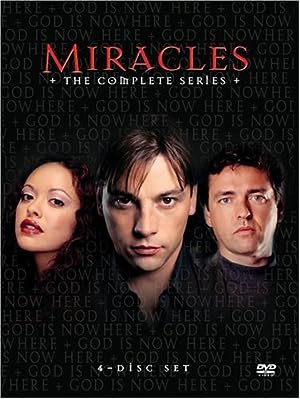 Miracles – The Complete Series on DVD