Wileaydus can will his transformation into the Spirit of Vengeance at any time. He will turn into a skeletal figure with a burning skull. As the Spirit, he has superhuman strength and resistance to injury, rapidly healing any damage he does take.

His leathers are covered in spikes, which he can grow and project as missiles. He can also project blasts of the hellfire that engulfs him, or conjure up his Death-Cycle.

The Death-Cycle can fly through air or in space, is covered in the same hellfire as the Spirit, although this can be controlled to allow passengers to travel unharmed, and it has a nasty lance at its front, which the Spirit has no hesitation in using. If it’s destroyed, the Spirit can simply conjure another undamaged Death-Cycle, at will.

All Guardians wear the star-shaped communications device, which also allows them to access their ship’s teleportation system.

Wileaydus is a native of the planet Sarka. He is a secret opponent of the Planetary Protectors, enforcers of the Universal Church of Truth which dominates the planet. Unhappy with the occupation, Wileaydus was willingly inhabited by the Spirit of Vengeance entity under unspecified circumstances. He was happy to have the Spirit battle the Universalite forces.

When he learned of an unidentified craft entering the system, he assumed it was Universalite reinforcements coming to hunt him. He instead discovered the Guardians of the Galaxy. After a brief conflict due to a Universalite team member, he reached a truce with them. Thus, they helped him battle Universalite oppression.

They parted on good terms. The Spirit seized a Guardian Star from the body of the Grand Inquisitor who had taken it when they were his prisoners.

When Mainframe’s planet was in danger, Guardian Martinex summoned all members with Stars. The main team of Guardians were in another time, but the Spirit answered the call, as did Replica, Firelord, and Hollywood.

Together they protected the populace. Then they discovered that the power drain was due to the Intimidators (formerly known as the Minions of Menace). These were attempting to revive Korvac.

Martinex’s group were too late to stop them. But Mainframe loosed Phoenix from the suspended animation he had voluntarily entered, and he managed to destroy the newly awakened Korvac. Martinex convinced the others to join him in forming the beginnings of the Galactic Guardians.

Responding to a distress call from the Guardians of the Galaxy, the Galactic Guardians came across a breach in space. They discovered it to be the work of the plague-carrier, Bubonicus. They encountered Bubonicus, who easily defeated their most powerful members, including the Spirit.

Martinex and Replica tricked him by having Replica take Martinex’s form, while he hid. When Bubonicus attacked her with a virus targetted at Martinex’s genetic structure, it failed. Thus, they managed to take him by surprise.

The recovered Phoenix then helped Eternity by cleansing it of the infection. He then returned to the Icarus to do the same for it’s team mates. The captive Bubonicus disappeared during this cleansing.

The two teams, along with the Ancient One, battled Dormammu. The battle saw Dormammu kill the Ancient One. But it was eventually won, when Talon aided Krugarr in the sorceries necessary to vanquish Dormammu. The Galactic Guardians gave the Guardians of the Galaxy their ship, and returned to Mainframe’s world.

The Spirit continues to operate as a member of the Guardians of the Galaxy.

The Spirit is a single-minded, obsessive, being. He’s determined to see that evil is punished and justice is done, and is especially opposed to the Universal Church of Truth. It is intractable in its view of them, seeing everything in black-and-white terms. Thus, he frequently comes into conflict with fellow Guardian, Replica, who is a Universalite.

It approaches problems in a direct, blunt, manner, frequently ignoring calls for a more tactical approach.

Wileaydus hates the Church for what the evils he sees them as having done to his world. Therefore, he is content with the methods the Spirit uses to oppose them.

“They will know what it means to face the fury of… the Spirit of Vengeance !”

“They shall pay in blood for the blight they have inflicted on my world !”

“Let the fires of Kauri flow forth from my fingers to create the Death-Cycle ! And let those who revel in blasphemy know the true meaning of vengeance !”

The Spirit of Vengeance is fragment of the Spectre, which was split off by an unknown event. It randomly moves around the universe, inhabiting certain individuals who burn strongly with the desire for revenge, and leaving them when their anger burns out.

The Death-Cycle is currently written purely as a (non-removable) Gadget, but there was some discussion over whether or not it should be created via a power.

If you wish to use it in this way, then you could use Fabricate (at around 25 APs), Force Manipulation (at a much higher level), Mike’s Spirit Steed Power (see the New Powers article), or some other Power which allows the character to create the bike with its abilities. 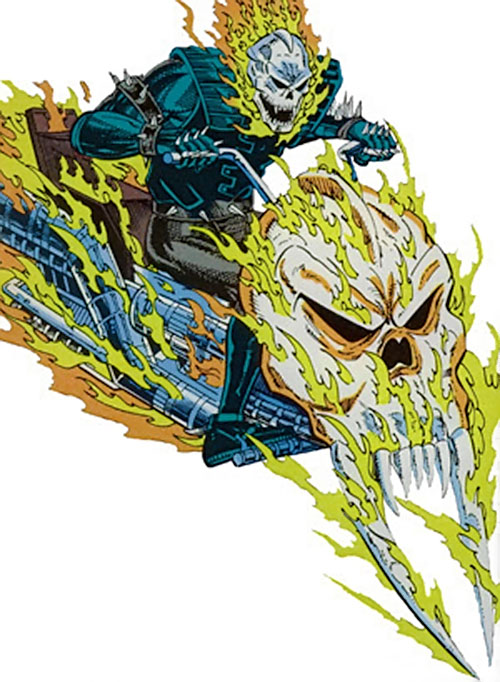 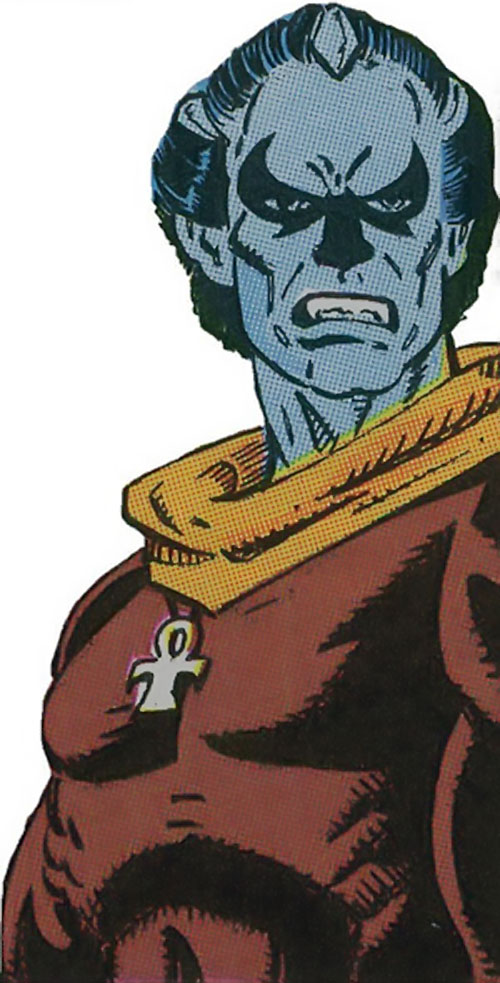