The important question of the Falsworth peerage yet has, perhaps wisely, to be explored by Marvel writers.

In the sadly short-lived Captain Britain and MI13 series, Jacqueline is called “Duchess”. But it seems safe to assume that this title was given in jest, as an exaggeration.

Not only is a Duchess very senior nobility, but the title is accompanied by a special protocol and naming conventions. These were never observed toward a Falsworth in published material, even recent material from a British writer.

I would suppose that the Lord Falsworth was a Marquis. But this is just a wild guess based on quick descriptions of how old and influential the Falsworth family is. Furthermore, we are going to assume that the word “Falsworth” is both the family name and the title, the later corresponding to a geographical location called Falsworth.

This is not the normal case. Usually, the title and the family name do not coincide. But this is what most closely matches Marvel sources.

Keeping with the hypothesis of Monty having been a Marquis, Jacqueline’s brother Brian (who never inherited the title) would have been considered an Earl and called Lord Brian Falsworth. Jacqueline would have been Lady Jacqueline Falsworth, but *not* the Lady Falsworth (that was her mum).

The estate of the Falsworth has consistently been described as being a relatively short distance from London but in a rural area. This presumably means the Home Counties . My guess would thus be that Marvel Earth/Earth-616  has an extra chunk of land in the Home Counties, called Falsworth.

A 2004 story then places Falsworth Manor in the fictional town of Dymhurst, of unspecified location. This was confirmed in a 2010 sourcebook.

The Crichton title, and inheritance

Jacqueline later married one Lord Crichton, of unknown peerage. He might have been a Marquis or an Earl. In both cases Jacqueline, after her marriage, becomes the Lady Crichton (being the wife of a noble is different from being the daughter of a noble, so the naming conventions change).

Note that Marvel presents Lord Crichton as a *another* man whose title is also his family name. Which is starting to seriously stretch suspension of disbelief.

After Crichton dies, Jacqueline formally becomes the Dowager Marchioness or the Dowager Countess Crichton, depending on what Crichton’s title was. But usually the “Dowager” is dropped when addressing people of Jackie’s station. Jac’s son Kenneth became the Lord Crichton after his father’s death.

Marvel sources refer to Jaqueline as the Lady Crichton. Based on that we can assume that the Falsworth peerage is not among the rare ones with special rules allowing women to carry it. The British nobility system is not exactly women-friendly. Females are generally ignored when it comes to inheriting titles, with the rather important exception of the Queen.

Since both Lord Falsworth and Lord Brian Falsworth are dead and have no living male children, the Falsworth title is likely now held by Jackie’s grandson John, as is the Crichton title.

While Spitfire is generally listed as being subsonic, several flashbacks depict her as being supersonic. For instance she is seen outrunning bullets.

These flashbacks can generally be assumed to take place in 1944/45. This allows for the simple hypothesis that her speed and power increased during the war as she practised. This is what is reflected in the DC Heroes RPG statistics for this entry.

Spitfire also demonstrated new field skills as the months passed. She presumably trained with the military and the Invaders.

With all these small differences in skills and powers, doing separate profiles was deemed simpler for game stats purposes.

In late 1942 or early 1943, Jacqueline was supporting British troops on the battlefied. However, her lack of experience resulted in her being caught in a shelling. While she survived unharmed, a young combat medic who rushed to her aid was gunned down before even she could react. Spitfire felt that this death was her fault, and guilt over this kept eating at her for decades.

The remainder of Spitfire’s war time activities is largely unrevealed. There exists a scattered wartime flashbacks, though in most cases it is impossible to tell the larger context. Since in most such flashbacks Spitfire displays a higher speed than in her original appearances, they can be assumed to have occurred in 1944 or 1945.

The storm is gone

Spitfire’s powers then faded over the years. By 1950 her blood was reportedly back to normal and her powers gone. But the loss of her powers was actually psychosomatic, and tied to the Norwegian murder in 1940 or 1941, the medic’s death in 1942 or 1943, a massacre in Netherlands in 1945, and perhaps other wartime incidents.

Jacqueline could still produce bursts of superspeed under extraordinary circumstances, but was retired as a superhuman.

Meanwhile, Roger Aubrey assembled the V-Battalion, which became active in 1951. Both Montgomery Falsworth (as a sponsor) and Brian Falsworth (as Union Jack) were major contributors to that clandestine organisation, inspired by the American All-Winner Squad. Jacqueline was also a member, but not in a field capacity. 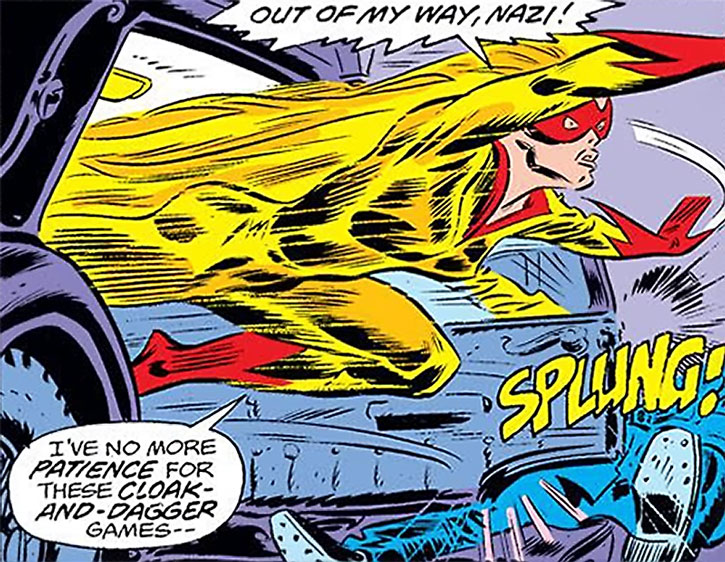 In the early 1950s, Jacqueline started a romantic relationship with one Lord Crichton, whom she married in 1956. In 1953, Brian Falsworth was killed in a mundane car accident. It is apparently after losing her brother that Jacqueline stepped down from her position with the V-Battalion.

Jacqueline had a son, Kenneth, circa 1960. Howbeit, her husband died when their son was a teenager. While the Lord Falsworth had hoped that his grandson might become the next Union Jack, Kenneth suffered from anaemia.

It was suspected that this was caused by her mother’s unique blood. But in hindsight, it seems more likely that it was a consequence of Jacqueline being unknowingly a sort of living vampire. Kenneth came to resent his mother, as he saw her gift as his curse.

Despite this Jacqueline was very protective of her son, though usually in a distant and formal way. Thus, she was relieved that his medical condition prevented him from ever risking his life as Union Jack. Beyond the anaemia, Kenneth was an artist, not a fighter, and thus wasn’t interested in carrying on the familial tradition.

As per the previous writeup.

“Good show, RAF ! That will teach those ruddy blackguards to stay on their own side of the Channel !”

“All right then, Jerries ! Shall we see how two members of the ‘master race’ fare against one ‘helpless and inferior’ woman ?” (Sha-Blaff !)

Bonuses and Limitations:
Acrobatics is Contingent Upon Superspeed.

* Without Defensive Roll
** With Superspeed 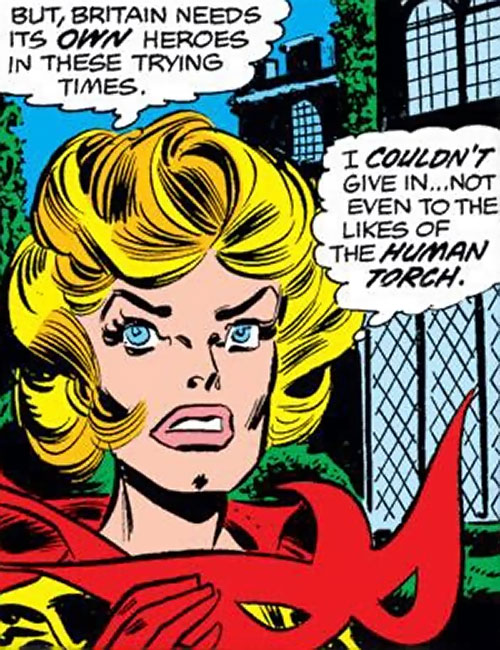 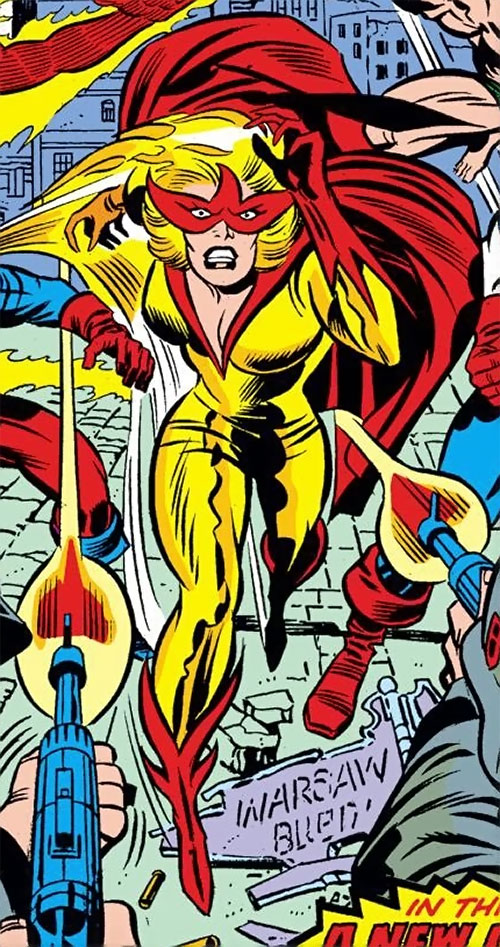 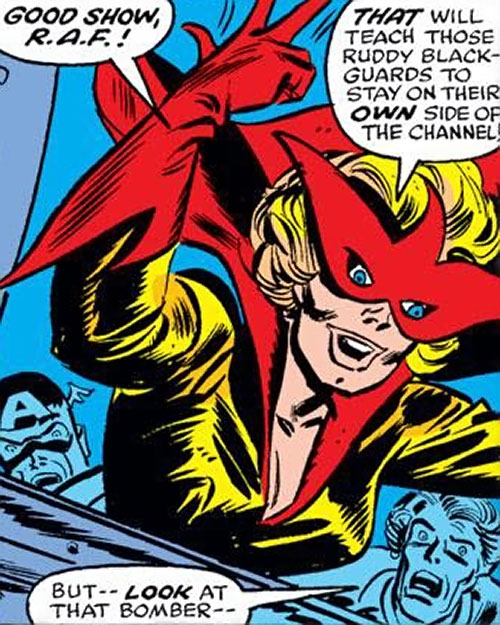 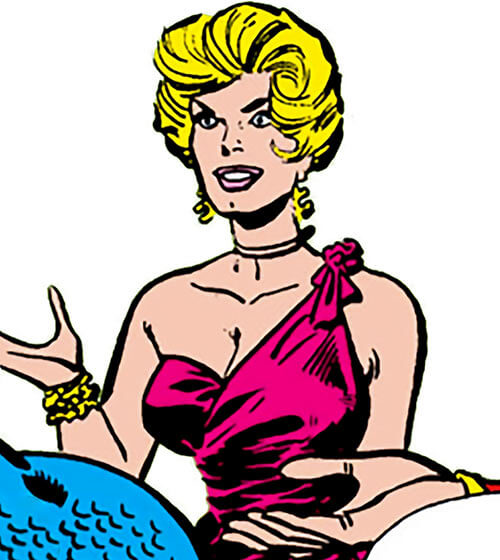