Splice is a formidable close-combat specialist and acrobat.

He wears a strength-enhancing, concealed armour allowing him to engage Wonder Man in combat. This suit can resist powerful superhuman blows. Splice also sports a large arsenal intended to allow him to engage a wide variety of superhuman targets. He sometimes throws his pellets by hand, and sometimes uses launchers on his wrists.

During their second clash with Wonder Man (and the Crazy Eight), Rampage added ion-specific weaponry and detectors to Splice’s arsenal.

Splice has unusually high Hero Points  for a hired killer. But Wonder Man usually didn’t spend Hero Points  against Splice, or the fights would have been much shorter.

Splice is a former Los Angeles area actor. His career never took off. At one point he landed a role in a sitcom, but the child star didn’t like him and had him fired. After having been canned by a 11-year old, the actor decided to find a more dignified job as an assassin.

One of his early contracts was said child star. The kid was washed up, and burned the drummer of a big rock band in a dope deal.

Splice specialises in the cinema industry. He once described a typical contract for him as “cutting out” two teenage hookers, to bury a famous sitcom actor’s sexual indiscretions. He also once was hired by crooked producers to kill mean cinema critics.

It wasn’t explained why Splice is equipped with enough firepower and damage-sustaining ability to tango with Wonder Man. He appears to usually kill civilians.

A side-market for Splice is that he often films his own hits, in order to sell them as well-produced snuff movies. This also gives him an excuse to be more daring than he should be when carrying out a contract – and pull off high-speed acrobatics.

One of his henchmen, Ellis, once betrayed him. Ellis sided with a Splice client to market the video of Splice’s bloody exploits on a larger scale. The illegal movie, Splice & Dice, grossed 2.6 mils. Furious at being cheated out of his fair share, Splice killed Ellis and the four producers.

Splice clashed with Wonder Man twice, during Wondy’s solo Hollywood career. Both times he was working for LA crimelord Lotus, and he teamed up with Rampage for the second attempt. During the first clash he was defeated by scriptwriter Alex Flores. She electrocuted Splice from behind, using a severed cable.

Then Lotus hired Splice to take out the Crazy Eight. This was a group of people living close to Simon Williams and who had gained ionic  powers from this exposure. The fight between Splice, Rampage and the Crazy Eight was brutal. Splice stuck a knife into Alex Flores’ chest, slaughtered several clones of Spider, and depowered several of the Crazy Eight.

Splice and Rampage would have slaughtered the entire Crazy Eight. But Flores managed to warn Wonder Man. Then another of the Crazy Eight used her time-manipulation powers to displace Wondy into the past, before the carnage was done. But she only could take Wonder Man to a point after Alex Flores had been knifed.

Enraged and highly driven, Wonder Man took out Splice and Rampage. But rescuing Flores from her coma would prove a challenge, taking Wonder Man to Hell.

Splice is a confident professional, and a casual killer. In combat he’s highly analytical. He tries different kinds of projectiles to observe their effects on his target. Splice stays highly mobile to gain an edge. He’ll also try various, savvy tactics.

He has no problem with running away to regain initiative or position himself. Splice also prefers attacking from a distance if his target doesn’t seem to have ranged attacks.

His main weak points is that he loves hunting and killing, even defenceless prey. If a victory would be too easy, he’s likely to leave a fighting or fleeing chance to his target to spice things up.

Splice also hates, hates, hates not being paid fairly. He will soon get all revenge-like and murderous if he feels he doesn’t get his fair share.

Lastly, he hates defeat. Splice can be downright brutal when pursuing revenge – a stone cold killer.

“So, a shockwave pellet is more disruptive to a ionic body than a straight electroshock. I’ll have to remember that.”

“Splice. Confidential Services. I’m the last step in the production of your life. I’m the one who leaves you on the cutting room floor, baby. I’ll cut you out so quick and clean, it’s like you were never in the picture.”

“Gas is not good, must not have normal lungs. Shockwave is still best. Electro isn’t bad, maybe a combination… Have to keep him talking…”

“Hey Marston — I hope you’re getting all this — ’cause I only do one take !” (kills his target)

He would have been a decent Superman villain. Presumably with red sun pellets instead of ion dampers.

Splice had two henchmen working with him. But these are more likely to intervene in low-risk contracts than when a superhuman is involved.

Ellis, a “Clint Eastwood type”, was Splice’s driver. He had Vehicles (land): 05 and usually drove a Porsche [STR 04 BODY 06, Running: 07]. He may have been replaced by another, comparable driver.

As for Marston, he’s just a young cameraman with a baseball cap.

Helper(s): Roy Cowan (who revised his Wonder Man writeup for the occasion). 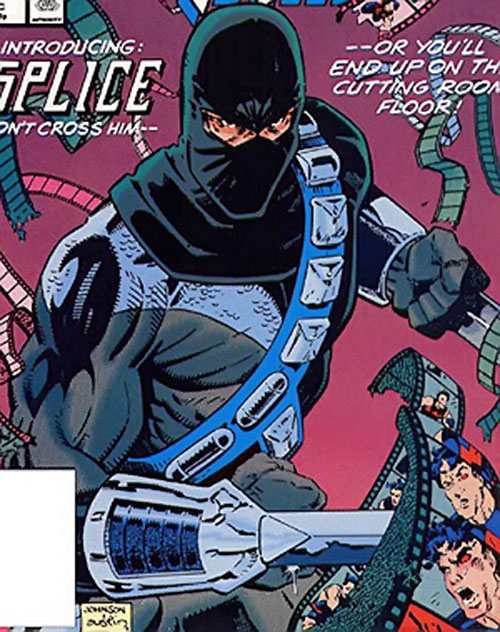