However this trainings occurs in a few relatively short spurts rather than as a systematic program. Thus, while she’s better than before, the improvements aren’t spectacular.

At this stage Stephanie isn’t yet a superior fighter, but Black Canary deemed her talented. The training with Batgirl also allows Spoiler to learn years’ worth of hand-to-hand combat knowledge much more quickly than normal – and leaves her with an extremely robust, healthy foundation that she will later build on.

On the other hand Stephanie no longer has her Honda motor scooter (presumably because she didn’t have a license), and had to make do with a BMX bike until she convinced Batman and/or Oracle to loan her enduro motorcycles.

She sometimes carries a messenger-style bag under her cape.

In 2001, Batman (Bruce Wayne) decided to invite Spoiler to join his informal clan of vigilantes. He also told Stephanie that Robin was Tim Drake – without his knowledge or consent.

Though Stephanie was looking forward to reconciling with Tim, Batman’s tactless initiative went very poorly with Robin. Tim stopped talking to Bruce for a while. He and Stephanie managed to patch things over as they wanted to resume their relationship, but Drake’s complicated life made that a drawn-out process as they couldn’t see each other much.

Stephanie found the training Batman put her through gruelling, and Batman himself a stern and scary taskmaster. She was also unsure of why she had been recruited.

She gradually realised that much of the bat-squad was on poor terms with Bruce. He no longer had field partners he could rely on. She thus had been called in to help man the trenches until the situation improved.

A few months later, the Cluemaster returned to Agnes and Stephanie’s home. He had been released from prison, the mortgage bore his name and Agnes Brown couldn’t afford to lawyer up against her husband. Unable to stay home, Spoiler moved to Black Canary’s place for a while. 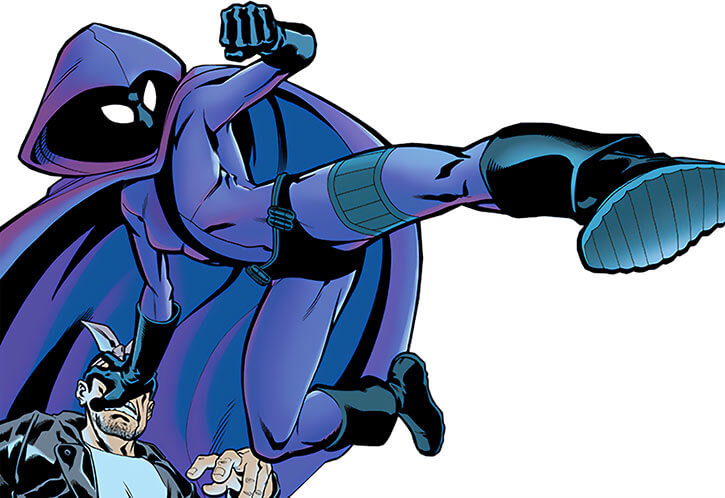 As a junior helper to the bat-squad, Spoiler assisted during the Last Laugh crisis, when the Joker took control over a small army of super-criminals by dosing them with one of his special toxins. During this event, Robin was briefly thought killed by Killer Croc.

When Bruce Wayne was accused of murder, Spoiler couldn’t help much. But she apparently trained some more with Black Canary, and helped Robin rescue a fellow high-school student kidnapped by mobsters. Oracle then detailed Black Canary to help Stephanie reclaim her mother’s home.

Though Dinah was initially unenthusiastic about the mission, seeing the Cluemaster, his ally the Riddler, and the latter’s henchwomen Echo and Query squatting in the Brown house angered her. She barged in, flattened everyone and threw them out for good.

However, Oracle then told her that they wanted her to stop being Spoiler. At the same time, Batman stopped contacting Steph. They apparently had both rebuilt their field teams and no longer needed a light outrider. Batman also forbade Cassandra from training Steph, which ended the girls’ hard-won friendship.

Stephanie was unsure of what to do, though she and Robin decided to continue dating in their civilian identities. They agreed not to have sex yet, though – presumably because Tim did not feel emotionally mature enough.

A further blow then came in, as the government announced the death of Arthur Brown to his family. Though officially he had died in a prison accident, the Cluemaster had actually been killed in action during a Suicide Squad mission.

To her dismay, Stephanie came to realised that she grieved for her hated father. She even tricked Black Canary into letting her reach the Riddler, the Cluemaster’s last associate, to ask questions about Arthur Brown.

The psychotic Riddler would only answer in riddles, and the frustrated teenager ended up punching him. 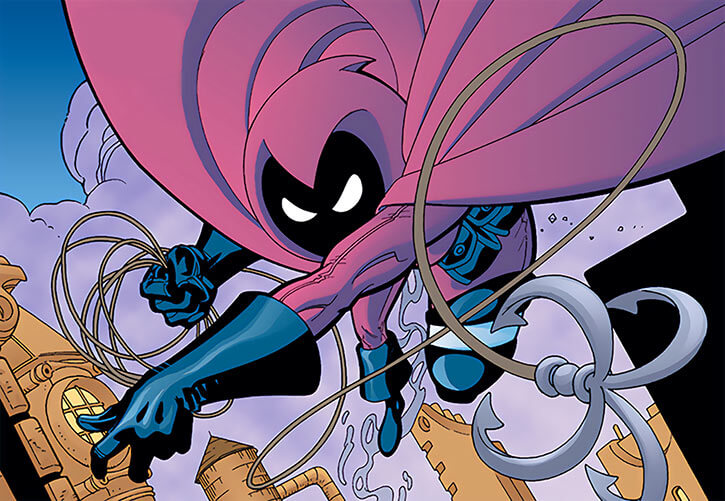 Agnes Brown took the news even more badly, and Stephanie couldn’t stand how the grieving widow retconned  her husband into a good person.

Steph ended up cashing part of her meagre college fund to live by herself in a cheap flat. Robin realised what was going on and convinced her to return to Widowstone Creek. He successfully brokered a sustainable reunion between mother and daughter.

Spoiler resumed her costumed activities against minor criminals, and was even briefly reactivated by Batman to help against the Network run by Athena (Celia Kazantkakis).

Spoiler eventually confronted Batman on a rooftop, demanding to resume her training. Batman challenged her to stop a terrorist threat within hours. Spoiler did her best but was out of her depth.

As the clock ran out she realised that Batman knew that she would fail, and had been running a contingency plan all along. He then essentially fired her. 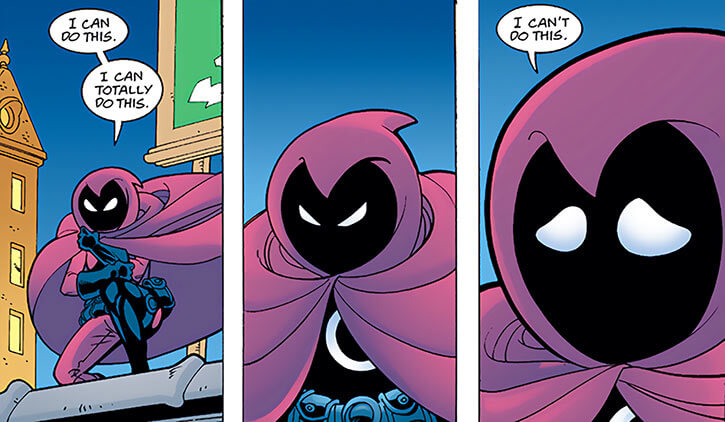 Devastated, Steph retired for a time, though she and Tim (who soon celebrated his 16th birthday) continued dating. Unsinkable, Steph resumed being Spoiler, which allowed her to respond along with Robin to a murderous rampage by Johnny Warlock.

The two youths saved each other’s life but Robin had to seemingly kill Warlock to stop him. This destroyed his morale, but Steph helped him butch up and overcome his doubts. However, Tim soon had to stop being Robin after a major clash with his father.

Knowing that Batman needed a Robin and didn’t have a replacement handy, Steph went for the chutzpah – she sewed herself a Robin costume, sneaked into the Batcave and offered her services.

During this era Spoiler sometimes styles her hair shorter since it’s more convenient to wear the Spoiler hood.

When working with the bat-squad or the Birds, Stephanie is more cautious than before. She’s no longer going out for fun to take on suburban young toughs and basic loser criminals. She’s now on the edge of a far more dangerous world, and she knows that she can quickly get out of her depth.

During this era, Steph doggedly creates an unlikely friendship with Batgirl (Cassandra Cain). Spoiler is determined to have Batgirl teach her the martial arts, and reasons that a girl her age is going to be much more easy to establish a rapport with than Batman.

Though Batgirl doesn’t know much about friendship or tact, Steph eventually wins her over through her sheer determination to learn and improve herself. They also connect over their respective experiences with their criminal fathers.

Spoiler finds it difficult to fit in. Oracle doesn’t like her, Black Canary treats her like a kid, Robin is often unavailable, and establishing a functional friendship with Batgirl takes months.

This sharpens her insecurities about people seeing her just as the Cluemaster’s daughter rather than as somebody they can trust, and about the people around here being monstrously gifted whereas she’s “merely” talented.

Though she sometimes wobbles and hesitate, Steph remains determined to prove herself by developing her skills and competence. She gets a lot of mileage out of any shred of positive reinforcement.

She has a lot of nerve for somebody her age. She’s not going to confront deadly menaces or the supernatural without being really scared, but when it comes to mundane circumstances she’ll do stuff most people only dream of having the courage to do.

If necessary Stephanie will lie and manipulate to reach her ends, as she’s used to doing whatever it takes without relying on anyone. She has even occasionally lied to Robin, though she couldn’t stand doing so and ended up telling him the truth.

Her insecurities continue to make her feel jealous about pretty girls within the same zip code as Tim Drake, but she has obviously learned from her previous excesses and can rein her fears in. Even Tim doesn’t realise how jealous Steph can get, as she remains determined to be at her most pleasant when they’re together. She calls him “sweetie”.

Steph’s relationship with her mother continues to improve. Stephanie is far too stubborn, independent and self-reliant for her mother to wield any parental authority, but they otherwise manage to cobble functioning familial ties and care for each other. This nearly breaks after Arthur Brown’s death as Agnes slid back into being pathetically weak.

However, a bit like her daughter, Agnes has an unsinkable character to her and rebuilt herself as a much stronger person over the following years.

When stressed Stephanie tends to go for mashed potatoes, chips and/or ice cream – with her aggressive exercise regimen, she can amply allow herself that.

(To herself) “Dear diary, I know what my next science paper is going to be called : ’My love/hate relationship with gravity‘.”

(To Batgirl (Cassandra Cain)) “ExCUSE me, some of us speak in MORE than two-word sentences.”

(After a sparring session with Batgirl an exhausted, wobby, sweat-drenched Spoiler finishes vomiting from system shock then somehow gets back on her feet)
(Defiantly looking at Batgirl) “So… same time tomorrow.”

(About her costume) “It’s not actually purple, you know. It’s eggplant. Purple would have looked stupid.”

Robin (trying to explain Batgirl’s behaviour to Green Arrow) “She has a lot of… issues.”
Spoiler (not helping): “Yeah. Like eBay has a lot of auctions.” 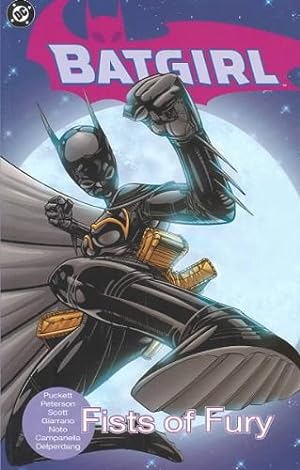 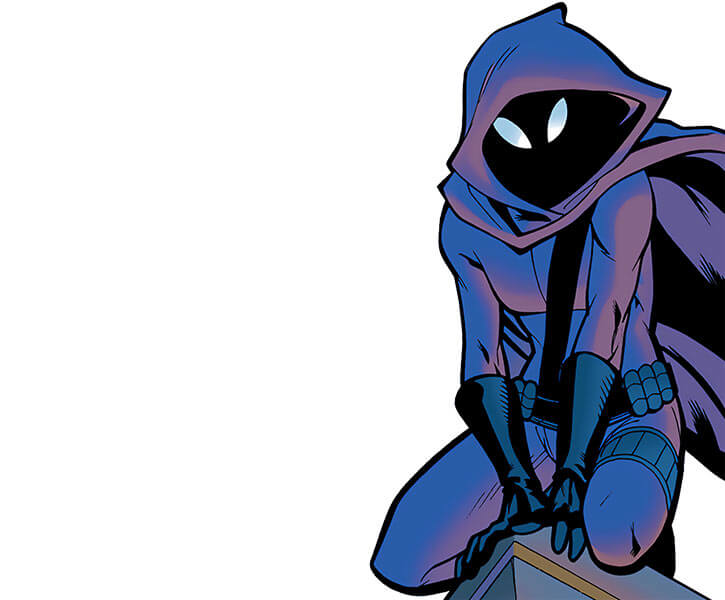 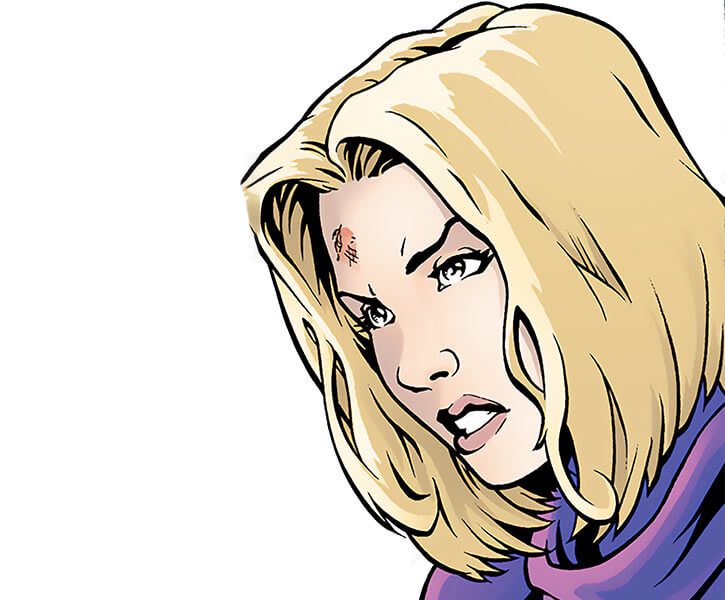 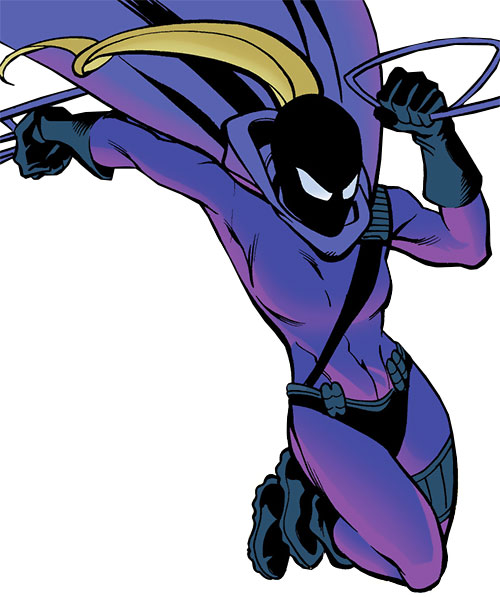 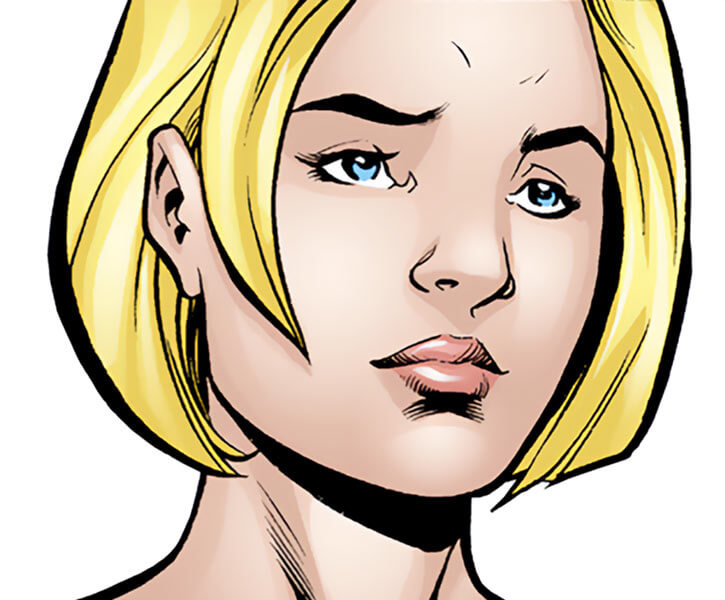