Spoilsport can move at very high speed, and easily defy gravity by moving along walls or ceilings. Although she tends to just punch or backhand people at high speed, those are in DC Heroes RPG terms considered Charging attacks.

She uses roller skating equipment to both enhance her speed and protect herself from collision.

Spoilsport is quite acrobatic. Skating reversed above a speeding train (along the tunnel’s roof) then doing a flip in mid-air with a full spin to land on the train when the tunnel ended, all the while dodging Jubilee’s fireworks, seemed relatively easy for her.

Spoilsport and Dragonwing the only White member of the gang. They might be runaways from a High Town White family.

Spoilsport acts every bit the shallow, flirty valley girl and general airhead. It is unclear whether it’s a matter of style and affectation, or her actual personality.

“Hi, guys ! I hope you don’t mind if we make this fighting thing quick-like. I’ve got a date later tonight, and I gotta go home and get ready, tee-heee !”

Bonuses and Limitations:
Cling only if at least 4 APs of Running are active (-1). 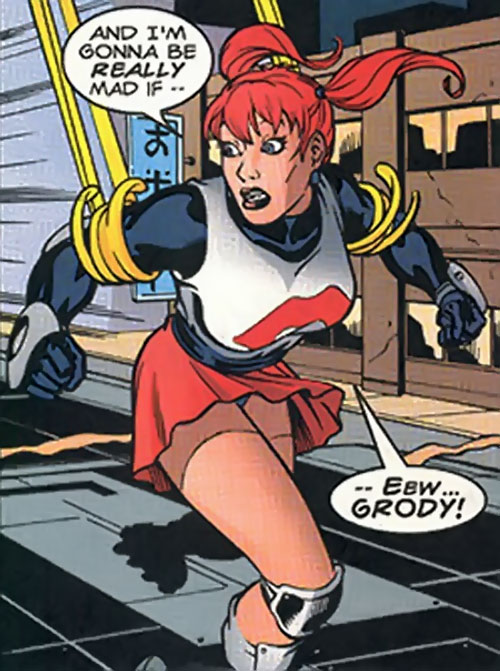