Sportsmaster does not actually possess superhuman powers. But his extensive training, experience and remarkable physique allow him to operate at a level commensurate to that of a low level superhuman.

His close combat skills are quite impressive. Even from his few appearances, it is obvious that he has been extensively trained and has experience with a variety of streetfighting forms and martial arts. This combined with his remarkable strength, stamina and speed make him a deadly foe.

Outside of his sheer physical power and training, Sportsmaster is also an expert in the use of most conventional weaponry. This includes firearms, bladed weapons, explosives, etc. Despite this, Sportsmaster chooses to utilize a unique combination of Olympic-themed weaponry to accomplish his goals. His personal arsenal ranges from explosive javelins to an incredibly heavy chained hammer.

Furthermore, Sportsmaster is a consummate professional. Over the years he has become an experienced soldier, assassin, and adventurer. He is very observant, resourceful and absolutely ruthless is battle, and shows absolutely no fear even when faced with overwhelming odds.

Fighting dirty seems to be second nature to him, and he is more than capable (and willing) to deliver a killing blow against a helpless or retreating foe.

Lawrence Crock the Sportsmaster is a career criminal. He ran afoul of the Justice League and its agents several times during his career.

During this time he married his partner, Paula, who had an extensive criminal history as well. Despite the turbulent nature of their lives, the two managed to settle down and start a family. The couple had two daughters that predictably began to follow in their parents footsteps.

Tragedy struck the family though, when a botched job not only caused Paula to be apprehended by the authorities, it also resulted in her permanent paralyzation from the waist down. While she recovered in prison, Lawrence did his best raise his two daughters on his own and continue his criminal career.

While it hasn’t been revealed exactly what happened between the two, Lawrence managed to alienate his oldest daughter while her mother was in prison. She ran away from home in the stillness of night, abandoning Lawrence and her sister Artemis to whatever fate awaited them.

With the disappeance of his oldest daughter (who would later resurface as the criminal assassin, Cheshire), Lawrence was compelled to focus his full attention on his remaining daughter Artemis. Though she was only nine at the time, Lawrence began to put her through a gruelling training regiment, preparing her for the brutal realities of the world he lived in.

The way of the bow 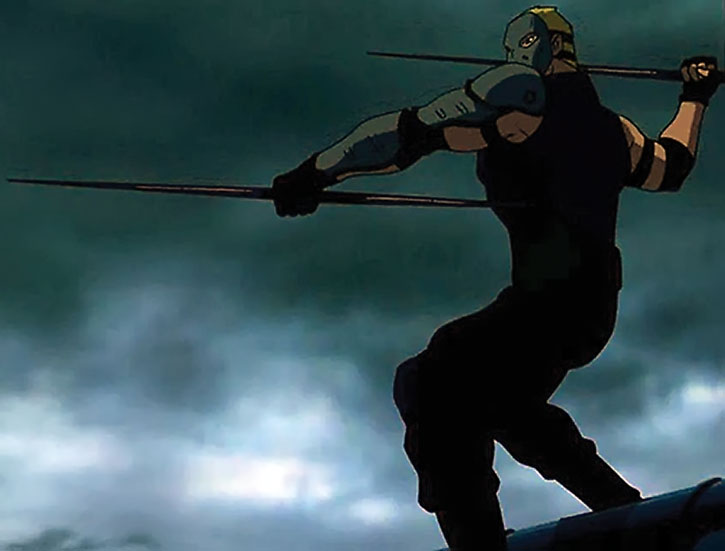 When Artemis turned 15, Paula was released from prison. One would think that Paula’s return would have made Lawrence happy, but it only made his life more complicated. Paula had reformed during her stay in prison, and wanted Lawrence to do the same.

Unfortunately, Lawrence couldn’t bring himself to turn away from the lifestyle that had been a part of him for so long. With that, he moved out of the small Gotham apartment that he shared with is family. He left Paula and Artemis on their own.

On the Light’s shilling

The next time Lawrence surfaced would be on July 22, shortly after the creation of “The Team”. While operating on the behalf of an organization known only as “the Light”, the Sportsmaster traveled to the island of Santa Prisca. He had been sent to acquire, via any means necessary, a potent new weapon for the Light.

Sportsmaster was in the middle of completing the transaction with Kobra, when he was interrupted by “The Team.” The resulting clash destroyed the not only the factory that was producing Venom, it destroyed almost the entire shipment of the weaponized formula.

Sportsmaster would have been forced to return to his employers empty-handed. However, he was able to escape the conflagration with a single ampule of the formula. After delivering the ampule to his current employers, Sportsmaster went to ground and waited for his next job. 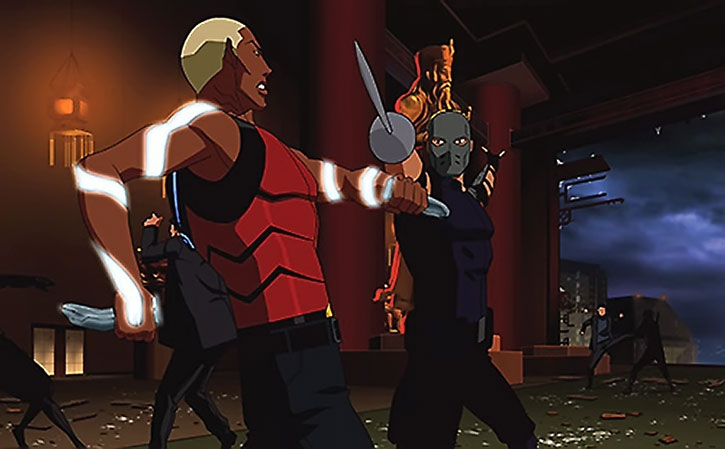 Over a month would pass before the Sportsmaster would emerge and return to action. On September the 7th he was sent to free Cheshire out of a prison in Taipei. She had been captured by the hero Red Arrow during a failed attempt to assassinate Lex Luthor. Luthor had been attempting to negotiate a treaty between the Northern and Southern regions of Taipei.

Sportsmaster, being a practical man, simply blew a massive hole through the outer wall of the prison cell that held Cheshire. This allowed her to escape. The two took to the air in an awaiting helicopter and flew off into the ever deepening gloom of the Taipei night.

As the two returned to their employer, Ra’s al Ghul, in an attempt to regroup they failed to notice that Red Arrow had placed a tracking device on the helicopter during their frenzied escape.

While the two awaited the master assassin, they bickered with a familiarity that can only be possessed by old friends or family. And despite Cheshire’s flat-out threat to take Sportsmaster’s life, he only responded with an almost amused “grow up” and ignored he aggressive behaviour.

They were eventually interrupted by Ra’s Al Ghul who came to instruct them on their next steps. Ra’s then abruptly stopped speaking and pointed out a figure that had been spying on them from a nearby rooftop.

Sportsmaster immediately recognized the red-clad form of Red Arrow. With lightning-like speed, he raced off to attack. He was beaten to his prey by his younger, faster daughter, but ultimately dealt the decisive blow. With a one-two shot from a pair of explosive javelins, Sportsmaster drove Red Arrow off of the rooftop and into a nearby river. 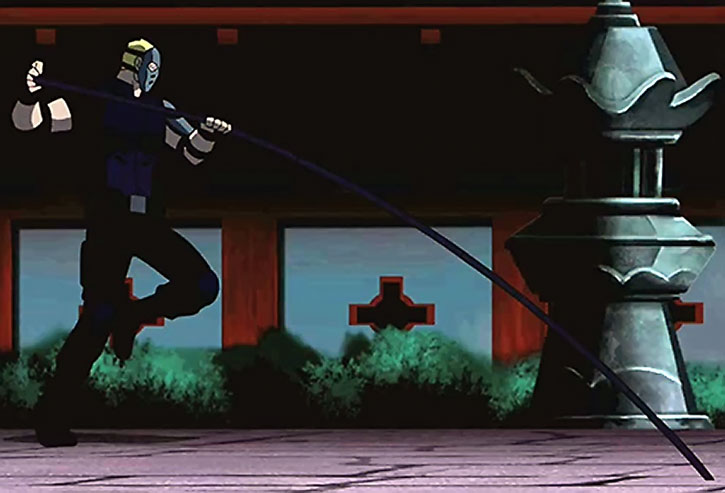 His final javelin followed Red Arrow into the drink, exploding with incredible force and leaving little to the imagination as to the fate of the young hero. Satisfied with his results, Sportsmaster returned to Ra’s to receive his next instructions.

At Ra’s command, the two returned to the peace talks. They once again attempted to assassinate Luthor and the leaders of Northern and Southern Taipei. All seemed to be going according to plan, until Red Arrow reappeared on the scene. He had survived Sportsmaster’s explosive attempt on his life, and to make matters worse he had back-up this time; Aqualad.

Despite this, Sportsmaster was prepared. He had a helicopter full of Shadows, all employed and trained by the League of Assassins, who lept to the attack. Sportsmaster himself waded into the battle, easily dispatched half a dozen guards before he came face to face with the young Atlantean.

The battle between the two raged fiercely while the chaos ensued about them. As it became clear that the youth would not simply fall before his strength, Sportsmaster congratulated him. Crock then revealed a tidbit of information to hopefully put him off his game. Sportsmaster had been watching “The Team” surreptitiously for some time via a mole that he had planted within it.

Despite his immediate surprise, Aqualad failed to lose his composure. He used his great power to create a massive eel-like apparition from the water that rained down from the sprinklers overhead. The apparition wreaked havoc amongst the Shadows, downing nearly all of the assassins in seconds.

When it became apparent that they were fighting a losing battle, both Sportsmaster and Cheshire fled the scene, avoiding capture by a narrow margin.

Neither of the pair have resurfaced since that time.

Sportsmaster is a large man, seemingly made up of rock-hard muscle. He is tall and broad, with short blond hair and cold brown eyes. These eyes, when combined with his slate gray mask, allow him to easily project an air of menace about him.

Sportsmaster’s costume/uniform is a simple one. His torso is covered by a tight black t-shirt which he covers with a midnight blue high collared vest. The collar itself, while open in the front, rises high in the back and covers most what would have been his exposed neck.

He also wears simple black elbow pads on both arms as well as a relatively common pair of fingerless black gloves. A set of interlocking, scalloped metallic plates covers the shoulder, bicep and forearm of his left arm.

His lower body is covered by a simple pair of black cargo pants and a pair of sturdy black boots. A thick black belt with a grey metallic belt buckle encircles his waist, and is used to store his personal weaponry.

The only piece of Sportsmasters ensemble that is truly memorable is his mask. It is a simple grey mask, which exposes only his eyes. The mask itself closely resembles a hockey goalie’s mask.

The Sportsmaster comes across as a veteran of the crime game. He is calm under pressure, and is unfazed by seemingly anything. He is confident to the point of arrogance, and it shows in his approach to dealing with problems.

Whether he is facing a Kryptonian, an Atlantean or a teenage boy, he deals with them in the exact same manner. He attacks, and attacks and attacks again until it is clear that he cannot win or it proves to be no longer advantageous to fight. At that point, he will quietly withdraw with a minimum of fuss.

“Thanks for the workout, but I gotta fly.”

(After freeing Cheshire from her prison cell)
Cheshire: “It had to be you !”
Sportsmaster: “Beggars can’t be choosers little girl. Coming ?”

Cheshire: “Because I’m a professional I won’t kill you, at least not while we’re on the job.”
Sportmaster: “You wouldn’t have this job if it wasn’t for me. Grow up already.”

The events of Young Justice are canonical and take place on Earth-16 within the DC Universe. Any travel through the DC Multiverse could potentially bring the player characters into contact with this version of Sportsmaster. 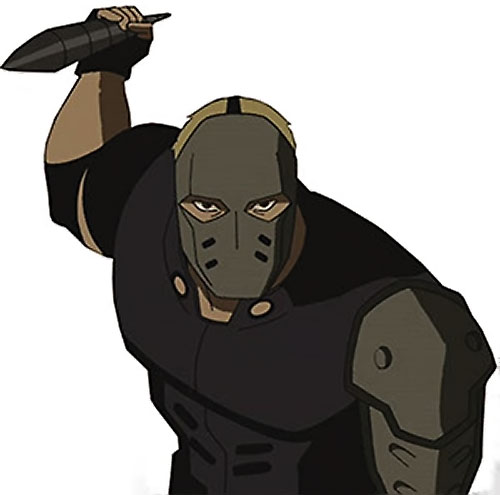 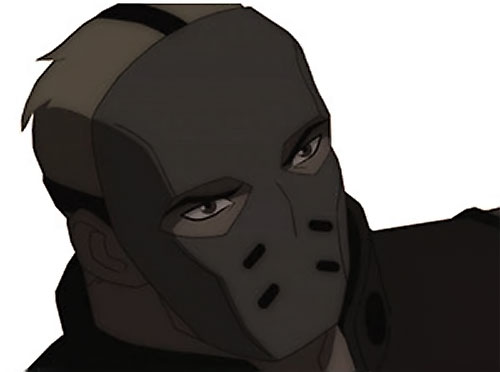 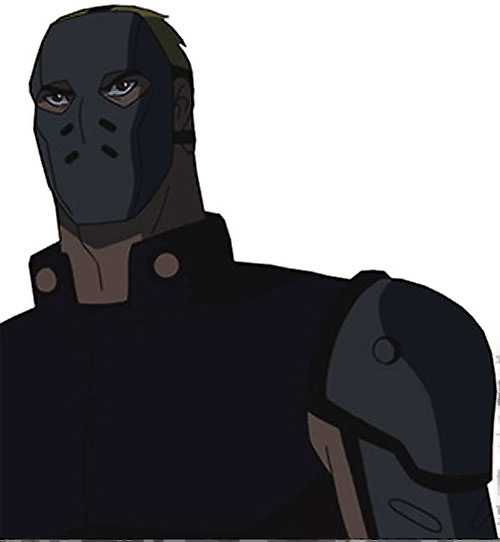 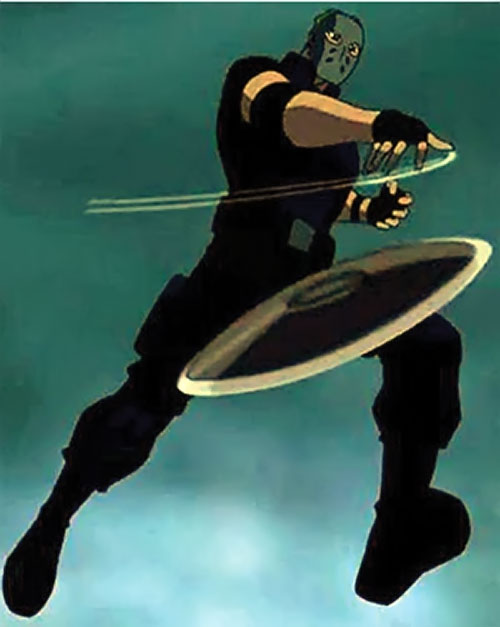