Spot has a very unusual power. His entire body is covered by multiple black spots, that he can pick up and throw around. He can leave them hanging in the air or put them on a wall. The spots are space warps to another dimension  called the Spot Dimension. They can be used for travelling from point to point on Earth-616 , using the Spot Dimension as a shortcut.

If he throws a handful of spots from his body into an area, he can attack out from any of those spots with his hands or feet. This will likely surprise any opponent in that area. If a spot is left in a distant area, he can travel to that area by using that spot as a space warp.

When he has many spots left on his body, he’s very hard to attack physically. This is because most attacks will hit a spot and thus pass on into the Spot Dimension. Since he carries a limited amount of spots on his body, he’ll be completely vulnerable to physical attacks if most of his spots are placed out.

Ohnn, in his civilian identity, is a doctor of physics and an accomplished scientist.

Dr. Jonathan Ohnn was a scientist working for Wilson Fisk alias the Kingpin. After several battles with both criminal elements and superheroes such as Spider-Man, Cloak and Dagger, the Kingpin was in need of a new super-powered henchman. Ohnn was responsible for analyzing the radiation frequency of Cloak and trying to duplicate his powers in the lab.

Working late one night, Ohnn managed to open a portal into Cloak’s Dimension of Darkness. The portal, however, drained the city’s power. This resulted in a major citywide blackout.

Desperate for results, Ohnn stepped into the portal, and passed out from shock. He woke up in another dimension of white filled with black spots. Ohnn managed to find the correct spot/portal back to the Earth-616 dimension. But upon reappearing there his entire body was white cowered with multiple black spots.

When Ohnn tried to brush the spots of his body, his hand sunk into one of the spots. He realised that the spots were space warps and that they might be used for defeating anyone in battle.

A spot of bother

Before telling Kingpin of his discovery, he decided to test his powers on super-powered opponents. After some time practicing his new abilities, he chose Kingpin’s opponents Spider-Man and the Black Cat as his opponents. When these arrived at Kingpin’s skyscraper he sent away the Black Cat several blocks via a spacewarp.

Spider-Man tried to attack Spot, but his hand sunk into the space warp’s on Spot’s body. Spot punched Spider-Man through hovering spacewarps that he’d thrown around the area. He then disappeared after announcing himself to be the victor. 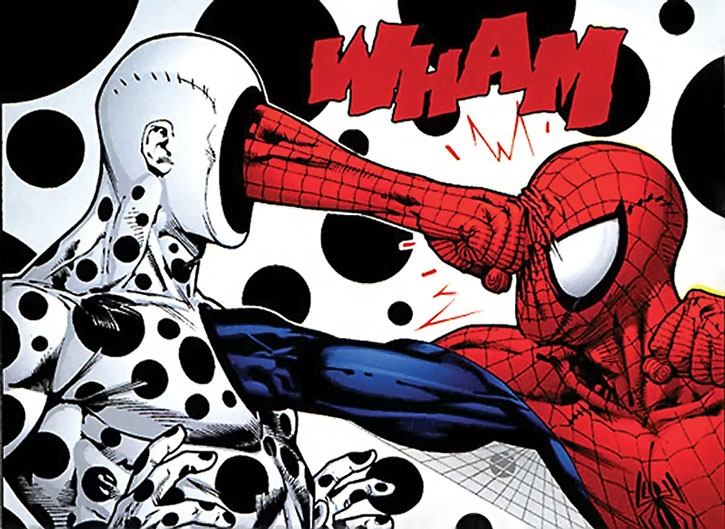 The next time they met Spot throw around lots of spacewarps from his body and attacked Spider-Man from every possible angle. Spider-Man, who realized how Spot’s powers worked, tricked him into throwing around almost all spots from his own body. Then, while Spot was almost fully white, Spider-Man attacked him physically hitting him.

Spot realized his error and tried to escape into the Spot Dimension, but Spider-Man followed him there through one of the spots he’d left behind. Spot, horribly terrified, was traumatized to believe that he wasn’t cut up to being a supervillain. He gave up and promised to quit his career as a supervillain.

He apparently held his promise, since he wasn’t seen for a long time, until he showed up along the group of misfit villains called ’the Legion of Losers’.

He remained an active member of this group alongside Grizzly, the Gibbon and the new Kangaroo, for some time, but the group has since become defunct.

Jonathan Ohnn in his human form looks very ordinary. He’s clad in a suit or a lab coat, wears a pair of glasses, and keeps a very low profile. His physical built is non-impressive and he moves quite slowly.

As Spot he is completely white with many black spots around his entire body and resembles something from a cartoon, so the appearance is characteristic, but not impressive.

Jonathan Ohnn is a secure, gloating villain… as long as he believes himself to be undefeatable. But when he is on the receiving end he quickly becomes scared and cowardly and will then very fast give up. In the vicinity of powerful individuals, such as the Kingpin, he keeps a very low profile.

Ohnn is an analytical scientist although his inexperience in physical combat and in the use of his powers can be used to defeat him.

Basically speaking, Ohnn is something of a nerd which makes him fitting in the ’Legion of Losers’.

“I suspect that these spots allow me to defeat anyone !”

Spot is a minor villain and could easily be inserted as he is. He would probably have been a scientist under STAR Labs, LexCorp or the military. His powers would have a tie-in with the dimension of Shade, the Changing Man, a Quantum effect like that responsible for Captain Atom and Major Force or the solar-energy studies responsible for Rampage.

Fitting opponents would be the likes of the Blue Beetle. 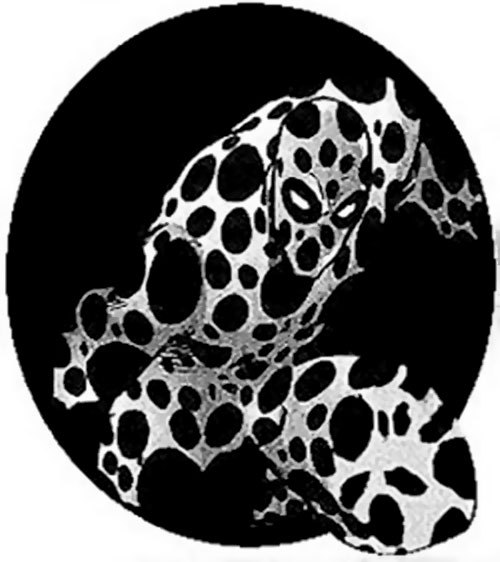 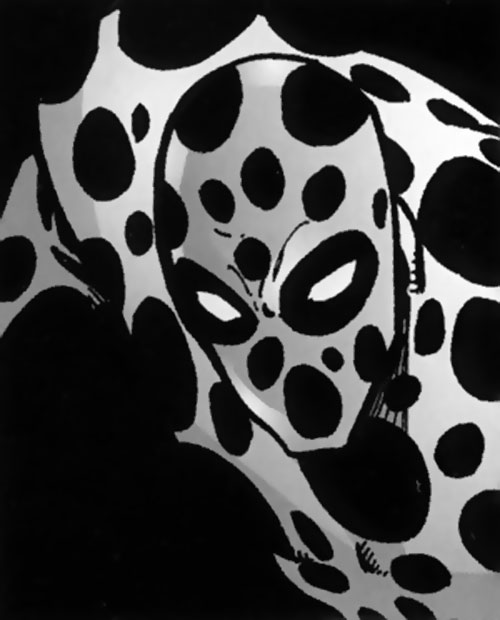