She first appeared in 1992, in Night Thrasher mini-series Four Control.

There’s no information on her occupation after the end of New Warriors vol 1. Feel free to make her support your player characters. Have her brag about her time with the New Warriors (“what a $#%@ing stud this Nova is!”).

Sprocket is a former military helicopter pilot. She received basic military training in fighting and tactical skills. She has excellent skills in mechanics and electronics. She’s able to fix an aircraft’s engine or avionics.

She has good perceptive skills.

Sprocket signed in the US Air Force and became a rotary wing pilot. After her tour of duty, she became a mercenary pilot. She took part in various conflicts around the world.

At some point, she served along with Andrew Chord.

In Rhodesia, in the 1980s, she had RnR with Donald Josh Clenendon, who later became Cardinal. On an evening of particular boredom, they had casual sex. He disappeared in the morning, leaving her with the bar tab and also… pregnant.

Not fit for motherhood

She gave birth to their daughter, named Valerie. Amelia was not of the motherly type, and she didn’t want to have anything to do with Clenendon. She never told him they had a child. She put her daughter in a military academy at six.

At 18, Valerie entered the Air Force to become a pilot, like her mother. Sprocket never saw her again. Valerie’s story is short and tragic.

After Dwayne Taylor discovered that Andrew Chord had killed his parents, he pushed him away. It left the New Warriors without a pilot, unable to go anywhere far from New York. Andrew pointed Taylor toward Sprocket.

So Sprocket became the New Warriors’ air chauffeur. She flew them around the world: Trans-Sabal, Rwanda, San Fransisco. She was so close to them they entrusted her with their secret identities.

Officially, she was employed by the Taylor Foundation. When Night Thrasher went solo, she was supposed to only fly him: West Coast, Madripoor, Sarajevo… But she also airlifted the New Warriors anyway.

She helped the New Warriors with their advanced equipments. When they discovered hidden levels in the Crash-Pad, she reached her limit identifying the hardware Hydra had left behind. Though the team didn’t actually know that it was Hydra, Sprocket made jokes about that possibility.

She was also very helpful when Dwayne and Andrew investigated Bandit’s claim to be Daryl Taylor’s illegitimate son.

Sky pirates over the Atlantic

During the Bosnian War (1992-1995) , Sprocket flew the Taylor Foundation’s board of directors to Sarajevo. They ferried some air traffic control equipment.

Cardinal and his Air Force team hijacked the jet. They had been hired to kidnap the board members. Sprocket recognized Cardinal and shot him. He punched her after Tanager nailed her with one of his daggers.

Night Thrasher hacked their armors’ electronics, paralyzing them. He blackmailed Cardinal, threatening to dump them in the Atlantic. He wanted them to use their advanced equipment to replace the cargo they had destroyed. Clenendon agreed. Somehow, he found a new, benevolent, motivation on this trip.

The next time Amelia and Donald see each other is during the Rwandan Civil War (1994) .

The TV news were showing Cardinal and the rest of Air Force doing humanitarian missions in Rwanda. The New Warriors were feeling bad that mercs were doing more than them. They asked Sprocket to fly them there with relief supply. She was easy to convince. The news had shown Air Force suffering heavy casualties by an unknown force. Amelia worried about Cardinal.

When she touched down, she rushed to check on him. He was severely injured by Undertow’s Soldiers of Misfortune and his armor was heavily damaged.

In the end, she flew the New Warriors back to the US with Kymaera missing.

The SHIELD had done DNA tests on Meteorite’s body to confirm her death. There was no doubt, now, about Clenendon’s paternity. Amelia went to the Seagate prison to tell Cardinal about the existence, and death, of their daughter.

We don’t know what she did when the New Warriors disbanded. No doubt she found some other private boss to hire her.

She always dresses in flight suits or military fatigues with a cap on top.

Sprocket has a bad attitude. She’s constantly swearing and cursing.

She acts like she’s the New Warriors drill sergeant, pretending not to care about them. But it’s an act. She likes them.

She’s a chain smoker, favoring cigars. She likes simple pleasures: drinking a beer with friends, having casual sex (with friends too), kicking some butts with guns.

Sprocket: “You drunk ? I am. Wanna make the bed squeak ?”
Clenendon: “Sure. Know what I like about being a merc’ Sprock ?”
Sprocket: “No strings attached.”
Clenendon: “You got it.”

“Haliday ! Get yer butt in gear, boy, or I’ll smack it upside of your thick skull !”

“What Chord is tryin’ t’be nice an’ say, kid, is… WILL YOU SHUT UP FOR HALF A MINUTE so we can have our head straight ?!!”

Helper(s): Darci, and various others for height/weight. 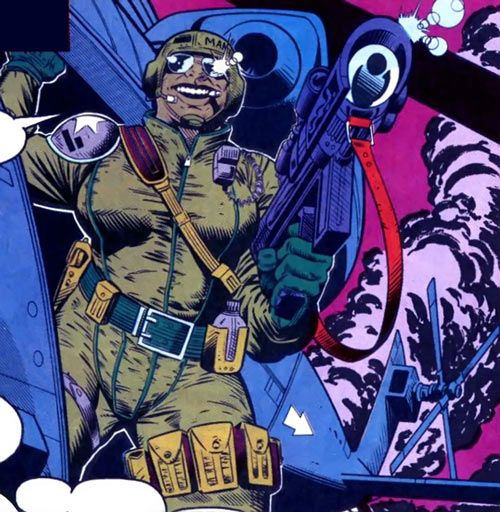 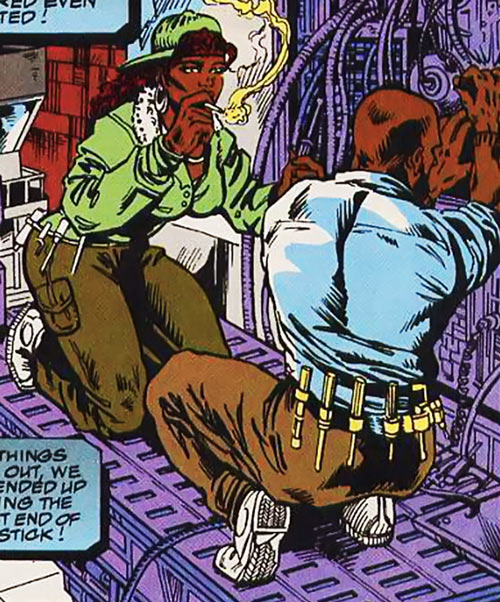 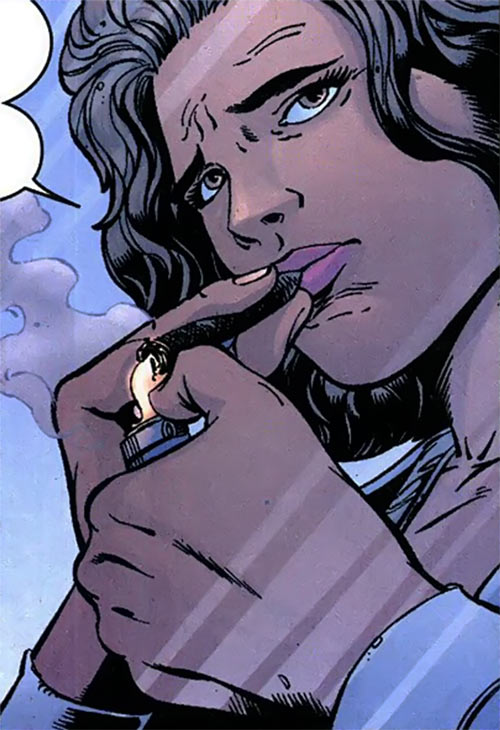