A skilled fighter and marksman, Katarina’s main weapon is her political authority. She commands the resources of the American (and allied countries) intelligence community to get what information and resources she needs.

A college rival of Oracle (Barbara Gordon), Katarina forced herself to excel in everything. She developed a competitive friendship with Gordon. The only thing Barbara could definitely beat her at was running.

At one track meet, Katarina tripped Barbara, allowing her to win. Then she immediately went to admit it to the judges, all of which she’d planned beforehand. This ended any chance at friendship between the pair.

Incredible how you can…

She became a high-ranking member of the intelligence community, adopting the name Spy Smasher. She battled terrorism around the world, always keeping an eye on Gordon’s activities.

While most of her service is highly classified, there are rumours of numerous abuses of power. This range from kidnapping to attempted assassinations of foreign heads of state. There are also mentions of a mission in Afghanistan that ended badly.

Deciding to take over the Birds of Prey, Katarina sabotaged one of their missions. She blackmailed Oracle, threatening to have her father’s career and health ruined. Barbara reluctantly let Katarina take control.

Katarina led the Birds on a rescue mission to Russia. There they came into conflict with the Secret Six, and Spy Smasher fought Deadshot to a draw. Katarina managed to alienate most of her team mates. Lady Blackhawk even punched her and stormed off to find her own way home.

… see right through me

Returning to Metropolis, she agreed to meet with Oracle. Manhunter (Kate Spencer) shot Armstrong in the leg, leaving her more level with Oracle, who challenged her to a fight for control of the Birds. Enraged, Katarina attacked, and was beaten by Oracle.

She was then confronted by all of Oracle’s current and former operatives, led by Black Canary, who warned her off. She grudgingly left.

It later appeared that she’d overstepped her authority in the action. Sasha Bordeaux, Black Queen of Checkmate mentioned her Knight, Joséphine Tautin “drop-kicked her down a deep, dark hole”, and Sasha apologized to Oracle.

Fanatically devoted to protecting America from terrorists, Katarina accepts nothing less than complete obedience to her commands. She sees anything less as being akin to treason. Intensely competitive, Katarina has to prove herself better than everyone else. She is arrogantly superior to everyone around her.

Her mistrust of others leaves her often manipulating them to do what she wants. Yet she has a fairly direct approach to problems, and can be easily goaded into reacting. She’ll use blackmail, threats of force, or whatever methods she must to get what she wants. She sees it as being for the good of her country.

“Just so we’re clear here. They call me the Spy Smasher. Because I kill terrorists, and those who wish harm against our country. You will never, ever be in the room with anyone of a higher authority — not even if you live to be a hundred. In certain matters, I outrank even the President.”

“I could have your dog in Gitmo for international terrorism with just a phone call. I don’t have time for the carrot, Wilkins. Don’t make me use the stick.”

“Not desperate, Gordon. Determined. To go all the way, to do whatever it takes. That’s what a patriot is.”

“I’m not a monster. I have feelings. I just love my country. And my country needs me.” 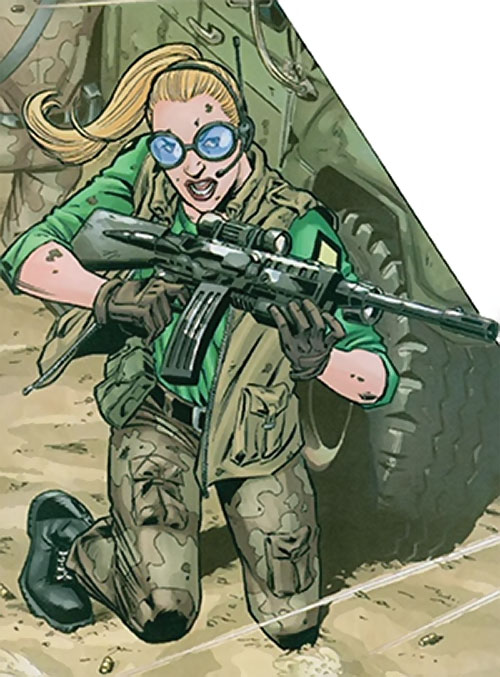