The bulk of his material was in 1988, during Weezie Simonson’s New Mutants run.

He also had a TSR Gamer’s Handbook to the Marvel Universe entry. But I guess that it only matters to older SHTTRPG enthusiasts.

Spyder is handy for space adventures that aren’t the Adam Warlock or Silver Surfer cosmic fare.

The concept is simple – a combination Jabba the Hutt and tricky, conniving dragon. And the focus never really was on him, so there’s room to develop and refine the character.

Spyder is large and has six limbs, allowing him to deploy superhuman strength. His pinkies seem about as opposable as his thumbs.

Spyder has huge amounts of space money, allowing him to hire space mercenaries. He goes more for value than quality when it comes to these enforcers, but these also have space business law training. They call themselves “accountants”. 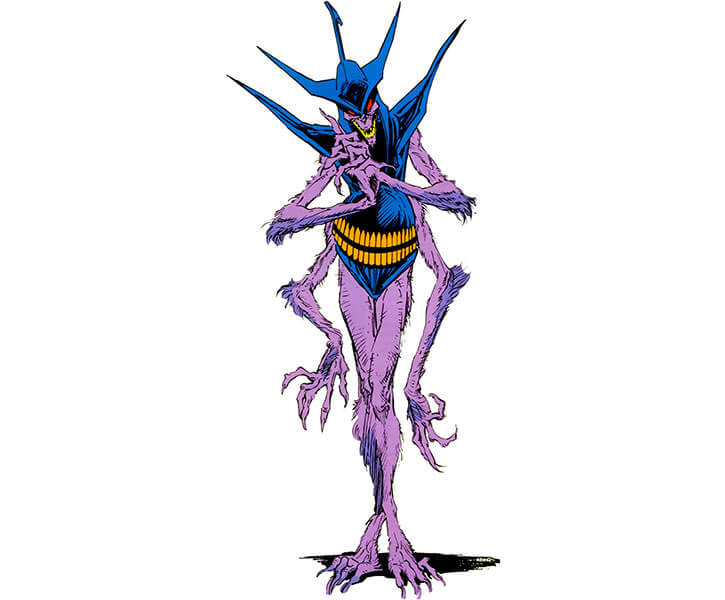 However, there exists a method to extract these from other people, then distil them as vapour. Huffing it will make even Spyder experience that feeling.

Spyder is addicted to this. He’s always cracking open and breathing in new capsules. The feelings he experiences can lead to suboptimal decisions, but being a junkie he’ll defend these choices using flimsy rationales.

The process to extract emotions is normally fatal. It may be some sort of alchemical thing.

Spyder’s one emotion — greed — *can* overwhelm him. Frex, he might panic if he’s about to lose a huge sum. But he can counter that by huffing an appropriate emotion, such as a feeling of calm or stoicism.

Spyder was based on an unnamed planet, which seemed to be a commercial hub. It isn’t his homeworld, or a population planet for his species.

He seemed to have two main bases :

This planet seemed squalid and unpleasant, with Spyder probably owning much of its total wealth. That made him the highest authority there, as a sort of robber baron.

Criminal activity appears to be rampant, with numerous small street gangs of disparateMade up of things unlike each other. aliens. 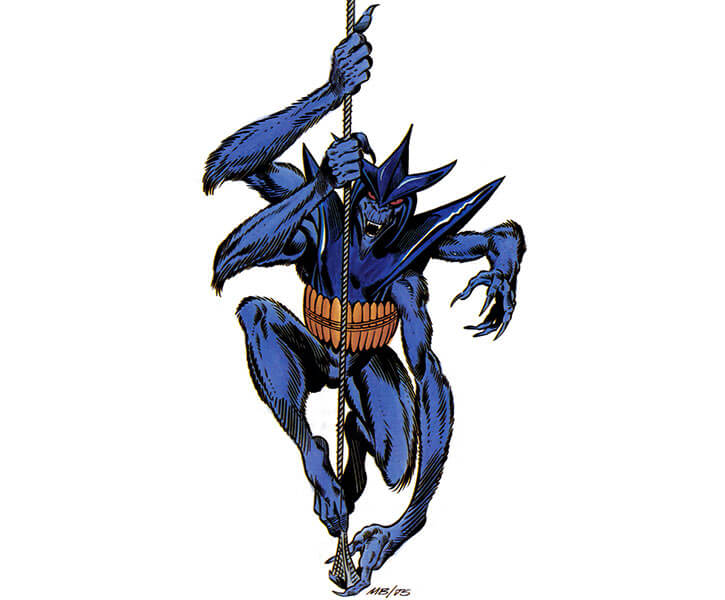 Spyder often rides a floating pod. It has force shields, and these can be shut down to direct more energy toward the thrusters – to fly away.

The orbital station can launch assault shuttles. These :

Everybody could understand everyone. So there might be “translator field” technological thingies across the station and the cities on this planet. And in Spyder’s bases and ships.

Spyder uses an arsenal of technological restraints, power dampeners and cages. These are very efficient. But they must be built to neutralise the abilities of specific — and well-studied — persons.

Spyder seems to overestimate the power of his hardware and helpers. It could only delay the 1988 roster of the New Mutants, and not by much. This suggests that Spyder normally preys on parties who can’t really defend themselves.

The main exceptions were the character(s)-specific cages and restraints. These worked great.

Workin’ for the Man

As a helper for the “warden” (see below), Spyder carried a little box. Opening it shot a black, oily substance. This thing may have been akin to symbiotes such as Venom or Carnage.

This thing struck so fast and accurately that it seemed impossible to dodge. It would unerringly engulf the target’s head. From there, Spyder could order it to crush the skull, or to let the victim suffocate. One button also drew the thing back into the box.

The box also controlled the mighty power dampeners within the prison.

What says 1988 best to y’all ? Why, just click on this mysterious, innocuous link that you innocently expect to take you to your favourite song of that year and you’ll know !

DO NOT LOOK AT THE PREVIEW IMAGE DANGIT.

Spyder is an alien space trader, in space. He runs an intergalactic network called the Webb.

Officially, the Webb is a manufacturing company. In actuality, it keeps entrapping would-be partners through subterfuges, legal tricks and abusive contracts. It’s closer to a mob.

Among Spyder’s victims are :

Spyder’s core plan was to force Gossamyr’s family to become adults. Normally, this species strives to forever remain childlike. For when they grow up, they become ravenous monstrosities capable of devastating an entire solar system.

Spyder knew that this metamorphosis took place in a cocoon. And the fibre making these up was invaluable. Running away with the discarded cocoons would result in a staggering fortune.

Spyder intended to have his guards shoot the monsters when they’d leave their cocoons, and were therefore still weak. But most of his efforts were about being able to flee with the cocoons.

Most of his valuables had been secreted away, and he didn’t care in the least about the solar system where the operation would take place.

So you wanna be a rock’n’roll star

Spyder also “repossessed” Lila Cheney while she was performing on Earth. A galactic-scale teleporter, Cheney was the perfect getaway vehicle.

Spyder knew that the New Mutants would come to her rescue. He therefore sent Gossamyr to mess with them.

This mostly worked, but the New Mutants nevertheless came in just as the giant monsters emerged from their cocoons. Gossamyr then betrayed Spyder.

With Lila taken away from him, Spyder was forced to flee on his own, and without the discarded cocoons.

Spyder remained in comic book limboWhen a character still exists, but hasn’t appeared in comics for years for 30 years.

When seen again, he was working at a secret Inhuman space prison. This hidden oubliette existed to dispose of grave threats.

However, it had gone off the rails. One prisoner, who could absorb the power of others, grew immensely powerful in this galactic gulag. He took over the prison, and started to offer its services in secret.

Powerful beings were sent there by police forces from various planets, for the “warden” to feed on.

Spyder worked as the warden’s sole known helper. He ran most everything, from relations with customers to handling the most dangerous and wilful prisoners.

However, he too was a prisoner. Inmate “Blinky” stated that Spyder’s exact status was hard to explain. Thanks, Blinky. That was helpful.

Spyder said that he was receiving “privileges” in exchange for his services.

During their escape attempts, they twice bushwhacked Spyder.

The prison was eventually destroyed. Though Spyder was badly blasted by Black Bolt for having hurt his dog Lockjaw, he was still alive and may have escaped. 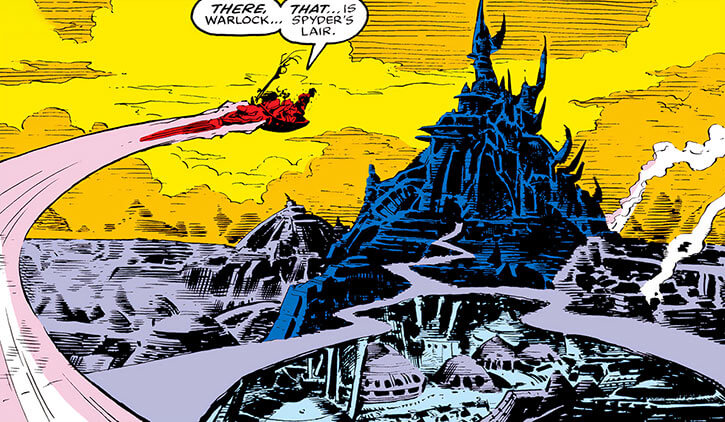 In 2017, Spyder spoke with hissing sibilants. This may be because he was now using a different translation tech.

A bully, he relishes in lording over his slaves and calling them “it”. He also enjoys explaining how his horrible behaviour is fully legal, and “justified” by the logic of contracts and business interests.

When Spyder is computing probabilities, he sounds a bit like the Mad Thinker. Especially when he announces percentages of success.

Spyder loved working with Gossamyr. The lass’ ability to manipulate passions didn’t affect him directly, but watching her work fed into his addiction to watching or experiencing emotions.

As a prison kapo, he usually addressed prisoners as “meat”. 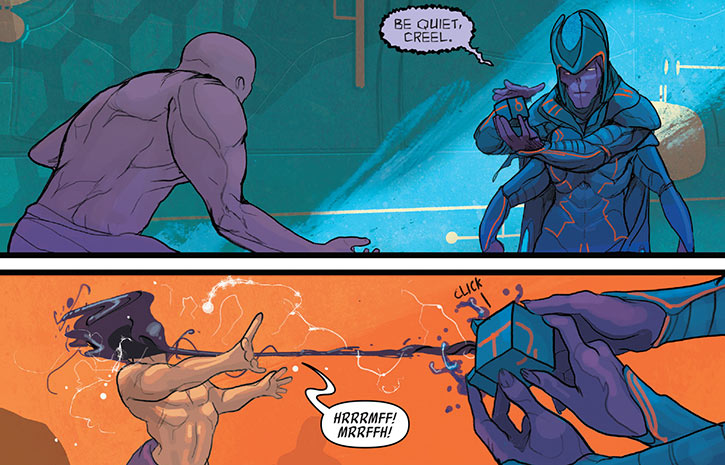 “I forced Lila’s owner into bankruptcy. Your clan forfeited itself. You are both merchandise. A contract is a contract. […] Since those bankrupt fools list Lila as missing, have I not the right, nay, the financial *obligation*… to recoup my loss ?”

Gossamyr: “She didn’t [sell herself into bondage].”
Spyder: “Its world sold it. Legally, it’s the same. I have acquired it… through accepted business practice. I have its *contract*.”

“Welcome to my parlor.”

He likely would have clashed with the Justice League during the 1990s, back when they were in charge of a bunch of alien refugees.

There are commonalities between Spyder and Larfleeze – the Orange Lantern. But Larfleeze is probably the more engaging character.

Detective (Law) only applies to the dominant form of corporate law in the galaxy.

May have Strange Appearance on some planets. Spyder’s species doesn’t seem to be a common one.

The one with the restraints for Ms. Cheney might have had DEX 04. Maybe.

A half-dozen of those guarding his castle’s core had large power armourStrength-enhancing body armour, like Iron Man’s. We don’t see much of it, but it clearly was less powerful than Suspot (Roberto da Costa) or even the Darkchilde.

The creature within the box seemed to have DEX 12 STR 08 BODY 07, Enhanced Initiative: 30 and Fluid form: 07. DEX could easily be even higher.

The energy pistol could wound Lockjaw, so maybe Energy blast: 07.

Not enough data for the rest.

Spyder’s stats are largely arbitrary for lack of material.

I’m assuming no poison and no web secretion, since the “evidence” is way too thin.

The proportional wealth of a spider

There isn’t much material about Spyder – so the stats are a bit sparse. I’ve also stuck to lower-bound estimates.

If you want to use him, our contributor Nicolas’ suggested additions are :