There were several generations of Knight and Squire. Beryl Hutchinson is the modern one. She first appeared in 1999, but the bulk of her appearances came during the second half of the 2000s and later as Morrison’s Spyral and Batman, Inc. plots deployed.

A trained fighter, Beryl is alleged to have communication powers. She’s skilled in all forms of communications, from electronic or exotic communication technology to the spoken language or telling when someone is putting on an accent.

She’s often armed with a slingshot, rides around on a motorcycle (which if it matches Knight’s can track by scent), and has used miniature remote controlled spitfires to reconnoitre.

While Beryl supposedly has communication powers, there’s little direct evidence of their use. All one can observe is her being highly intuitive with regards to communications. This applies to speech, body language, and communication systems.

In DC Heroes terms, her high Intelligence and her Scholar (which applies to all kinds of communications) should cover most stuff.

The most impressive display of her powers was probably interfacing with the infant universe of Qwewq. But that was vague, and defining it as an Intelligence check for her to understand how to use the interface for communications should work.

Growing up in Greater Worden, Beryl lived with her mother. She spent a lot of time in the library, quickly absorbing all kinds of information and developing an aptitude for communications. 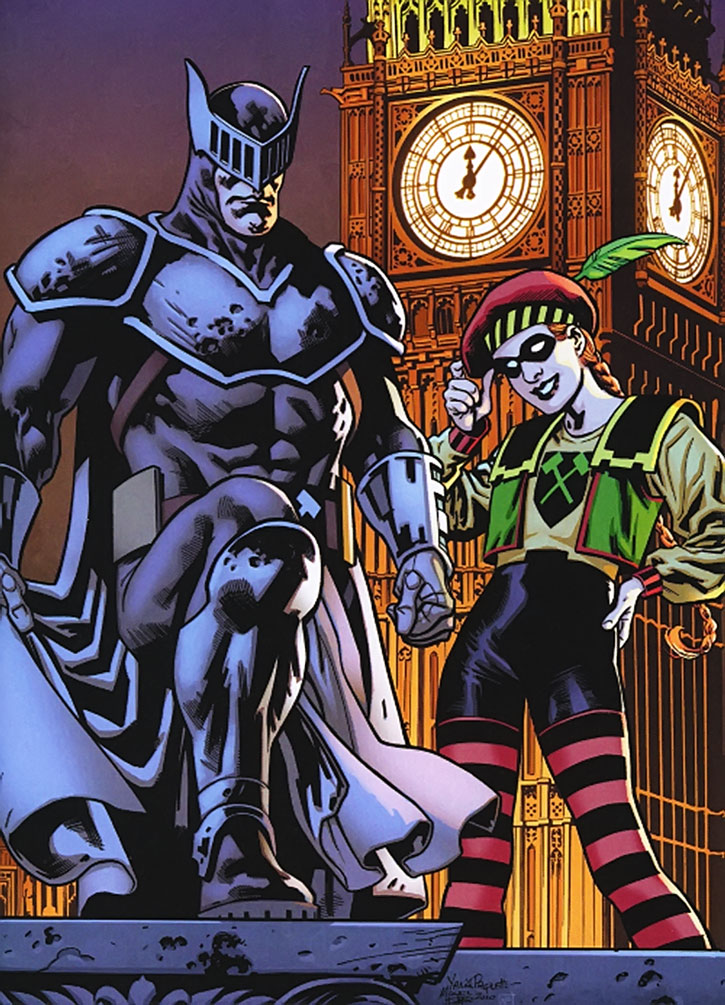 Greater Worden was home to the superhero Knight, whose identity as Earl of Wordenshire was an open secret. When Cyril Sheldrake took over the Knight role after his father’s murder, he didn’t handle it well.

Sheldrake hit rock bottom, drunk and homeless on the streets of Greater Worden. Beryl’s mother sent her over to ask if he needed help. But Beryl instead berated him for his behaviour.

Beryl’s mother let him stay in the spare room as he pulled himself together, and he became a big brother to Beryl. Recognising her abilities, Cyril let her become the new Squire – the role he’d had to his father’s Knight.

Staying ahead of Grodd’s gorillas long enough for Batman to rescue her, Squire was slightly overwhelmed by him. This wasn’t helped by them immediately boom tubing to Pluto. 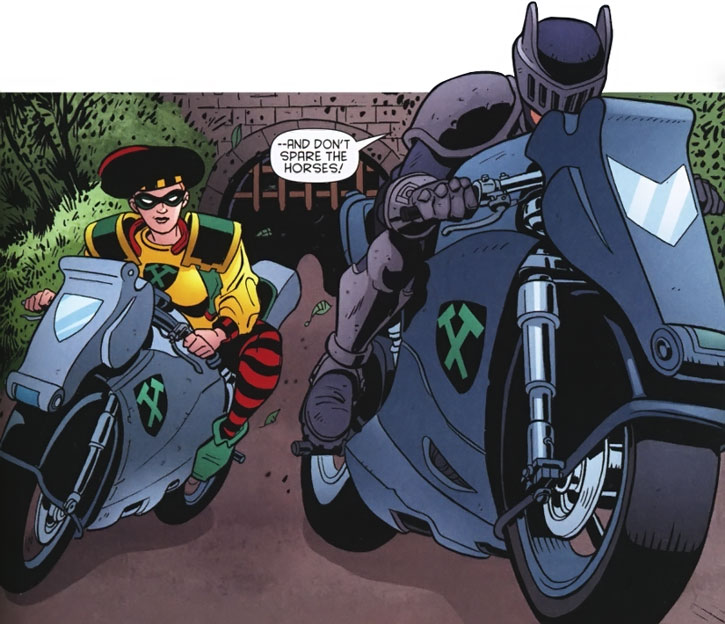 When he showed her the baby universe the rest of the JLA had gone into her anxieties fell aside. She worked out how to interface with it and use it to communicate with the team.

Batman trusted her to get on with it while he returned to Earth to delay Grodd. Beryl soon got the JLA back, in time for them to intervene and save the Ultramarines.

Meeting newcomer Shrike (Dennis Ennis) in the Time in a Bottle, Squire helped him decide to be a hero rather than a villain. The two kept in contact, and made vague moves towards dating.

It came to an abrupt end when Shrike interrupted Jarvis Poker’s crime spree at the moment the real Joker found him. The Joker shot Shrike in the head, killing him.

Beryl managed to keep it together enough following Dennis’ death to work out how to trap the Joker. The madman was sent back to Arkham.

Cheerful and sociable, Beryl’s communication abilities allow her to put people at their ease if she’s so inclined. Which she usually is.

While having no trouble leaping into danger, and enjoying the thrill, she realises her limitations. Beryl will call for help if necessary, using her abilities where they’re best suited.

She sees half her job as keeping an eye on Cyril, her presence giving him a reason not to go off the rails again.

“Mini-spitfires are on their merry way to get a closer look at the enemy. He’s a biggun, ey ? Give us half a mo’, we’ll have him matched up in the villain database, Cyril.”

[Interfacing with a baby universe] “There’s a ton of moving parts which can put yer right off… but ’universe‘ means it’s all one thing really. Radio, micro-waves, heat, light… that’s how stars communicate with one another.” 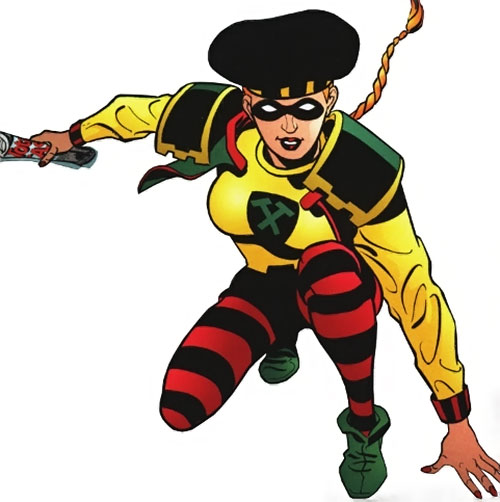 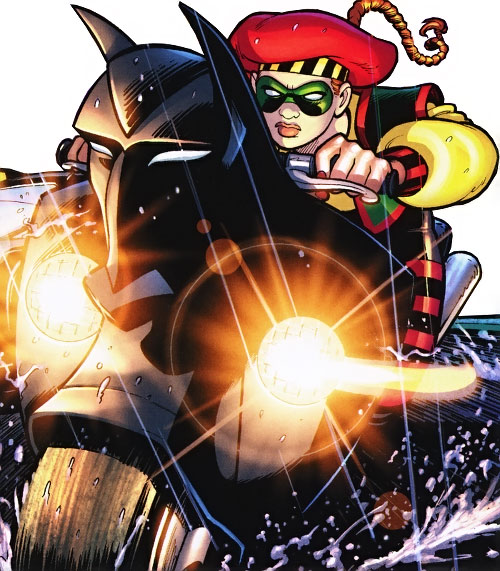 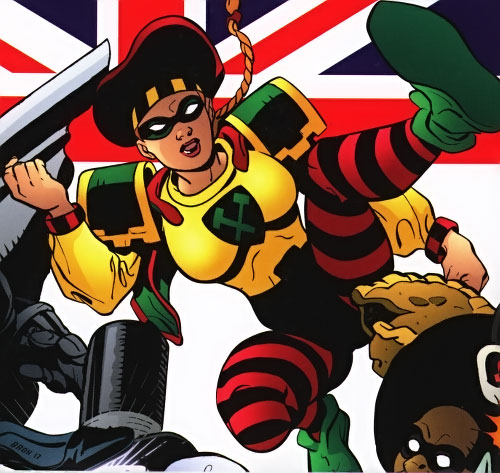 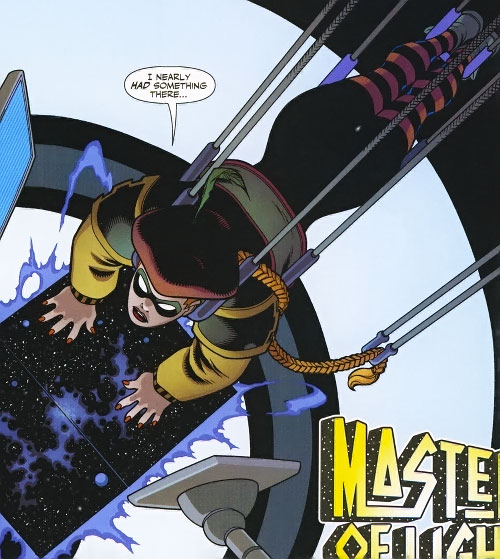 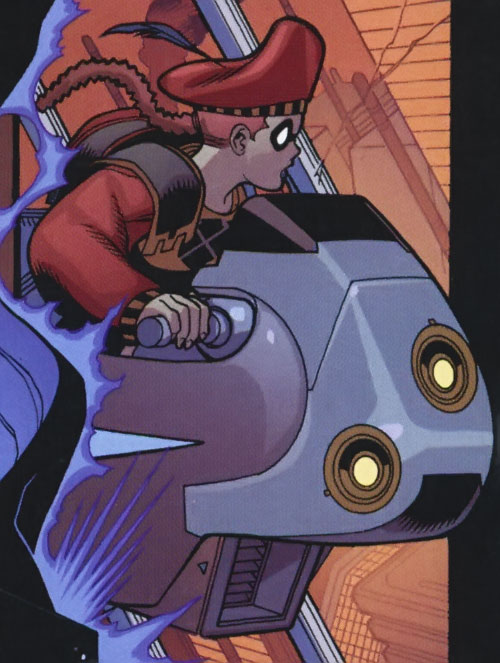