Squirrel Detective is, well, a squirrel. A highly intelligent squirrel. He has the usual squirrel abilities like claws, jumping and eating nuts. He can also talk to any animal species. And he can telepathically communicate with humans and other intelligent species.

He can also solve mysteries. Really well. He’s especially useful on cases where his small size and stealth enable him to gather clues and listen in on conversations that would be inaccessible to a human detective. But really, any detective in the department would be lucky to have him as a partner.

A few years ago, in a park in Brooklyn, an unusual squirrel was born. He was kicked out of the nest somewhat earlier than usual, but managed to survive due to his exceptional intellect.

After helping a bewildered NYPD detective with a case, and convincing him he wasn’t crazy, he managed to get a consulting gig with the department. Now he helps out with cases that are particularly tough nuts to crack.

He’s a macho, street-smart guy… er, squirrel… with a Brooklyn accent. He’s very much a down-to-earth squirrel of the people.

Sometimes he gets a little spooked and acts nutty when those ****in’ birds come around, ya know?

“Pieczkowski, will you get your nuts off my nuts ? Seriously, I do not need your cheeks all over something I plan to put in my cheeks. That’s my lunch you’re sitting on, there, ****face !”

He would probably operate out of Metropolis instead of NYC. He might be acquainted with Detective Chimp. 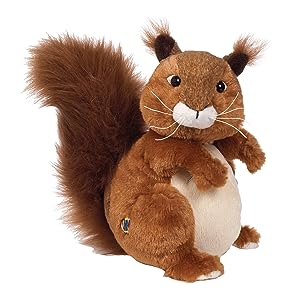 Squirrel plushies and other decorative nonsense