She has small claws on each finger, which help her climb, enlarged incisors, and a retractable knuckle spike, which can carve through wood.

She can also communicate with, and summon squirrels, which happily follow her commands.

She has one particular squirrel as a permanent companion. Originally this companion was Monkey Joe, but soon after he was brutally slain by Leather Boy, she adopted Tippy Toe, the sole surviving squirrel of the team’s final battle with Maelstrom.

Both of these squirrels are highly intelligent, able to understand and use human equipment (such as when Monkey Joe searched the internet for information vital to a case), and can work without orders from Squirrel Girl.

Her belt pouches, or nutsacks, hold a collection of nuts, such as macadamias, peanuts, cashews, almonds, and acorns. For her first Christmas with the GLX, she had Big Bertha as a secret santa, and received a lightweight, single-occupant helicopter, the Squirrel-a-gig.

Squirrel Girl has a peculiar ability to beat even the greatest cosmic menaces, even if that makes no sense whatsoever and is clearly impossible. She has done so repeatedly. Our game stats assume that this is a unique form of unconscious probability on her part. As far as she’s concerned, it’s just the result of having a positive attitude.

Doreen’s mutant abilities manifested early in her teens. Even hiding her tail she still earned the nickname ’rodent‘ at school. She escaped their taunts in the woodlands, where she befriended the squirrels, forming a particular bond with one she named Monkey Joe. 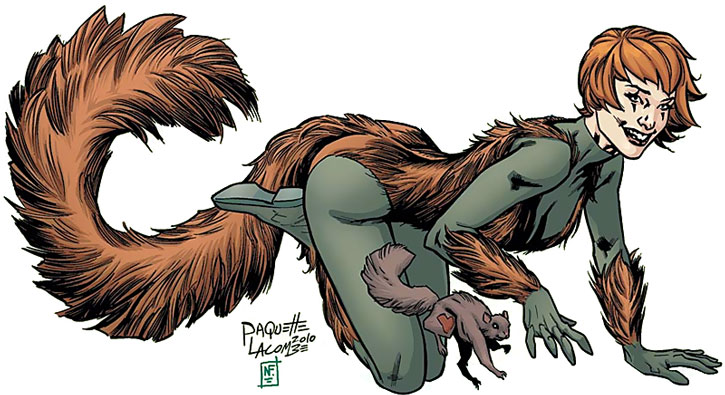 Becoming a superhero, she took the name Squirrel Girl. She decided to approach her idol, Iron Man, who was based nearby at the time. Noticing an armoured individual lurking near the Stark Enterprises site, she set about him unaware she was attacking Dr. Doom.

Finding Iron Man testing new equipment in nearby woods, she showed off her abilities and asked to become his sidekick. He was politely declining when they were attacked by an enraged Dr. Doom. The Latverian quickly captured and imprisoned them on his Doomship.

While Iron Man was securely bound, Doom didn’t view Squirrel Girl as a threat so left her locked in the room with Iron Man but otherwise free.

She found a vent and – before Doom could take the Doomship out of the woods – summoned an army of squirrels to storm the Doomship, forcing it down. Doom was unable to withstand the swarm as they shredded his armour, and was forced to flee.

Iron Man convinced her to return to school, promising that if she still wanted to be a superhero after finishing college he’d put in a word for her with the Avengers.

After college she moved to New York, where she started fighting crime in Central Park. One night she stopped a pair of muggers only to discover their intended targets were Doorman and Flatman of the Great Lakes Avengers, who were in town looking for new recruits. She accepted their offer of membership.

Squirrel Girl travelled to Milwaukee with them and met her new teammates. While they were following leads on the villain Maelstrom, Squirrel Girl insisted on that Monkey Joe was perfectly capable of performing monitor duty and should be considered an equal member of the team. They acceded to her wishes.

They returned from the mission to find Monkey Joe had been murdered by Leather Boy, an embittered former member of the team. Squirrel Girl was devastated.

When the team finally went up against Maelstrom, Squirrel Girl led an army of squirrels against Batroc’s Brigade. The singularity created by Maelstrom’s device sucked in all but one of the squirrels. Following Maelstrom’s defeat, Squirrel Girl formed a bond with the surviving squirrel, naming her Tippy Toe and taking her on as her sidekick.

Alone and with the rest of the team, Squirrel Girl soon dealt with such threats as the Mandarin and Giganto. Celebrating her first Christmas in Milwaukee, Squirrel Girl happened across a battle between agents of S.H.I.E.L.D. – led by Dum-Dum Dugan – and AIM – led by MODOK. Dugan asked for her help and she and Tippy Toe soon managed to subdue MODOK.

Dugan offered her a job with S.H.I.E.L.D., but Squirrel Girl declined, saying she was happy where she was. 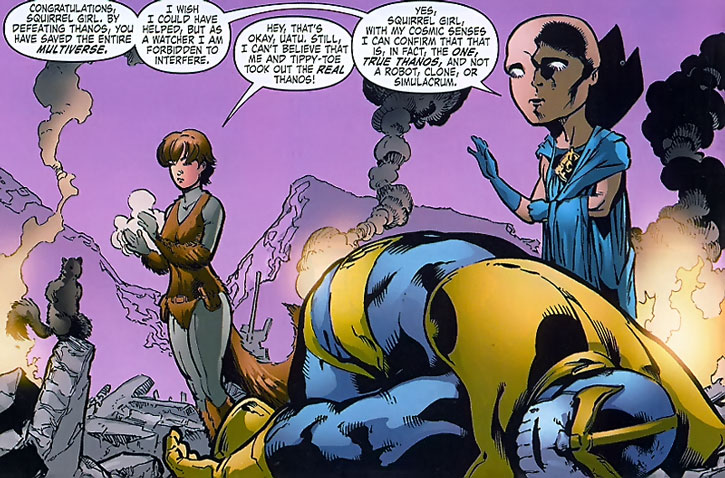 Returning to the GLX HQ with the eggnog, she realised she’d forgotten the toilet paper so had to set out again. This time, she happened across Thanos’ (the real one, not a robot, clone or simulacrum) arrival on Earth and managed to subdue him, turning him over the S.H.I.E.L.D..

After returning with the toilet paper, she was contacted by Dugan and asked for help battling Terrax. She happily agreed, and sped off to battle.

Developing a crush on Speedball she met him at one of his public appearances where she prevented the Bug-Eyed Voice from disrupting proceedings. The grateful Speedball rewarded her with her first kiss.

Visiting squirrel friends in Central Park, Squirrel Girl and Tippy Toe teamed with the Thing to beat the Bi-Beast. The Thing was so impressed that he invited her to his super-hero poker tournament.

Escorting Dionysus back to Olympus after the GLI rescued him from AIM, Squirrel Girl helped Zeus out thwarting Pluto’s latest scheme.

Doreen learned what had happened to Speedball in the wake of the Stanford incident. She snuck into Thunderbolt mountain to try and talk him out of his Penance identity. Too mentally unstable for her to help, Doreen reluctantly left him there, but didn’t give up on him.

Travelling to Latveria, she accessed Dr. Doom’s time machine. Doom acted indifferent to her presence, probably not wanting to be beaten by her twice. Squirrel Girl travelled to a divergent future where an earlier version of Speedball had ended up.

Due to the vague laws of time travel he couldn’t return to his home time, and Doreen briefly considered staying with him. A visit from that time’s Mr. Immortal got her to return home.

Deciding the team were coming to rely too much on her, and so not developing on their own, Squirrel Girl left them and returned to New York. Luke and Jessica Cage were looking for a super-powered nanny for their daughter – Danielle – at the time, and Doreen applied. As the best applicant (and least scary or erratic) Squirrel Girl got the job. 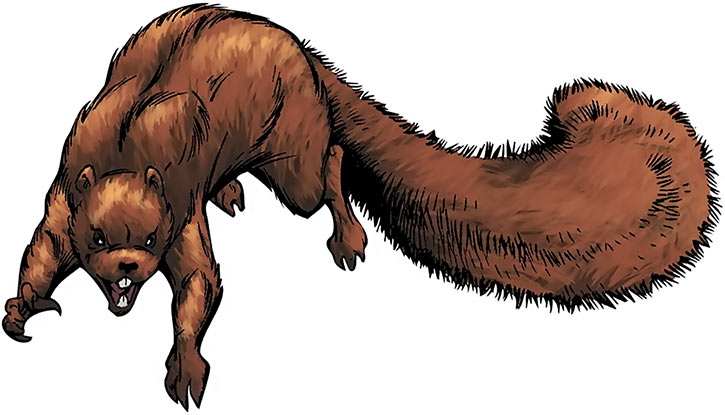 She was unaware Wolverine was part of the team, but seems to have some kind of history with him (calling him James). They’d apparently sworn to avoid each other, and there’s tension between them.

While she’d initially had hopes of getting noticed by the Avengers, she quickly grew to love her job and Danielle.

Cheerful and eternally optimistic, it’s difficult to suppress her enthusiasm for being a super hero. Squirrel Girl is somewhat naïve about some matters, and is resolutely immune to double entendres.

She cares greatly for squirrels, and is extremely close to her sidekick squirrels. She defends them from any accusations that they are not a full member of the team. 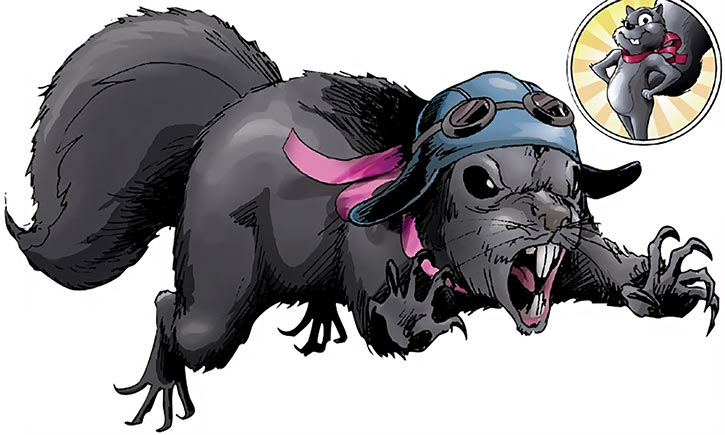 MODOK: (On being unable to hit her) “Impossible !”
Squirrel Girl: “Mister, I don’t know the meaning of the word ! Well, actually I do. It’s not like I’m stupid or anything. I just don’t choose to use it in my personal lexicon. It’s very disempowering.”

She spent some time with Titans West, but left when she felt Gar was mocking squirrels.

Bonuses and Limitations:
Shrinking is always on and is already factored in (-1).

Squirrel Girl usually has one squirrel with whom she develops a strong bond. Initially this was Monkey Joe, who had been with her for years, but after his death she developed a bond with Tippy Toe.

They seem smarter than normal squirrels — which may be in part due to the bond — and in more humorous Genres they can function as Sidekicks rather than Pets.

Bonuses and Limitations:
Shrinking is always on and is already factored in (-1).

Probability Manipulation is there to explain her ability to beat a couple of cosmic opponents in a run. It is something she only uses against serious opposition. 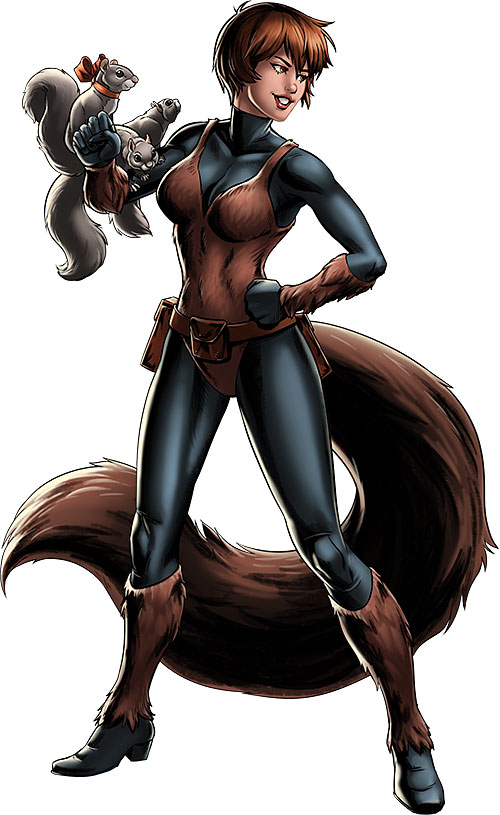 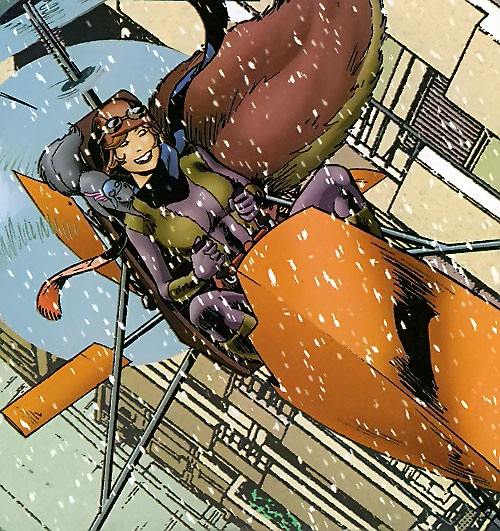 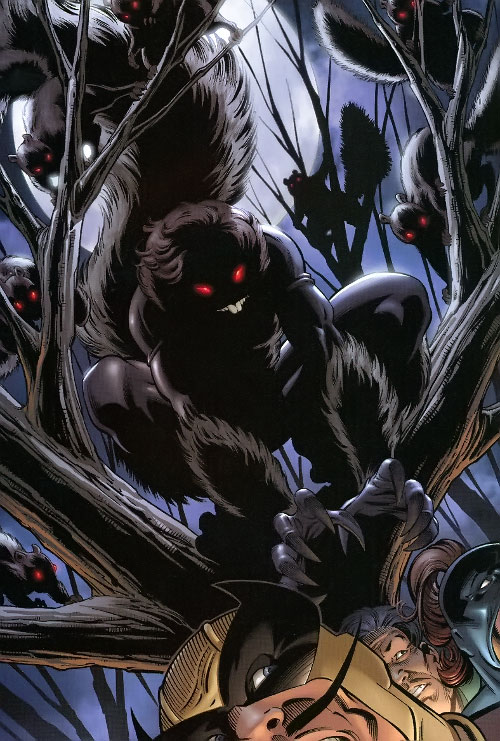 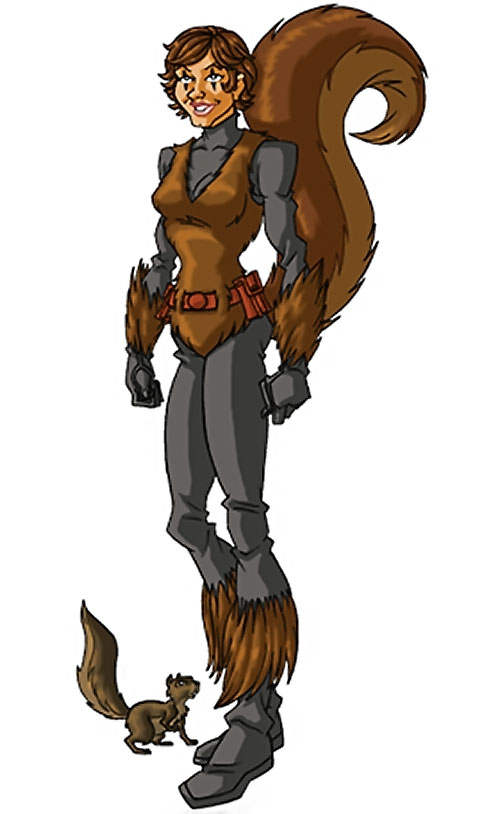 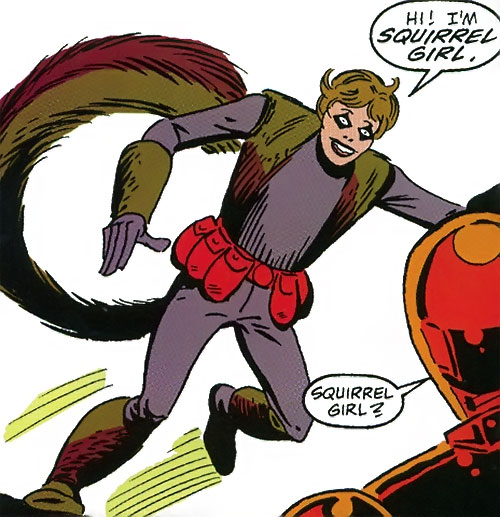