G.I. Joe’s story focused on the ongoing struggle between the G.I. Joe Team (a group made up of soldiers hand-picked from the four main branches of the U.S. Armed Forces) and the sinister Cobra organization (who were dedicated to world conquest).

Our write-ups specifically cover the first 56 issues of the 1982-1994 Marvel comics series which took place in it’s own universe (and thus exclude any events found in any other comics (IDW, Image, etc.) or television/movie series.

Stalker (who was loosely based on a real-life soldier that Larry Hama met in ‘Nam) was the first field leader of the G.I. Joe strikeforce. He led most of the missions and oozed a coolness and confidence unmatched by any of the others.

Like most members of the G.I. Joe strikeforce, Stalker is an exceptional soldier.  He has received extensive training in Advanced Infantry, Intelligence and Languages (he is fluent in Arabic, French, Spanish and Swahili). He used his training to great effect in the Vietnam War and continued to take part in numerous clandestine military operations once the war had concluded.

In the process (and during his tenure on the G.I. Joe team), he gained extensive experience in:

Stalker is a qualified expert in a wide assortment of weapons from the M-14 to the (fictional) M-32 “Pulverizer” Sub-Machine gun. While Stalker is only a fair hand to hand combatant, he is still an above average athlete and an exceptional marksman.

Stalker constantly employs a small arsenal of weaponry. He is normally armed with at least one assault rifle of some sort (M-16 or a M-32), several fragmentation grenades as well as a Marine Combat Knife.

Lonzo Wilkinson was the warlord of a sizeable urban street gang. However, some unknown cause made him decide to enlist with the American Armed Forces. He used the skills that he gained on the streets to stand out in his class, and quickly excelled in all aspects of military school.

Upon graduation, he served the military in any capacity that he could, and eventually found himself leading a Long Range Recon Patrol in Việt Nam. The unit was an exceptionally effective one, and was made up of:

The group grew close (though none as close as Snake-Eyes and Tommy), and survived many missions together until they were lured into an ambush. Only Lonzo, Tommy and Snake-Eyes survived the initial attack. When they attempted to escape Snake-Eyes fell under enemy fire. Lonzo ordered Tommy to leave him behind.

Tommy refused and went back to rescue his friend. To Lonzo’s surprise did so successfully. Tommy and Snake-Eyes both left the military after the mission, and guilt riddled Lonzo over his decision to leave Snake-Eyes behind. Despite this, he stayed with the military.

Years later, Lonzo along with his fellow soldier Clayton Abernathy was offered the opportunity to assemble a covert strikeforce. This unit would face threats outside the reach of the “normal” military. Lonzo immediately accepted, and started recruiting for the team. 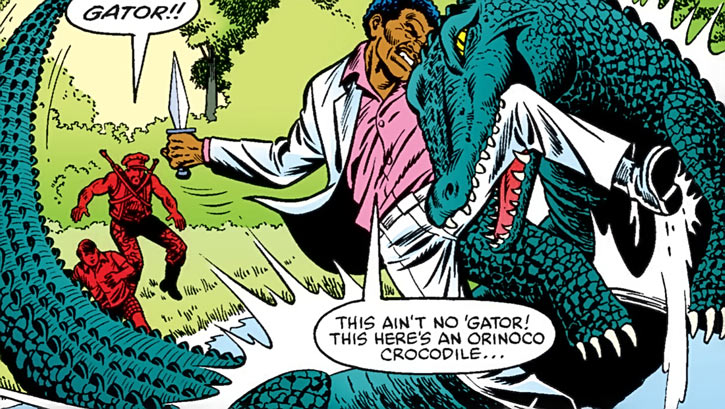 Lonzo (then going by “Stalker”) convinced Hawk that Snake-Eyes would be an excellent addition to the team. Thus, the two travelled to the High Sierras to convince him to join.

With the team assembled, Stalker acted as Hawk’s second in command. He led the team through several successful engagements over the next several months. He spearheaded a unit onto Cobra’s Island base and rescued Doctor Adele Burkhart. He used his resourcefulness and Snake-Eyes’ persistence to win over the mercenary Kwinn in the Arctic and ultimately defeat Cobra’s plans there.

While on a mission in Afghanistan, he defeated both Cobra’s forces and the Russian Oktober Guard. This came after disobeying orders and pushing his team to continue the engagement when things went south.

Most of Stalker’s missions were won in the same manner. He found victory through a combination of his ability to inspire faith in his decisions and his sound tactical judgement.

Later, Stalker was put in command of a mission to recover Snake Eyes after he was captured by Cobra Forces in Sierra Gordo. During the mission, Stalker was severely wounded and unable to move. Riddled with guilt over his previous abandonment of his friend, Stalker ordered the Joes to leave him behind and to save Snake Eyes.

Snake Eyes refused to follow orders. After taking command of the unit, he ordered the rest of the team to leave with Stalker while he remained behind to hold the Cobra forces off. Stalker was airlifted out of the Sierra Gordo while Snake Eyes was captured once more. A few days later, Snake Eyes was recovered from the Cobra Consulate in New York by Scarlett and Storm Shadow.

Stalker is an African-American male of average height and weight with a lean athletic build. Like virtually all African-American males, Stalker has dark brown eyes and black hair. He normally has a thin mustache on top of his upper lip, and a well maintained short afro.

His uniform consists of a light and dark green camouflage top (with light green belt and straps) and similarly coloured Khaki type pants. His ensemble is finished off with thick black combat boots, a pair of green gloves and a green beret that sits perched atop his head.

Stalker’s experiences as a warlord in Detroit and the jungles of ‘Nam have tempered him into a ferocious fighter and a cunning leader of men. He is acutely intelligent, as patient as a hunting cat and equally as ruthless when necessary. He is willing to do virtually anything to achieve his assigned goal, even if it means skirting the edge of mutiny to do so.

What makes him even more dangerous is his raw charisma which he often uses to inspire the men who follow him, or to convert those who oppose him.

During the early stages of his career, Stalker’s pragmatic nature allowed him to abandon his allies if the situation warranted it. However, years of experience with the G.I. Joe team as well as a deep sense of lingering guilt (over his attempt to leave Snake Eyes behind in ‘Nam) caused him to have a dramatic about face.

Stalker will now never willingly leave an ally behind, regardless of the personal cost he may incur.

“This ain’t no democracy ! I’m in charge here and I’m exercising my prerogative to make a field command decision to examine the options !”

“A raw-butt green recruit knows better than to light a fire in hostile territory !!!”

“What you’re fighting for is Burkhart’s right and every other American’s right to believe in whatever they want to — providing it don’t hurt anybody else ! Personally, I think Dr. Burkhart is an uppity, self-centered, pretentious old windbag and if I even suspected for one second that our saving her would alter her convictions one iota… I’d lose every shred of respect that I have for her.”

“There just ain’t enough brave men left in the world that we can afford to leave them for dead on the killing ground. I know that now…”

Drawbacks:
MIA toward Patriotism, MIA towards Not Abandoning his Teammates, Secret Identity. 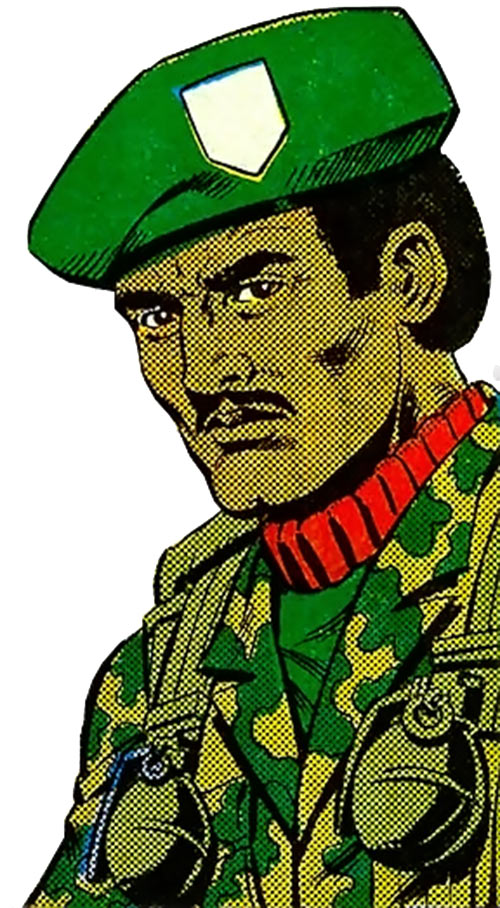 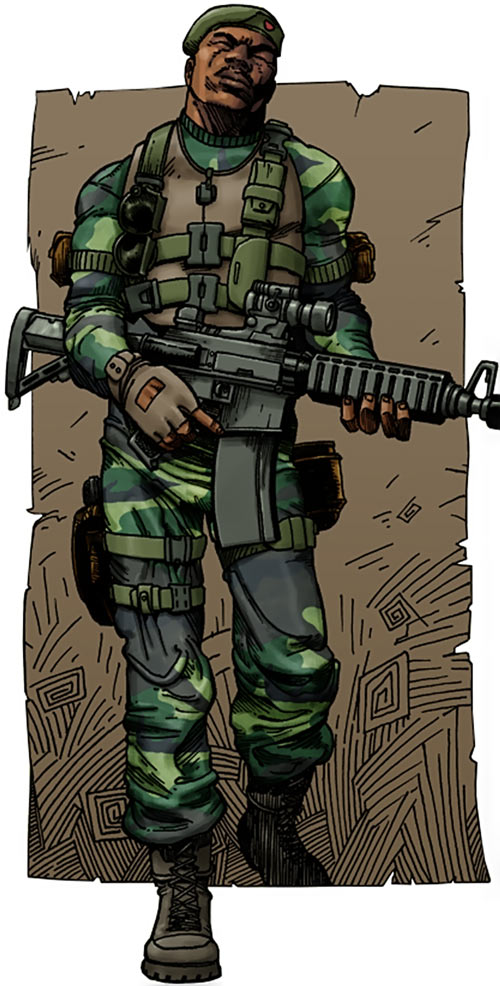 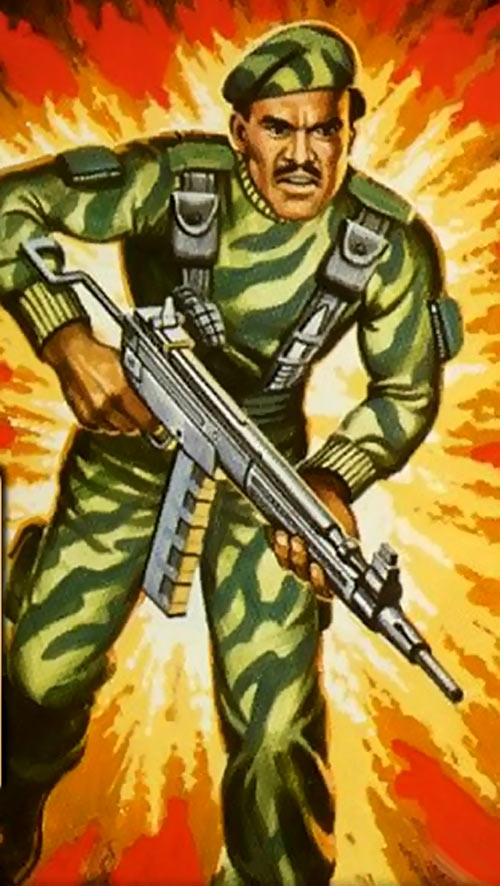 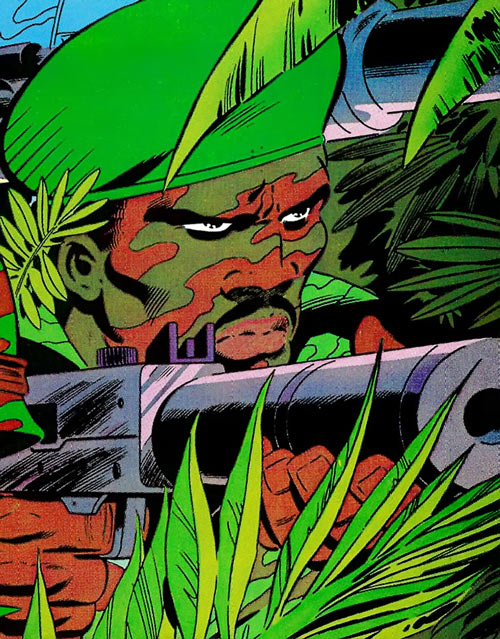 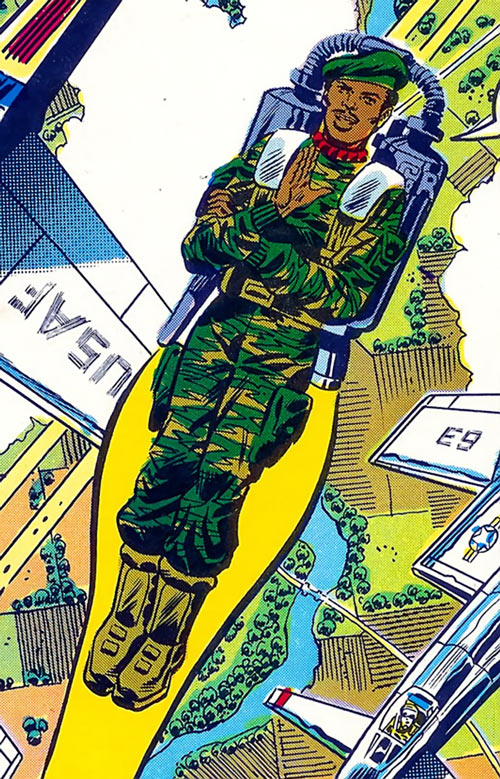 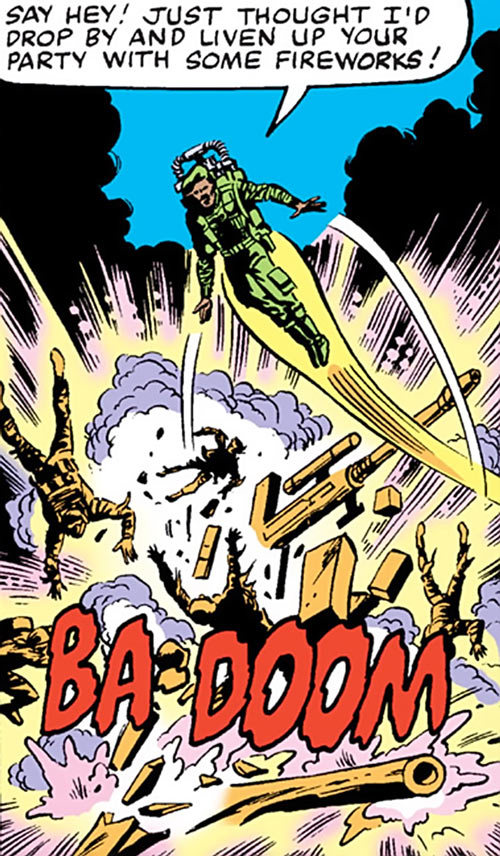 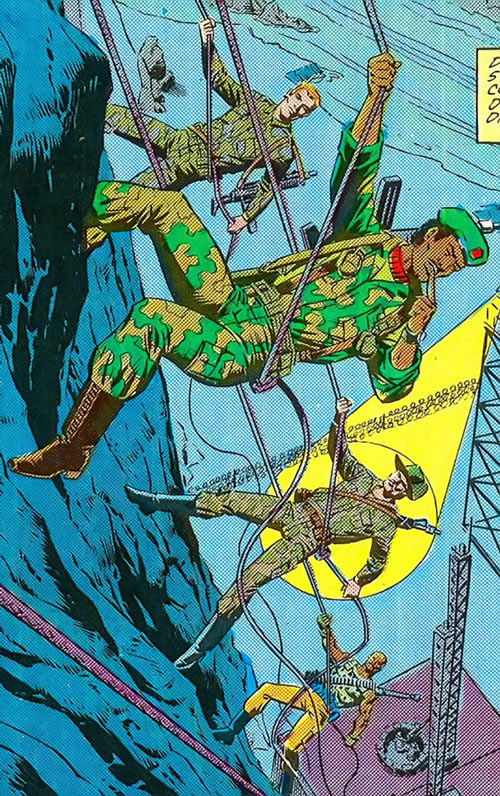