Stallion is a corn-fed, steroids-bolstered hulking mass of muscle. He doesn’t have real combat training – but he doesn’t really need it. Beyond his huge strength and mass he’s a natural at brawling, has lots of fighting experience and has genuine aggression and killer instinct. 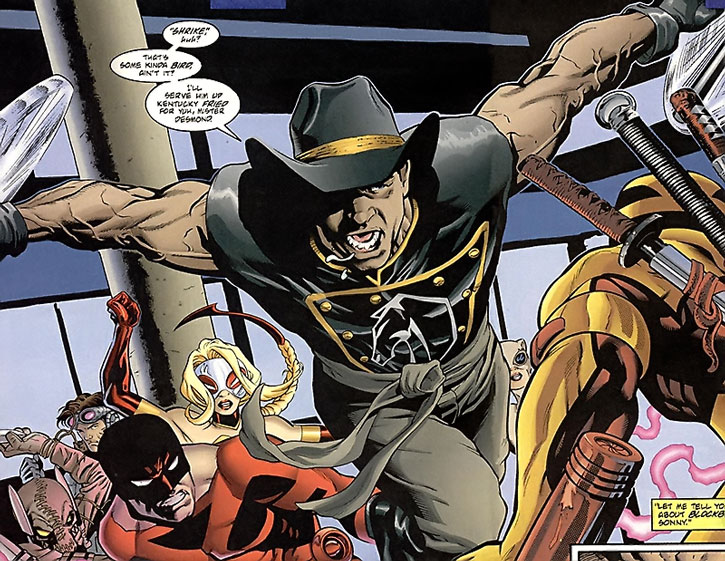 Stallion will probably not fare well against real masters of unarmed combat such as Nightwing (Richard Grayson). But he can kill several armed men with his bare hands without major difficulty. He also excels at intimidation – also more through mass and ferocity than real training.

When he expects serious opposition, Stallion tucks one or two steel nunchaku in his belt. He’s decent with these, and they further increase his reach and strength.

Hanrahan’s knees are in a terrible state. He can run for a bit. But if he has to put more stress on his knees — or if he’s hit there — he’ll likely become unable to walk until he sees a doctor.

Gifted with an impressive frame, Randy “Stallion” Hanrahan was a promising gridiron football player – a wide-receiver. He was recruited by the Dallas Cowboys, and was looking toward a Super Bowl ring.

However, his career was destroyed by a severe anterior-cruciate ligament injury to both knees during pre-season scrimmage. His marriage apparently also collapsed in the wake of his injury.

Hanrahan ended up a criminal enforcer and moved North. He found employment in Gotham at the Penguin’s Iceberg Lounge, as a “repossessor of defaulted loans”. Stallion soon moved up from faceless muscle man to colourful enforcer with a rep. By 1997, he was working in Gotham’s neighbouring city, Blüdhaven, for the new local crime lord Blockbuster (Roland Desmond).

Blockbuster paired Stallion with a much more technical fighter, Lady Vic. However, they ran into Batman (Bruce Wayne) himself and were swiftly defeated. Some months later Blockbuster send Stallion and another hitman, Brutale, to an hospital to kill a patient thought to be Nightwing. But the real Nightwing defeated Stallion by kicking his right knee out.

Call me hoss, I’m the boss, with the sauce and the horse

In 1999 a pair of French thieves-acrobats, the Double Dare, stole from Blockbuster. He responded by sending Stallion, Brutale and the Electrocutioner after them. They located the circus where the Double Dare worked and welded their trailer shut. They then hitched it to a truck and drove away to dump the trailer off a cliff.

However Nightwing was also present in the trailer. In the subsequent fray, Stallion was accidentally hit by a discharge from the Electrocutioner, but survived. 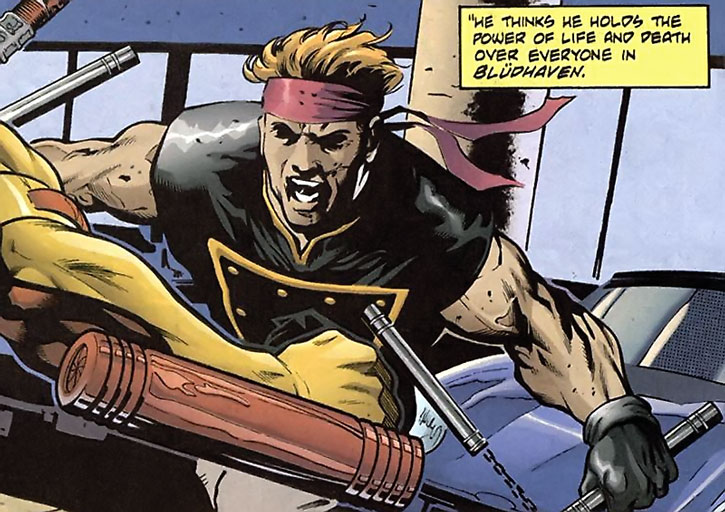 Some months later, Blockbuster managed to track his enemy Oracle (Barbara Gordon) down. Stallion led a fire team in storming possible Oracle hideouts. One such raid led Blockbuster’s men straight into a stronghold of the Lucky Hand triad. Stallion was the only man left standing.

Yet Blockbuster and his men did find Oracle, though Stallion was briefly incapacitated by a nausea-inducing gas trap.

By 2001, the displeased Blockbuster pitted his old enforcers against his newest recruit, Shrike (Boone). Stallion was the first to charge in, and was easily beaten by Shrike. Though he survived the blows, Stallion was presumably fired.

In 2004, Stallion had been re-hired by Blockbuster, though presumably not at the same rates. He was leading a fire team when they ran into an enraged Nightwing, who thrashed them without giving them a chance to fight back.

Hanrahan was in Blüdhaven during the city’s destruction in 2006. His fate remains unknown, and he hasn’t been seen in years.

Officially Stallion is 6’4” and 263 lbs. The values in the Background block above are higher to represent how he’s usually drawn.

Stallion loves the image of the all-Texan jock and good ol‘ boy, and has adopted it to stand out. He has a strong Texas accent, and goes out of his way to wear cowboy stuff (large hat with a cavalry band, big shiny belt buckles, riding boots, a vest styled after a Confederate officer’s…). He makes a point of peppering his speech with references to horses, the prairie, the rodeo, etc.. 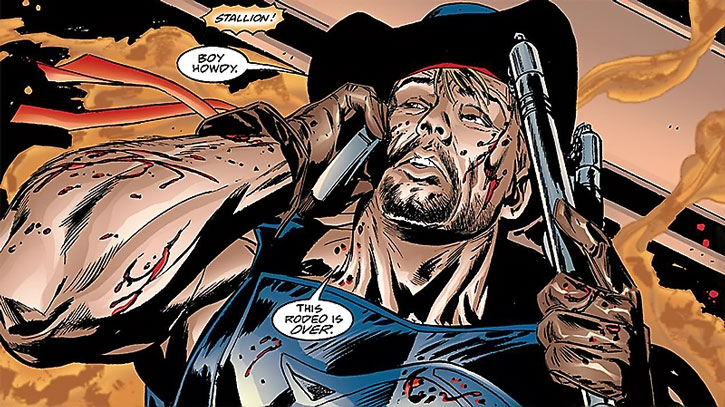 Hanrahan ain’t the sharpest tool in the shed, though. This will become quite evident after two or three minutes of talking with him. Or about 30 seconds for attractive young women. Or 10 seconds for if they’re a blonde. He’s both a womaniser and a racist, and has a tendency to state the obvious while munching on a matchstick or drinking a Bud.

Still, Stallion is a loyal and courageous employee with a taste for fighting and killing.

“I been waitin’ to whup butt on this Nightwing guy. I only wish that Batman feller was laid up with him.”

“No problemo, sir. You point that rascal out and we’ll bury him out on the lone prairie.”

Note:
Stallion nearly always uses the Force Interaction Manoeuvre along with his Intimidation Subskill, or to interrogate. This gives him a -1CS OV/RV bonus against people whose STR is below his own. He’s often eligible for the bonus just by standing there, since his strength is obvious. 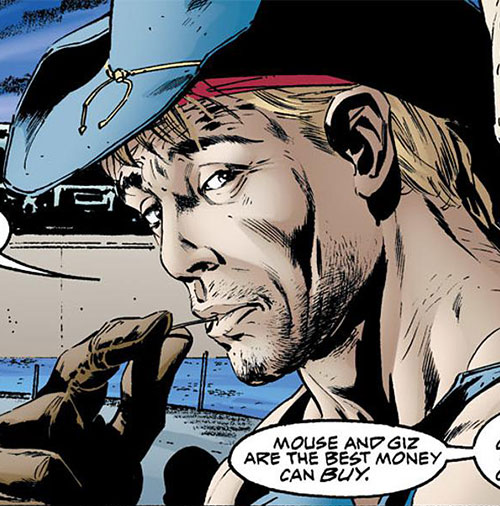 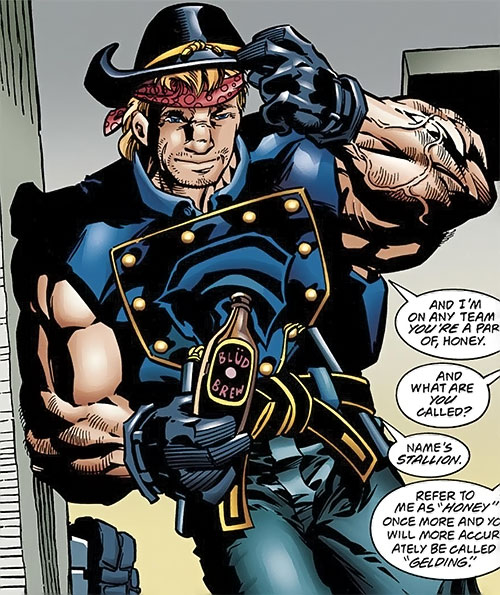 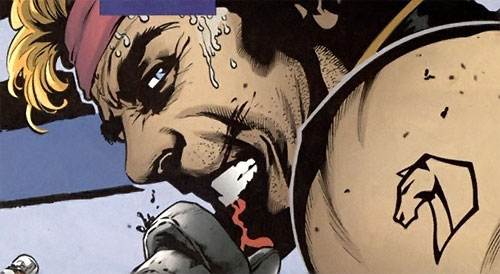