The Star-Stalker isn’t your typical Vorm ! No sir ! He’s a mutant specimen with low-cosmic-scale powers.

His primary ability is energy vampirism. Anything touching or being touched by the Star-Stalker will be drained of its life-force. Or of its powering energy, if it’s a machine such as a suit of power armour .

This attack isn’t usually lethal. Still, it could take down even the likes of Thor or Iron Man within seconds, leaving them prone and unable to move for several minutes.

The Star-Stalker did not appear to age. One imagines that the immense quantities of energy he can absorb make him functionally unageing and immortal.

If he’s on a planet, the Star-Stalker can drain a tiny part of the planet’s energy to generate a “ionic cocoon”. It looks very much like the cocoons used by Adam Warlock to heal and transform himself.

After several hours in the cocoon, the Star-Stalker will emerge in a larger, stronger form. It looks much like his normal body, but has a smooth and slightly metallic-looking skin rather than a scaly hide.

This form is capable of draining the “ionic  energy” of an entire planet. This leaves it barren (and quite possibly physically damages or destroys it) and feeds the Star-Stalker. Thus, he has been likened to a mini-Galactus.

Even in his base form, the Star-Stalker is powerful enough to engage the classic Avengers. He : 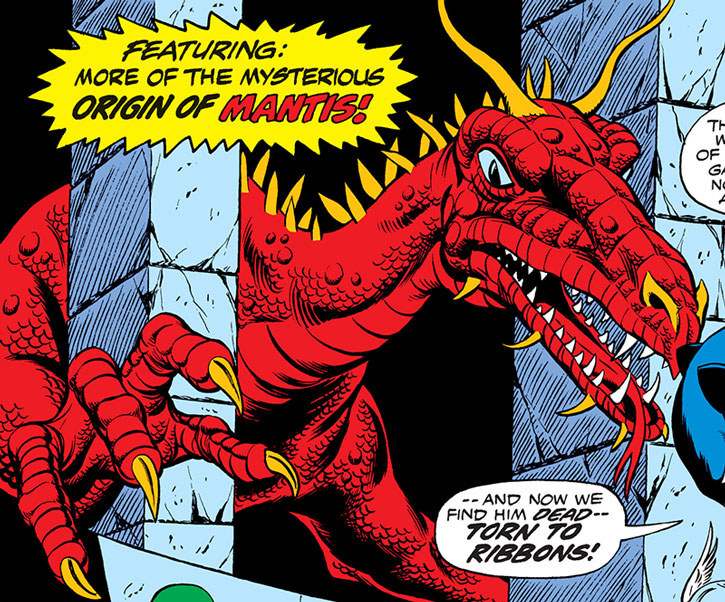 The Star-Stalker could somehow immediately sense, over cosmic distances, that the Priests of Pama in Việt Nam had been slain. Our No-Prize Hypothesis  is that he can place “psychic alert triggers” mentally informing him that a temple of Pama has fallen.

The underlying assumption that he places such an alert trigger whenever he runs into a Temple of Pama.

This is *not* demonstrated in the material. Instead, it is presented as the most economical explanation as to how he immediately knew what had happened in Việt Nam.

The mutant Vorm is highly sensitive to heat. A hot sunny day on Earth causes him constant pain, and the likes of lava or the Vision’s solar eyebeams could gravely wound or even slay him. However, this has to be a very specific… “kind” of heat, for lack of a better word.

For instance Iron Man’s repulsors or the Zodiac’s Star-Blaster did inflict pain. But it was the “wrong kind” of heat and the Star-Stalker could absorb the attack and feed off it.

Since it doesn’t seem to make scientific sense, it is possible that this vulnerability is mystical. Perhaps it is based on some Vorm symbolism ?

The Star-Stalker is a powerful mutant of the Vorm species. These are space aliens who look a bit like humanoid red dragons. He is a solitary exile feeding off entire planets, flying through space under his own power to locate suitable targets.

Having a strange susceptibility to heat, the Star-Stalker usually targets uninhabited worlds. Worlds with inhabitants tend to be close to their sun (in the Goldilocks Zone ), tectonically active, etc. and thus hostile to the Star-Stalker.

This also means that the lone alien, despite his ability to speak all languages, has had few contacts with the galactic community. For instance, he had never heard about Galactus.

Millenia ago, the Star-Stalker came across a barren world existing in a perpetual night. He was surprised to find inhabitants there. These people were dissident monks, the Priests of Pama. They had been exiled there by the Kree Supreme Intelligence to be punished for their pacifist beliefs.

The Priests had been eking a bare subsistence there, both for themselves and their plant-like allies the Cotati. 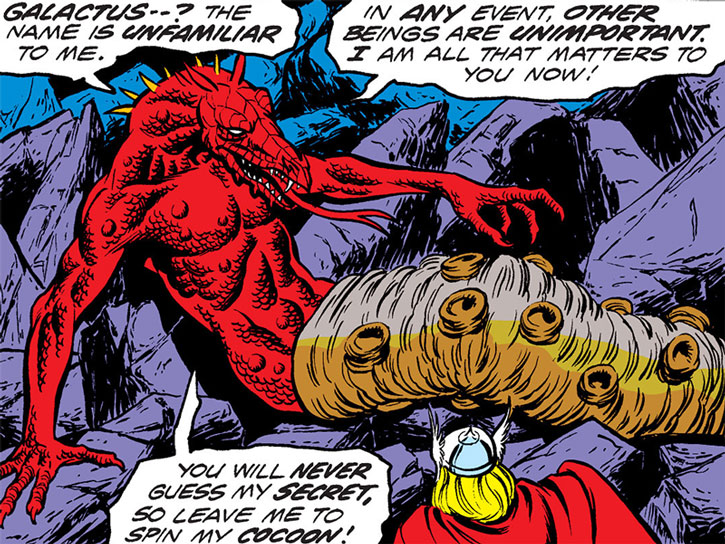 The Star-Stalker announced to the passive monks that he would consume their world. Once he exited his “ionic cocoon” and started doing so, the monks allowed themselves to attack.

Though he was vastly stronger than them, they guessed his vulnerability. The monks punched the ground in unison, opening a fissure deep enough to draw magma to the surface. The burned Star-Stalker barely escaped.

The Priests went on to capitalise on their knowledge of the Star-Stalker’s weakness. They offered the Supreme Intelligence to defend other worlds against this alien. A deal was struck, and pairs of Kree monks (plus, clandestinely, their Cotati friends) migrated far and wide through the galaxy.

They apparently even developed kung-fu powers making them immune to the energy-draining touch of the mutant Vorm. But perhaps their control of their life-force allowed for this all along.

Unbeknownst to the Star-Stalker or the Kree monks, the entire incident had been engineered by the Cotati. They had telepathically attracted the Vorm to the prison world. The crisis had played out exactly as they had predicted.

In 1974, the temple of Pama hidden in the Vietnamese jungle was attacked by gangsters. The priests were killed. Somehow, the Star-Stalker immediately sensed this. Thus, he was on Earth within minutes to seize the opportunity and drain the planet dry.

He arrived when the gangsters were still there. The alien killed them all, including their leader monsieur Khruul.

The Avengers responded, but found that they couldn’t beat the Star-Stalker. The alien then spun his “ionic cocoon”. The Avengers engaged him anew as he came back in his more powerful ionic form. Yet even the super-powerful Star-Blaster cannon built by Cornelius van Lunt’s Zodiac conspiracy failed to harm the Star-Stalker.

However, the Avenger Mantis (Ms. Brandt) deduced what his weakness was. Thus, she had the Vision attack the Star-Stalker with his solar eyebeams. This attack immediately slew the mutant Vorm.

In 1990, a draconic giant calling himself the Star-Stalker and claiming to be the son of the original clashed with Nova (Frankie Raye) and Power Pack. But Raye destroyed him.

However, Legion members are generally thought to be fac-similes rather than the actual dead persons.

The Star-Stalker acted like a grandiose force of nature. He treated his opponents as scum whose stance made no sense. He presented his feeding as unpreventable cosmic destiny.

He was confident and made various pronouncements about his supposed invulnerability. Which did work, as the Avengers believed his statement that he was invincible. However, he was also too confident and announced that he had a weakness, which the Avengers inevitably deduced.

“I came from beyond the stars !”

(As Iron Man fires his repulsors at Star-Stalker) “SSSSS ! Rays from your appendage — burning — searing — but ultimately, FEEDING ! Strike me again, metaloid ! It is to feed that I am here !”

“I am invincible ! Nothing you can do can injure me in any fashion ! — and I mean to destroy your planet !”

Bonuses and Limitations:
Immortal is Contingent Upon the Vampirism power in his ionic form (see below).

Equipment:
COCOON. Star-Stalker can generate a “ionic cocoon” to activate his “ionic form”. He assumed that he was invulnerable in this cocoon, so it might be treated as equipment : [BODY 25, Hardened Defences].

If the Star-Stalker spends several hours in his cocoon on a planet from which he can absorb energy, he will activate his “ionic form”, giving him higher scores.

Technically this is considered a Power Loss Vulnerability. The higher APs are inaccessible until the cocooning takes place. 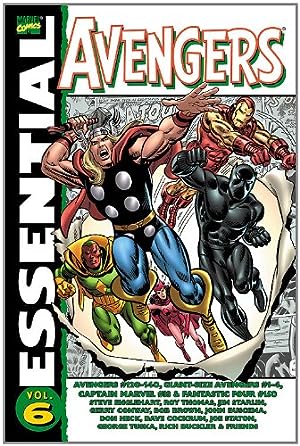 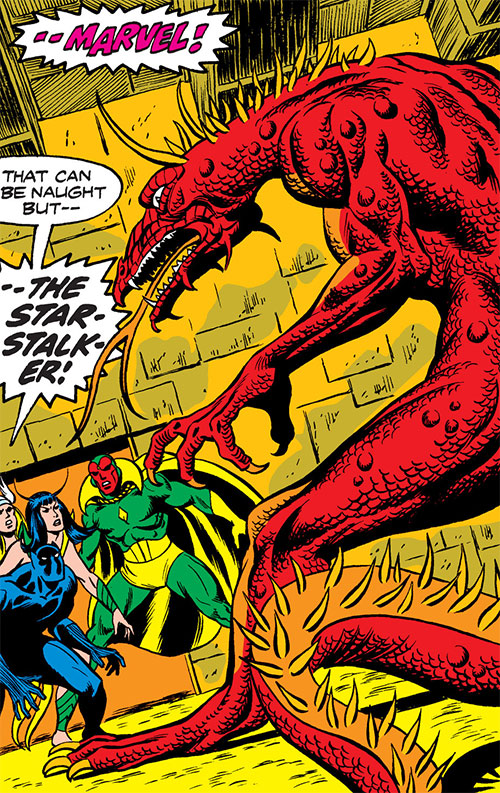 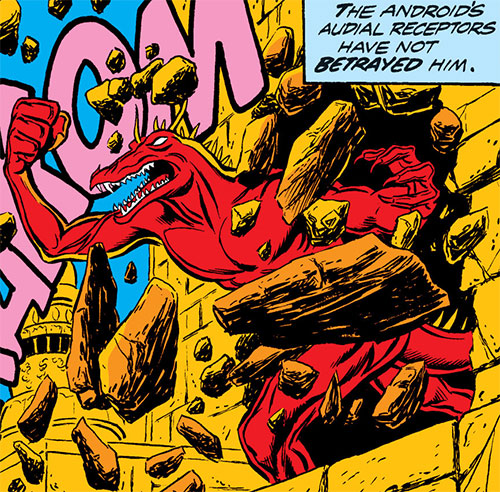