As an android, Data enjoys superhuman physical and computational abilities.

Data was constructed by Dr. Noonian Soong on the colony of Omicron Theta. The colony was destroyed by the Crystalline Entity before Data was activated. Data was found by the U.S.S. Trieste and joined Starfleet. He has worked his way slowly through the ranks, due in part to prejudice against his artificial nature. He has had to defend his sentient status in court on three occasions.

He currently serves as Operations Officer on the Enterprise-D.

Data had an “evil twin” named Lore, an android exactly like Data albeit with psychotic tendencies. Lore was eventually captured and dismantled by Data.

Data was destroyed during the Enterprise-E’s battle with the Scimitar in 2378, but his memories live on in another android of the same design, B-4.

Other than his skin tones, Data’s body appears perfectly human to superficial inspection. He even has a pulse (micro-hydraulic regulators), breathes (heat management), and can regulate the growth of his hair follicles.

His appearance is designed to change over time to mimic the appearance of normal aging. Data tends to move in a slightly mechanical and very controlled manner.

Data wants to become human by learning and experience more so than simply having it given to him. By the same token, when it is more or less forced upon him as it was in “Descent” and in ST: First Contact, it can be very tempting to accept even when he knows it is wrong.

Nevertheless, it is relatively easy for Data to pursue other goals even when the opportunity presents itself for him becoming a human being. Saving the lives of the crew is more important than him succumbing to treason in order to pursue his quest for humanity.

Despite Data’s protestations that he has no emotions, his actions demonstrate that he has comparable cognitive processes. He considers Geordi La Forge to be his best friend and enjoys social interactions among the crew such as playing poker (he will even play the game with historical figures on the holodeck for variety).

He’s very polite and eager to please, which spurs him to go into often-unnecessary detail when answering other’s questions for the sake of completeness.

He pursues various pastimes such as art and music to better understand the feelings of human beings. Data has actually developed some innovative approaches in those areas, though he still struggles with certain types of intuitive behavior such as the use of slang, humor, and contractions.

Data has decided on two occasions that emotions were too much for him to handle (at the end of “Descent” and during ST: Generations) because of their negative, even crippling initial effects on him. But in both cases he eventually decided that he needed them to evolve as a person.

At first, Data thought that positive emotions (such as happiness) were good and negative emotions (such as hatred) were bad, and that they defined him as what kind of person he really is. Since he at first only could feel hatred and pleasure after killing someone in self-defense, he drew the conclusion that he has to be evil himself.

After having an explanation that emotions themselves are neither good nor bad in themselves but neutral, and the only the acts that are done as a consequence of those emotions can be judged as good or evil, Data reached more realistic conclusions. He realizes that the emotions are necessary for progression as a human being.

The final conclusion is, according to Data, that emotions are neutral (or both good and bad at once), and that he needs them for advancing further. Of course, Data has a big advantage over humans when it comes to emotions ; he can close off his emotion chip in situations where he needs an extra cool head (as seen in “First Contact”).

“At your service, Captain.”

The Enterprise-E crew has encountered the Marvel Universe’s X-Men on two occasions. The first encounter occurred when the Enterprise-E attempted to use the Borg temporal vortex to return home from 2063 (ST: First Contact).

The Enterprise-E crew was accidentally shunted into the Marvel universe and helped the X-Men fight Kang the Conqueror (the MU villain, not the Klingon Commander) before returning home (Star Trek: The Next Generation/X-Men: Second).

Later, several X-Men traveled to the 24th Century and assisted the Enterprise-E crew in dealing with spontaneous mutations on a Federation-allied planet (“Planet X” novel). The Enterprise crew could easily encounter residents of the DCU under similar circumstances, particularly if Hypertime is involved.

Later in his career Data began experimenting with modifying his body with various gadgets. Examples of this include using an actuation servo to open a hidden compartment (Generations), inflating a built-in flotation device to save a drowning woman (Insurrection), and carrying an Emergency Transporter Unit (Nemesis).

Prior to the installation of Data’s emotion chip, his ability to relate to others was limited. He could not spend HPs to boost his Mystical Attributes in play, he had to spend twice as much on character advancement to increase his Mystical Attributes, and Character Interaction attempts involving Data (whether he was using them or they were being used on him) suffered a +2CS to OV/RV.

He also had Iron Nerves and was immune to Mental or Mystical Powers that only affected living beings, such as Empathy. When Data’s chip is active, ignore all of the above.

During the first season of the series Data had Socially Inept (Minor). His experiences and friendships with the Enterprise crew quickly helped him overcome or at least ameliorate his more annoying personality traits.

For most of the series, Data’s SPIRIT was only 03. His emotional development between ST: Generations and ST: First Contact raised SPIRIT to its current 04. 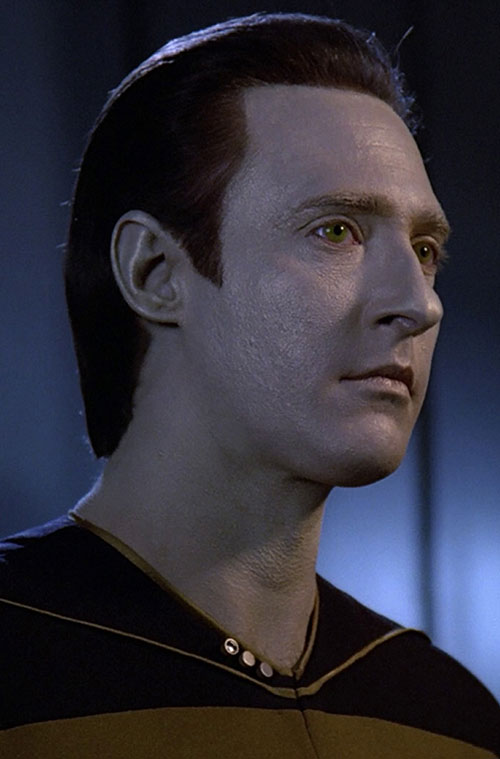