Beverly Crusher is a highly skilled medical doctor. She has vast experience in a variety of settings from classic carbon-based lifeforms to exotic ones.

She also has a great many artistic interests, ranging from writing and directing plays to dancing to cooking.

Beverly Crusher spent most of her career at Starfleet Medical headquarters on Earth. Her husband Jack served as First Officer under Captain Picard on the Stargazer. After Jack died she blamed Picard for a long time. She eventually forgave Picard and even accepted the opportunity to work with him on board the Enterprise-D.

In 2365 Dr. Crusher left the Enterprise to accept the position of head of Starfleet Medical. She arranged for her son Wesley to stay onboard the Enterprise so he could continue his work as an acting Ensign.

After a year at Starfleet Medical she decided to return to her previous post as CMO of the Enterprise. She had missed Wesley and wanted to be closer to him.

Wesley initially chafed at having his mother watching over him again. But they finally had a discussion in which Beverly realized she had to treat her son as the young man that he was becoming rather than the child she remembered (“Evolution”).

Crusher may have missed being in a more active role as well, judging by her drive become more involved in starship command (best demonstrated in “Descent, Part II”). Indeed, in one alternate future, she had become the well-renowned captain of the medical ship U.S.S. Olympia (“All Good Things…”).

In 2378 Dr. Crusher left the Enterprise-E, this time to become head of Starfleet Medical for good.

Beverly Crusher is a statuesque Caucasian female with grayish-blue eyes and strawberry-blond hair, usually worn at shoulder length. She often wears a powder blue lab coat over her duty uniform.

She has a very professional bearing as a doctor and does her best to maintain a certain amount of stoicism in crisis situations.

Anyone who wants to tackle this, feel free.

The Enterprise-E crew has encountered the Marvel Universe’s X-Men on two occasions.

The first encounter occurred when the Enterprise-E attempted to use the Borg temporal vortex to return home from 2063 (ST: First Contact). The Enterprise-E crew was accidentally shunted into the Marvel universe and helped the X-Men fight Kang the Conqueror (the MU villain, not the Klingon Commander) before returning home (Star Trek: The Next Generation/X-Men: Second).

Later, several X-Men traveled to the 24th Century and assisted the Enterprise-E crew in dealing with spontaneous mutations on a Federation-allied planet (“Planet X” novel). The Enterprise crew could easily encounter residents of the DCU under similar circumstances, particularly if Hypertime  is involved.

Used separately, Dr. Crusher might be encountered as a medical specialist with S.T.A.R. Labs or another similar institute, engaging in the study and treatment of metahumans (simply replace her Xenophysiology Scholar with “Superhuman Physiology”). In the 30th Century, she might work alongside Dr. Gym’ll (if he still exists post-ZH). 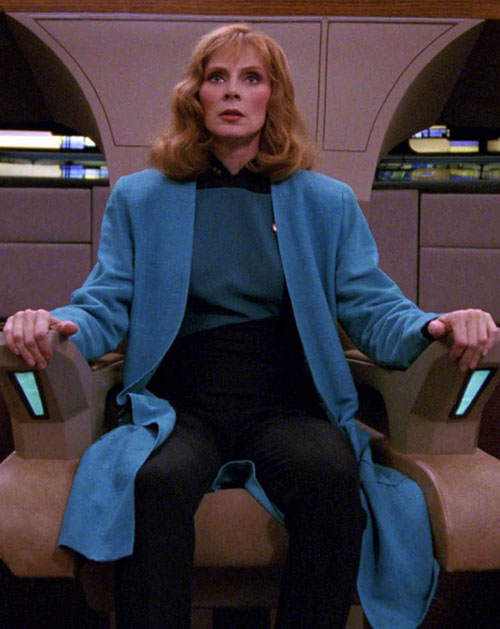