She is trained in the field of psychology and has several years experience as a ship’s counselor and diplomatic aide.

Deanna Troi was studying psychology on her home world Betazed when she met a young Lieutenant Riker. They had a brief and intense romance, but ultimately Riker decided to focus on his career instead. Troi joined Starfleet as an officer due to her psychology training and eventually ended up working with Riker on the Enterprise-D.

Her knowledge and experience in dealing with alien species and her empathic abilities have made her an invaluable assistant in many delicate negotiations held on the Enterprise. Troi and Riker renewed their romance during the Briar Patch incident and married shortly before Riker took command of the USS Titan.

A fan selection of Troi sequences from ST:TNG’s third season.

Troi is a sultry Caucasian woman of medium height and build with wavy brown hair and dark eyes. During her first few years on the Enterprise she wore tight-fitting casual wear while on-duty, but eventually took to wearing a duty uniform in order to be taken more seriously as a member of the command staff.

As befits a counselor, Troi is usually very calm and patient. She will often even assume a playful mood to lighten up brooding individuals with whom she is working.

Like many counselors, she sometimes struggles with the tension between maintaining a professional demeanor while dealing with her own sympathies and emotions. This was particularly true earlier in her career, as seen by her distress in episodes such as “The loss”.

The adversities Troi has faced during her time on the Enterprise-D and -E have strengthened her. When she was kidnapped and forced to play the role of a Romulan intelligence agent, she made the adjustment quickly and carried out her mission with great courage and ingenuity.

The Enterprise-E crew has encountered the Marvel Universe’s X-Men on two occasions.

The first encounter occurred when the Enterprise-E attempted to use the Borg temporal vortex to return home from 2063 (ST: First Contact). The Enterprise-E crew was accidentally shunted into the Marvel universe and helped the X-Men fight Kang the Conqueror (the MU villain, not the Klingon Commander) before returning home (Star Trek: The Next Generation/X-Men: Second).

Later, several X-Men traveled to the 24th Century and assisted the Enterprise-E crew in dealing with spontaneous mutations on a Federation-allied planet (Planet X novel). The Enterprise crew could easily encounter residents of the DCU under similar circumstances, particularly if Hypertime  is involved.

Troi herself can be used as a metahuman psychiatrist (in both senses of the phrase), much like Doc Samson in the Marvel Universe.

Up until the sixth season, Deanna Troi’s MIND was only 4 APs. As she gained more professional confidence, her MIND increased to its current level and she began wearing a standard duty uniform.

Helper(s): I seem to have lost the names of my helpers for this one. Danielle Mendus and Sean MacDonald helped on v2.2. 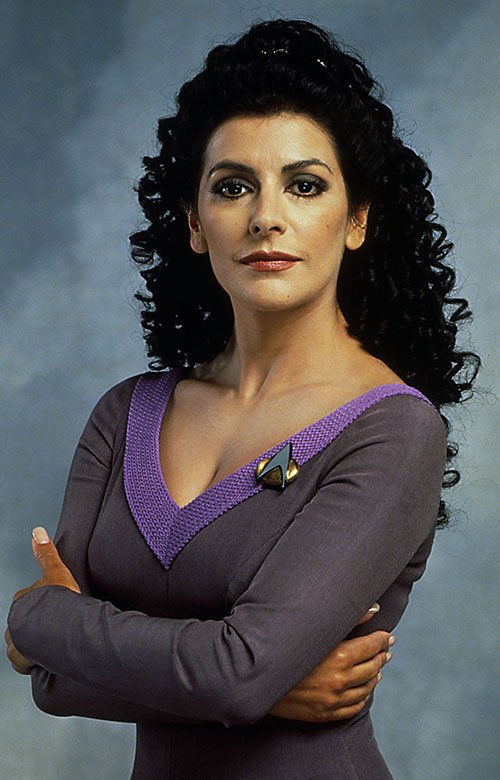