Miles O’Brien’s father wanted Miles to go to music school and pursue his cello playing professionally. At the last moment, Miles decided to follow his own ambitions instead. He joined Starfleet, graduating one year later as a non-commissioned officer.

He served with the U.S.S. Rutledge. O’Brien became that vessel’s tactical officer after his heroic actions at Setlik III. This was during a major border skirmish between the Federation and Cardassia.

His shining moment during that battle was getting a field transporter working in time to save 13 men. That was even though he had no prior experience working with transporter systems. This incident also renewed O’Brien’s interest in studying engineering.

He later transferred to the Enterprise-D, the flagship of the Federation fleet. At first he served as a conn officer. But he subsequently shifted over to operations and a position as transporter officer. While on-board the Enterprise-D O’Brien met and began a relationship with botanist Keiko Ishikawa. That led to the two of them getting married.

Seeing more opportunities for advancement with a new posting, O’Brien transferred to DS9. He served as Chief of Operations there for seven years. During his time there his engineering expertise proved critical to accomplishing missions. It even saved the station on many occasions.

He also went through a number of harrowing events. That included:

After the Dominion War ended O’Brien accepted a position as Professor of Engineering at Starfleet Academy.

When Bajor joined the Federation in 2376, Keiko O’Brien decided to put her botany skills to use in rebuilding Cardassia’s agricultural resources. Miles followed with her (as seen in Unity from the Pocket Books DS9 relaunch).

O’Brien’s a man from common laborer roots. His ancestors fought for workers’ rights, and he shares many of the ideal traits of such men. He has a strong work ethic and believes in serving where he can help best. He values his family over everything else and does his best to protect them. This sometimes causes internal conflicts with his sense of duty to Starfleet.

He’s a very emotional man, fiercely loyal to friends. He is troubled by some of the unfortunate parts of his past such as the horrors of battle that he witnessed at Setlik III and his own violent behavior during that conflict.

O’Brien’s everyman quality (no relation) makes him very liked and respected by those who get to know him. He often serves as a good barometer of general public opinions and reactions to important events and subjects.

“You’re not an in-between kind of guy. People either love you or hate you. I hated you when I first met you. But now… Well… now, I don’t ! Really ! And I mean that from the heart. I really do… not hate you anymore.”

“I’m sorry I couldn’t find a nicer place to crash-land. Should we try again ?”

(Referring to the Mk II Medical Hologram being modeled after Dr. Bashir) “Think of it, Julian – if this thing works, you’ll be able to irritate hundreds of people you’ve never even met.”

Worf: “We were like warriors from the ancient sagas. There was nothing we could not do…”
O’Brien: “…Except keep the holodecks working right.”

(When a psychotropic drug had driven Garak homicidally insane)
Garak: “Maybe it’s true. Maybe you’re not a soldier anymore.”
O’Brien: “You’re right. I’m an engineer.” (Detonates improvised bomb, knocking out Garak)
(After Garak had recovered from the drug)
Garak: “If I had been any closer to that phaser it would have killed me.”
O’Brien: “Don’t take this the wrong way, but that was the plan.”

The Enterprise crew has encountered the X-Men on several occasions, including a crossover with Kirk’s and Picard’s Enterprise. O’Brien and the DS9 crew could appear in the DCU in a similar manner, particularly if Hypertime  is involved.

O’Brien can also be the poor lab tech that gets assigned to the JLA or Titans to watch over and maintain some funky new gadget at their headquarters. He’s lost count of how many times he’s been knocked unconscious by one supervillain or another.

Resources is not applicable because Starfleet provides anything that their personnel may reasonably need. 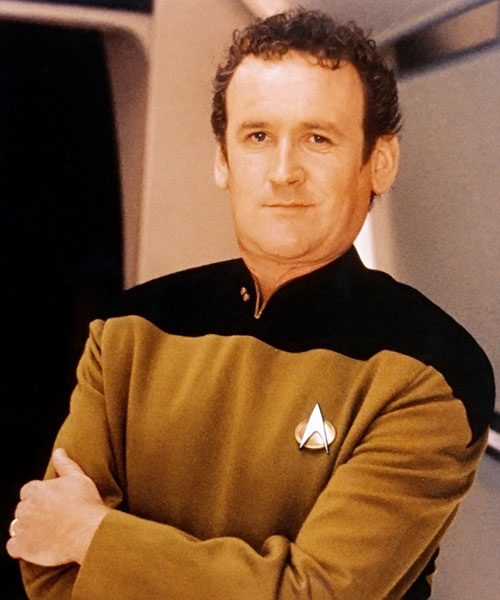