The show takes place on a politically sensitive large space station, which also becomes a major travel hub toward newly accessible system. It eventually turns into an important military objective.

This profile covers Kira up to the end of the DS9 TV series and through the Pocket Books DS9 Relaunch up to Unity.

Growing up as a resistance fighter against the Cardassian  occupation, Kira acquired an extensive knowledge of traditional military practices as well as unconventional guerrilla tactics.

She also excels with improvising equipment. For example, Kira has sent hidden encrypted signals piggy-backed on background radiation by modifying communication systems and has adapted ground-based phaser cannons for use on freighters that were not designed for heavy armament.

Kira often achieves impressive results by focusing her energies very strongly on whatever task she is facing. In DC Heroes RPG terms, she frequently uses Hero Points  to seize Initiative in combat and Press the Attack while spending HPs on AV/EV.

This often allows her to get excellent results against single opponents who have better physical abilities than she does. But it does make her more vulnerable in mass combat situations, frequently making her an early casualty when the crew enters close quarters combat with large numbers of enemies.

Colonel Nerys in an unusual exercise in lampshade  hanging.

Kira Nerys was born in 2343 during the Cardassian occupation of Bajor . She suffered a childhood of great hardships, living in profound poverty and losing both her parents to the Cardassians. Her father died during a Bajoran Resistance action and her mother was taken as a comfort woman by Gul Dukat.

As soon as she was old enough to fight Kira joined Shakaar’s resistance group in the Dakur province. She earned a reputation as a skilled guerilla soldier.

After the resistance forced the Cardassians to abandon their occupation of Bajor, Kira became part of the newly-formed Bajoran Militia. She was assigned a position as Bajoran liaison and first officer on Deep Space 9.

DS9, formerly known as Terok Nor, was an ore-processing space station that was left behind by the Cardassians. It was being administered by the United Federation of Planets until Bajor was self-sufficient again.

Kira was concerned that Bajor had traded one set of alien overlords for another. But working with Starfleet soon convinced her otherwise. Though she didn’t share all of the values of her Starfleet colleagues (most of whom she considered naïve in some respects), she recognized that their hearts were in the right place.

The next seven years would pit Kira against troubles foreign and domestic. She worked to foil extremist Bajoran political intrigues such as the attempted military coup by the Circle. She also helped to coordinate her peoples’ exploration and colonization of their home system as well as in the Gamma Quadrant.

Kira was also a significant part of several encounters with the Mirror Universe counterparts of the DS9 crew and their associates.

Nerys encountered with Aamin Marritza, a Cardassian who was attempting to expose the evils of his government’s actions during the occupation. That began to soften her attitude toward the Cardassians as a people. Her friendship with Gul Dukat’s half-Bajoran daughter Tora Ziyal would continue this trend.

After Benjamin Sisko’s disappearance at the end of the Dominion War, Kira Nerys was made commander of Deep Space 9.

(The following is non-canon, taken from the DS9 Relaunch series from Pocket Books)

Her work in that position has been exemplary, most notably in regard to foiling a recent invasion attempt by an old enemy of the Federation. Upon Bajor’s entry into the Federation, Kira became a Starfleet officer and was promoted to Captain.

Though Sisko has returned, Kira remains commander of DS9 with his support and blessing.

Kira Nerys is a passionate person. She was prone to strident displays of anger in her early years on DS9. That same drive made it hard for Kira to relax, so much so that Dr. Bashir found himself ordering her to take vacations on occasion. She still has that same fire, but it has been tempered by the lessons she has learned since she began working on the station.

Likewise, Kira takes a hard-nosed approach to her job. She responds to problems rather forcefully, though again she’s become more even-tempered with experience. She’s openly disdainful of people she doesn’t trust or respect regardless of their social or political station, such as Kai Winn.

She is careful about how she and others exercise their authority, her experiences during the occupation having given her a healthy distrust of using draconian measures to maintain order.

The black-and-white view of the world that Kira once had has also become more nuanced. The blind hatred Kira first felt for the Cardassians has been replaced by the realization that the horrors of the occupation reflected more on Cardassian society at the time rather than innate traits of their race.

The ultimate expression of her changing views was her assistance with the Cardassian resistance during their rebellion against the Dominion. Likewise, revelations regarding old friends and associates from her resistance days made her recognize that her heroes had flaws and those she disdained sometimes had good intentions.

Kira’s faith in the Prophets is a very important part of her life. She will often take the initiative to discuss issues important to her faith. However, she won’t subject others to proselytization or treat them differently for not sharing her beliefs.

Kira’s relationship with Sisko was awkward at times because it was difficult to relate to him as simply a co-worker and friend when he also occupied the prophesied role of Emissary in the Bajoran belief system.

“The provisional government and I don’t agree on a lot of things which is probably why they’ve sent me to this god-forsaken place. I have been fighting for Bajoran independence since I was old enough to pick up a phaser. Finally, we drive out the Cardassians and what do our new leaders do ? Call up the Federation and invite them in.”

“You Klaestrons are allies of the Cardassians, your knowledge of the station confirms that. They must have given you the layout, which not only compromises Bajoran security, but also annoys us.”

“I’m sure all you Starfleet explorers find this absolutely fascinating. But I’m a Bajoran administrator. This is not what I signed up for.”

“Some might say pure science taught without a spiritual context is a philosophy, Mrs. O’Brien.”

(After sabotaging DS9’s computer systems) “Dukat wanted the station back – he can have it.”

The Enterprise crew has encountered the X-Men on several occasions, including a crossover with Kirk’s and Picard’s Enterprise. Kira and the rest of the DS9 crew could appear in the DCU in a similar manner, particularly if Hypertime is involved.

In a Golden Age  storyline Kira could be an exile from an Axis-dominated nation who has become a plain-clothes American adventurer. She would have gotten herself lumped into either the Justice Society or All-Star Squadron. With a Golden Age Wonder Woman back in continuity, Kira might take the place of Helena “Fury” Kosmatos, albeit without the powers.

Bonuses and Limitations:
Gadgetry cannot be used to create new Gadgets but can be used to repair damaged Gadgets or add new abilities to existing Gadgets by combining them with others, such as adapting ground-based weaponry for use by normally-unarmed vessels (-1 FC).

Equipment:
See the Star Trek Federation Equipment write-up. Kira often uses Bajoran equivalents of Starfleet equipment, which have the same capabilities but are not quite as effective. GMs may want to reduce such item’s Powers by 1 or 2 APs to account for this.

Scholars (Underground networks) refers to methods of building and coordinating covert organizations and includes techniques such as creating compartmentalized cells of operatives and arranging secret communication protocols between them. 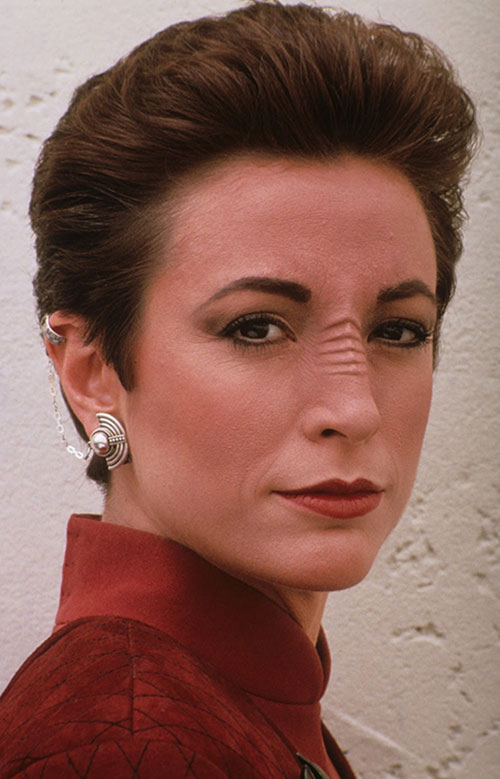 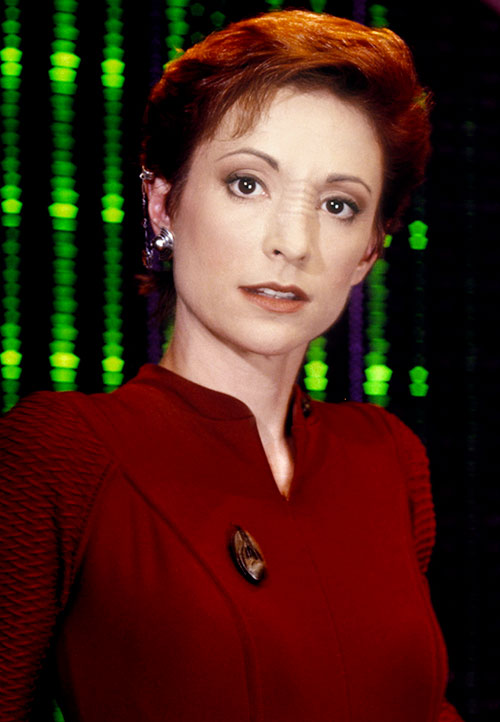 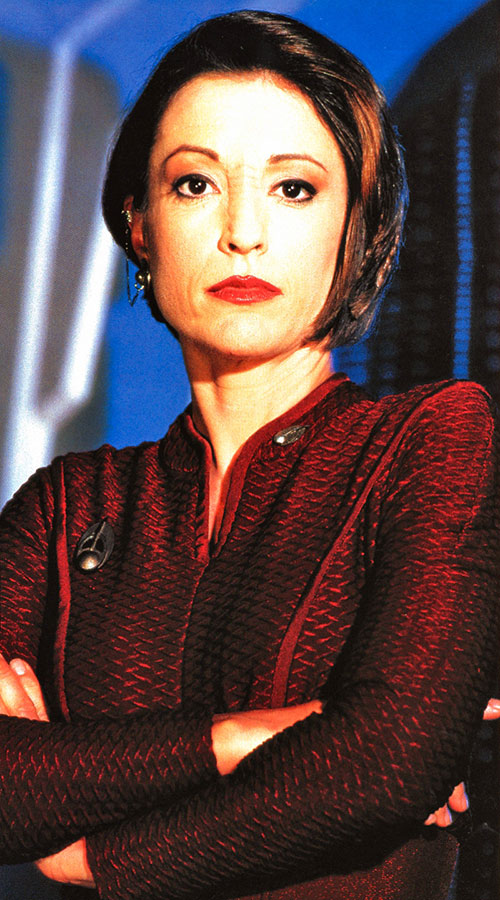