As a Ferengi, Quark possesses the natural physical attributes of that race. His large dish-shaped ears grant him acute hearing, his four-lobed brain is extremely resistant to telepathy, and he’s stronger than he looks (though not extraordinarily so).

Because of his acute hearing, loud noises can make it difficult to perform any actions — he’s usually to busy holding his ears and cringing to do anything effectively.

Quark’s dedication to wheeling and dealing have made him fairly adept at business matters over the years.

He also has an oddly inspirational strength of presence for someone so openly greedy and self-centered. He’s become a sort of community leader and de facto political activist for various concerns over the years. Quark is often liked even by those who are in many ways at odds with him.

While Quark’s primary duty during his freighter service was ship’s cook, he picked up a little engineering and transporter expertise as well.

He’s kept his computer skills sharp since a little hacking has gone a long way toward getting information for fun and profit as well as avoiding surveillance measures.

Quark was born on Ferenginar, the Ferengi homeworld, in 2333. His early life was largely unremarkable. Upon his Age of Ascension Quark left his home world in pursuit of wealth. His apprenticeship with a District Sub-Nagus ended when he was caught sleeping with the Sub-Nagus’s daughter.

After that, he served as a cook on a freighter. During this time he became familiar with basic engineering and transporter principles. Eventually, he acquired sufficient funds to start his own business.

Setting up shop on the Cardassian mining station and shipping port Terok Nor in orbit above Bajor, Quark made a modest living catering to the Cardassian soldiers. These were there as part of the Bajoran Occupation.

Quark’s deeply hidden altruistic streak began to emerge there as he sold food to Bajoran laborers at cost rather than trying to squeeze out a profit. During this time Quark’s brother Rom and his nephew Nog came to live and work with him.

When the Cardassians abandoned Bajor in 2369, Terok Nor was left in shambles.

Quark was going to relocate. But he was blackmailed into staying by Commander Sisko as a condition of freeing Nog, who’d been arrested for theft. Sisko was the Federation officer who commanding Terok Nor — renamed Deep Space 9 (DS9) — to keep the shipping port open. This interim would end when the new Bajoran government was ready to assume that responsibility.

Sisko recognized that merchants like Quark would be valuable to making DS9 a viable port again. This turned out to be to Quark’s good fortune.

A wormhole  connecting the Bajor system to the other side of the galaxy was discovered soon after. Quark’s bar was now situated in the last port of call for droves of scientists and entrepreneurs looking to explore the opportunities of the Gamma Quadrant.

The next seven years would bring a great many opportunities for profit and adventure, whether Quark wanted the latter or not. He:

Quark is a typical Ferengi in appearance. Therefore, he’s a brownish-orange skinned humanoid with an enlarged cranium whose subtle curves display the four-lobed nature of the Ferengi brain, large bowl-like ears, and a flattened nose. Quark’s smiles reveal his pointed teeth, but he’s harmless enough that they’re not frightening.

As with most Ferengi, Quark’s raison d’être is the acquisition of wealth. He found his lack of great success in that area galling, all the more so because of his cousin Gaila, who’d profited enough from his own ventures to buy a small moon (or so the story went).

At the same time, Quark had a bit of a soft spot. He would often trade needed supplies to disadvantaged people at little or no profit. Quark would justify it to himself as building good will. He also ultimately balked at selling arms, fearing that the deaths caused by them would be on his conscience.

Quark was a conservative Ferengi, valuing the dominant traditions of his culture and being very stubborn to accept change. He fought the unionization of his bar workers and had a falling out over his mother’s insistence on engaging in commerce despite it being a taboo for Ferengi females to do so.

He did come to terms with his mother’s acts and even helped rescue her when she was captured by the Dominion, albeit in a quest that turned out to be a comedy of errors.

Quark also shared many a saying from the Rules of Acquisition, a collection of 285 quotes that served as a sort of Hagakure for Ferengi businessmen.

Because of his dedication to traditional Ferengi values, Quark’s relationship with his brother Rom and Nephew Nog were strained. He took Rom in when his hapless brother lost everything in a divorce (his wife having better business sense than Rom).

Quark also tried to inculcate proper business values in his sibling. Rom’s first passion was engineering though, and he gave that increasing attention despite Quark’s urging him toward commerce.

Quark was even more concerned over Nog’s desire to join Starfleet instead of becoming a businessman. He felt that his nephew had been corrupted by the company of Federation citizens.

Despite his profound misgivings over his relatives’ life choices, Quark still truly cared about them and would offer his help to them when needed, albeit grumbling all the way. Rom and Nog did the same for him, helping Quark out with favors when they could.

Odo, the constable of DS9, had a love/hate relationship with Quark. They were in constant competition as Quark tried to carry out various profitable but illegal schemes and Odo tried to stop him. At the same time, they respected one another and over the years developed a strong friendship, though it was one they hated to admit to themselves, much less anyone else.

In later years the two would even seek each other out to get or offer advice in tough times.

Despite his blatantly sexist and avaricious ways, Quark could be surprisingly charming. He’d sometimes get interest from women who should have been smart enough to know better.

At the same time, Quark would meet such opportunities with a surprising amount of sensitivity by his standards and would even engage in philanthropic acts. That generosity was certainly motivated in part by his desire to impress said ladies (who were often engaged in some sort of aid or relief work). But it also seemed that he was inspired by their attention to be a better person.

Though a somewhat comic figure in his pursuit of his desires, Quark had a knack for innovation at times. He was always looking for new ways to advertise and market himself and his services, like hacking DS9’s comm system to play a commercial for his bar every time someone opened an interface.

He was also capable of arguing rather persuasively on issues close to his heart. He even managed to out-logic a Vulcan terrorist on one occasion, convincing her to cooperate with the authorities by drawing comparisons between efficient commerce and effective political action.

Because he took great pride in his reputation as a conman and outlaw, Quark took great offense to having his skills in illicit dealings and mendacity questioned.

Quark was a bit of a whiner and a coward, complaining about any discomforts, shying away from confrontation whenever possible, and often greeting the threat of imminent death with screams and flailing. He recovered quickly though and could even face down dire threats with only a little flinching if given some time to compose himself.

Quark: “I have nothing to hide. I’m selling quality merchandise to select clientele.”
Odo: “And what makes them so select?”
Quark: “They’re all ridiculously wealthy, and not too bright.”

(Outraged after reading Odo’s file on him): “‘A self-important con artist who’s nowhere near as clever as he thinks he is’ ? That’s your offical security evaluation of me ?”

“You know, Commander, I think I’ve figured out why humans don’t like Ferengi. The way I see it, humans used to be a lot like Ferengi : greedy, acquisitive, interested only in profit. We’re a constant reminder of a part of your past you’d like to forget. But you’re overlooking something. Humans used to be a lot worse than the Ferengi. Slavery, concentration camps, interstellar wars – we have nothing in our past that approaches that kind of barbarism. You see ? We’re nothing like you. We’re *better*.”

“I have a dream – a dream that one day all people – humans, Jem’Hadar, Ferengi, Cardassians – will stand together in peace around my Dabo tables.”

Like any other Star Trek character, Quark could be met in his native environment by people traveling through Hypertime . The X-Men have already met the crew of the Enterprise on occasion through this method.

Alternatively, Quark could appear as a bar owner in some off-world tavern. Or even come to Earth seeking business deals in competition with the likes of interplanetary businessmen such as Manga Khan.

Quark also somewhat resembles, personality-wise, many of DC’s newly-capitalist characters. He might, rather than being an alien, just be a recent immigrant from an Eastern European nation that has tried to accelerate its conversion to pure capitalism.

Quark might settle in as the local barkeep, informant, and fixer. Part of some hero’s supporting cast, but always a bit close to being a villain. Barter (from the Hawk & Dove series) with a sense of humor, if you will.

Note:
Attractive does not represent physical beauty in this case, but rather Quark’s unusual charm with women.-

Note:
The local underworld Connection includes a fairly wide range of illicit groups operating in Bajoran and Cardassian space, particularly smugglers of various goods and resistance groups.
This won’t include most terrorist and arms-smuggling groups, which Quark avoids like the plague for both practical and moral reasons if he knows about their activities. Getting a Connection with those more violent groups would require Quark to use his Omni-Connection.

Drawbacks:
Miscellaneous (Sensitive ears: -1CS to Quark’s OV and +1 CS to the OV of all of his actions in very noisy environments), MIA (attractive women), SIA (Making a profit), SIA (upholding Ferengi ideals as they existed prior to the 2375 Reform; this was later lowered to an MIA).

Note:
Though Quark’s appearance is not remarkable to most spacefaring cultures, he would suffer the Distinct Appearance Drawback in cultures unused to aliens.

Equipment:
Nothing standard. Though he had some miscellaneous computer keycards and lock picks that he would use in special circumstances. Quark would supplement his computer hacking and information gathering attempts with a set of isolinear rods. These gave him password and access equivalent to someone with High Credentials among various Cardassian agencies (and presumably other local groups).

These Credentials have the equivalent of an R# of 5. Rolling the R# while using the Credentials means that they’re outdated or have been detected as forgeries, rendering them useless for the rest of the adventure. It can be assumed that Quark will get new Credentials between scenarios to replace those that have failed an R# check.

Quark had a phaser pistol in the lockbox of his bar, but the one time he needed it he opened the lockbox only to discover that his brother Rom had borrowed some essential parts. Rom left a useless gun and a note that it would be fixed next week.

The rims of Quark’s ears, like those of every Ferengi, are an erogenous zone and very sensitive to touch. A woman who strokes Quark’s lobes — a massage known as oo-mox in Ferengi — or anyone applying a tight grip to said body parts will get a -1CS Bonus to the OV/RV of any Character Interaction attempts.

Knowledge of this Ferengi trait is fairly common, so anyone who has associated with Ferengi for a while or who has a Familiarity/Expertise/Scholar with them will know about it. 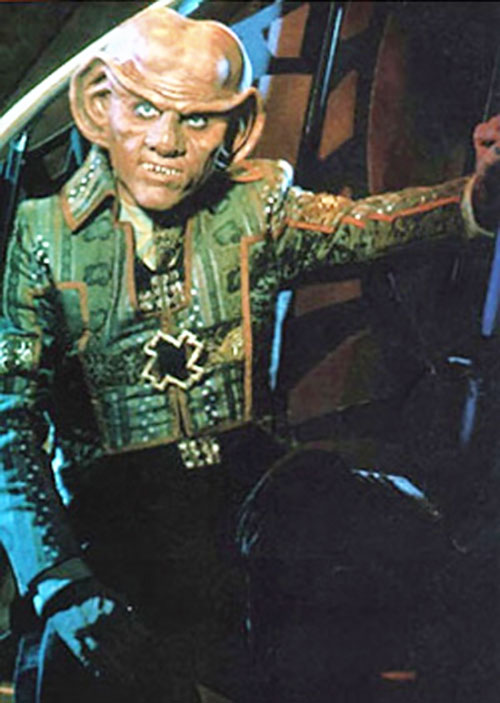 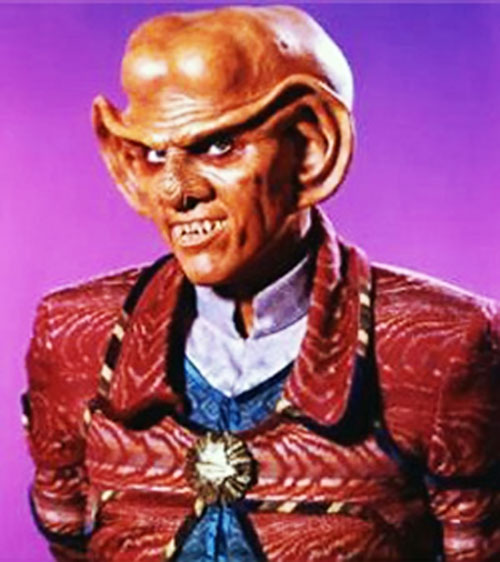