Starman is a living fusion reactor.

He is super-dense and therefore superhumanly heavy and resistant to damage. He can endure superhuman blows and gunfire, though the latter still can cause him pain.

He can fly at supersonic speeds.

The Power of a Star in Human Form

Starman initially relies on jets of fire as his main attack power (and has some difficulty controlling it, as noted in the game stats). But as he goes on, he actually seems to develop a more focussed energy projection power. It was never revealed precisely what that energy was.

However, the Power Elite, who supposedly had all of Starman’s powers, displayed various energy projection powers. These included superheated plasma bolts, heat, gravitic pulses, and light energy focussed as a laser beam.

It is likely that Starman could have developed all these abilities over time. But at this point in his all too short career, his energy projection power should be considered “stellar energy”.

During a scientific test, Starman used his powers to project intense heat only in an attempt to melt an experimental heat shield material. He did this on only one occasion, so in DC Heroes terms it was likely he was attempting a Trick Power use. It would be possible for Staman to use Trick Powers to simulate the other forms of Energy Projection.

If, for example, a player wishes to use Laser Beam specifically, he should do so as a Trick Power or actually purchase the Power. Starman should be able to Trick Power virtually any form of EM energy that can be rationalized as “stellar energy”.

While hiking in the Rockies, Will Payton was struck by a bolt of energy from space. He thus was given the power of a human-shaped star, powered by an internal fusion reaction.

Starman operated primarily in the American Southwest. Still, he managed to encounter with many of DC’s heavy hitters, including Green Lantern, Superman, Batman, Firestorm, the Atom, and Power Girl.

Mostly, though, he kept to his own area and fought his own villains. 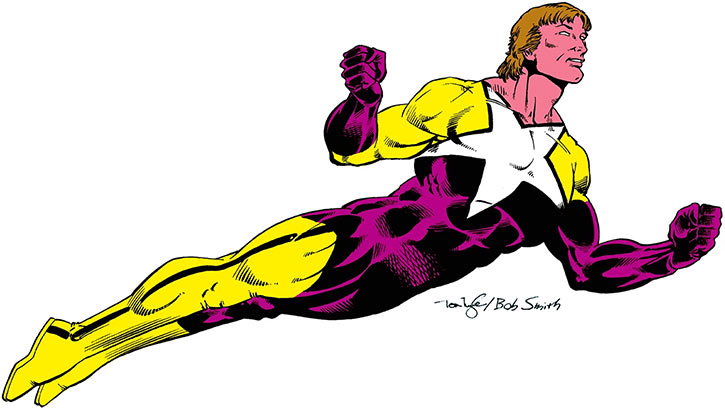 Starman eventually tracked down the source of his power, a highly conservative think-tank of scientists. Their goal was to create powered individuals to take the place of the “liberal” Justice-Leaguers and others who did not have their political views.

Their second-string group, the Power Elite, attempted to kill Starman and recover his power for themselves. Starman defeated them on several occasions, The last time wiping out their base and depriving them of their support network.

Dr. Melrose, head of the Power Elite, hired the assassin Deadline to go after Starman. This culminated in a climactic battle where Deadline tore open Starman’s nearly impervious body and released the fusion energy within. That was pretty much the end of issue #25.

Starman seemingly died fighting the supervillain Eclipso. The 1990s Starman series revealed that his fate was different from previously believed. The source of Will’s powers was revealed to be the essence of the previous Starman, Prince Gavyn of Throneworld, infusing Will’s body with cosmic energy.

The two are now fused together, with Gavyn operating in Will’s body and with his memories. It is unclear if the real Will even survived past his own origin.

However, it is possible that, given Gavyn’s enormous cosmic powers, Will Payton could become a separate individual someday.

Will Payton sports longish brown hair and light blue eyes that seem to change shades dependent on his mood.

He is handsome in a slightly rugged way, and has the deep tan of an experienced and dedicated outdoors person. He has occasionally sported a beard and moustache.

When being “outdoorsy” he tends to look and dress like the Marlboro Man.

As Starman, Will looks taller and heavier than his “normal” persona. He also has a squarer chin and broader cheekbones, darker brown hair and glowing amber eyes with no pupils. His skin has a golden tone, and he has heavier, more defined musculature.

The semi-metamorphic  Will actually *chooses* to look as he does, and it’s likely that his Starman persona is a reflection of what Will thinks a superhero should look like.

His original costume was a hideous purple and yellow affair (that oddly enough, worked anyway) with a large white star over the chest. His second outfit, provided by Kitty Faulkner and STAR Labs Phoenix, was black and red with the same white star. The purple and yellow was better.

Will Payton is dedicated and idealistic. However, he is also prone to be plagued with self-doubt and insecurities. He’s a complete everyman, with family and job problems in addition to his superheroic ones.

He worries over the fact he may no longer be anything even vaguely resembling human, but he’s also still human enough to kick back and have a brew with a friend. He’s compassionate, and works hard to bring his vision of justice to his small corner of the world.

(His first opponent empties an Uzi into his face)
“OW. That HURT !”

(Having just helped Green Lantern and Atom repair the Sydney Opera House)
Starman: “See you later, Lantern !… Omigosh… I just called him ‘Lantern’. Was that okay ?”
Atom: “Better than calling him ‘Green’.”

“Just tell my folks I’m Staman, you said. They’ll UNDERSTAND, you said. Well, my mother just found out and she kicked me out of the house !!”

(About to destroy Eclipso) “I don’t know if you can hear me, Eclipso, but there is something I know, YOU WILL NEVER FORGET ME !” 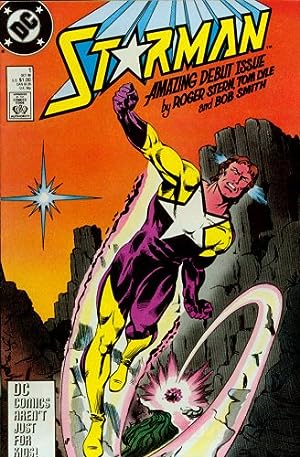 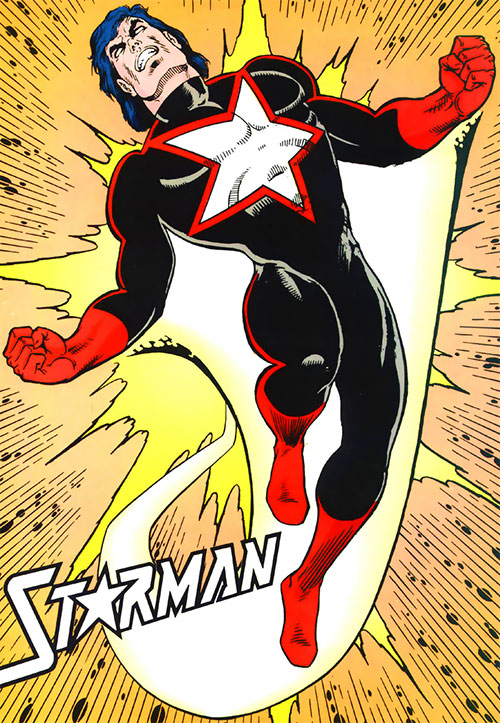