Starshrike can beat her wings to fly at high speeds.

She also can emit a powerful sonic beam by screaming.

Starshrike is the successor of Shrike among the Cadre.

As discussed in the main Cadre article, our hypothesis is that the Cadre recovered Shrike’s bracers after her death during a Suicide Squad mission. They then gave them to a new recruit, granting her the same powers and physical alterations.

Unlike the successors of the original Shatterfist and Fastball, Starshrike adopted a slightly different name than her bracers’ previous owner. 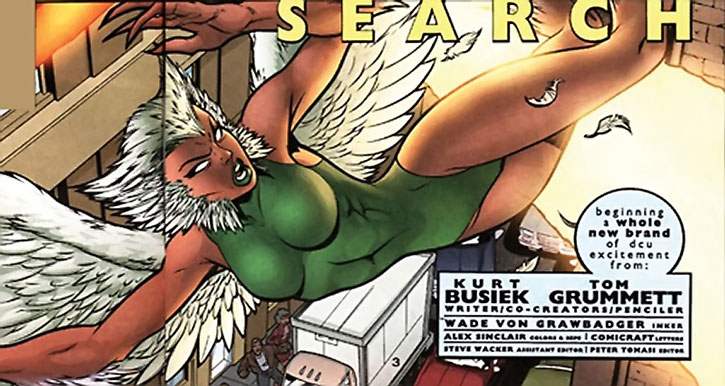 She was first seen when the Cadre worked for Doctor Polaris, then betrayed him when they realised what his plan was.

Starshrike was also seen hanging around a bar for alien bounty hunters. Presumably she and other Cadre members present were looking for work.

When the US government started kidnapping super-criminals, Starshrike was among the motley crew that sought sanctuary with the Justice League. She thus apparently avoided being deported to an alien planet.

When Libra created the Society — a grand alliance of super-criminals with mystical overtones — Starshrike was among the first wave of recruits, perhaps for protection.

A character named Peregrine, identical to Shrike and Starshrike, appeared in 2007. Who she is is unclear. It might be :

Peregrine had been a victim of a criminal surgery ring forcibly removing organs from superhumans and grafting them into clients. She had been captured and her wings amputated. Peregrine was treated in a STAR Lab medical unit headed by Dr. Jenet Klyburn. Peregrine was suffering from severe phantom limbs issues, making her violent.

Klyburn, who was treating other victims of the organs thieves, worked with Dr. Mid-Nite (Dr. Pieter Cross) who dismantled the criminal ring. Peregrine’s wings had been sold to a fashion model named Angelika. Like most sold organs, the wings were causing Angelika severe health issues. They were likely to kill her through either tissue rejection or immunosuppressant abuse.

What happened after the organ-legging ring was taken down is unrevealed. Dr. Klyburn and Dr. Mid-Nite presumably had Angelika’s stolen wings removed to save her life, and grafted back onto Peregrine.

During the Trinity events, the DC Universe experienced complex reality shifts. Early on a mobilisation of superhuman defenders took place in the US after Europe vanished behind a magical force field. Starshrike publicly joined the effort, patrolling the skies and coasts.

Starshrike was not seen since, including in Cadre appearances. Thus, it is possible that she reformed after the Trinity crisis. Perhaps Dr. Mid-Nite’s efforts to save her inspired her.

The stuff on Starshrike’s head is sometimes depicted as feathers and sometimes as hair, and their colour varies. Perhaps she has learned to alter her physical mutations using the bracers because she doesn’t want to look too much like her predecessor. She was once depicted wearing Shrike III’s costume, which we assume was a continuity mistake.

Starshrike comes across as a serious and realistic professional. She knows when a battle is turning south and when to retreat, and she does her homework before an operation.

In fact she seems way more sensible, reasonable and intelligent than the rest of the Cadre. Thus, she may well have decided to drop them and do her own thing.

During the “Peregrine” appearance, several new abilities were demonstrated or mentioned. There’s no reason to assume that Shrike and Starshrike lack similar abilities.

* While in the air. May receive further bonuses from Favoured Environment

During the “Peregrine” appearance, several new abilities were demonstrated or mentioned. There’s no reason to assume that Shrike and Starshrike lack similar abilities. 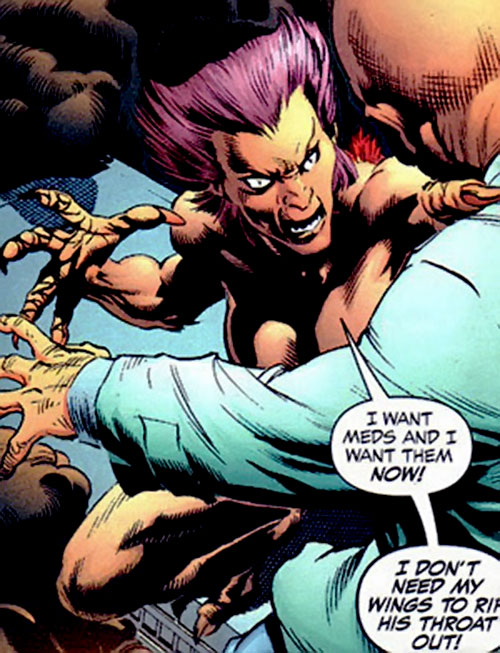