Static’s powers are electromagnetic in nature. They allow him to both generate/absorb electrical energy and levitate magnetic objects.

He also seems to be able to move around people. In DC Heroes RPG terms, this falls under Telekinesis since most people aren’t that magnetic.

Static can also stick people or objects against a wall with static cling.

Virgil Hawkins gained his powers in the Big Bang, a huge fight between members of Dakota’s street gangs. While not a gang banger himself, Virgil had been tormented at school by a bully. The leader of another gang offered Virgil a chance for revenge during the Big Bang : he gave him a gun to kill his tormentor. At the Big Bang, however, Virgil chose not to use the gun.

As the fight began, police moved in. A stray shot opened canisters of a mysterious gas which were stored on the docks. This strange gas had apparently been planted by wealthy industrialist Edwin Alva. It caused strange mutations in a number of the gang members. These became known as Bang Babies.

Virgil passed out from the gas and awoke at home. He soon discovered that he’d been granted electrical and magnetic powers. He told his friend Richie, a fellow comic book geek, about his new abilities. They agreed it was natural for him to become Dakota’s newest superhero.

Virgil has black hair in somewhat messy locs. He tends to dress in casual, colorful clothing.

As Static, he wears black pants, athletic shoes, a white t-shirt with a lightning bolt crossing a circle, a white partial face mask, yellow goggles (normally worn on his forehead), and a long blue jacket lined with yellow.

His powers have a light violet or light blue signature.

Virgil has a self-deprecating sense of humor. He often uses it to disarm bullies and others who mean him harm. His friendly, easygoing demeanor attracts a diverse array of friends. He’s whip-smart, excelling in his studies, especially science.

Virgil has great affection for his most immediate role model, his no-nonsense father, Robert. He is still adjusting to the death of hiss mother, Jean. Mrs. Hawkins was killed while performing her duties as a paramedic during a gang fight three years ago.

Virgil has a running verbal battle going with older sister Sharon, a college freshman who gives as good as she gets in the insult department.

Rebirth of the cool

Static’s personality is Virgil’s, with the volume way, WAY up. With all the phat stuff he can do, Static is having a ball being a superhero. But more importantly, he gets just as much out of selflessly helping people and making Dakota a better place.

And for Virgil, there’s yet another positive side effect to being Static : he has tons more confidence in his civilian identity than ever !

Simply put, he’s a hero — in and out of costume.

In the DC Universe, Static would fit in well with Young Justice. Plus, as of this writing they look kinda pale…

Helper(s): Much of the descriptive text was taken from a defunct Warner Bros web page. 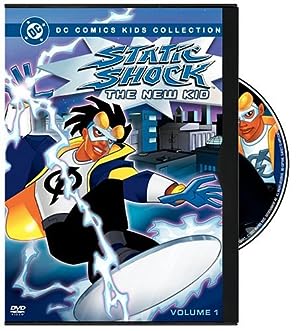