Steel Scarab only appeared in 2002, in the first Stormwatch: Team Achilles storyline.

He’s a mercenary piloting what seems to be an evil version of the Blue Beetle (Ted Kord)’s “Bug” aircraft.

The Steel Scarab is an hardened mercenary with an obvious military background.

He’s pretty smart and observant. He is experienced enough to be cynical about the conditions under which he fights, which keeps him wary.

His “bug” aircraft is highly maneuverable, and is bristling with cannons and sharp pincers. It also has numerous sensors, and has proven easily able to demolish four US jet fighters.

Apparently Steel Scarab’s preferred tactic for those situations is to dogfight very closely to his opponents, so they can’t help each other. He’ll then achieve kills using his aircraft’s clawed legs.

The Steel Scarab aircraft is bleeding edge technology, and incorporates the very latest from US armament and electronics companies. One can thus hypothesise that the Scarab often works for Baiul or similar employers, who pay a part of his fees in tech.

The Steel Scarab is a professional, experienced mercenary and seemed American. He operated along with the Serbian military during the civil war, and resurfaced some time later on Ivana Baiul’s payroll.

Baiul, at that point the director of a Homeland Security agency, manipulated a superhuman terrorist cell into attacking the UN. Her goals were both to raise her budget and to start counting coup against Ben Santini.

Santini, like Baiul, was a former top executive of the American covert agency International Operations. Both had viciously tried to get rid of each other a few times.

Baiul was also a part of factions in US administration who were extremely wary about the UN assembling a new StormWatch team. They tried to cripple the new agency before it could get off the ground.

The Steel Scarab was hired to coordinate the strike and provide air superiority and support. The operation went fine at first. The Steel Scarab’s cannons damaged the UN building and allowed the terrorist to assault the place while their he kept the NYPD pinned. The Steel Scarab also successfully engaged four jet fighters which were sent to knock him out of the sky.

Despite a complete lack of weaponry and facilities, Santini managed to have his head sniper and spotter procure armament. They tagged the Steel Scarab’s aircraft using a potent EMP  rifle. The Scarab’s aircraft crashed hard, and when he crawled out of it he was swiftly incapacitated by sniper fire.

The other terrorist who was covering the perimeter flew to his rescue when canisters of gas were shot at them. The crafty Steel Scarab realized those vapours were tear gas but part of an FAE (fuel-air explosive). But the terrorist had already started firing an energy blast which ignited the gas.

The aircraft survived both the crash and explosion, and Santini had it secured by his men. From the wreckage, it quickly became apparent that the Steel Scarab’s employer was Ivana Baiul.

A canny, grizzled veteran. He hates everybody, trusts no one and thinks everyone but him is an imbecile.

He’s quite observant, although a bit overconfident and tends to be slightly careless when he has a situation under control.

“This is Scarab. I think Santini is starting his party – I just told the crazy assholes inside the building. When can I pull out and leave those idiots behind ? ”

The Steel Scarab doesn’t get much screen time. But since he seems meant to be a guy with the evil version of Blue Beetle’s Bug, he’s rather easy to stat. 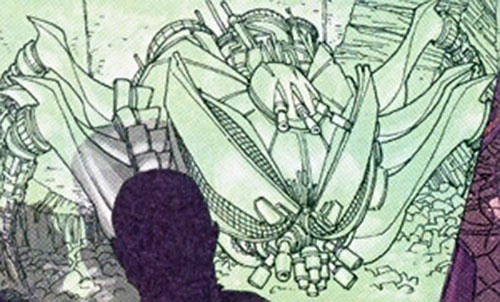