Steel Wind is a cyborg. It is unclear how much of her body has been reconstructed at this stage. But this includes at the very least the lower two-thirds of both arms. It is probable that her entire arms, shoulders and spinal column are cybernetics.

This grants her superhuman strength and durability, and formidable reflexes.

Steel Wind is a fantastic cyclist. She controls her special hog via cyberlink. Said motorcycle is heavily reinforced and armed, including :

All the weapons are cybernetically controlled. The bike also includes mini-rockets in a rear nacelle, to perform jumps.

As the stone-cold Steel Wind, she did not seem to retain her previous artistic abilities.

Steel Wind was once a Japanese painter, dedicated to capturing beauty’s essence on canvas. She seemed to be both independently wealthy and an eccentric.

During a pleasure cruise in the Caribbean, an explosion destroyed the yacht she was on. Somehow, she washed ashore still alive, but with most bones shattered and her arms mangled beyond repair.

The Freakmaster took her under his wing and had his surgeons rebuild her as a cyborg. She then pledged her life to the service of her savior, gradually tainting and numbing her soul.

Equipped with a special motorcycle, which she could pilot with the acumen of a champion stunt rider, she became the main agent of the Freakmaster.

In a carnival, of sights to see

Her modus operandi was to join carnivals as a stunt rider. She’d then shark a considerable loan to the owner, and use that leverage and sheer intimidation to take over.

Apparently, one goal of those missions was to make a bundle over a short time. She’d overwork the carnies into the ground, then leave with the accumulated money. But the main objective to free the employees of the freaks show so they could join the Freakmaster’s project.

Leaving behind her a trail of ruined carnivals, she eventually joined the Quentin carnival. She then took over by her usual means.

The wall of death !

She challenged the rebellious Johnny Blaze to take over his position of stunt cyclist. They were pitted in an obstacle race Steel Wind won when the demon within Blaze distracted him.

As Blaze left, the carnival’s magician, Lorenzo, inadvertently discovered Steel Wind’s cyborg nature. She beat him up and sent him to the Freakmaster, who mutated him.

Even without Blaze, the carnival attempted to rebel against the steel-fisted management of the Japanese biker. This rebellion would likely have been stomped into the ground had Blaze not intervened.

Steel Wind nearly burned Blaze to a crisp, forcing him to turn into the Ghost Rider (which he was trying to keep out of his life). She fled from the flaming demon, but he eventually managed to snatch victory. Though he had been dismounted and blown up with grenades, this wrecked her motorcycle.

As, in shock, Steel Wind reflected upon what she had become, she did not resist Ghost Rider’s hellfire. This burned her soul ; for a few moments she was blissfully reverted to her beauty-loving prior nature, then collapsed in pain and was left catatonic.

Her sister found her and sought a mean to return her to her senses. Eventually she allied with Reverend Styge and Centurious. The sister offered her soul and her body (getting turned into a cyborg herself) to have Steel Wind back.

The treatments, likely involving Zarathos’ magic, did bring Steel Wind back. Wind now operated along with her similar-looking sister, who named herself Steel Vengeance. Apparently, Steel Wind’s soul was taken by Centurious and Zarathos as well.

(We’ll assume here that her appearances in Captain America (the Superia cruise, a failed Scourge assassination attempt and a bar brawl to capture Asp and Black Mamba) were actually Steel Vengeance. This seems more coherent than the official version in the OHOTMU.)

Centurious then had them lead a repetitive and devastating series of attacks on Blaze’s carnival. Superhuman agents were necessaries, as the carnies were armed by their techno-wizard Eli McIntyre. The attacks, usually reinforced with the demons of Styge, killed several unimportant carnival members.

The first attack failed as Mephisto appeared and took Blaze and Ghost Rider. For this failure Centurious destroyed Steel Vengeance in front of her impassive sister.

The third attack occurred after Centurious and Lilith allied. Steel Wind assisted a group of Lilin trying to steal Ghost Rider’s medallion. They had to retreat when the more powerful Lilin, Outcast, was wounded.

Under unknown circumstances (likely a mission for her master Centurious), Steel Wind found herself with her limbs destroyed. She was thus captured by American civil servants. Wind was eventually transferred as a prisoner in a secret Army base in the Adirondack mountains. 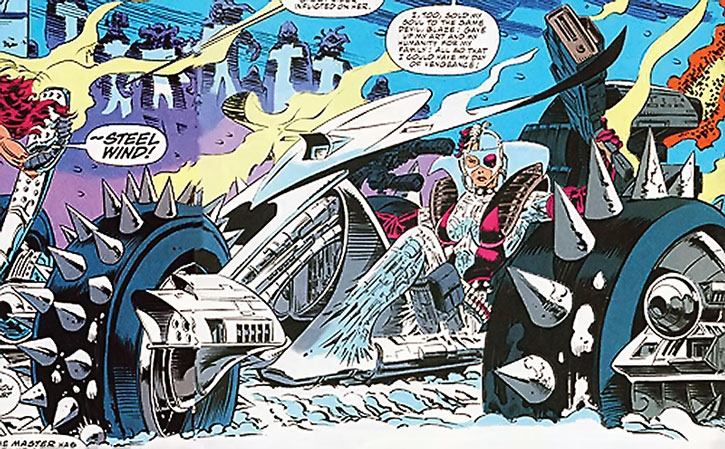 This base also kept numerous samples from carnies killed by the previous attacks. These had been dissected to analyze any superhuman and paranormal powers. It also held captured Styge demons.

Steel Wind, apparently free from Centurious’ domination, begged Blaze to kill her. She wanted him to end her curse and her spiritual corruption.

Blaze refused and took her limbless body to the Carnival. The carnies accepted her, realizing she was no longer in the thrall of Centurious, who at that point was believed destroyed.

Steel Wind was once again repaired, this time by Quinn McIntyre. Though she had murdered his father, McIntyre gave her all of her limbs back for unclear reasons.

After Blaze’s wife and kids disappeared due to the machinations of Centurious, Blaze threatened Steel Wind in a drunken stupor, assuming she was involved. He then left to kill Centurious. Learning from his ranting that her old master was alive, Wind followed Blaze on her trike.

The less-than-sober Blaze was easily captured and dragged in front of Centurious. But Steel Wind was not far behind and burst in on her hog. Centurious assumed she was still his servant and ordered her to kill the prone Blaze. However, she opened fire on Centurious instead, saving the former stunt rider.

Both fought Centurious, who collapsed a large section of wall on himself when he attempted to blast Steel Wind. Blaze prevented Steel Wind from gunning down Centurious, telling her to continue to try to regain her humanity. He executed Centurious after she left.

Her mechanical, cold behaviour and her icy eyes are downright chilling, and she often speaks in a whisper.

She controls her bike through cables extending from her palms.

Steel Wind appears cold, brutal, authoritative, stone-faced and practically emotions-less. She seems to be a stone-cold enforcer. Actually, she’s deeply conflicted between what she was and what she is — the beauty-loving artist turned inhuman legbreaker. 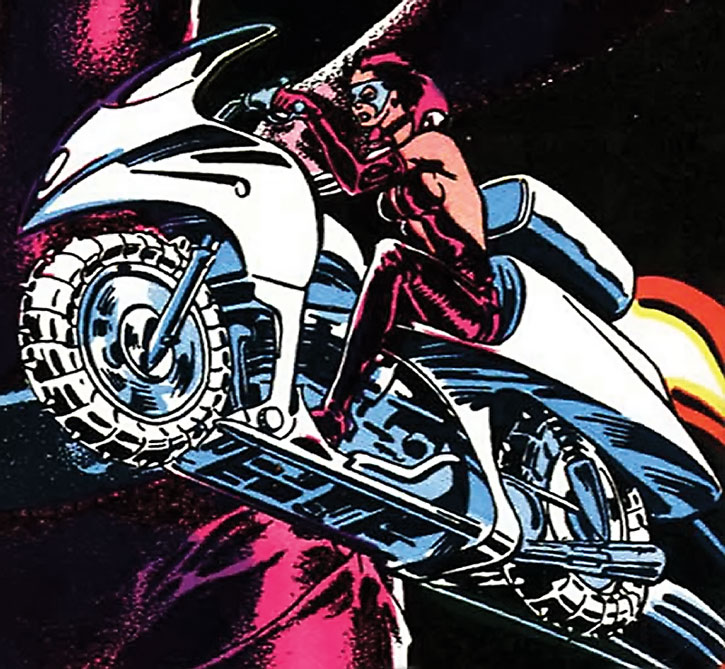 She will often briefly hesitate and evidence a rare glimpse of emotion when confronted with beauty. Wind will freeze and reflect upon her new nature and deeds when her psychological instability kicks in.

When she appeared again after her initial encounter with the Blaze Ghost Rider, she seemed out of it and largely impassive. Under the spell of Centurious, Steel Wind had been reduced to a two-dimensional character obsessed with vengeance against Blaze and Ghost Rider.

“The master will not be pleased by this show of weakness !”

“Beauty is transient, magician ! And only the most awful truths survive ! You would do well to learn that !”

“The time has come for Steel Wind to take command ! And before you fools voice your feeble protestations, remember that others have dared cross me in past days, and they paid a price so great it cannot be spoken !”

“Once I lived only for beauty, I was a fool ! The master has shown me that, in a world which permits such as we to exist, beauty is a lie, and only death has meaning !”

“Sister, I must have first blood.”

“I will not be denied my vengeance, Blaze. If I cannot have Ghost Rider, then I will have you, and all those you hold dear !”

“You brought this on yourself, Centurious. You did this to me as much as Zarathos did. Zarathos took my soul, but you took my humanity. And you killed my sister ! I was an artist… I saw beauty in all things… now all I can see is pain and despair. Now I will see you die !”

Equipment:
MOTORCYCLE [STR 06 BODY 09, Flame project: 07, Jumping: 01. Laser beam: 06, Running: 07, Superbreath: 08, Bonuses & Limitations: Flame Project has a Range of but 03, Superbreath can blow its targets upward as well as backward, Jumping is used to extend by one AP the normal distance the bike can jump, Note: the tyres are spiked and can retain a grip on ice, wet grass and the like].

After she was restored from her catatonic state, Steel Wind underwent the following changes:

She was briefly given a magical artefact. It was a pendant that allowed her to command Styge’s demons.

Amuulet [BODY 14, Energy blast: 11, Split: 04, Bonuses& Limitations: Energy Blast is its own AV (+0 or +1 depending on house rules), but only against supernatural creatures ; Split does not consume any Action and the first AP can be used on every present Styge demon.

However, the APs above 1 can only be used on demons that are currently Stunned, and only to add a single AP of Split during that Stun (a demon stunned a second time will be able to receive a third AP, etc.)]. 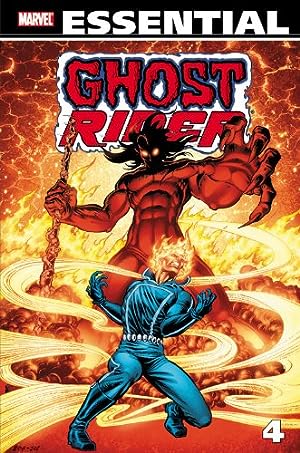 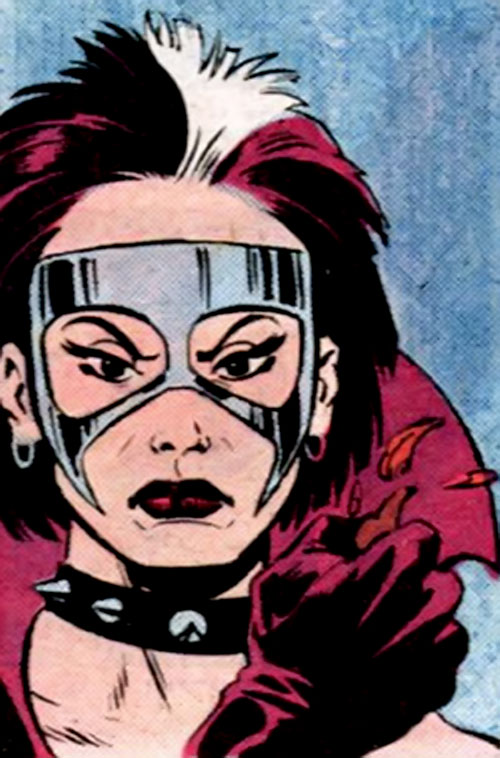 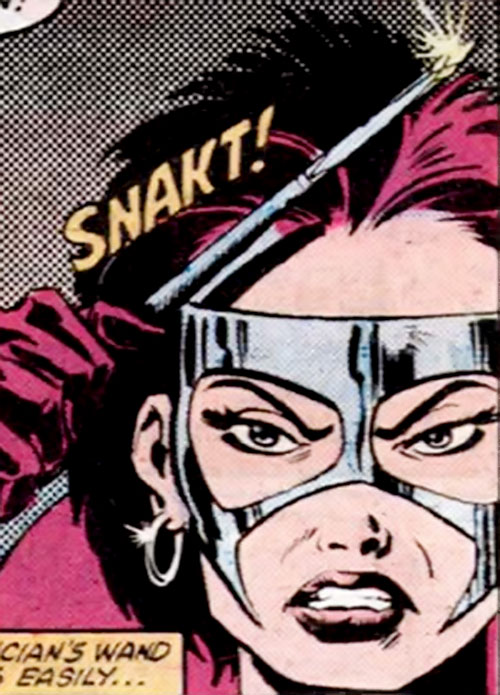 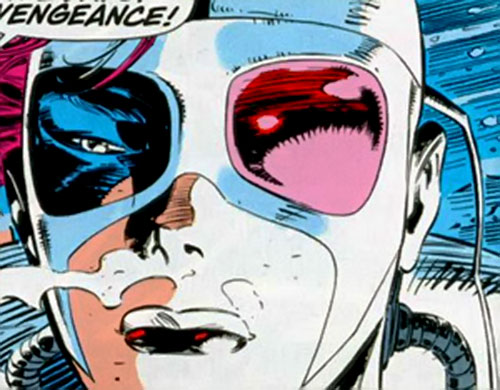