Steeljack is superhumanly strong and durable (“Class 50”) – his skin and muscle being made of a steel-like material. He’s bulletproof, and can blow a large hole through a brick wall with one punch.

In his prime he could wreck a bank vault — 6 inches of titanium-steel — though it wasn’t easy and took time. He can walk across the hottest natural fires and land from any fall without breaking stride.

Steeljack keeps himself in solid shape for a man of his age, and remains a good hand-to-hand fighter.

Intellectually, he’s just an ordinary Joe who didn’t even get to finish high school. His life experience is almost entirely about being muscle – or a convict. He’s also worn by age and guilt, and has little energy for living.

On the other hand, if his back is to the wall, he might use some rusty, old skills and contacts to surprising effect. He wasn’t a major villain, but he was fairly good and respected.

Steeljack is well-connected with the Kiefer Square locals – whence dozens of C-list and D-list super-villains arose. Though most of them had short careers, that’s a lot of people with minor powers (or, more commonly, special technology) in the area, and they stick together when they feel threatened.

Steeljack is easy to underestimate, since he hasn’t been active for 20 years, usually fought major heroes and has a mopey loser vibe. Even MPH grossly underestimated his fighting prowess, and the Honor Guard then went on to further underestimate his strength and durability.

Donewicz is probably ferromagnetic, though that wasn’t demonstrated in the story.

Carl Donewicz was born circa 1950 in Kiefer Square, a slum in Astro City. Kiefer was the equivalent of Astro City’s Bakerville ghetto, but for White folks. It was a battered, violent neighbourhood with no jobs and few prospects.

Those who couldn’t get out of the Square would almost inevitably enter the one local industry — crime.

As a kid, Carl joined the Skullcrusher street gang for protection. However, his life’s goal was to be successful in school so he could move out of the Square, or perhaps even get into college and afford a new apartment for his mother.

When Donewicz was about 16 or 17, a gang brawl got bad. He lost his switchblade, picked up a revolver to defend himself, and shot one of his opponents dead. Though the police didn’t find out that it was him, being a murderer morally broke Donewicz and ended his dreams.

Donewicz became a young career criminal, but soon heard about one Dr. Ganss, who was looking to create superhuman enforcers. Carl’s physiology was right, and he was turned into the Steel-Jacketed Man.

Relishing in his strength and invulnerability, he worked as a super-villain to pay Ganss. He also had to repay Donnelly Ferguson, Kiefer Square’s underworld fixer, who had arranged for the deal. Donewicz wasn’t the only one in this case – through Ferguson, dozens of toughs from the Square area became minor super-villains.

Back during the 1970s, the Steel-Jacketed Man was a B-list villain, fighting big-name heroes such as Cleopatra (Sarah Brandeis’ predecessor, name unrevealed), Jack-in-the-Box (Jack Johnson), the N-Forcer and even the Silver Agent before his execution.

He, Cutlass and Quarrel (Doolittle Taggart) formed the Terrifying Three, but this villain team didn’t really work out. Still, the Steel-Jacketed Man was apparently one of the more successful Kiefer Square super-villains.

’till the pain is so big, you feel nothing at all

Donewicz was jailed several times starting in 1970, but like a good supervillain he kept escaping. However, in 1978 he ran out of steam and stayed in prison as he couldn’t stand being a criminal anymore.

He got out at the end of his sentence in 1998, after a relatively trouble-free 2 decades inside.

On top of all the usual problems for ex-cons, Steeljack was easy to recognise. And even 20 years later many people remembered his exploits. Even the most menial jobs didn’t work out.

Donewicz was eventually approached by his peers – mostly-retired criminals from Kiefer Square who had been “black masks” (super-villains) years ago. A serial killer was after them, and they wanted to hire Carl to investigate – reasoning that he had the best chance to survive stumbling upon the killer.

Steeljack looks just like a statue of living, stainless steel – though he’s not as heavy as a solid steel statue would be. He’s a tall man and still in good shape for his age (almost 50 during the Tarnished Angel story arc). His features are very reminiscent of Robert Mitchum ’s.

Back in his Steel-Jacketed Man days his costume was simply a black leotard. He hasn’t worn a costume since 1978, and is generally found in typical blue-collar American clothing – construction-style work shoes, dad jeans, old-fashioned flannel shirts, baseball caps, etc.

As a boy, Donewicz loved super-heroes and wanted to be one of them. He got part of his wish by being a super-villain, but eventually realised that it was counter-productive to his lifelong dream of actually making his life better and achieving something.

As all his attempts to improve his life failed, he grew bitter and cynical. But he still wanted to believe in super-heroes, since to his eyes they were the symbol that something better was possible.

By his late 40s, Steeljack was apathetic, and considered that his entire life had been but a big failure. The only thing that kept him moving was the simple necessity of getting money to survive, which inevitably took him toward shady pursuits.

Though he genuinely wanted to go straight, it was either being — at best — a gonif , or starving. His ambitions were modest, the big one being finding an unskilled but stable job so he could save up and replace his mother’s damaged gravestone. He may be clinically depressed, perhaps as a consequence of his lengthy prison sentence.

Donewicz sees himself as a dumbkopf and a loser, but his intelligence is actually average and he can get things done when he stops moping and feeling lost. Having been around the block once or twice, he knows that crime cannot pay for people like him. If only because he and the other Kiefer Square lifers do not have the faintest money-management skill.

As an ex-con, Carl prefers to have a well-established, dependable everyday routine. He also occasionally walks aimlessly around in the city, enjoying the simple fact that he can after 20 years in a cell.

“I won’t do anything illegal. You gotta know that. I need the work, but I don’t want to *do* that any more. If there’s any of *that* in this job…”

“I been runnin’ all my life now. And I’m still in the same place.”

“I ain’t here for trouble. I’m just lookin’ for a guy, is all. You ain’t none of you the original Irregulars — but I figured you might be in touch with the guy that founded the team, back in the seventies.”

“I’m just muscle and bulletproof skin — there’s nothing inside. No brains, no courage, nothing. I don’t even know what questions to ask, even if people’d listen to me.”

Drawbacks:
Creepy Appearance (metallic skin and hair), Guilt, Mistrust (ex-con, usual suspect on parole, famous ex-villain), Public ID, MPR (Steeljack is very heavy, though somehow that isn’t a problem when interacting with ordinary furniture. His skin and muscle being metallic can also be a minor hindrance – for instance it can rust, it’s slippery when wet, it easily loses heat, etc.).

The Hero Points are a typical amount. During the Tarnished Angel storyline Steeljack gains a significant number of HPs beyond those, though he doesn’t use them (aside from Guilt fees) before the very end — where he spends everything he has.

His Toughness is counted as a 12 for PL calculations. During the stories Carlie earns a bunch of Hero Points, but he doesn’t spend them until the last issue. 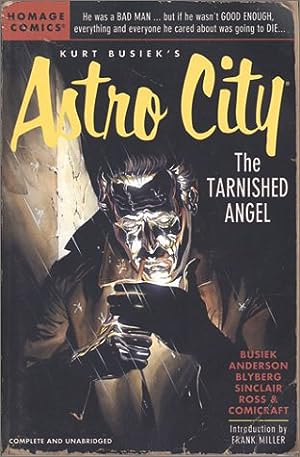 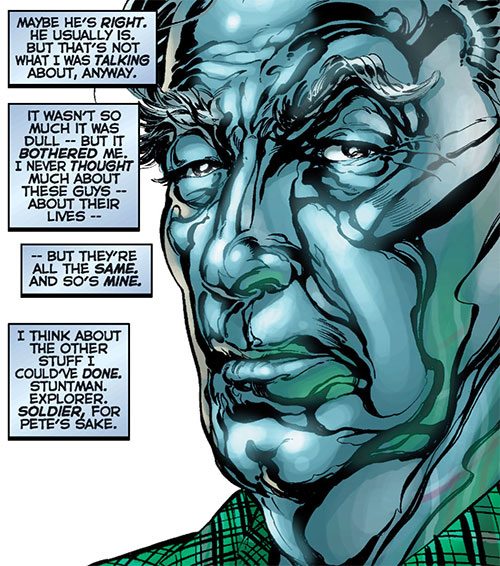 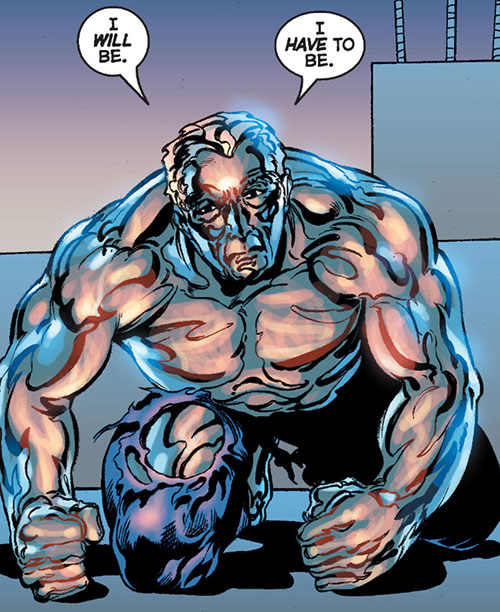 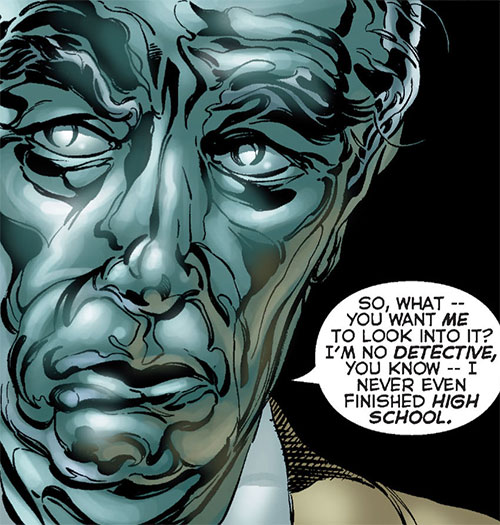 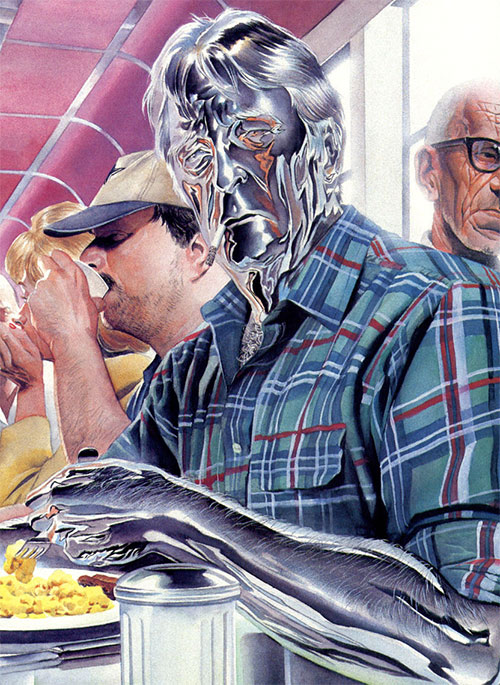 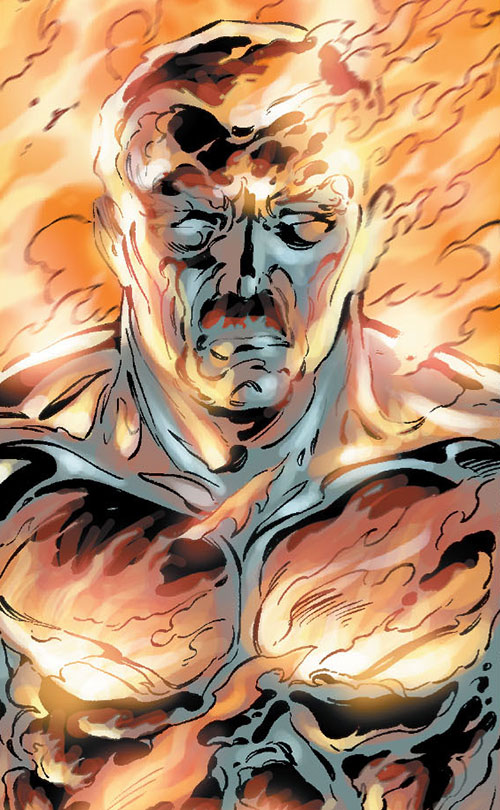 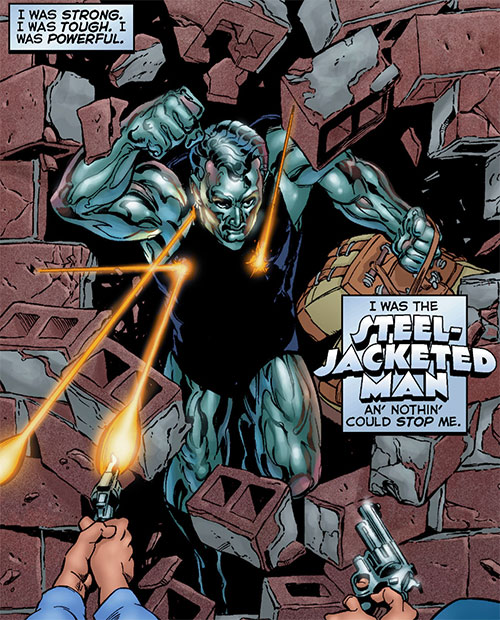