So yeah, he’s not the most unforgettable of Carol’s foes. But one might wonder what he and his gear have been up to since.

For ESL speakers, a steeplejack is “a person who climbs tall structures such as chimneys and steeples in order to carry out repairs” (New Oxford ).

Plumm had no special abilities. But he was quite proficient with his unique weapons, and performed strangely well against Ms. Marvel.

In DC Heroes RPG terms, Plumm had a surprising amount of Hero Points . He often augments his Weaponry AV and/or EV, and leverages the /BODY/ of the costume to LDD.

Maxwell Plumm was a crooked entrepreneur, with significant mob debt. He seemed to chiefly work construction in Boston and New York City. Plumm had an habit of discreetly cutting corners and playing fast and loose with regulations so as to repay his loans. Furthermore, one suspects that he laundered mob money.

Predictably, he did not always manage to dodge trouble.

The first documented such crisis was when a man named Jake Mallard, aka Steeplejack, accused Plumm of having caused the death of his two brothers. Mallard credibly blamed Plumm for scrimping on security measures on a high steel project. The masked Steeplejack, wielding a weapon of his own design, twice attempted to kill Plumm to obtain vengeance.

The entrepreneur was saved by Power Man (Luke Cage), who just happened to pass by. Plumm then hired Cage to become his bodyguard. During the second attack, Steeplejack was accidentally killed while fighting Power Man.

Plummthen designed the identity of the second Steeplejack. As a cover, he spread rumours that Jake Mallard was not dead and was still active as Steeplejack. This was made possible by the costume he wore, which covered him entirely and made him look as big as Mallard. 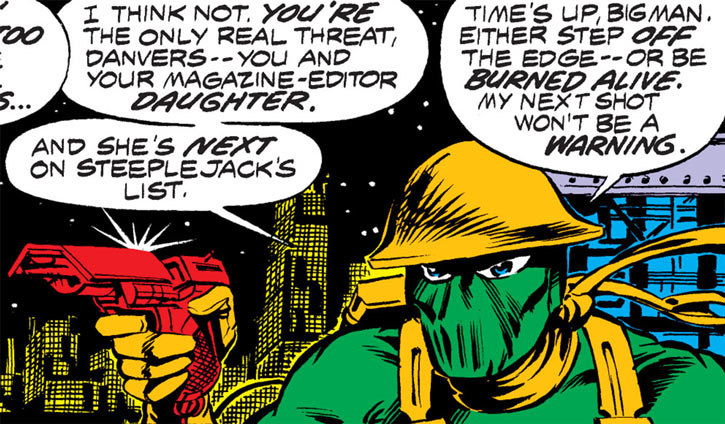 Plumm’s plan did not go very far. During a Boston construction project, contractor Joe Danvers got incensed that the building codes were not respected. Danvers got into a shouting match with Plumm.

As Steeplejack, Plumm captured Danvers. He planned on executing him so he could not become a whistle-blower. Danvers was saved in the nick of time by the costumed adventurer Ms. Marvel, secretly his daughter.

Plumm continued to be active as Steeplejack II. This may have been in addition to his usual activities, or as a full-time supervillain.

It is as Steeplejack that he attended a meeting at the Bar With No Name to discuss the matter of the Scourge of the Underworld. However, this turned out to be an ambush. Steeplejack, like almost all participants, was shot dead by the Scourge.

The costume seemed to make him look considerably taller. And it definitely made him look much larger and buffer.

Like most of his ilk Plumm seemed respectable and professional, yet had a vague, hard-to-pin shady vibe. He seemed to be prideful, living the good life and pretending that he had no debt problem or mob connections. But he reacted in a violent and underhanded way whenever he felt that he could crush the opposition and get away with murder.

As often happens, wearing a special costume and wielding a super-weapon made him uninhibited. He seemed somewhat intoxicated by a feeling of power and impunity.

“We’re within the building codes.”

“I’m sorry it had to come to this, Danvers, but you were warned to lay off.”

“So now I’m a killer. I suppose it had to happen, sooner or later.” 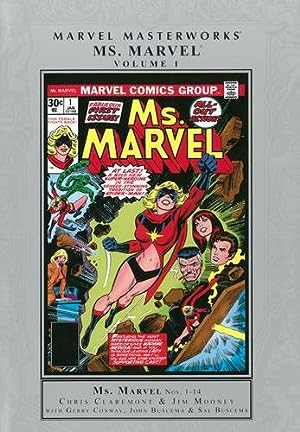 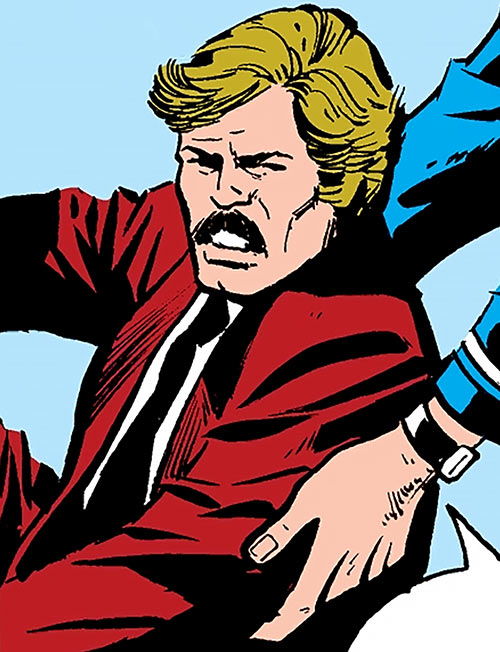