Stegron the Dinosaur Man is a powerful hybrid between a brontosaur and a man. He has superhuman speed, strength and endurance along with a powerful tail. His powerful body is also equipped with claws and he’s superhumanly nimble.

As is common for reptiles, Stegron’s metabolism is slowed by cold. Low temperatures will weaken him. In severe cold his body will, even he resists, shut itself down and go into a an hibernating state until he can thaw up again. He can stay in this state for months without harm.

Stegron also retains his scientific and technical knowledge, including his expertise in biology and dinosaurs. He uses this knowledge to create powerful equipment capable of resurrecting dinosaurs, and similar feats.

Stegron’s metamorphosis has also apparently given him the ability for limited mental control over and communication with dinosaurs.

Dr. Vincent Stegron used to be the co-worker of Dr. Kurt Connors alias the Lizard. The were both performing experiments concerning cellular regeneration on samples gained by Ka-Zar.

One day Stegron took some cellular samples and traveled to the Savage Land  himself. Stegron was apparently of the belief that if lizard cells could turn Connors into the Lizard then dinosaur cells could turn a man into a dinosaur-man.

When this became known to Connors, he promptly contacted Spider-Man and asked him to track Stegron down and watch him. Spider-Man agreed to help and traveled to the Savage Land and quite soon met Ka-Zar himself. While they were talking about the situation, several Swamp Men attacked them and by sheer numbers defeated them both.

Spider-Man and Ka-Zar woke up before a transformed Dr. Stegron, who now called himself Stegron the Dinosaur Man. After gloating before the two heroes about his plans to conquer the world, he left both captives.

The two heroes escaped captivity and tracked Stegron to his flying Ark creation. There Stegron was filling the Ark with dinosaurs. When Spider-Man and Ka-Zar were spotted he sent a bunch of dinosaurs to crush them. Stegron left the fight by flying his vehicle, but unbeknownst to him Spider-Man had snuck aboard. 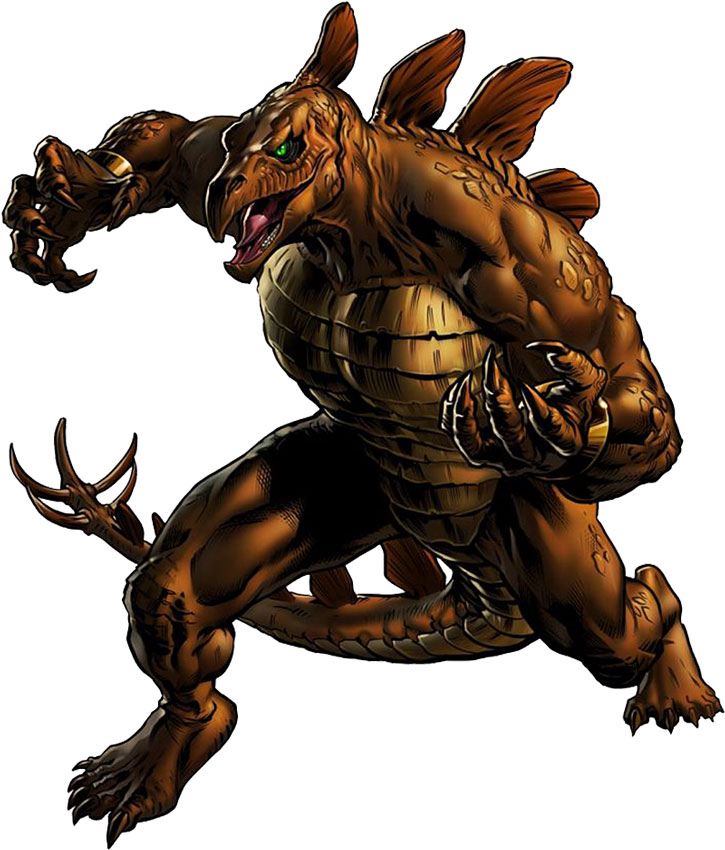 Later, on the main deck when the ship was approaching New York, and where Stegron was standing in contemplation, Spider-Man tried to ambush Stegron in order to stop him. They had a short fight, and Stegron managed to club Spider-Man into unconsciousness using his large tail. Spidey was thereafter thrown overboard to fall to his death in the sea below.

Meanwhile, the Black Panther had spotted the ship in the Avengers H.Q. and went there himself to investigate. He was just in time to see Spider-Man being thrown out and managed to save his life by capturing him.

Stegron landed the Ark in New York and unloaded his army of dinosaurs, beginning his conquest of the Earth. Stegron was riding through Times Square when Spider-Man and the Black Panther joined the fight. Spidey fought the dinosaurs and Black Panther sparred with Stegron, who was unable to hit Panther.

Dr. Connors, who’d been studying the serum Stegron had used for his transformation, then arrived. He told Stegron that the transformation was permanent. Stegron snapped and decided to flee to think the situation over. Spider-Man then managed to attack Stegron and punch him into the ocean. Unfortunately for Stegron, he was too heavy to swim and quickly sank beneath the waves.

Return of the orange reptile

Years later, Stegron again resurfaced in the home of Dr. Kurt Connors. He captured Connors’ son Billy and gave Connors an ultimatum. He had to build the gadgets whose drawings he had left in Connors’ lab in 48 hours, or Billy would die.

Meanwhile, Stegron broke into the Museum of Natural History . There, he resurrected some dinosaurs with, obviously, his reptile resurrector beam weapon. He then used another gadget, a controller box, to augment his powers so that the newly resurrected dinosaurs would go outside.

Spider-Man happened to be in the vicinity and intervened. Spider-Man appeared to have the upper hand in the fight, but Stegron managed to escape Spider-Man by hitting a wall of the museum with his tail. This buried Spider-Man under rubble.

Meanwhile, Dr. Connors was working hard in his lab to build Stegron’s equipment. But apparently he worked too hard since he changed into the Lizard. Spider-Man planned to contact Connors in order to ask him about clues to Stegron’s whereabouts, but met the Lizard instead.

After a brief fight the Lizard fled away into the sewer system to look for Stegron. Stegron had just used a retro-generation beam on his dinosaurs in order to enhance them when Lizard found him.

Meanwhile, Spider-Man was swinging around looking for clues. Thus, he found Stegron’s dinosaurs running rampant in the vicinity of Stegron’s H.Q.. Spidey then quickly found Stegron and Lizard fighting each other, but upon getting there both of them instead turned their anger on Spider-Man. 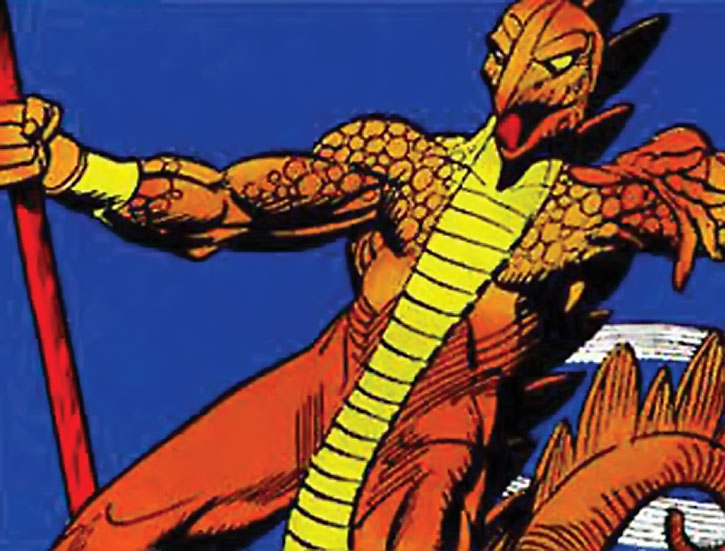 Spidey managed to change the Lizard back into Connors by making him swallow some antidote. But he was then clubbed down by Stegron, who managed to escape again. Stegron took Billy with him as hostage and rode away with his dinosaurs.

Soon enough, Spidey and Connors tracked them down. Spidey took Billy and Connors used the retro-generator to un-animate the dinosaurs, who collapsed into piles of bones. Stegron quickly ran away into the cold winter weather and attempted to ambush the following Spider-Man beneath a bridge.

Unfortunately for him, the cold weakened him severely and he tripped down throw the surface of the frozen river.

Spidey never saw the fall. He assumed that Stegron had gotten away and mysteriously disappeared. Considering Stegron’s ability to go into an involuntary suspension in cold, he will, without doubt be seen again when he’s thawed up again.

Stegron appears as a big, strange, orange-skinned, yellow spotted, naked and walking man-sized iguana. He has a huge, edged tail. His lizard head has a fused mouth and nose, making the nose pointy and the mouth big. When he speaks the long, pointy, red tongue is visible. He also apparently has no ears and his eyes look green (or red) and reptilian-like.

The tail is approx 7 feet in length and covered with orange, bony, scaly plates. These run all the way to the top of his head, over his spine and out over the entire tail to it’s edge (in fact, just like a Stegosaur). On both his feet and hands he has sharp claws.

Running from his throat over his chest to his abdomen are strange, yellow-black horizontal striped skin of approx 8 inches width. He also wears two metal arm bands in yellow.

All in all, Stegron looks like a horrible nightmare.

Stegron’s goal is to control the world and reinsert dinosaurs as the dominant species. To complete this goal he changed himself into the dinosaur-man voluntarily. Stegron actually sees reptiles and dinosaurs as his brothers. In his view he would lead his idealistic, conquered dinosaur world.

Not uncommon to megalomaniacal power mongers he sees himself as the rightful conqueror and ruler of Earth. He has even declared this his holy mission. He retains his scientific knowledge from his Dr. Vincent Stegron days and still uses science to further his ends.

Much like for the Lizard, Stegron’s reptilian brain is in control. Yet he has amazingly kept his scientific intellect.

Stegron has an extremely cocky attitude, and seems to have had so even as a human. He often speaks to himself about his plans and how he will rule mankind (he doesn’t mutter… he shouts!). He also has no patience.

Stegron, who speaks with long s-sounds, often intimidates opponents and promises to kill them if they disturb him. He’s very delusional and overconfident in combat. He’ll be extremely surprised if somebody manages to dodge out of the way of his tail striking.

Additionally, he tries to explain away anything that makes him look bad. For instance, being punched into the water would be explained by that he jumped into it. Opponents (who basically include everyone except reptiles and dinosaurs; the Lizard thus is a potential ally) will be viciously attacked and murdered by him or a member of his army.

His common modus operandi includes raising a powerful army of reptiles and dinosaurs (using his resurrection technology) and then simply lash out a full force attack against the civilization to be conquered, stampeding everything in sight.

“I have warned you Ssspider-man! Thisss time I’ll kill you !”

Stegron is a minor, but cool villain. Dr. Vincent Stegron would have been an employee at either Lexcorp, STARLabs or the Sunderland Corporation (this is probably the best choice) and would have changed into Stegron the Dinosaur man in the Antarctic.

Possibly his first opponents were the JLAntarctica :-), but heroes who well can substitute Spider-Man, like Blue Beetle or Blue Devil are the most fitting opponents.

To further build on the Sunderland connection: Dr. Vincent Stegron once upon a time worked together with Alec Holland, who later became the template for the Swamp Thing. 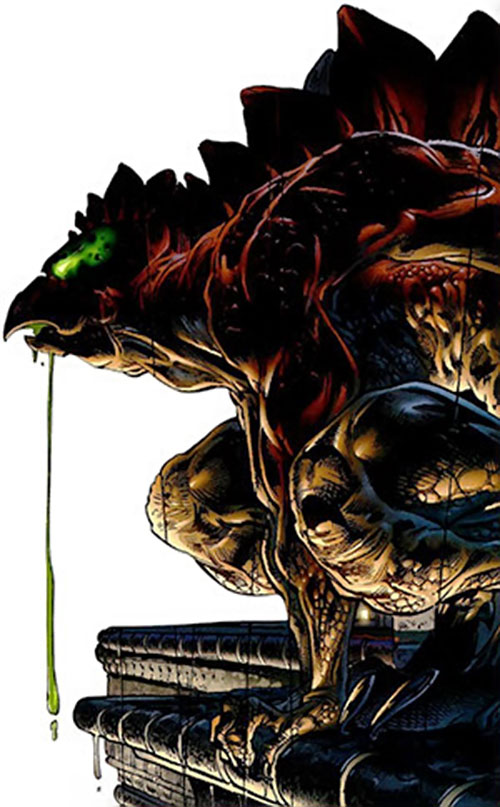 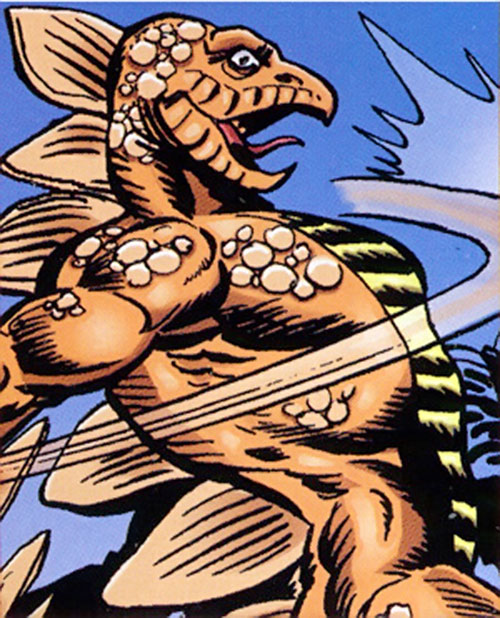