They also presented a character archetype that was somewhat different from the usual. Thus, this profile presents a stock 1990s S. Seagal action character. They tended to be interchangeable, so the specifics aren’t important.

Steven Seagal’s character always shows off an incredible array of aikijutsu movements. His martial arts skill almost defies belief and he can easily defeat multiple opponents unarmed while they are armed. He also knows very well how to use different weapons such as a bo staff, a sword or a gun.

Seagal’s character usually has military and detective skills as well as other useful skills. He rarely relies on stealthy skills, however, and prefers to go straight to the opponents and pressures them for information. He usually doesn’t get until he has beaten them up good (in DC Heroes RPG terms, treat this as a physical Character Interaction maneuver). 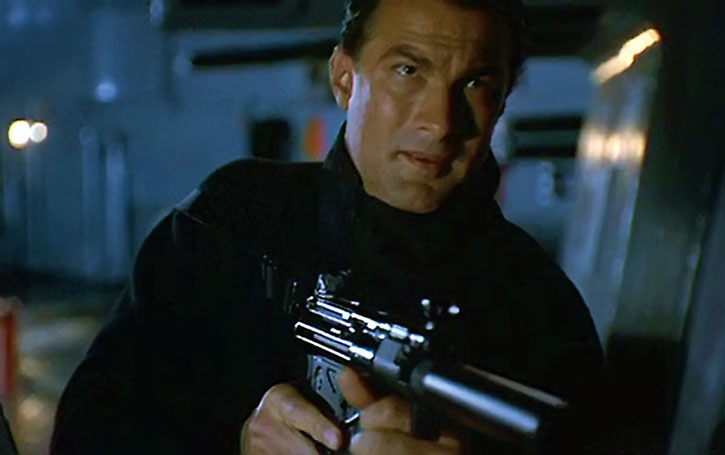 Seagal is, when not a soldier, a most efficient cop. He always gets the job done even though he doesn’t always do it the ‘law way’.

Being an aikijutsu expert he usually lets the opponents own strength work against them in a block and counterstrike maneuver. This is somewhat reminiscent of the fighting style of Kwai Chang Kaine in the Kung Fu series.

Seagal is, with a handful of exceptions, never hit in his movies.

Steven Seagal most often played a tough cop, Special Forces operator, detective or similar. Many of the story plots end with him physically beating up the bad guys. Sometimes he also gets the girl in the end.

The movies are filled with fighting scenes. Even though the plots are the same, these scenes were notably well-executed by 1990s Western action cinema standards.

Seagal is a tall and strong man. He moves slowly and coolly until its time for combat. Then he will explode into a fast series of movements and opponents will soon be defeated or even dead. 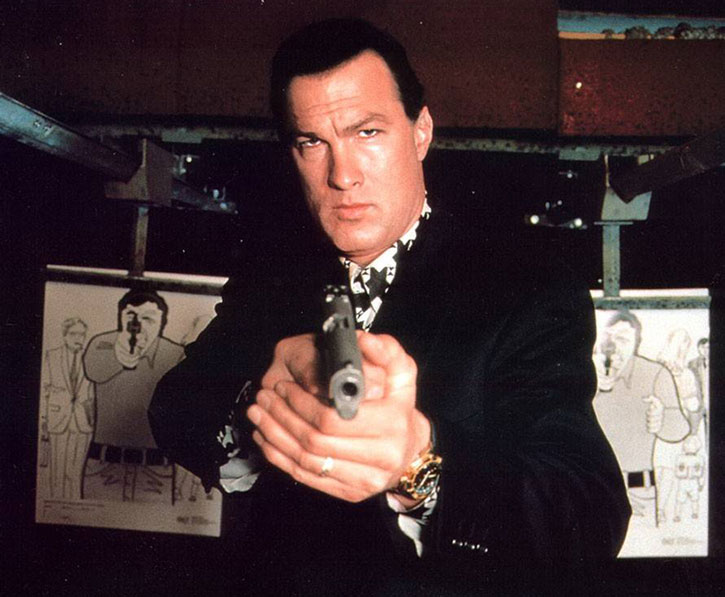 Seagal’s characters appear to be the dark stranger type. As such he has quite an attractive force on the female characters around him.

He is always clad in dark clothing such as black shirts and black jeans, which is fitting for his demeanor. He walks in a resolute and straightforward way. He appears to be real about the stuff that he does.

Seagal usually plays a tough defender of justice. Almost always he is after revenge and justice for someone who attacked his friends or family.

In social situations he is keeping a low, humble-ish profile. As a loner, and appears to be a stranger, but working for the good.

Bad guys risk dying if they attack him, which they sooner or later will be provoked into doing. He believes in going straight to the top. He’ll threaten them and if they don’t stop incapacitate or kill them.

Seagal immediately realizes when he’s threatened. Thus, he always strikes before the opponents do (in DC Heroes RPG terms, he wins the Initiative). He’ll usually defeat many of them before they even realize what’s going on. 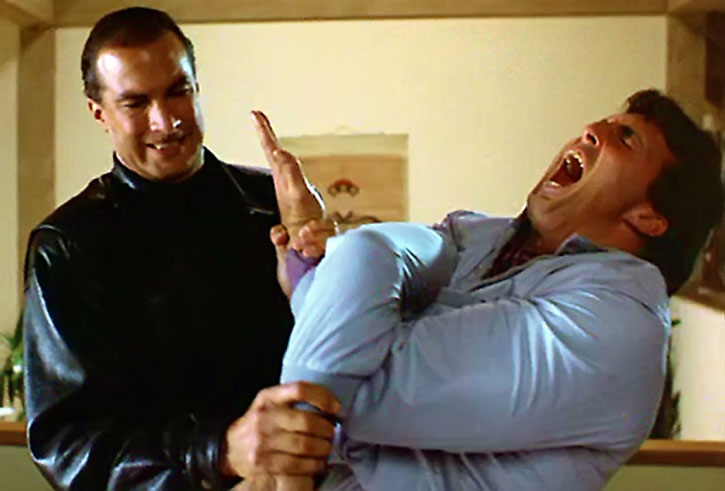 He is very protective of the innocent. If someone is attacked in his vicinity he will most certainly interfere and defeat any attacker.

Seagal is always cool and talks cool and quickly gains the reputation of being a tough guy in any area in which he’s currently working.

He is terribly driven by the sense of justice. He will often break the law and civil rights to finish the opponents off; justice and the law are not the same in his eyes. It might be that he enjoys seeing the bad guys hurt, or just thinks it’s the most efficient way. Because Seagal’s locks, throws and kicks look really painful.

Despite the brutality Seagal’s character seems deeply involved in Eastern philosophy and thought, and often denounces violence. Still, he will go contrary to his own words and strike or kill the opponents whenever he is threatened.

“I don’t like to fight.” (and then proceeds to pummel the first bad guy that shows up)

“Fuck you and die !” (while ramming a broken pool stick through bad guy’s throat)

Seagal’s character could easily be put into the DC Universe as a super tough cop or Army man. He is very able and gets the job done in a vigilante sort of way which could go against the workings of Upholding the Good type of guy. Just use him on the street or make him appear in an action movie the characters are watching while waiting for news of interest!!

For the ultra-continuity conscious, Seagal was mentioned as a martial-arts actor in an issue of Question Quarterly by Marco. 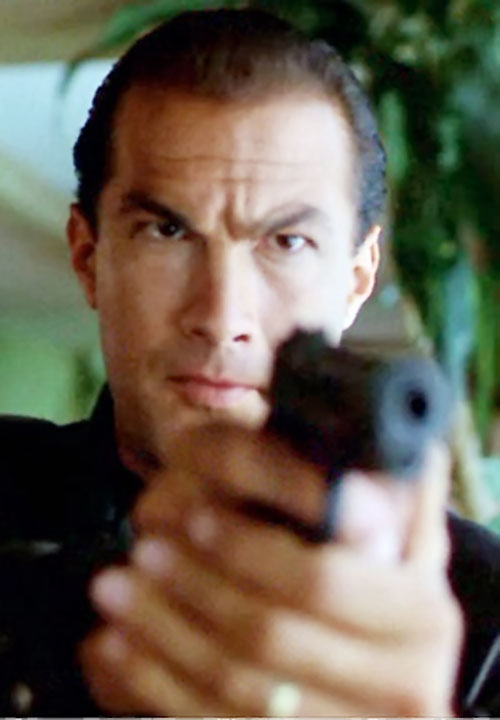 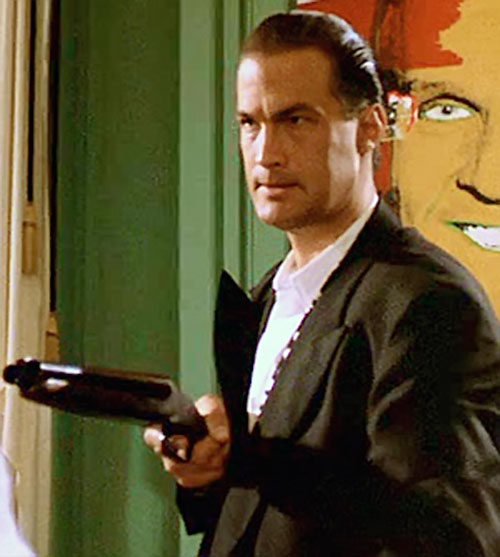 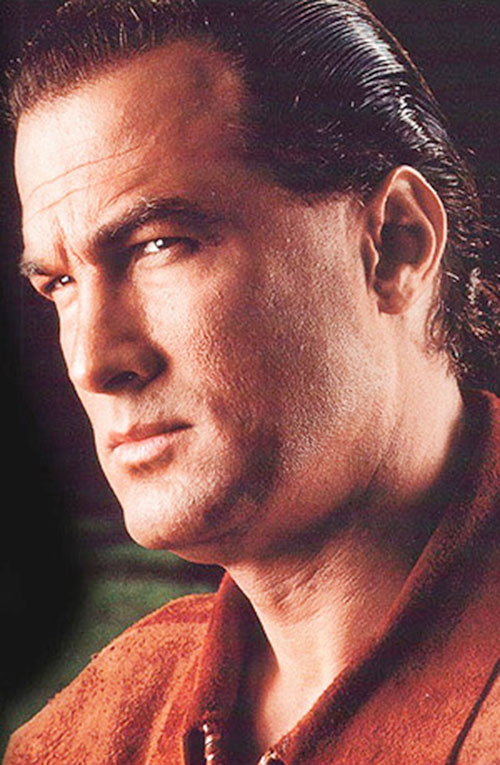 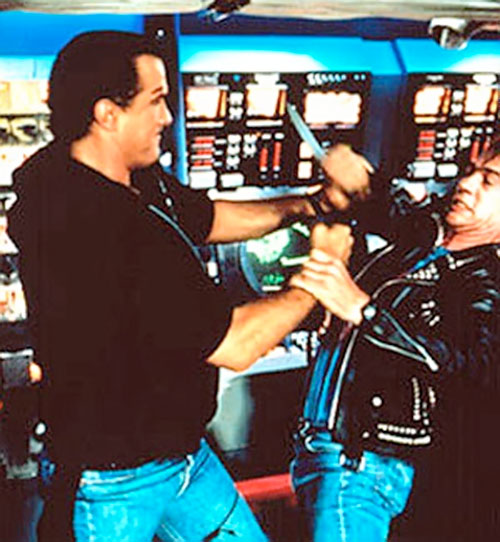