The “stick man” web animation by Zhu Zhq (Zhu Zhiqiang) enjoyed some viral spread back when this entry was written. It still can be found on YouTube .

Stick Man snuck into a warehouse and kicked a bunch of other stick men’s asses.

One of the other stick men was “BOSS”. He was purple and a real bad-ass. Stick Man actually had to use several slo-mo sequences and a special effects shot to defeat him. In DC Heroes RPG terms that’s a Power Reserve. BOSS also has one, but he’s got fewer Hero Points .

The DCH mailing list’s fashion tip of the day : Stick Man Fighter would be a way cooler cat if he had a ’fro – word up.

That applies to you, too.

The Stick Man Fighter is a really badass fighter, trained by none other than Stick Man Wildcat I, we bet !

His personality is a cross between Neo in Matrix and the karateka in, well, the Karateka early video game . Well, presumably. Which is not much, but that’s not the point anyway. The point is to kick ass.

“…” (Stick Man Fighter needs no words when his fists do the talkin’ !)

Of course, if he were to come into a non-stick-figures dimension, most people would be surprised (and he would have Distinct Appearance).

The Question was motivated to assume his unique featureless motif after witnessing the unparalleled fighting fury of the Stick Man. Shiva and Stick Man have sparred on occasion, but have not truly tested their skills against one another yet. Be careful, Stick Man Fighter !

Rumor has it that Arnold Schwarzenegger will revive his acting career to play the Stick Man in the upcoming hundred-million dollar blockbuster live-action film: Shtick Around.

Bonuses and Limitations:
Power Reserve is a Minor Marginal Power (-2).

Drawbacks:
Tradition dictates he does all of the fightin’ to save a Dependent (who might kick him in the head on the last level – be careful, Stick Man Fighter !) and that he has a SIA to some kind of code of honor. 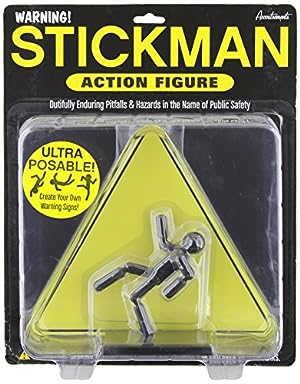