Stiletto is a well-trained athlete and fighter. He can withstand a surprising amount of punishment.

His main weapons are wrist launchers shooting dense bursts of fléchettes . He has speciality ammunition for his launchers, such as explosive fléchettes. With both launchers spitting explosives, he could bring a suburban house down with one long burst. Other fléchettes can deliver low-dilution tear gas.

Stiletto also carries special knives on his belt. The first blade could shoot lightning, the second cold. A third knife — the sonic stiletto — emitted vibrations that could turn flesh into jelly.

The speciality fléchettes and special knives were only used during his earlier appearances, and never demonstrated since. Though they’re still in our game stats, it is entirely possible he no longer has access to this sort of weaponry.

Stiletto seemed immune to the effects of his own sonic and cold-based weaponry. Thus, we assumed that the costume had protective capabilities against those.

Stiletto is the son of warden Tyler Stuart, who managed Seagate prison during Luke Cage’s last months there. Warden Stuart was a liberal, who cracked down on the racist brutality of the correction officers at Seagate. His politics earned him many enemies. When Cage escaped from Seagate, those seized the occasion and had him fired.

Perhaps as a reaction to this incident, Stuart’s sons Thomas and Timothy grew up hating criminals and convicts. Tom in particular saw cons and ex-cons as little more than fundamentally dangerous animals to be put down.

Tom Stuart was presumably the one who came up with the project of becoming a killer vigilante stalking escaped convicts and other criminals. Considering that his ends justified the means, he developed the Stiletto identity with the help of black market suppliers.

Stuart soon became a member of the Justin Hammer stable of super-villains. He thus received special weaponry and support services in exchange for a hefty cut on any benefits.

Among the persons Stiletto stalked were the three men known to have escaped from Seagate. These were three former members of the Rivals street gang of Harlem. He eventually found all three — Shades, Comanche and Luke Cage — under one roof. They had come to confront Rackham, a former corrections officer at Seagate with a long track record of brutality.

Though others were present (beyond Rackham those were the stoolie Flea and a civilian, Mrs. Jenks), Stuart opened fire and destroyed the house they were in. All he achieved was killing Rackham, who fatally shot Mrs. Jenks before he died. Cage attempted to take Stiletto down, but Stuart threw everything and the kitchen sink at him and managed to escape.

Tom Stuart came back with his brother Tim (operating as Discus and also wielding special weapons). They attacked Cage in his Times Square office. They initially had the upper hand, but Cage ultimately clobbered them.

Their father, the former warden, then came in. Though he did not know what his sons were doing, he had deduced that they were up to no good. Mr. Stuart asked Cage not to press charges. The hero for hire, remembering Warden Stuart’s anti-brutality policies, agreed.

Months later, Luke Cage was finally exonerated in court from the fabricated charges that had sent him to prison. His triumphant lawyer threw a big social event to celebrate. But the Manhattan jet set was not the only type of people who responded. The Stuart brothers considered that the trial’s outcome was a perversion of justice, and decided to hit the party to kill Cage.

This did not go well. Cage’s buddy Iron Fist (Daniel Rand-K’ai) and their friends Misty Knight and Colleen Wing responded after evacuating the guests. The Stuart brothers managed to retreat, then went on the offensive again to kill Iron Fist when he slipped on some ice. By that point, the police had entered the situation, and Stiletto shot NYPD Lt. Scarfe.

Seeing this, the furious Misty Knight shot Tom Stuart in the shoulder with her .44. She was about to give him a faceful of magnum when Cage blocked the shot with his hand. Lt. Scarfe survived the attack, as the fléchette that hit him was stopped by his badge.

Battle at the Hammer villa

By this point, Stiletto and Discus had long crossed the line. They were clearly criminals. When they were next seen, they were present on Justin Hammer’s floating villa as part of the extensive security detail. They tried to take down Iron Man, along with such Hammer flunkies as :

Although they came in last, they attacked first, the first wave having been stunned by a wide-angle repulsor blast. Their attacks proved futile. They were promptly taken out when Iron Man magnetically reversed Discus’ weighted discs on the brothers, hitting both of them in the head.

Imprisoned on Ryker’s Island, the two brothers attempted to go straight and found religion. However, their crooked parole officer sent them to see New York-area criminal Deadly Nightshade, who wanted to rob a society event. She had already recruited Man-Mountain Marko and the new Eel (Edward Lavell).

Nightshade easily manipulated them into joining her heist. Then she hit them with mind control dust when they realised that they had been played. The heist was stopped by Iron Fist and Power Man (Luke Cage). Once free of the mind control dust the Stuart brothers helped the two heroes for hire take the Eel out.

Though they seemed determined to leave crime behind, Stiletto and Discus were then seen again as Hammer mercenaries. Presumably, they needed money they couldn’t earn honestly. They joined a small army of low-powered supercriminals that opposed the New Warriors and Spider-Man. Their colleagues were :

That fight did not initially go very well for the brothers. Stiletto was incapacitated when Spider-Man webbed his face, and Discus ran away after accidentally wrecking the power pack of the Beetle.

They managed to regroup with the villainous crew, and their constant harrying of the Warriors and Spidey finally allowed them to corner them where Hammer’s ally, the Sphinx (Anath-Ma Mut), wanted them. However, the heroes later escaped and thrashed them.

Years later, Stiletto joined a motley criminal crew working for Deadly Nightshade and/or “Boss” Morgan. They fought the Black Panther and allies of his. He now seem to function as a small-time costumed mercenary, spending time at the Bar With No Name to get contracts and working for the likes of Hammerhead.

Stiletto was a self-righteous vigilante, convinced he had every right to “clean up society”. He hated the very concept of rehabilitation. For him anybody who ever spent time in prison for any reason is irredeemable and would commit crimes again, and sooner rather than later.

His hatred was deep and personal. He craved seeing the people he hunted suffer and be crushed and humiliated.

Stiletto was so intense about this that he was entirely willing to inflict considerable damage and put bystanders in grave danger (or even outright sacrifice them) if he deemed it necessary. He was also pretty good at deciding that the associates of ex-cons must obviously be criminals themselves. He even shot cops preventing him from conducting his “mission”.

Furthermore, he seemed to be a racist.

Stiletto now seems to be a basic costumed thug and mercenary. And not a very competent one either, though he’s tenacious. How his motivation and his mindset have evolved remains unexplored.

“It’s just like I told dad ! Once a con, always a con. But society won’t have to worry about Luke Cage — self-styled ’hero for hire‘ — much longer ! Because Stiletto will put that vermin back behind bars — where he belongs ! And if Mr. Cage resists… it’ll be the last thing he ever does !”

“How convenient ! The three convicts and a murderer — all under one roof ! It’s really too bad the stoolie and the girl are in there with them, but… when you lie down with dogs, and so on…” (opens fire)

“I’m taking you in ! You and your criminal kind have terrorized this country far too long ! This is where lawlessness and disorder are handed their first in a long, never-ending series of defeats… courtesy of Stiletto !”

“Out of the way, you fools ! We’re on the trail of a dangerous criminal !”

“This time there’ll be no silver-tongued lawyers, no bleeding heart judges, no technicalities — this kind you’ll get the punishment your kind deserves.”

“Am I insane now ? For trying my best to sweep the human garbage up off our streets ? Trying to make those streets safe for decent people ? You crooks don’t play by the rules, buster, why should I ? All that matters in the end is winning.”

Up until the fight with Iron Man in Mr. Hammer’s floating villa, Stiletto and Discus were surprisingly effective. They could fight harder and longer than most would expect from such minor thugs, though their low power level and poor tactical acumen meant victory remained unlikely. Starting with the fight at the villa, they became normal mooks.

To represent this, the HPs total for them before the villa fight should be 040 for Stiletto and 035 for Discus.

Before he gave up and became just another costumed criminal, Stiletto’s Motivation was a villainous form of Seeking Justice 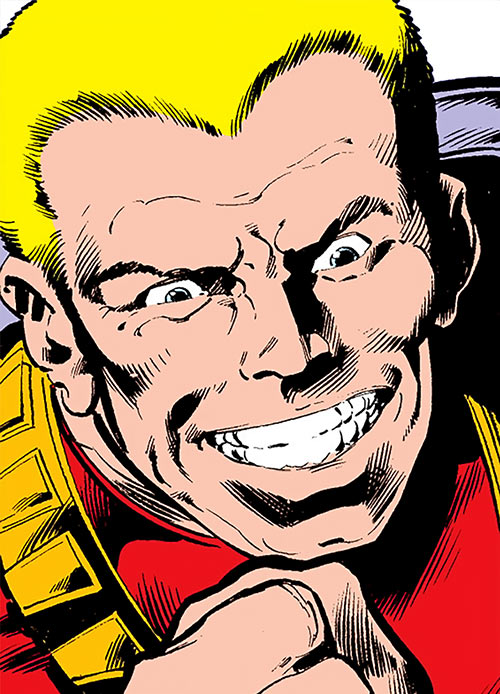 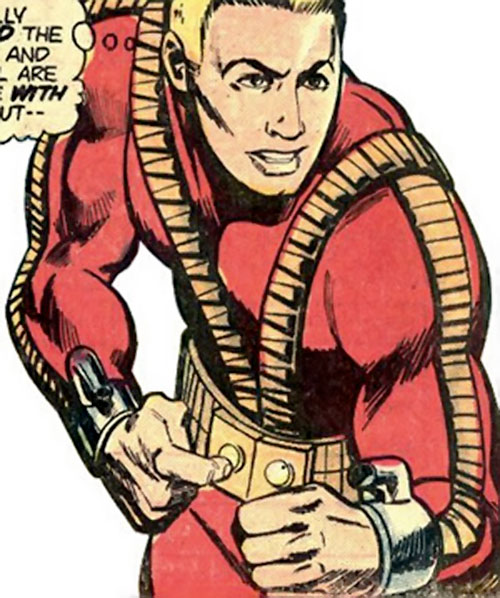 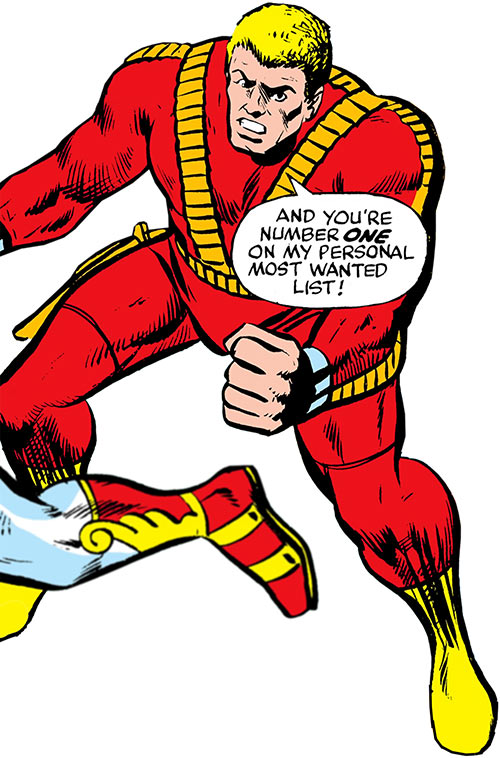 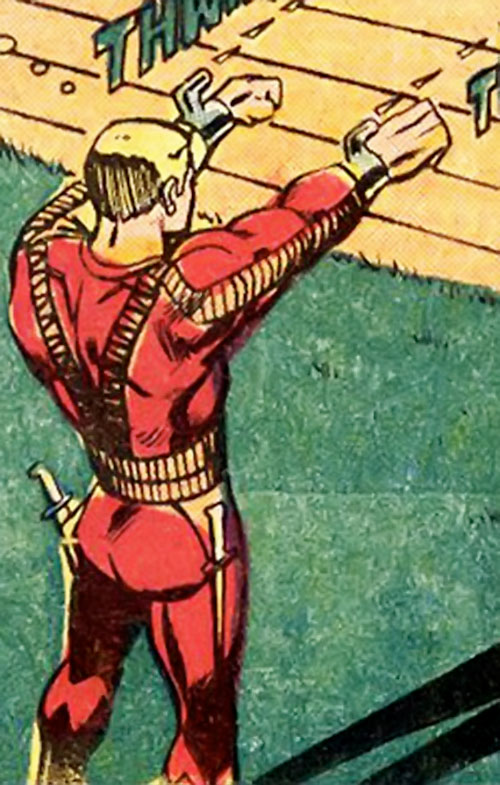