Stinger (W. Sherman) is a minor mutant criminal in the Marvel Universe.

She primarily appeared in a 1986 X-Factor story, working for Apocalypse.

Stinger can generate bolts of lightning from her hands, “stinging” opponents by electrocuting them.

She’s the only Alliance of Evil member with a ranged attack. Unless you count the occasional car-throwing from the superstrong members. 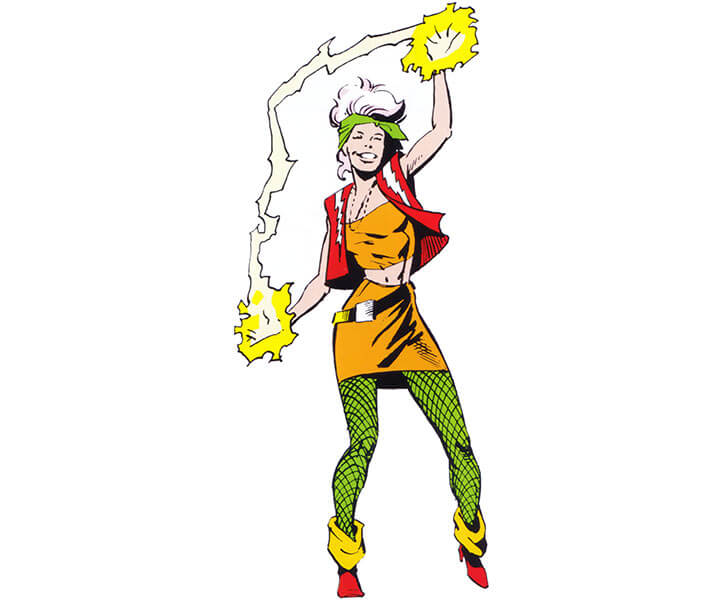 In 1986, Stinger was one of the mutants serving Apocalypse (En Sabah Nur) against X-Factor as the Alliance of Evil.

All the other members of the Alliance seemed to be experienced mercenaries. By contrast, Stinger likely started her career as mutant muscle for hire by joining the Alliance.

She was still with the team during the Inferno. Acting more irrational and aggressive than normal, they rioted as a protest against the 1988 Mutant Registration Act.

After losing a brawl against X-Factor and the future X-Terminators, they were arrested by Mystique and her Freedom Force.

In 1991, along with Tower and Frenzy (Timeshadow had left), Stinger worked for AIM. They helped Harness and Piecemeal recreate Proteus. But they were defeated by X-Force.

Stinger reportedly served a lengthy prison sentence after that incident. 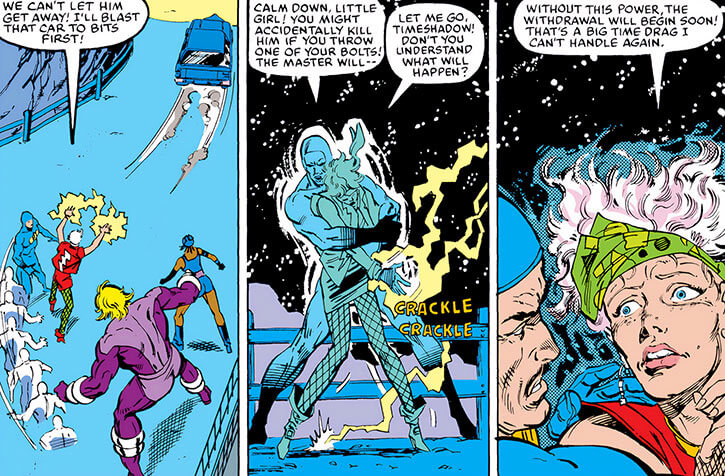 By 2010, Sherman was one of the mutants who received sanctuary on the Utopia island, in San Francisco Bay. She had survived years of crises, massacres, etc. against the mutant population, and had retained her powers despite the Decimation.

However, her nerves were shot, anxiety was grinding her down, and she felt socially isolated.

Stinger asked Iceman (Bobby Drake) to calm her fears, but he handled it *terribly*. Freaking out, Sherman briefly took Dr. Kavita Rao hostage. But this time Drake handled her call for help much better. Sherman and Drake started occasionally hanging out to help assuage her fears.

Months later, the final assault she had been fearing so much did come. An army of Nimrod Sentinels from the future attacked, and Stinger was among the mutant fighters opposing them.

A strike force sent into the future did stop the killer robots from coming in, and Stinger was among the survivors when the brutal battle ended.

In 2016, Stinger was glimpsed at Scrambler’s house, among a number of predominantly mutant criminals. These were dispersed by Gambit (Remy LeBeau).

This may mean that Sherman returned to a life of crime for a time. Or it may not.

By 2020, she was living with Omerta (Paul Provenzano) in what may have been a suburban area in upstate New York. They had an infant. But as they were discussing whether to move to the Krakoa mutant state, their baby was abducted.

Stryfe was slain by a mutant strike force. When the infants were processed, Sherman and Provenzano decided to take the clone in as well as their baby. At this point, they were still living in the US.

During the 2010s, she had a more modern Californian look. She was still partial to orange and yellow hues, and usually had a small crop top and a little skirt. Plus a nice pair of chucks.

In 2020, her irises had become pale yellow, and seemed to slightly glow. Since she complained that she couldn’t pass for human, it might be a continuing side effect of her mutation.

In 1986, she was feverishly addicted to Michael Nowlan’s power. This may point to a previous history of substance addiction.

She’s attracted toward good-looking guys such as the Angel, even in the middle of a fight.

She seemed loyal toward Frenzy.

In 2010, Stinger was frightened by everything her species had been through. This anxiety made her a sucker for alarmist rumours about Human raids. She thus clung to Iceman, a long-time mutant hero who survived innumerable threats, to have a less fearful life.

The 1980s mannerisms were gone, and she seemed nice enough. Needy, but no longer junkie-like.

One gets the impression that she has an anxiety condition, exacerbated by anti-mutant prejudice. This may have left her chasing parties and narcotics to seek relief, and falling in with increasingly bad crowds. 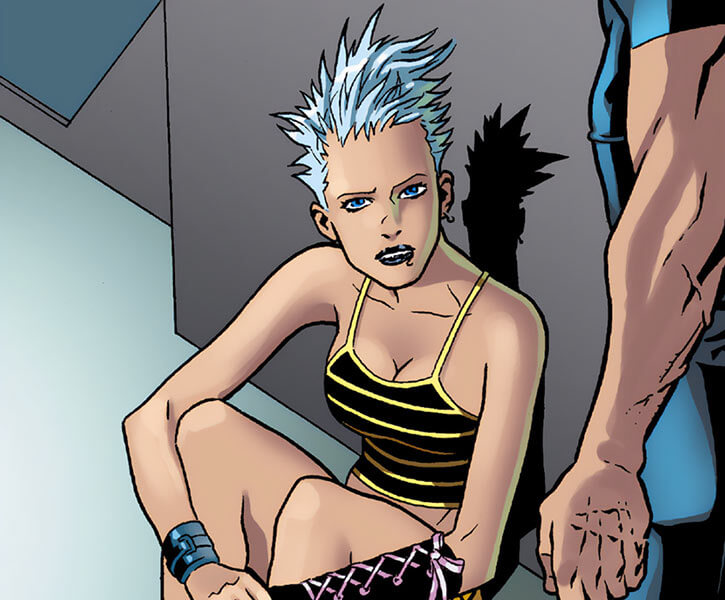 “Without [Nowlan’s] power, the withdrawal will begin soon ! That’s a big-time drag I can’t handle again !”

“Boy — this ice guy is a humongous downer.”

“So, like, what’re you doing slumming with these losers, Beastie Boy ?”

There ain’t, like, much material. So good chunks of the stats are stock ones. 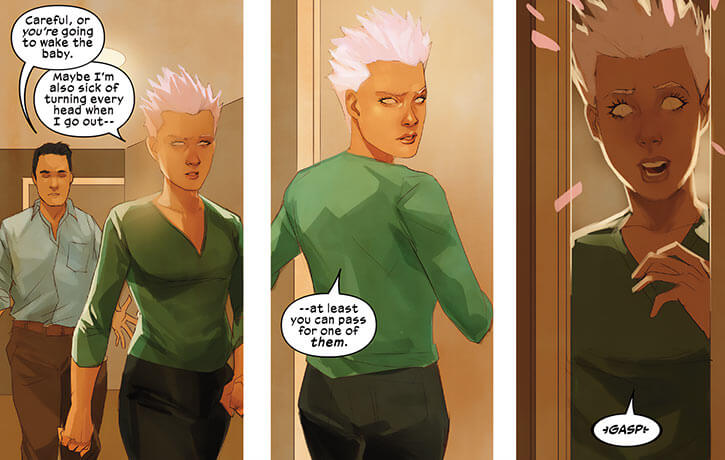 When Stinger was buffed by Mike Nowlan, she had four more Ranks of Ranged Damage.