Stoneface is a… (counts on fingers)… F-list, obscure Marvel bad guy. He appeared in a handful of Captain America stories during the early 1970s. Plus a couple of early 1980s stories.

There isn’t much that’s cool or notable about him. But if you need a forgotten Marvel mobster…

Stoneface seems to be a big guy, with decent pain tolerance.

His combat skills are unimpressive, though he’s not a bad shot either.

He sometimes keeps an AK-47 around for self-defense. Otherwise, he’ll have a .45 semi-auto pistol.

His main assets are : 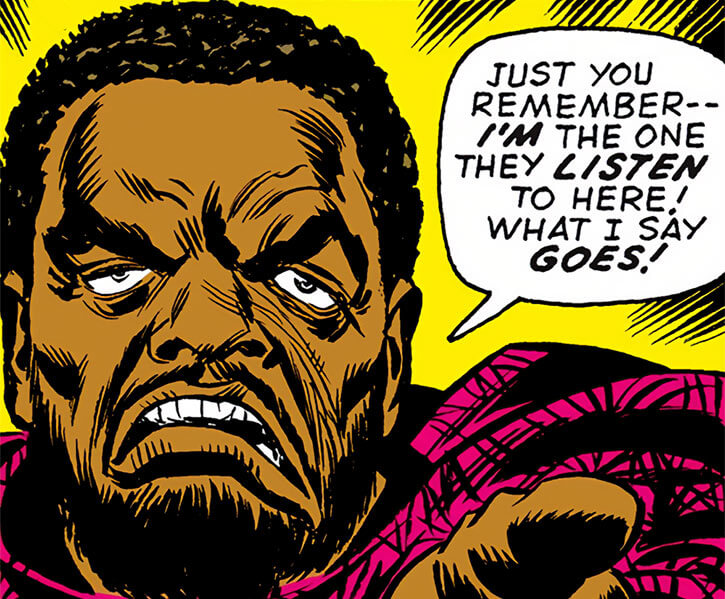 Back in 1971, Stoneface ran a sizable mob in New York City. His power base was Harlem, but he had been expanding.

One gets the impression that he took a series of big risks that all paid off. Which put him near the top of the heap for a while.

One stable source of revenue was a large numbers-running network. Playing “numbers” is a sort of illegal lottery. Numbers, “policies” and similar grassroot lotteries have been part of low-income urban neighbourhoods for much of the XXth century.

Jody Casper, the nephew of the Falcon (Sam Wilson), became a runner. That is, he collected the cash from numbers bettors in complicit shops.

He swallowed Stoneface’s swagger hook, line and sinker. He was convinced that Stoneface wielded massive influence. And that he would make Jody a rich and feared man.

Jody was arrested. Sam Wilson used his pull to get him clemency. But as a result, the mobsters thought that Casper had turned informer. They beat Jody, then shot his mum when she interfered.

Incensed, the Falcon and Captain America (Steve Rogers) gave chase. They thus located Stoneface’s HQ and took everyone down. 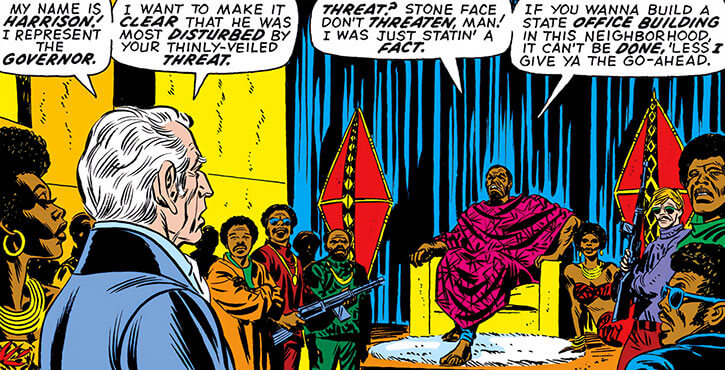 As soon as Stoneface made bail, he sought revenge and to reestablish control over his turf. He even managed to capture the Falcon.

The Falcon wasn’t executed right away. Stoneface was busy with a big blackmail scheme. He was demanding one million in cash from the State government. Otherwise, he’d sabotage the construction of a new public office building in Harlem. This was his first step in his roadmap to become New York City’s kingpin.

(The 1970s and most of the 1960s were an era of relative chaos, between the reign of the traditional kingpin (Alexander Bont) and his eventual successor (Wilson Fisk). Numerous mobs rose and fell.)

(There also was considerable Maggia infighting, with some families such as Hammerhead’s proving hard to control and the Manfredis becoming weaker.)

However, Stoneface’s luck broke bad. His HQ was attacked by the Falcon, Captain America and Spider-Man (Peter Parker). He and his many enforcers were easily vanquished.

Something with fitting visuals to evoke 1971… yeah, Marvin.

Stoneface nevertheless fled the US. That was thanks to the backing of another Harlem crime lord.

With Stoneface thus out of the way, “Boss” Morgan became the new big man of the Harlem underworld. He seemingly took over much of Stoneface’s organisation.

Stoneface lived as a wealthy expatriate in Nigeria. He ran lucrative criminal activities there, of an unclear nature. Perhaps he arrived with a lot of heroin in his luggage.

In 1974, he kidnapped Leila Taylor — the Falcon’s girlfriend — in Lagos. His men also gunned down two Wakandan aides accompanying her.

Wakandan intelligence promptly located Stoneface. The Black Panther (T’Challa) and the Falcon stormed his villa within hours of the kidnapping.

Stoneface briefly had the upper hand, as the Falcon had no experience with his brand-new Wakandan flying apparatus. But the criminals were soon taken down.

Stoneface stayed for but months in Nigerian prisons. His influence meant freedom, a fake ID, and the opportunity to convert his Nigerian assets into jewellery to carry.

He created a small gang, the Young Watchers. These would pretend to be a neighbourhood militia, like the Guardian Angels. But the inner core of the Watchers were criminals.

The other members thought they were helping fight crime, but ultimately they were a smokescreen.

(The Guardian Angels were big in 1981, two years after they were founded. Though there was significant controversy. But many New Yorkers agreed that the subway system was terrible and unsafe, and that volunteer safety patrols could help.)

Sam Wilson — in both his identities — and Spider-Man realised that something was wrong with the Young Watchers. They eventually figured it out and took down Stoneface and most of the criminal core.

Some criminals fled. But they were captured by honest Young Watchers.

In the heat of the auction

In 1983, Stoneface spread rumours about an illegal auction of top-secret computer chips, open to foreign buyers.

One stage would take place in an art gallery, to verify buyers. The next in an abandoned theatre, where the auction proper would be conducted. Payments would be cash.

There likely weren’t any chips. The real plan was to kill everyone within the theatre, take the cash and vanish.

(There have been multiple underworld auctions for dangerous tech, artefacts and slaves in the Marvel Universe. These precedents likely helped with this scheme’s credibility.)

However the freelance spy Vienna (Angela Tortelli), as well as Luke Cage and Iron Fist (Daniel Rand-K’ai) were on the case. Vienna demolished Stoneface’s plan. She also manipulated Cage and Rand into taking all the risks and doing all the heavy lifting.

Stoneface was punched out by Cage, then arrested.

As of this writing, he has yet to return. 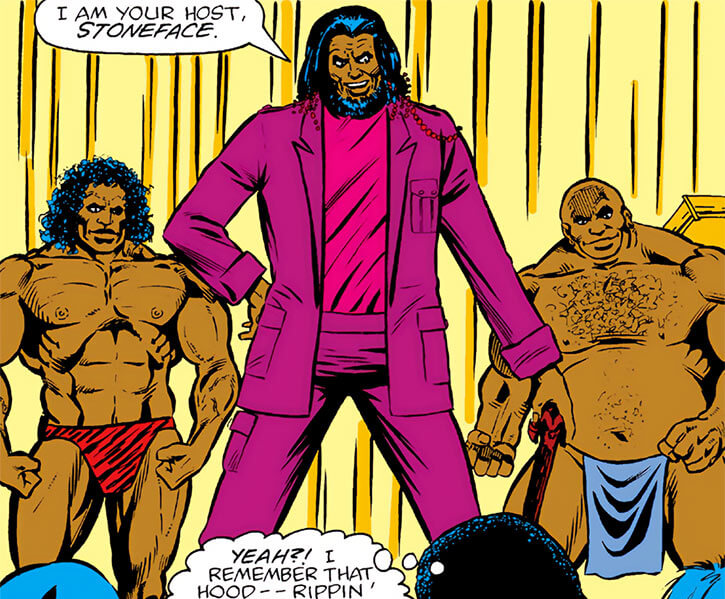 He’s called Stoneface since he’s disfigured. This seems to be a paralysis of most facial muscles, though he can still speak clearly. The left side of his face seems collapsed or dragged down by frozen muscles.

Stoneface understood the importance of projecting the impression that he was a big-time kingpin with vast reach. One of his tricks was to go for pseudo-African clothing (for himself and his molls) and scenery, plus a throne.

This made him seem majestic to many impoverished Harlemites. And many of the White people he dealt with would subconsciously (or not-so-subconsciously) assume that he was a brutal savage, not to be crossed.

At other times, he went more for a jet-set-businessman-in-an-expensive-suit power play. Since he couldn’t set up a decor with extras and stuff.

While in Nigeria, he grew a beard.

In 1983, he looked different. His disfigurement was less visible. Presumably, new treatments had appeared for his condition. And/or the authors weren’t enthusiastic about a physical handicap being an evil character’s hook.

Stoneface was also back to the pseudo-African vibe, but in a more modern manner. He seemed to go more for a charismatic pop-star/entertainer sort of high status. Albeit with a chin strap beard.

He tends to go for impulsive, high-risk, ripped-from-the-headlines criminal setups. If he gets lucky, that means muito moolah. But if not, he’ll crash hard. After all, he’s not Señor Suerte.

In actual techniques and schemes, he’s closer to being a conman than being an actual crime lord. It usually boils down to a confidence scheme, where he manipulates a bunch of saps into taking the hits for him.

But he certainly can run his day-to-day mob operation as well.

Both these strongmen seemed to have been 7′ (2.13m), or close enough. One was a ripped body-building champ, the other weighed 400 pounds.

They were oddly durable. One ignored all of Iron Fist’s blows (except the iron fist) and the other held his own against Cage for a while. Their blows even seemed to affect Cage (but not seriously so).

I’d give these guys their own entry- because we love giant henchmen. But there’s next to no material and they’re never identified (except as “bodyguards”).

As often, the writeup may make the character seem a bit more interesting than they actually were. I tend to dig to find something distinctive in how they operate, highlight it and play it up in the stats (here, with Charisma and Gift of Gab).

In other words, giving him flatter and less distinctive stats would arguably be more correct, yet counterproductive.

Writeup completed on the 2nd of February, 2020.