Storm has the power to control the weather. This means everything from a micro rainstorm to water her plants to a full-fledged hurricane that shuts down the entire eastern seaboard (though she was pushing for that one). She can deliver devastating attacks by focussing weather effects as bursts, by lightning, winds, or solid precipitation.

She seems immune to virtually all weather conditions as her power protects her from negative effects, though she was nearly killed trying to deal with an Antarctic blizzard. 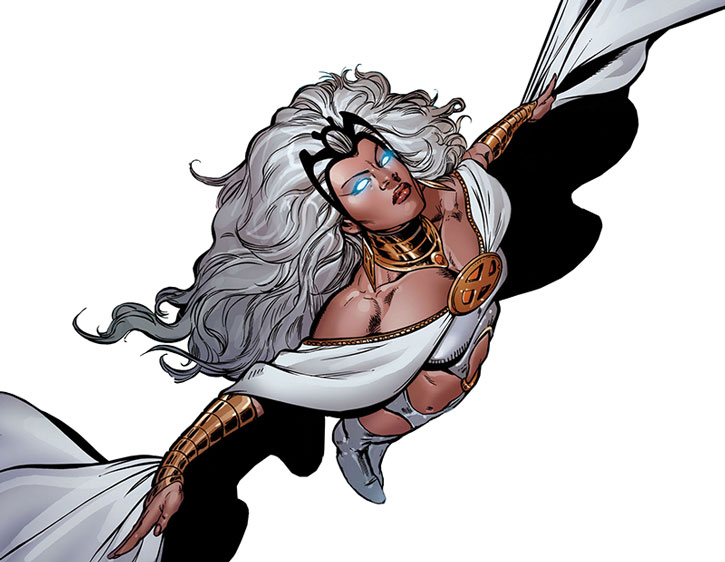 Storm is a statuesque black woman with silver-white hair and startling blue eyes. Her uniform has changed several times in the recent past, but she still favors black leather and gold accents with lightning-like motifs, cloaks to catch her winds on, and complicated headgear.

Her hair has run the gamut from ultra-long to mohawk punk to short (just after she had her head shaved forcibly in Genosha), and now is back to her usual ultra long. 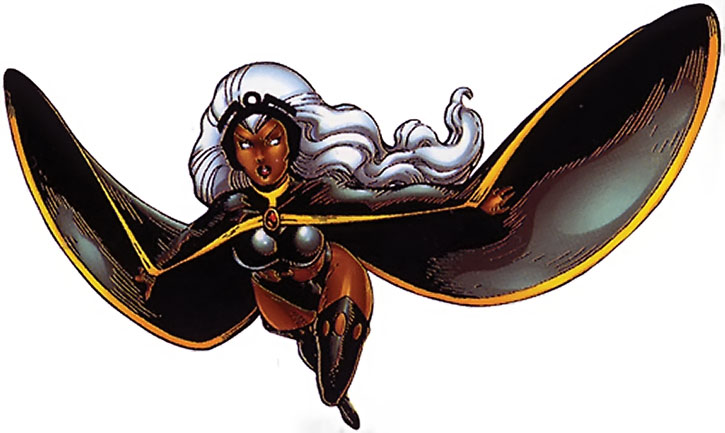 Storm is like her namesake: regal as a queen, cold and aloof to her enemies, frightening in her anger. At the same time she is warm and generous to her friends, nurturing and protective.

It is quite telling of her general personality that she was once worshipped as a goddess by the tribes surrounding Mount Kilimanjaro. This seems to have shaped the woman she has become.

Storm is a lover of Nature in all its facets: she is always surrounded by plants, which she tends like a mother, even talking to them. 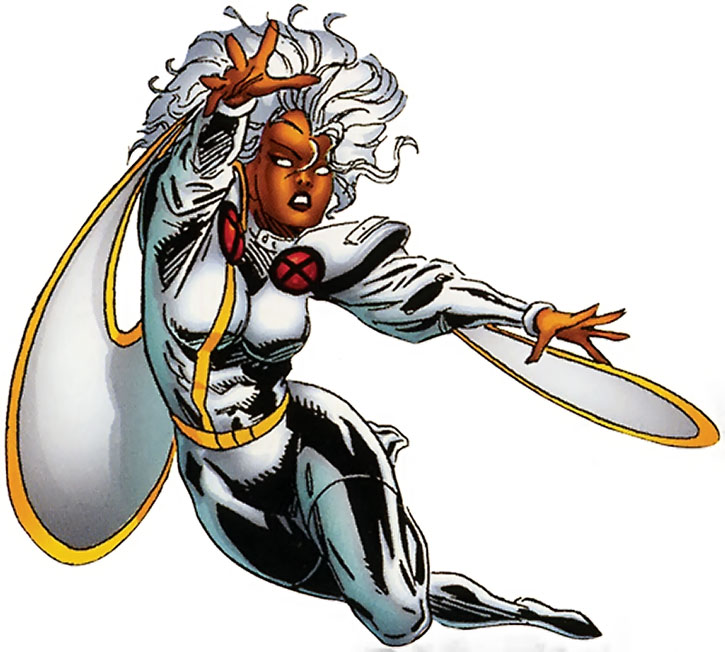 Her most outstanding trait is her strength of will, said to be second only to Xavier’s. This is the trait which has won the admiration of friend and foe alike, including Doom and Loki. She is also a cunning and resourceful fighter: players should be prepared to be inventive while playing her.

“*Thunder ?* Are you so drunk with artificial power that you would compare your impotent noise to the earth-shaking fury of nature itself ? That, boastful child, is not “thunder”. THIS is thunder… the elemental fury of Storm unleashed !” (kraKOOM !)

Unlike most mutants who get “saddled” with Kansas Jim’s (excellent) Mutant History, Storm would more readily blend into the Wonder Woman family of characters.

Ororo’s early life was very similar to her youth in the Marvel Universe, but the worship of the African tribes did not sit as well with her, in the DCU. One night, amidst heavy soul-searching, she took to the skies. But, “something happened” to her while she soared over the Mediterranean. 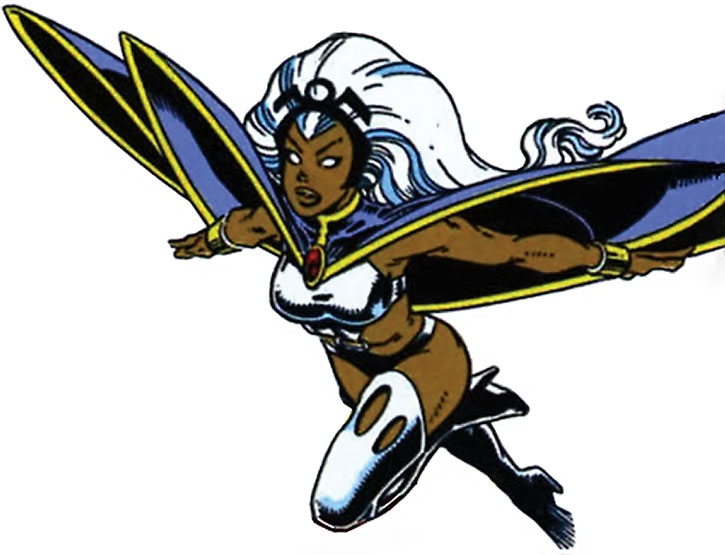 Ororo awoke on Paradise Island, and was welcomed into Amazon society with open arms, becoming one of them. Over time, she came to believe in their ideals (a cloistered group working and fighting to preserve their pacifistic world view in a warlike world, not unlike the X-Men), and was Diana’s closest competitor for representing Themyscira in Man’s World.

Eventually, Ororo left for Man’s World with Donna Troy, and the two supported each other in the search for their parents. When Donna learned her “true” background as descendant of the Titans of Myth, Ororo, once worshiped as a goddess, herself, struck off on her own.

She eventually fell in with the metahuman and alien “freaks” of Netherworld, quickly becoming leader of a tribe calling themselves “Morlocks.”

She would also need to have worked closely with Black Lightning, Orpheus, Cyborg, and DC’s other various black heroes. This connection might even be more important to her, lacking a minority to identify with as she does mutantkind. 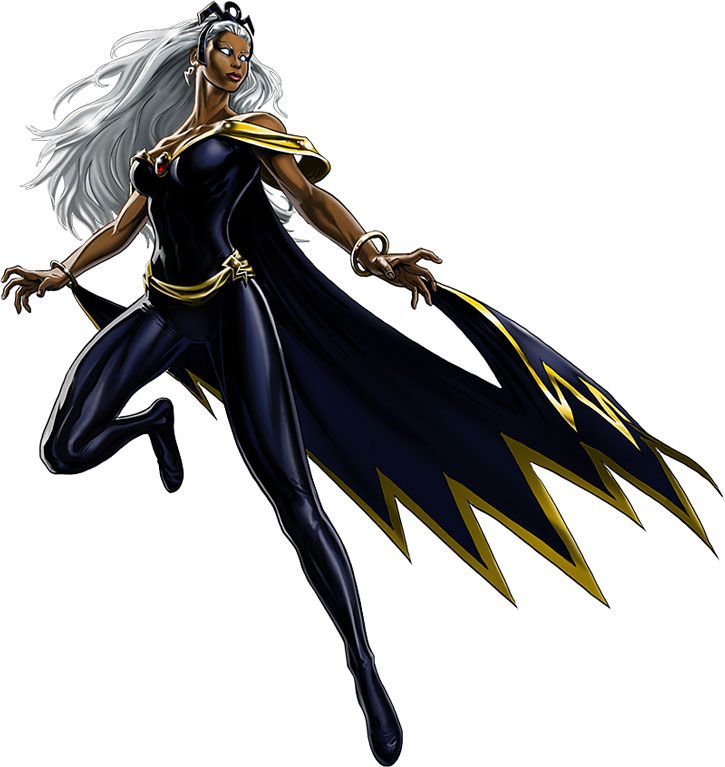 Drawbacks:
Enemy [Shadow King], Mistrust [Mutant], MIA: Storm’s emotions are usually reflected in the weather around her. She can usually control it if she wishes (I.e., she makes her roll to resist the MIA), MIF [Acute claustrophobia].

Equipment:
Lockpicks [BODY 02. These are normally hidden about her person, using the Concealment Subskill Note: Without a set of tools, Any attempt at picking a lock is subject to Difficulty modifiers over and above any already assigned for lock complexity or security systems]. 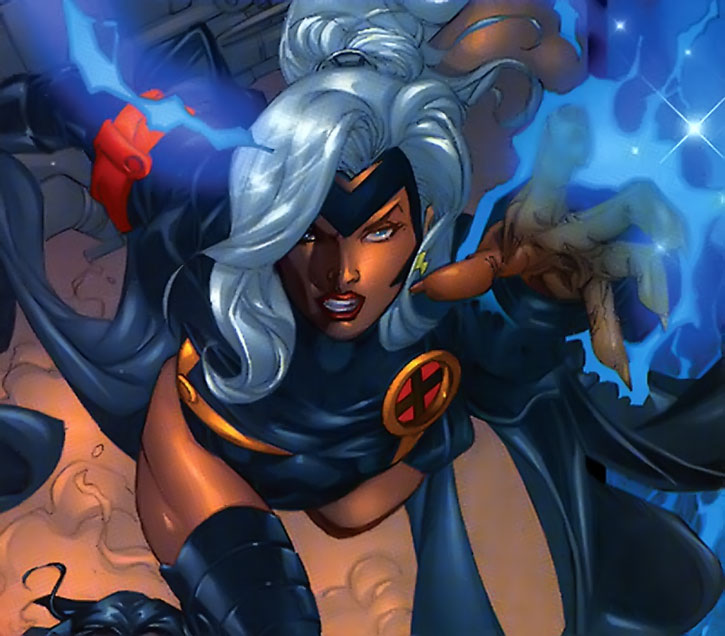 Storm has changed little over the years, but for a younger version deduct 1 AP each from Mental and Mystic Stats, except make Will 10. In earlier stories, Storm’s MIF was a SIF.

During the time she spent without powers, Storm seemed to be much more physically competent than she had been previously. I attribute this to an Increase in her basic Dex to 7, as well as all Skills Linked to Dex, which after she regained her powers, was allowed to slip back to 6. Since there are no rules for this, I consider it a Power Complication subplot of Claremontian duration.

Speaking of Claremont, When Chris Claremont wrote Storm, she displays the Attractive Advantage, but no one else seems to use it. It is included because, although writers don’t seem to use the in-game effect (Character Interaction more effective against members of the opposite sex), still the first thing anybody comments on about Storm is her beauty.

Source of Character: Marvel Comics (X-Men, Uncanny X-Men, X-treme X-Men, OHOTMU entries, varous other appearances over the span of the last 12 or so years). 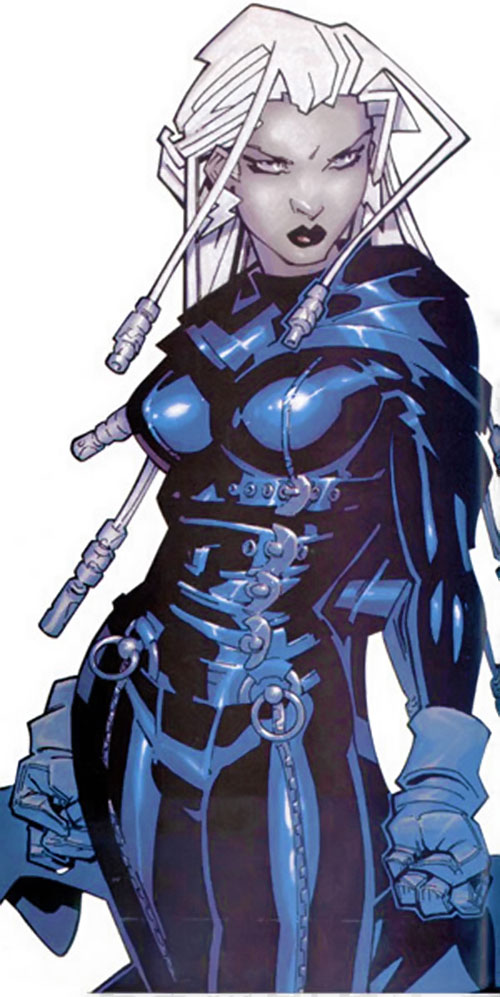 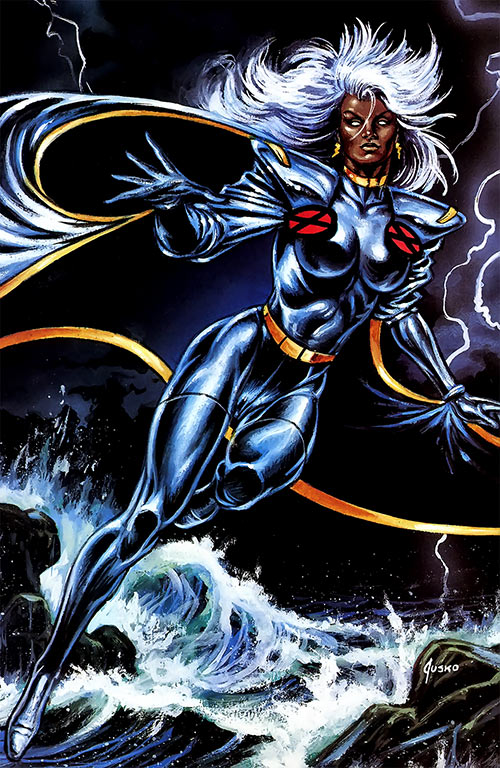 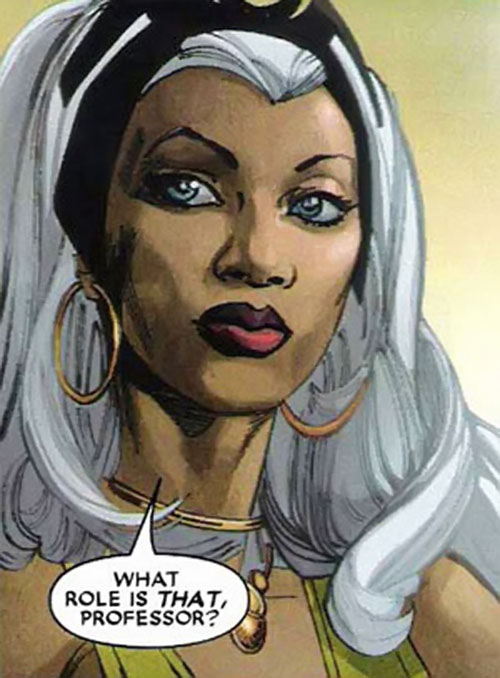 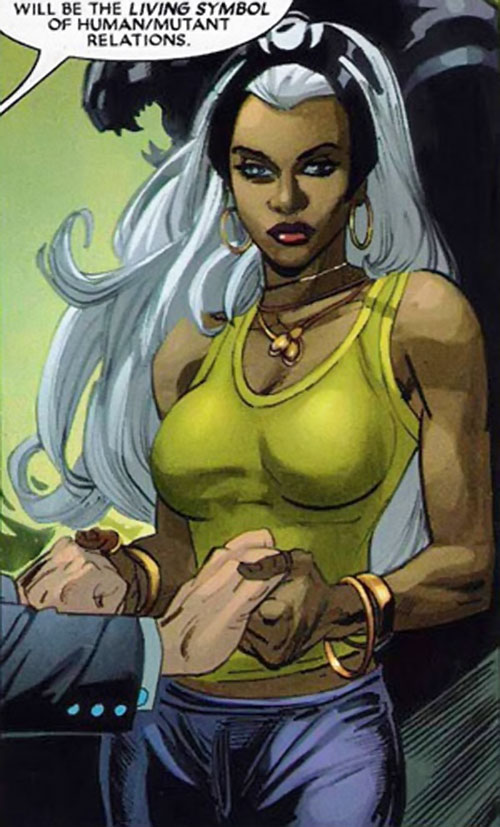 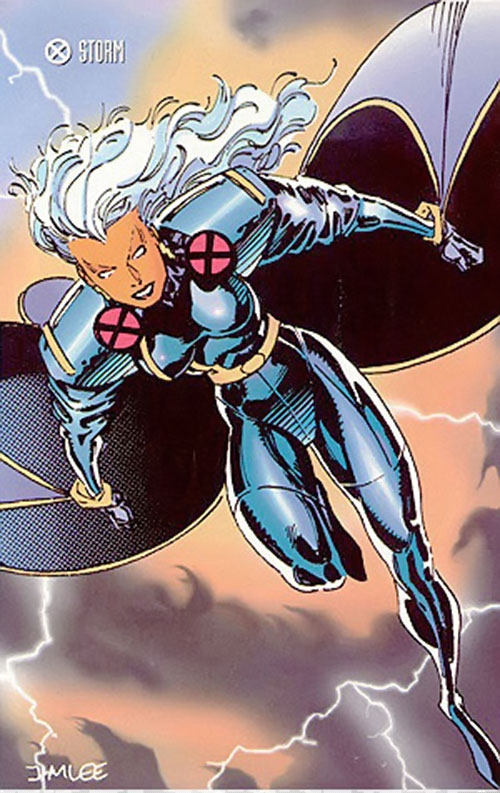 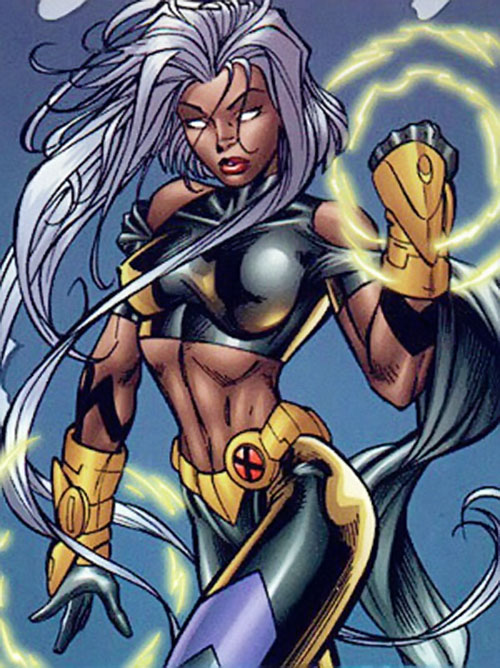 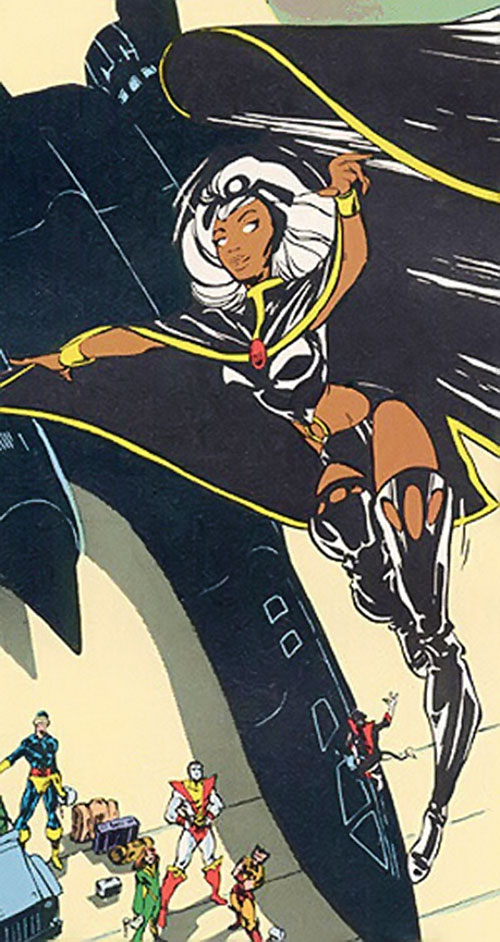 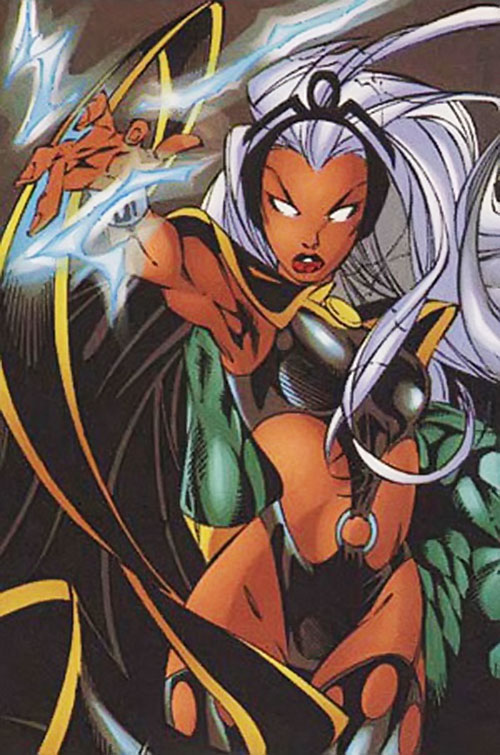