Stratos appeared in the 1983/1984 Filmation animated series He-man and the Masters of the Universe. He did not appear in the She-Ra Princess of Power spinoff.

Stratos is king of the bird people in the city of Avion. For more about that, and the Masters of the Universe setting in general, you can read our “base camp” Eternia article.

Stratos is a member of the Avion race. The bird people of Eternia.

Thanks to their artifact, the Egg of Avion, all Avions have the power of flight. Though Stratos has a low flight speed he is adept in maneuverability.

Stratos is unique among his people, having the power to fire energy bolts from the palms of his hands.

Stratos has shown the ability to move at super human speed. But he only does so rarely.

Stratos is king of his people, the bird men. Their city sits atop a high mesa. They have a powerful artifact, the Staff of the Avion, now mostly used to create fireworks during celebrations.

(Worgmeister’s note – “avion” is a slight deformation of “avian”, having to do with birds. It is also the French word for “plane”, created in the 1800s using the Latin “avis” (“bird”). The latter is why the English language has the word “aviation” and its relatives.)

Stratos is a friend to the Royal family and He-man. On several occasions they request his aid. He often paired with Ram-Man.

In many situations, Stratos’ power of flight came in handy. From delivering messages or rescuing falling individuals.

A dragon attacked Avion. Stratos spoke with Teela and learned dragons were attacking all over the kingdom. Skeletor was behind the dragon attacks and took control of Castle Grayskull.

Stratos realized it was Beast-Man who controlled the dragons. Once defeated the dragons became friendly. Using teamwork, the dragons helped regain control of Grayskull.

Reign of the Monster

Another time, Skeletor tried to free Mulcrum, a powerful being trapped in crystal. When that failed, he tried to steal the Staff of Avion. The Staff could find the weakest point in Mulcrum’s prison.

Along with his servants the evil Torgs people, Skeletor attacked Avion. Stratos flew out to meet their attack, Staff of Avion in hand, but he was captured.

However, Skeletor couldn’t figure out how to use the artefact. Since Stratos was unwilling to give up its secrets, Skeletor put him under mental control. 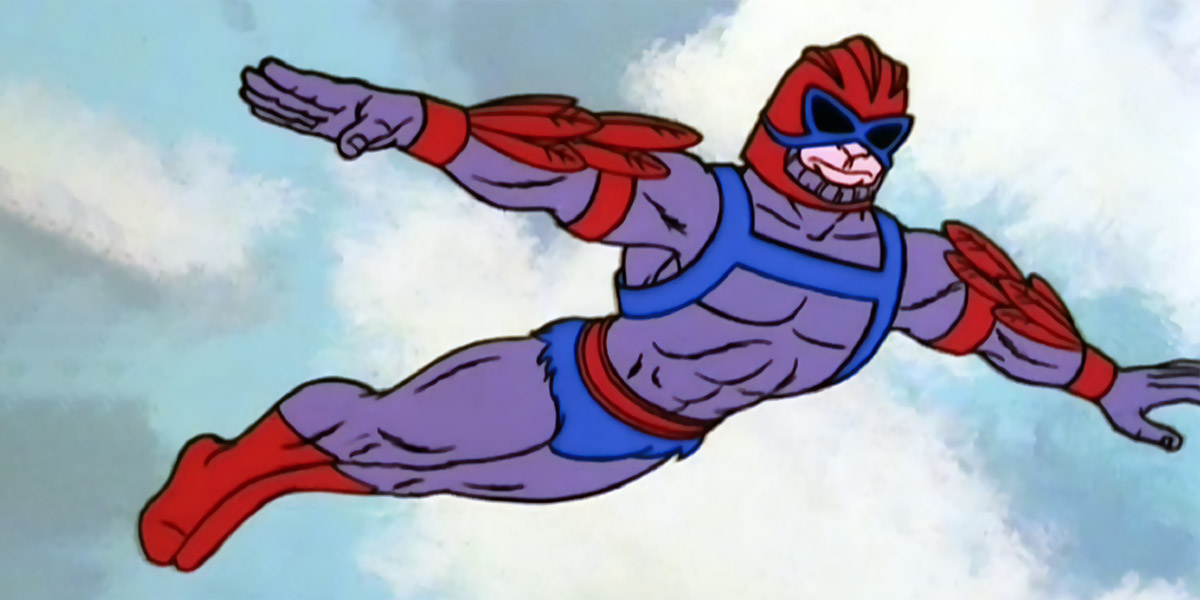 No longer needed, Stratos was then used as a pawn in an attack on the heroes. Delora, Stratos’ sister, pleaded with him and through sheer willpower Stratos freed himself.

The heroes knew that since the staff had been used for evil, it would soon explode. So they split up:

Teela defeated the king of the Torgs in combat, regained the staff, and Stratos took it to Grayskull. He-man threw the Staff into space where it produced an explosion. However, the artefact then fell back to Eternia undamaged.

Hawk then fingered Stratos as the saboteur. Banished, Stratos flew about aimlessly.

He unwittingly landed in the nest of an angry Carrock. The creature gave chase, but He-man befriended the Carrock with fruit.

Meanwhile, the bird-people realized Stratos could not be the saboteur. More defenses were disrupted in his absence, and Skeletor was able to steal the Egg of Avion.

Stratos learned the fate of the Egg from the Sorceress of Grayskull. It had been placed in the Demon Zone and guarded by Skeletor’s warrior, Whiplash (no relation). Stratos accompanied He-man to the Demon Zone and retrieved the Egg.

Once returned, Stratos is again made leader of Avion. Hawk was stripped of rank but dealt with mercifully. The befriended Carrock became a protector of Avion City.

Stratos is a tall muscular man with a gray chin curtain beard (though it might be fur or feathers). He has a small nose and a pronounced upper lip. 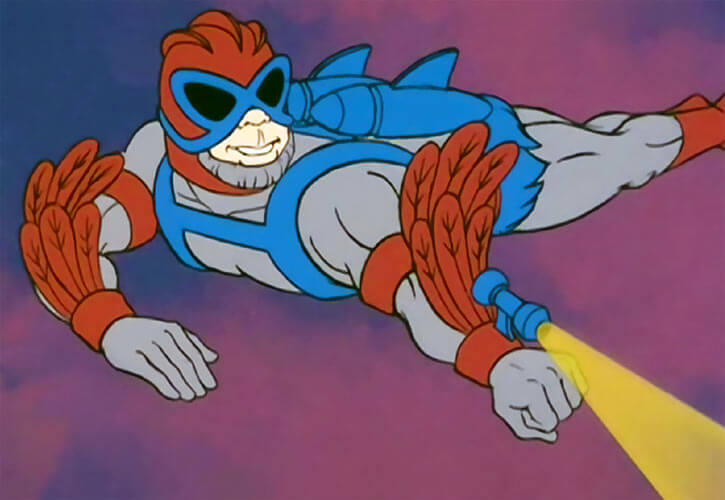 Stratos looks like he’s wearing a vintage aviator helmet with goggles. But his entire race looks this way. It may actually be part of their physiology.

A red and blue outfit shows off his physique. On his back are two rockets that serve an unrevealed purpose.

Stratos is a soft-spoken but confident and responsible leader to his people. Keeping diligent watch for danger.

As with other MoTU heroes, Stratos has little in the way of background.

He has a sister. They are very close but nothing is said of their parents or childhood.

“Ahhh, that one nearly singed my tail feathers !”

“It’s a good thing we were in the neighborhood.”

(Stratos, pursued by an angry Carrock)
“It’s not evil, I invaded its nest.”

(Stratos shivers when he sees several birds in cages)
He-man: “What’s wrong ?”
Stratos: “As a bird-man I have a thing about cages.”

Stratos and the Avions could be another Earth’s version of Thanagarians.

Drawbacks:
Authority Figure (King of Avion), Distinct Appearance, Power Loss (Rare): Flight drops to 00 APs after a few days away from the Egg of Avion.

As they are bird-people they could have some level of telescopic vision. It isn’t revealed in the series.

The Sorceress said the Staff of Avion could destroy half the planet if it exploded.

As I’ve said before distances are weird in Eternia. The characters talk about places being far apart. Yet Beast-Man and others might simply walk from one place to the other. What the Sorceress may be saying is the explosion would decimate a very large area of *their* world. NOTE: If GM’s prefer the staff to be a world ending threat. Raise Bomb APs to 61. 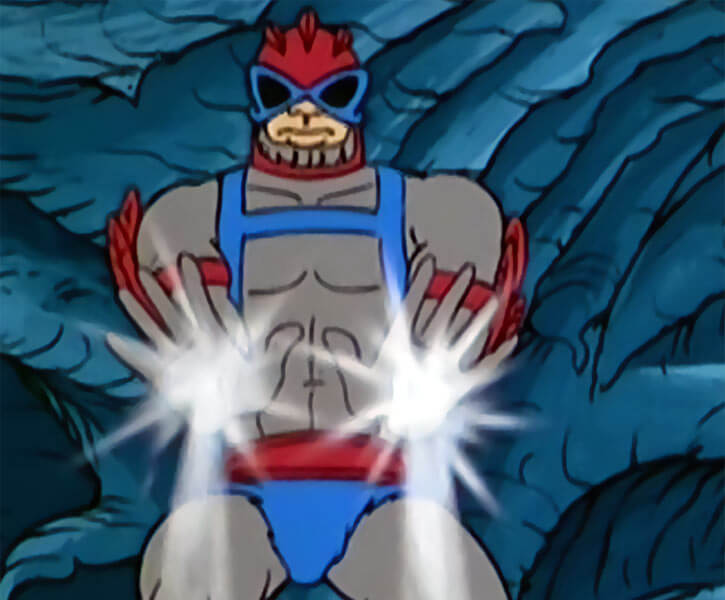 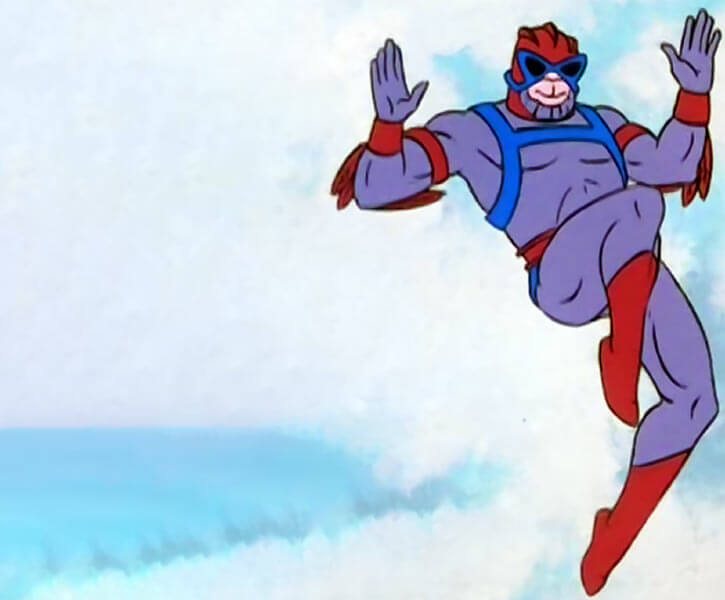