He was a patriotic two-fisted hero working with the young Star-Spangled Kid (stars and stripes, see ?). The gimmick being that the kid was the leader and the grown-up was more of a sidekick.

This specific profile focuses on a slice of his career – his 1999-2000 appearances in the Stars and S.T.R.I.P.E. comic book.

In his prime, Pat was a strongman able to bend steel bars. And a superior brawler.

These days are past, but he remains a large and robust fellow. 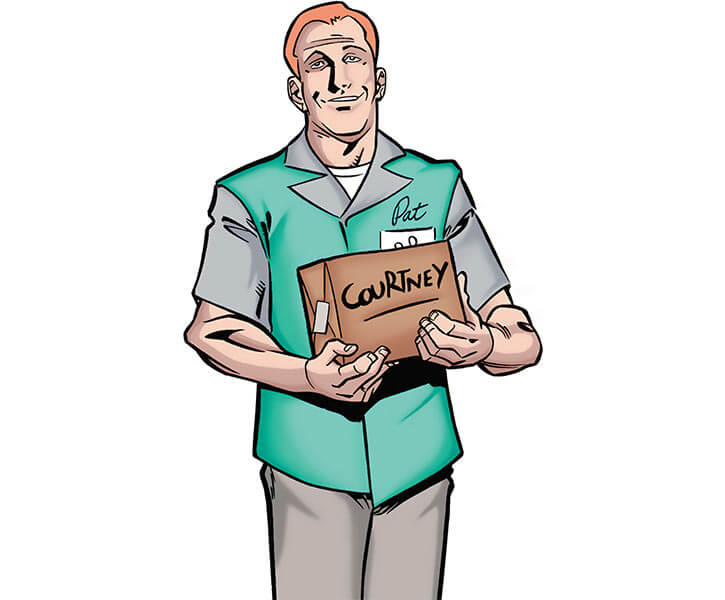 He is also an excellent mechanic and something of an inventor.

Back in the 1940s he designed and built the Star-Rocket Racer, a super-vehicle he and the Star-Spangled Kid (Sylvester Pemberton) used in their adventures.

However, technology has since caught up with Pat. For instance, though he has updated his skills, he’s not a cutting-edge computers guy.

Nevertheless, his old-fashioned hardware is solid. He also has access to parts once used in Robotman bodies – which remain superior to a lot of current hardware.

The main downside of Pat’s equipment is that it takes months or even years to develop, then build using artisan methods and tools.

Dugan works in a basement shop called the Pit Stop. Beyond the parts, tools and mechanical facilities, it features : 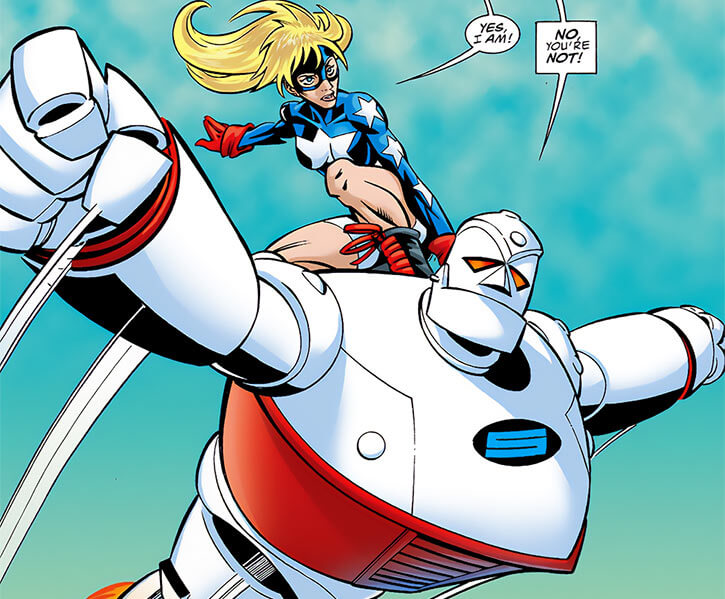 Let the eagle shriek from its lofty peak

While it is not overwhelmingly powerful, it has numerous systems to make it flexible :

The never-ending watchword of our land

The suit is piloted from a cockpit encased in the chest. There is no canopy and all sensory input is routed through a VR helmet fed by various sensors.

The S.T.R.I.P.E. suit has some level of artificial intelligence and a Robbie-the-Robot voice. It will answer Pat’s vocal commands and provide spoken status reports.

When it is booted it will invariably say “S.T.R.I.P.E. online – system ready.”. But not “all systems nominal ”, alas.

The S.T.R.I.P.E. suit is heavily based on a rebuilt and expanded Robotman body, and is often mistaken for a robot.

The suit can extrude two handles from its back, allowing two people to “surf” on its broad back while it flies.

Its thrusters are quite powerful, and S.T.R.I.P.E. can easily carry an ambulance truck while flying.

Being 8’ (2.43m) tall and very broad and thick, it will not fit through most doors. Pat routinely forgets about that and involuntarily destroys door frames.

The S.T.R.I.P.E. suit was later upgraded at Steelworks with the help of John Henry Irons. Aside from faster jet boots, the extent of these improvements is unknown. The paint job was also redone, with a smoother white shell with red stripes. 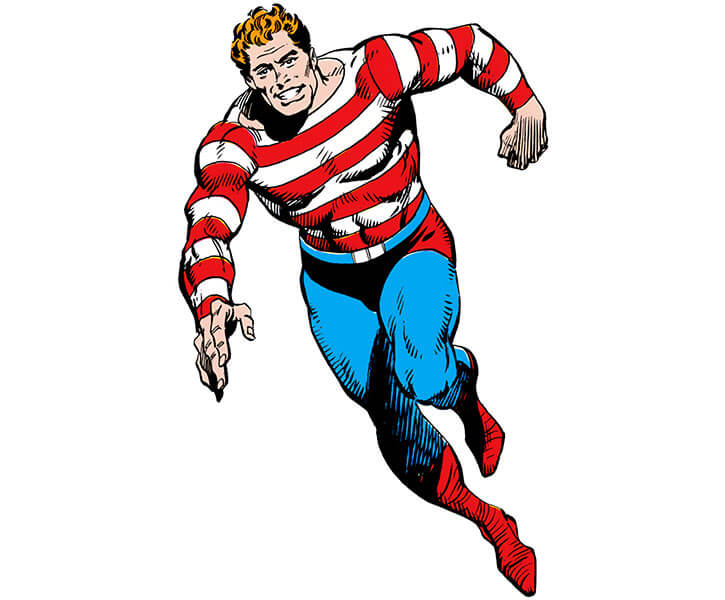 Pat Dugan is a patriotic auto mechanic born during the 1910s.

During the early days of World War Two, he and a wealthy kid named Sylvester Pemberton stepped in to stop rabble-rousing Nazi agents. They soon became an heroic duo – the Star-Spangled Kid and Stripesy.

”The American flag come to life” were famous. Dugan (whom Pemberton hired as his chauffeur) also designed and built the Star-Rocket Racer flying super-car, their signature vehicle.

Stripesy and the Kid joined super-team the Seven Soldiers of Victory until it was dispersed into the timestream by the Nebula Man. Pat found himself in Ancient Egypt for a week until a rescue expedition came.

However, the heroes were from decades into his future. When they brought him with them, Pat found himself in a strange time.

Sylvester resumed his heroic career and became Skyman. Meanwhile, Pat retired as a hero, married and had a son.

However, he was neglecting his family as he spent too much time in his garage. Furthermore, a cousin of his later stole his patents and thus his income source. Maggie Dugan eventually divorced Pat and retained custody of their son.

Pat moved to Las Vegas and opened a garage there. He and Pemberton were now on bad terms, as Dugan had became irrationally jealous of his friend’s superheroic career. However, hearing of his difficulties Pemberton reestablished contact, and rebuild bridges.

Pemberton also compensated Dugan for his lost IP. He further offered him a job as the mechanic of Infinity, Inc. – Skyman’s current super-heroic team in Los Angeles. Pat took the offer. 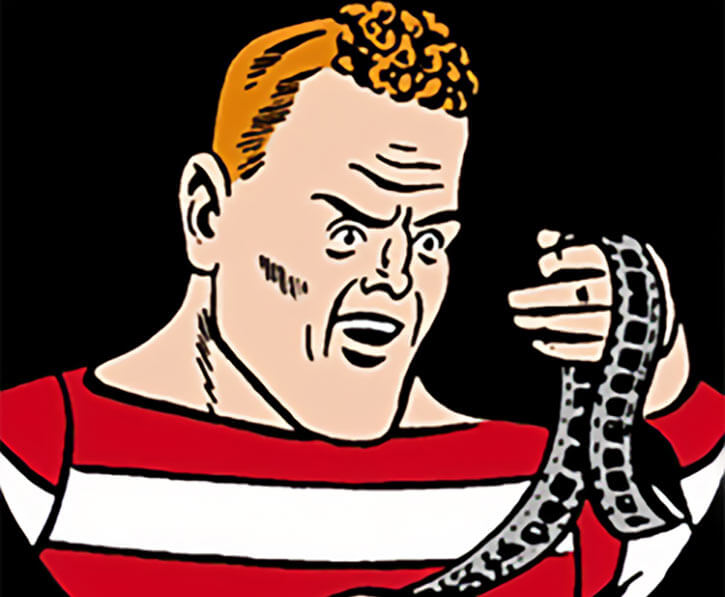 After Infinity is gone

Mr. Dugan stayed in the L.A. area. He apparently made most of his income by restoring and selling classic American cars.

He met and eventually married Barbara, a divorced mother of one from Beverly Hills. This roused the ire of her teenage daughter Courtney.

Following reports of troubles in the Nebraskan burg of Blue Valley, Pat and family moved there so he could investigate.

In Blue Valley, Pat also started assembling S.T.R.I.P.E., a mecha/power armour suit that he had been designing in Los Angeles.

Within days of arriving in Blue Valley, Pat’s angry stepdaughter Courtney accidentally discovered his past as Stripesy. Still wanting to chase him away from her mother, she provoked him by making herself a Star-Spangled Kid costume.

A school event was attacked by strangely-garbed operatives. During this crisis, Courtney discovered that the belt she had found in Pat’s stuff gave her superpowers. The new Star-Spangled Kid and Pat, flying the S.T.R.I.P.E. armour, stopped the attack.

They thus operated together, continuing to investigate the mystery in Blue Valley and intervening in various crises.

Carry on, my wayward stepfather

During the Day of Judgement events, Pat joined Captain Marvel (Billy Batson) and Starfire (Koriand’r). The trio recovered the Spear of Destiny in space so it could be used against Asmodel, who was possessing the Spectre.

Pat further helped prevent the demon Etrigan from stealing the Spear once they were back on Earth.

Mr. Dugan also rebuilt bridges with the Justice Society of America. He built their Steel Eagle supersonic jet based on plans by his friend Ted Knight (formerly Starman). Then trained Atom-Smasher (Al Rothstein) as the main pilot and alternative mechanic for the Eagle.

In 2000, Pat’s son Mike got himself kicked out of the military academy where his parents had him enrolled. Mike came to Blue Valley as he wanted to be the new Star-Spangled Kid.

That did not work out. Courtney kept the identity and the powers. However, Pat indicated that he was working on a new S.T.R.I.P.E. armour/mecha that Mike might eventually use to succeed him.

Pat and Courtney eventually unearthed and defeated the mastermind behind the Blue Valley mystery – the Dragon King. During the fracas Barbara learned of their activities, but agreed to let them continue.

Barbara also announced that she was pregnant. Furthermore Courtney let it slip that, after a very disappointing reunion with her biological father, she now considered Pat Dugan to be her dad. 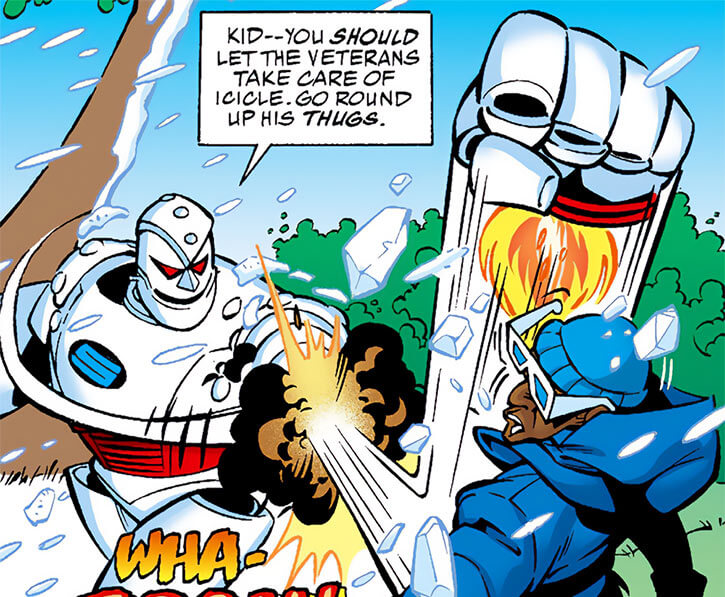 Pat remained a reserve member of the JSA. As S.T.R.I.P.E., he was called to service during crises (Princes of Darkness, the OMAC onslaught, the Black Adam rampage, Infinite Crisis, etc.). He also strengthened his ties with the old timers of the JSA – as well as some JLA members such as Steel (John Henry Irons).

Irons eventually hired Dugan for a while. Pat and the family moved to Metropolis during that time.

Steel and S.T.R.I.P.E. intervened to prevent the murder of President-Elect Luthor during the swearing-in ceremony. Irons also helped Dugan with upgrading his S.T.R.I.P.E. mecha as well as the Star-Spangled Kid’s equipment.

The Dugans then moved back to Blue Valley. There, Pat soon had to use the S.T.R.I.P.E. suit to help Courtney fight the Royal Flush Gang, which her biological father had recently joined.

Reinvigorated, Courtney decided to drop the “Kid” from her code name. She became Stargirl. 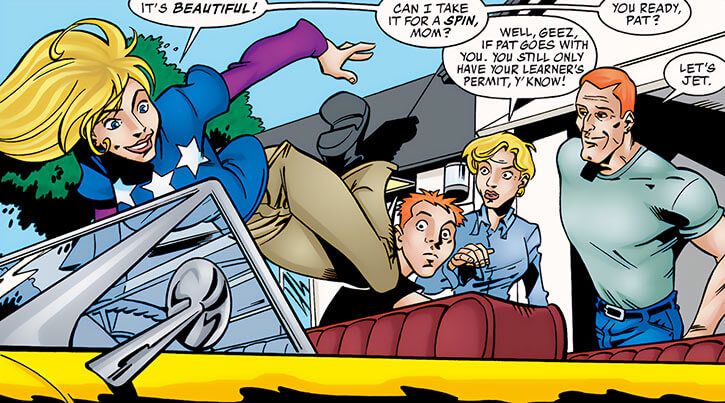 For all his talk about retirement, Pat is normally drawn in his 40s.

As Stripesy, Pat used to be a hot-headed, two-fisted, hard-charging brawler.

He has matured considerably since. He is now an old school guy striving to maintain a better balance between :

Dugan is a time-tossed old-timer. His youth during the Great Depression also left him frugal and prone to reusing old things.

He never was skilled with words, and had no good idea about how to handle the rebellious Courtney. But Pat eventually won her over through simple patience and showing that he was caring and worthy of respect.

The death of Sylvester Pemberton continued to eat at Pat for years, even though his reaction was irrational. These memories made him overprotective of the new Star-Spangled Kid for months, though he started relaxing when she became a full JSAer.

Discussions with Ted Knight and seeing Courtney fully claim the legacy eventually allowed Dugan to put Pemberton’s death behind him.

Courtney: “So you’re going to follow me everywhere ?”
Pat: “I’m not following you. I’m keeping you out of trouble.”

“We could’ve avoided this trouble if you hadn’t gotten into my things. In my days, teenagers listened to adults.”

(Despairing over the uncontrollable Courtney) “And Barbara wants *more* children…”

Courtney: “Where the Hell’d they go ?”
STRIPE: “Watch your language.”
Courtney: “Whatever.”

“Courtney. I know we don’t see eye to eye. But this isn’t about our personal relationship. It’s about our professional one. Your adventures here and with the JSA have proven something. You may have a lot to learn, but your heart is falling into the right place. Sylvester would’ve wanted it this way.”

“I wasn’t Sylvester’s sidekick. I was his bodyguard.”

“As easy as rebuilding a 1949 Dynaflow transmission  .”

(Boosting Courtney’s self-confidence) “You’re what the Justice Society is all about. A hero in training. And you’re doing something no one else on that team is doing. You’re carrying on two legacies — for my old partner, Sylvester Pemberton, the original Star-Spangled Kid. And for Ted and Jack Knight. Both known as Starman before you were given the cosmic rod. So far, so good, kid.” 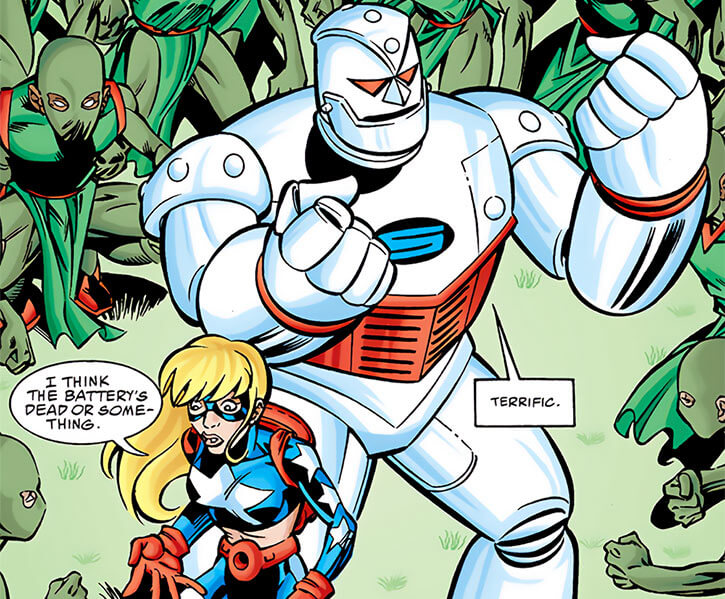 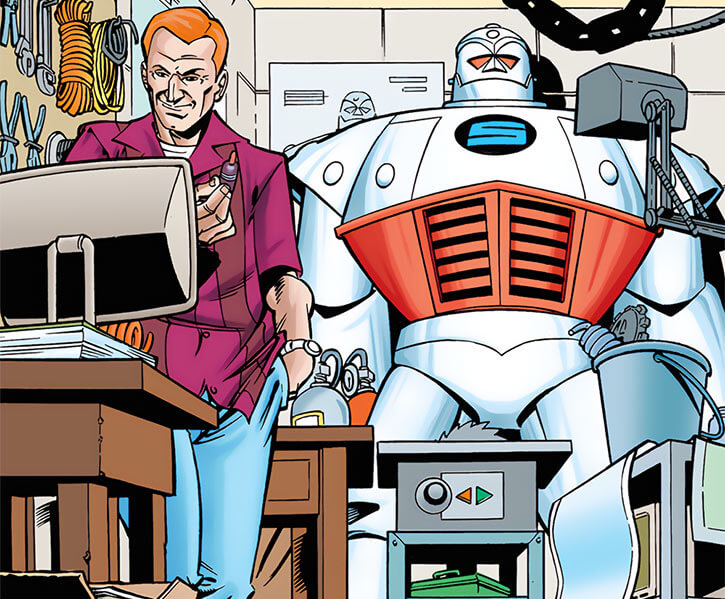 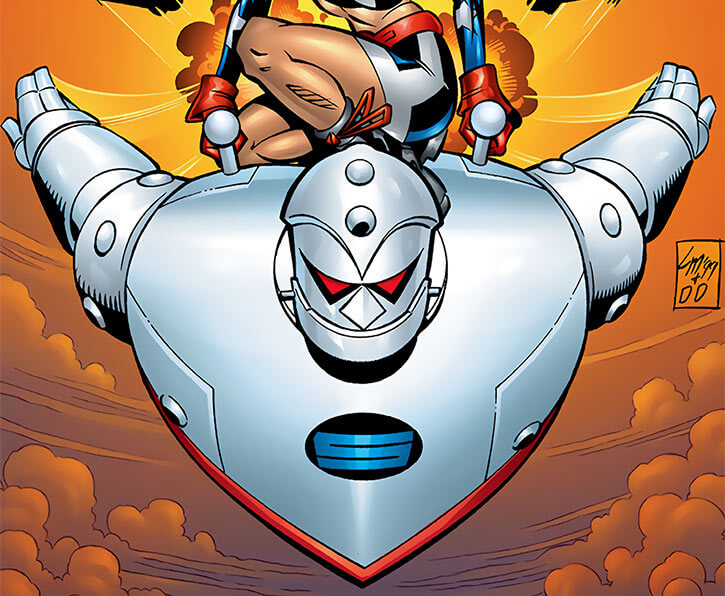 Benefit 1 (Pat is somewhat affluent, even if he does little paying work for a long while), Benefit 1 (the Pit Stop).

I’ve checked his official stats and imported a few things from those, for coherence’s sake.

But as often our power levels are more conservative, since his performance in the comics isn’t all that. They’re mostly fighting hypnotised school kids and never-seen-again street-level villains.