As often with this generation of tales, the depicted future is grim, violent and dismal. Johnny Alpha, the protagonist, is part of the persecuted mutant minority – though he’s far less disfigured than most of his kind. He works as a “Strontium Dog”, a sort of expendable bounty hunter tasked with the most dangerous manhunts.

Alpha is a futuristic bounty hunter and gunslinger, with all the skills and attributes that suggests. He’s tough, tenacious, and quite, quite deadly.

In addition, he has a number of superhuman abilities associated with his mutation : he can see through walls, read thoughts, and generate fear in a target.

Supposedly, these powers are generated by his eyes, which emit Alpha radiation, but this is clearly nonsense. Alpha particles can’t even penetrate a sheet of paper. It seems much more likely that Alpha has been granted limited psionic powers, and that his eyes are merely a visible, but unrelated, side-effect of mutation.

Johnny could also pass for dead. The facts surrounding his apparent death and revival suggest he might be able to “play dead” for vast spans of time, but this is unclear.

Alpha carries a small arsenal on his person :

Johnny Alpha is a mutant, doing the only work permitted to mutants : hunting the scum of the universe. The Search/Destroy Agency, better known as the Strontium Dogs, uses mutants as field agents. Command and administration roles are filled by normals, or “norms”.

Mutants in general, and S/D Agents in particular, are viewed with hostility and suspicion by most norms. Few would care to tangle with Strontium Dogs, however, as they have a well-earned reputation as ruthless killers. Alpha is possibly the most formidable of these deadly men and women.

Alpha’s history is a tangled one. He was born John Kreelman in 2150, just after the Great War that left Britain a nuclear wasteland, and killed 70% of the population.

John was the son of Nelson Bunker Kreelman, a neo-fascist rabble-rouser who had built his career on hatred of “muties”. Kreelman was mortified when his wife Diana gave birth to John, who had clearly been affected in the womb by exposure to Strontium-90.

He kept him a virtual prisoner in the family home to ensure that no-one would learn of his mutant son.

John escaped from his father at the age of 12, and joined the ragtag Mutant Liberation Front, which had formed to fight for mutant rights; by this time mutants were forbidden to own property, to work, and to live among normal people.

Unwilling to admit he was the son of the man responsible for this oppression, John took the surname Alpha, and fought fiercely and well. At the age of fourteen he led his first guerilla action, and at 17 he was second-in-command of the MLF.

Conditions continued to worsen: Mutant Labour Camps were established, in which mutants were forced to perform slave labour under horrendous conditions. Then Kreelman forced the Mutant Extermination Bill through Parliament.

Ultimately, Alpha made common cause with Kreelman’s Parliamentary opponents: Kreelman lost a great deal of support when it became public knowledge that his son was a mutant: and through a combination of military and political manoeuvres, Kreelman was defeated, and forced to flee Earth.

The Extermination Bill was repealed, although mutants were still not permitted to live or work outside dedicated ghettoes, such as Milton Keynes. Alpha and his closest allies were found guilty of terrorist crimes, but their sentences were commuted to exile from Earth.

Many of these battle-hardened veterans joined the Search/Destroy Agency as bounty-hunters for the Galactic Crime Commission, and relocated to the Doghouse, a vast space station in Earth orbit. For the rest of his life, Alpha was a Strontium Dog.

At first, he worked alone, but on a time-travel mission to 8th Century Norway he met Wulf Sternhammer, a huge Viking warrior, who became his partner and his closest friend.

Johnny Alpha brought hundreds to justice, including Sabbat, the arch-genocide Necromagus, who had murdered billions; an almost forgotten 20th Century despot named Adolf Hitler; and his own father.

He apparently died, blinded, preventing a horde of demons from pursuing his friends through a dimensional portal. The Strontium Dog was avenged by the young mutant, Feral.

Whom the Dog would destroy

As it turned out, Johnny Alpha was not really dead. He was later revived by the powerful Stone Wizards, as his old mutant partner McNulty sacrificed his life for that to happen.

Alpha came to lead a mutant rebellion in a new civil war in Britain.

Alpha is a tall, athletically proportioned man, who could be of any age between 25 and 45. His hair is thick, dark brown and curly, and his features are rugged, with a much-broken nose and a pocked, uneven complexion. A bit like a young Charles Bronson crossed with Lee Marvin.

His eyes are plain white, except when he uses his powers, when they glow red, or green, or yellow. Many people find his eyes disconcerting.

He dresses for business in green and yellow. Green trousers, and either a reinforced green jacket or a long-sleeved T-shirt, usually dark green with light green hoops. On top of this is his combat rig, a heavily padded belt and bandolier in yellow.

The bandolier crosses his torso from the right shoulder to the left hip, and is usually balanced by that Ezquerra standby, a shoulder pad on the left.

He wears the Search/Destroy insignia on his left breast, a scarlet disk marked SD in an angular script, and is usually shown with two guns: one is holstered mid-chest, while the Westinghouse is slung diagonally from his belt at the rear, it’s grip projecting beyond his right hip.

He tops this distinctive attire with a uniquely-styled helmet in green and yellow.

Johnny Alpha is basically Clint Eastwood in space. He’s the self-reliant outsider who rides into town, faces down the local bully, shoots a dozen desperadoes, and rides away. Like the typical Clint character, he projects an amoral, mercenary character, but is in fact a good man in a harsh universe.

He’s hard-working, loyal, brave, and possesses great integrity and strength of character. And if you go up against him, he’ll shoot you down like a dog.

Alpha would make an interesting contrast to the oh-so-squeaky-clean Legion. He’d be the man who dealt with the dark underbelly of the 30th Century.

Alternatively, he could give Lobo a much-needed Number Four Cartridge enema. 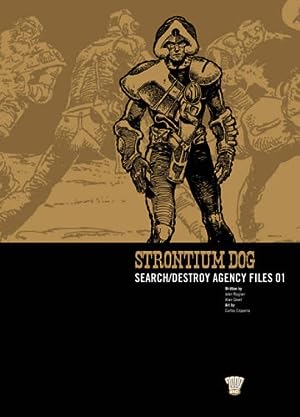 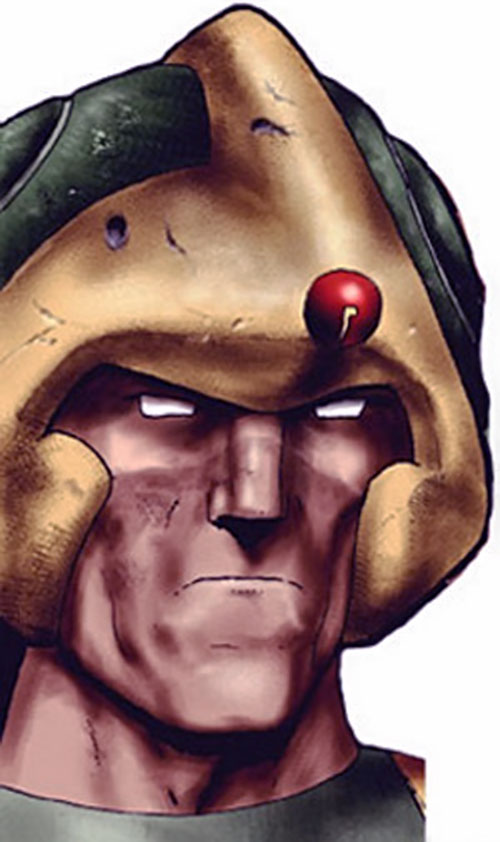 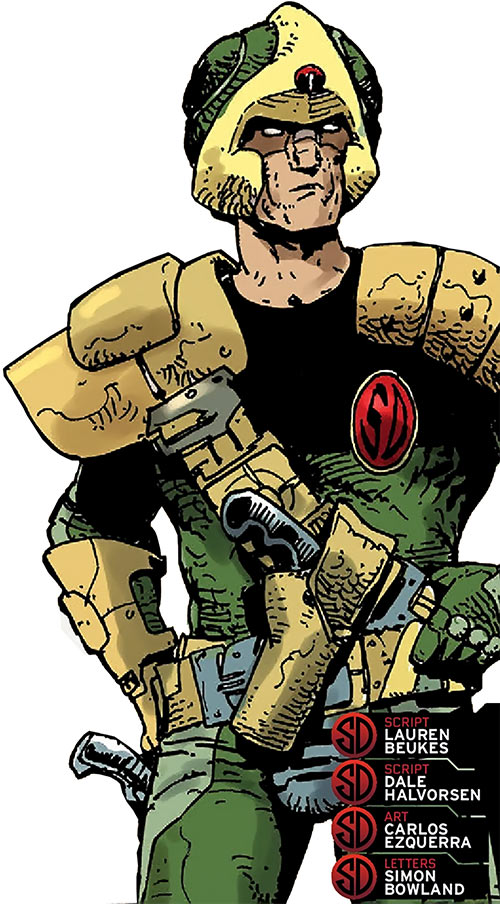 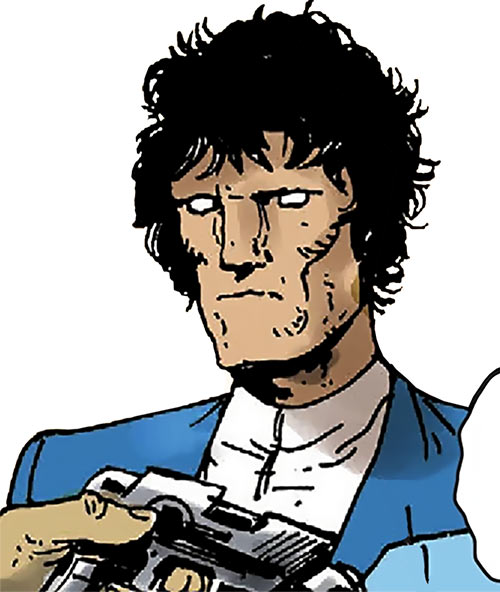