Stupor can instantly analyze a target’s physiology. He’ll work out which nerve clusters to compress to force them to lose their motor control, concentration and coordination. That makes his target appear to be drunk, which also amplifies their emotional states.

Despite his ungainly appearance, Stupor is surprisingly fast and agile.

Stupor was one of the victors of the gladiatorial games held among the enslaved Inhumans by Loki in the 31st Century. He thus became part of the small cadre of Inhumans Loki was grooming to be his personal strike force to help him claim the throne of Asgard .

Just as the time arrived to attack, the Guardians of the Galaxy investigated the Inhumans enslavement. This brought them into conflict with the Inhuman Assassin Squad. Stupor joined in the torment of the captive Guardian Talon, which was cut short when the other Guardians arrived.

Stupor easily disabled Charlie-27. But the Inhumans left the battle as Loki called on them to join him in his invasion of Asgard.

Attacking Asgard, they made significant headway against its defences, until the Guardians arrived to oppose them. When Woden, son of Thor joined the Guardians, the Inhumans and Loki were soon defeated.

They were banished to The Black Canyon, an inescapable prison nestled between Niflheim and Muspelheim.

Stupor takes pleasure in making fools of others, leaping over less nimble opponents, and turning all enemies into fumbling idiots.

“The name’s Stupor, you big clod… and you’re about to find out why !”

Stupor’s touch can affect a target in such a way as to make them act as though they were drunk. He makes a physical attack using his Flash power, which, if successful, reduces their Dexterity, making them uncoordinated. If the Flash is successful, he automatically makes a Broadcast Empath attack, inducing the victim into a highly emotional state.

When he attacked Charlie-27, the attack left him overly aggressive, lashing out at his team mates. But the effect could differ according to the target, leaving them crying in a corner, trying to hug everybody, babbling away importantly about nothing in particular, or whatever the GM decides they should do. 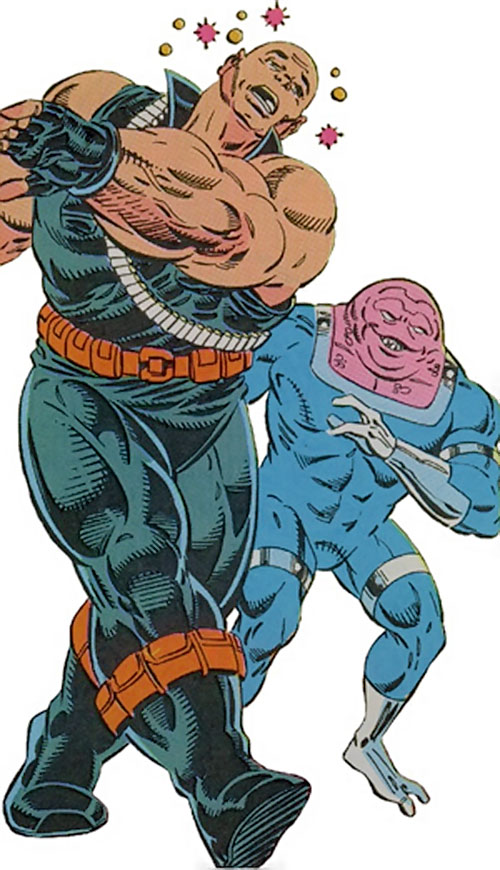