Sublime is a Gen-Active 2nd generation. She was given the synthetic Gen-Factor compound that Ivana designed to give powers to her guinea pigs.

She can turn parts or all of her body completely intangible or as hard as diamond. However, if she uses both at the same time, there’s a median part that has its normal density. Knowing where to hit could bring her down as any other human.

Prior to join I.O. she was already a top martial artist, either bare-handed or armed.

Rachel was born in Chicago, in a rich family. Her parents were constantly making a fuss about her. They didn’t want her to go in college further than Illinois or they would refuse to pay for her school.

That’s when the government proposed her a bargain. She joined I.O.’s training program just to gain independence from her parents – and to piss them off.

She manifested her power at the same time as Evo. As he went nuts, with his body getting transformed, he jumped on her to slash her. She instinctively turned her fist diamond-hard and KOed him. Surprised, she wanted to check her hand and it became intangible. She passed out.

Next thing she knows is she got out of her cryogenic pod, due to Ivana’s orders. Rachel was to join her DV8 team as her personal hit team.

Though she first felt she had nothing in common with her team-mates, she, too, understood that no harm would be done to them as long as they kept together as a team.

After Threshold’s desertion and Frostbite’s dismissal, Sublime was put in charge of the team. It didn’t last long. After the Slipstream crossover, she left the team to investigate Frostbite’s death.

Before going, she insisted on making it clear to the other (particularly Freestyle and Copycat), that she had to do it on her own. This way, she thought Ivana would specifically blame her and leave the others in peace.

She was wrong. As soon as she arrived in Frostbite’s hometown, she felt the setup. She found him tagging along the I.O.’s dissidents. She joined the group.

But Ivana was not to let things happen so smoothly. Baiul started to torture Evo, hoping Sublime would somehow know it, and would understand she had been very bad. Or she hoped the other would finally reveal where Sublime was (as if they knew it).

Unfortunately, the DV8 series ended there.

Sublime is a striking young woman in her late teens. She has blue eyes and long blonde hair she ties in a classic bun. She wears blue lipstick. She has her experiment number (29) tattooed on her right shoulder.

In fights, she wears tight-fitting black/blue tiger-striped pants and T-shirt. The T-shirt is just long enough to cover her breasts and reveals a red shining sun tattooed around her belly button. The blue of her outfit matches the one of her lipstick, of course.

Issued from a higher social class than the other DV8 members, she behaves in a posher way. Though she can pretty often have a contemptuous attitude, she is a team player.

As a bombshell, she has to constantly deal with the boys’, and particularly Evo’s, heavy attitude.

“What can I say ? Don’t expect me to apologize for being born into money.”

Well basically they’re a bunch of freaks, thugs and psychopaths (sorry, anti-heroes) so I suppose they’d be dandy as the new group from Mento, after he lost control of the Hybrid. That would make them foes of the Titans, which is quite fitting IMHO. 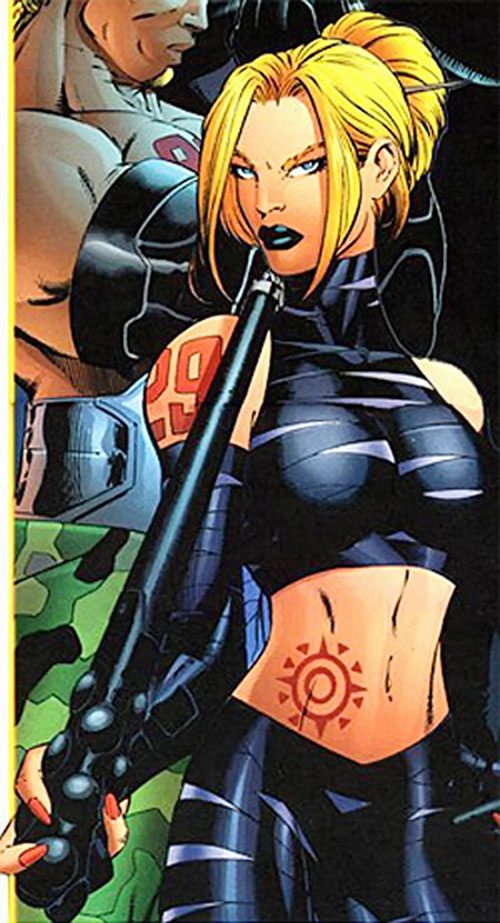 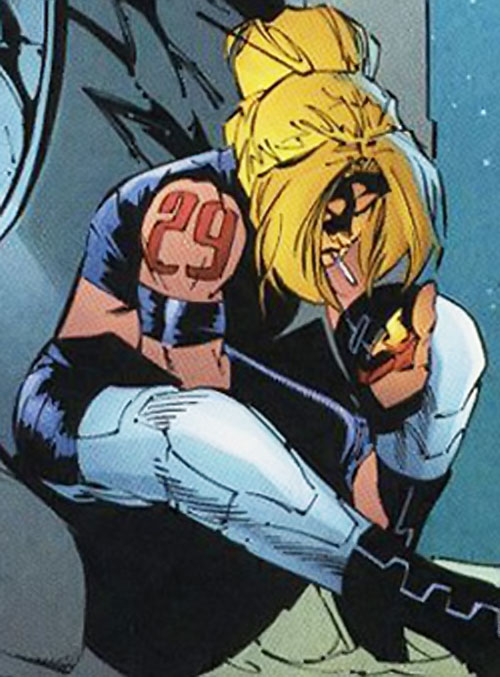 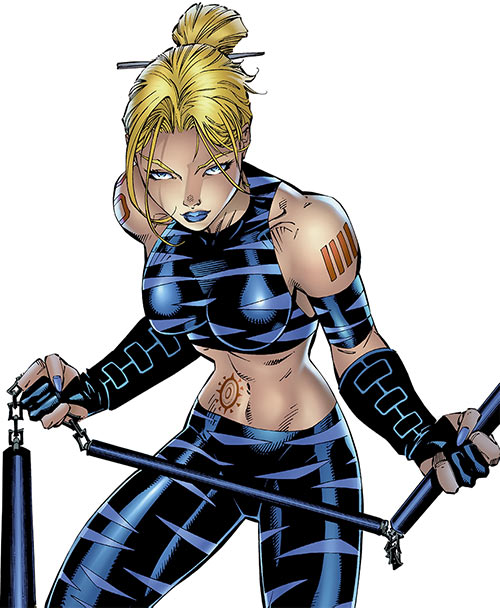