This profile includes S P O I L E R S. And discovering the story is important to gameplay.

Though she’s still a teenager, Miku is a capable maritime survivor. She knows first aid, she knows how to maintain a small boat with an outboard motor, and she has significant salvaging experience.

Though the game has no survival mechanics she presumably knows about fishing, desalinating water, protection against sunburns, etc..

Miku is a remarkable climber, in part thanks to her modest mass. She can climb tall building facades without fail. Mature ivy-like plants growing there can support her weight, as do downpipes. She has no fear of height and certainly can do more pull-ups per minute that I can, but I’m more than thrice her age so shut up kid.

Her most precious resource is a small boat with a small outboard motor. Either finding fuel is abstracted out in the game, or it doesn’t need fuel. The boat could hold three fishermen or so.

Most of the backstory is told in simple, child-like drawings. Most drawings have one word written in an imaginary alphabet. Though transcribing it to Latin alphabet is easy, each word is only four letters long.

For instance NDHL, from context, likely translates to “need heal”, i.e. “I’m looking for medical supplies”. Or WESD to “we sad”, i.e. “our family is grieving”. So even with everything transcribed, there’s room for interpretation.

Miku and her family lived in a fishing village on stilts, somewhere in the ocean. However, her mother was caught in a storm and drowned.

Her father couldn’t handle their loss, and started drinking heavily. It was apparently Miku who started feeding and looking after her younger brother Taku.

One day, an angry Miku smashed her dad’s ethanol-making equipment. In an alcoholic rage, her dad attempted to stab her. Taku tried to defend his sister and was run through. Miku could stabilise the wound, but Taku remained weak and delirious.

Miku took Taku with her and fled blindly aboard a small boat. They survived some bad weather, and reached a submerged city. Taku wasn’t doing well, but Miku hoped to find medical supplies in buildings tall enough to remain above the waterline.

(Exploration in Submerged reveals some of the backstory of the world. This presumably comes from oral tradition told at Miku’s village. This part is harder to interpret than the story of Miku and Taku fleeing.)

The world was heavily populated. Then something went bad with the sky – possibly anthropocentric climate change. There were gigantic storms, then water levels rose.

There were massive floods and tsunami, killing most people. Survivors mostly remained in elevated sites, such as the top of high-rises.

Something struck the ocean floor, cracking it and releasing an enormous vegetal or fungal entity. It grew alongside buildings, presumably to reach the surface and the sun.

This was apparently the case worldwide, as the vegetal mass spread quickly. Most survivors in elevated points were slain by “the mass”.

Over time, water levels receded a bit. But much of the world remained submerged.

Miku’s village may have been created by people who fled from “the mass”. For unrevealed reasons the village didn’t seem threatened by it. Perhaps it was in an area that “the mass” couldn’t expand into.

“The mass” then started “copying” animals and people. This apparently was done by infecting them with a copy of “mass” genetic material, turning them into fungal constructs.

These new lifeforms became the dominant ones, living atop ruins like Humans before them.

But over time, the cities crumbled and fell into the sea. Perhaps the weight from “the mass” and its creatures, plus roots or mycelium boring through concrete, accelerated this collapse.

Eventually, only one ruin was left that Miku’s people knew of. It was somewhat close to their village, but apparently not close enough to make salvage expeditions worthwhile. Or perhaps the survivors feared that entering ruins would reveal their presence to “the mass”.

Though there was vegetation on the buildings’ wall, it apparently wasn’t as overgrown as others. This too might hint that the general area makes it more difficult for “the mass” to spread.

In the ruins, Miku explored to find medical supplies, fire-making equipment, water filtration resources, etc.. She thus could build a sort of base to keep Taku safe and alive. 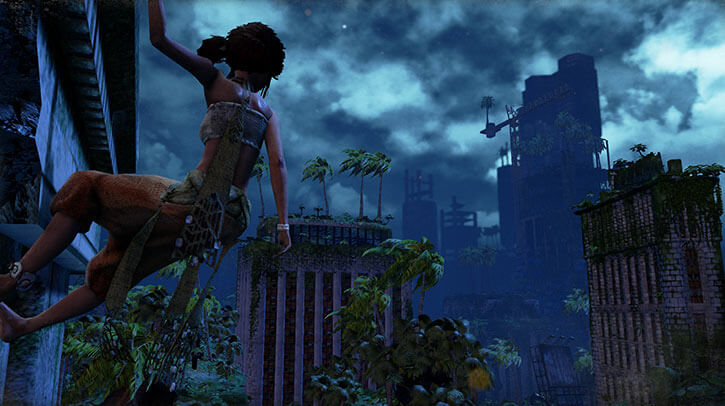 (Said supplies are all found on roofs next to bright red tarps, and have working rotating lights. This suggests some sort of airborne relief effort, perhaps by helicopter. The supplies are in cluster that have mostly been opened and used, but not entirely. This might suggest these had been airdropped not long before “the mass” came.)

It soon became clear that the fishes and birds weren’t real ones, but made of vegetal or fungal matter.

Likewise, Miku soon glimpsed plant people living in the ruins. Though she was scared at first, they were clearly avoiding contact. Whenever she tried approaching, they fled.

However, Miku noticed after a few days that fungal-like growths had started over her hands and feet.

She also began coughing as the fungal covering spread, and entered her lungs. 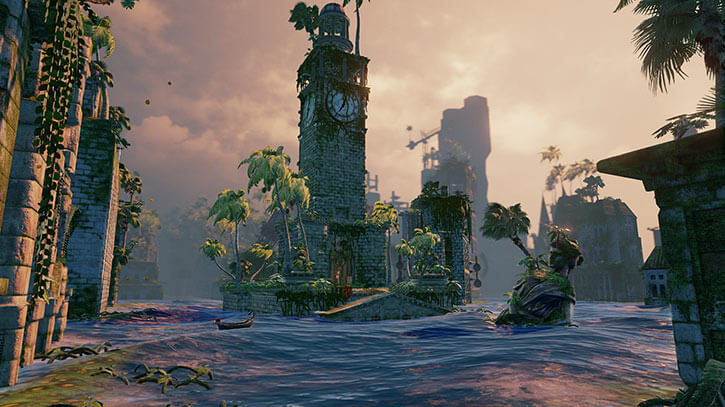 As the infection spread, some clumps started faintly glowing – making it clear that this was a “mass” infestation. Even the hull of Miku’s boat was getting colonised.

Miku painstakingly forced herself to carry on. Her ministrations were working, and Taku was recovering from his nasty wound.

Plant people increasingly popped up to watch her. Plant dolphins were increasingly escorting her boat. A quartet of plant people even tried approaching while Miku was sleeping, but they fled when she stirred.

As Taku’s treatment was finished and he was now awake, the fungi-covered Miku collapsed. Four plant people then came in, and drained the infestation away from her body. They departed without attempting to communicate further.

Having thus both healed from nearly fatal conditions, the siblings left the ruins. One may imagine that they returned to their village.

Miku seems to be 13 or so. She likely has mixed heritages such as, I dunno, Indian/Japanese. Or possibly Polynesian. But with light irises.

Miku has nobody to talk to – Taku is knocked out, and the city seems uninhabited. But she is focused on saving her brother. 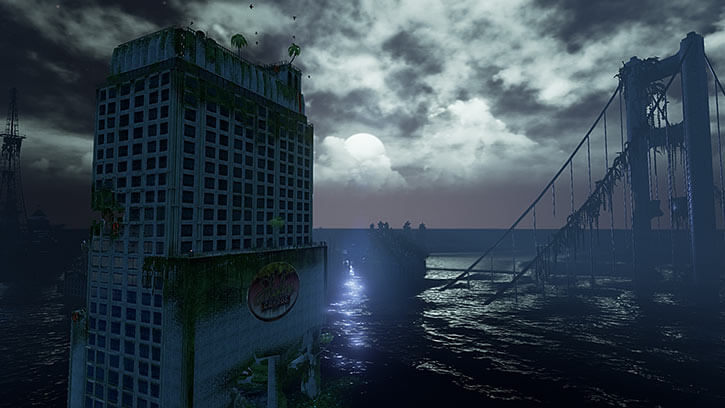 She seems to be a determined, self-reliant lass. Even once it’s clear that she’s infected, she does all she can to help Taku make it once she’ll be dead.

Girl gave names to all the animals

Miku can correctly interpret those ruins that make sense to a low-tech seafaring culture, such as a bridge.

Others will be interpreted in that framework. So a metallic frame pylon is the “net to the sky” and a sleek tower capped with a TV relay is a “titan spear”.

Curiously, when looking at a movie poster with an actress and a robot, she interpreted it as “a princess with a golem”. Maybe Miku’s Jewish.

Amusingly, a statue of a rearing horse was re-christened “the obdurate  creature”.

Miku’s timeline  would fit neatly within that of Valérian and Laureline. And it could more or less fit Waterworld.

Other post-apocalyptic timelines tend not to be submerged. Some, such as Niourk, even lost most of their oceans.

The oldest submerged post-apoc setting I can think of is Ballard’s The Drowned World  (1962), but it takes place much further in the future.

Bonuses and Limitations:
Shrinking is Always On and Already Factored In. Land speed is 01.

Miku presumably has an utility knife and other small tools (fishing hooks, lines, a multi-tool, etc.). She also has a small telescope [BODY 01, Telescopic vision: 02]. Plus a journal, a pen and coloured pencils (or crayons).

And I would assume she has a bag with a few pounds of magnesium carbonate … Cause that sure is a lot of free solo buildering. 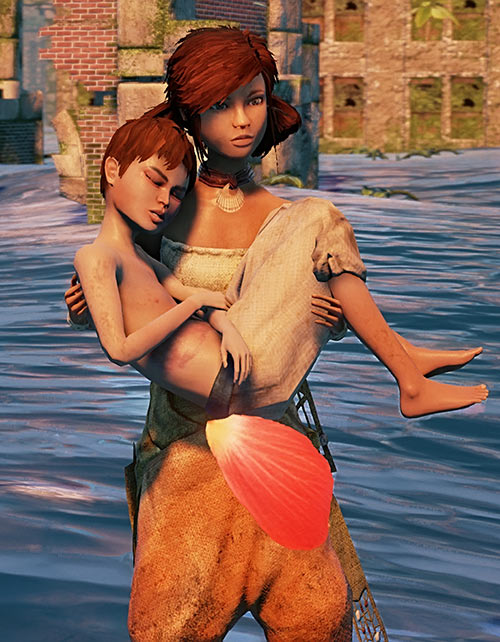 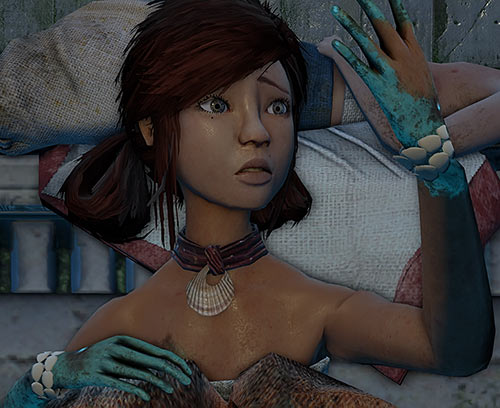